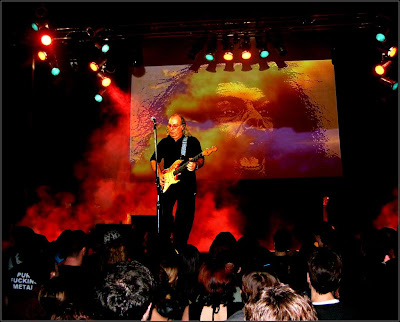 photo by Lamerie - manipulation by oddsocks
The photo above (my favourite) comes from a competition on FlickR run by Lamerie who took the original photo at an EBB rehearsal. All contributions are very clever and or very funny and some are utterly degrading (LOL). Thanks Lamerie and all contributors.
http://www.flickr.com/groups/pscomp/discuss/72157600083505276/#comment72157600110054589
“The spirits” traps a deaf woman, of around fifty, outside her kitchen. They won’t allow her to go in. She has no food in the kitchen. A psychiatrist arranges for food to be bought for her. The psychiatrist, who signs, is one of two responsible for the welfare of all deaf mentally ill folk in the UK. A social worker arrives to find the woman cannot access the food. She can eat it if it is prepared for her and she can eat it outside the kitchen. The woman is mentally very unwell. Effectively she has no one else to look after except for when the social worker visits and access to the psychiatrist every two months. There is little or no help for this woman. Resources provided don’t run to adequate support.

More patients will have to pay 'top-up' fees for private care because of budget cuts in the NHS and long waiting times, a group of doctors say in a report. Doctors for Reform says the idea that health care is free across the UK is now a "political mirage".The number of people working in the NHS fell by 11,000 in the last quarter of 2006, official figures reveal. Health unions said the loss across the UK, revealed in Office for National Statistics, would "inevitably have a negative impact on patient care".
James Johnson, head of the British Medical Association said NHS trusts were under pressure to balance their books, leading to posts being cut.
Warren Town, the Radiographer’s society's director of industrial relations, speaking about proposed Government pay awards said: "This is the first time that any government has staged an increase that is below the rate of inflation and is, in real terms, a cut. "A stand must be taken against the government's move to underpay the people that they claim are absolutely key to delivering NHS targets that they have set. "Morale in the NHS was bad before but this penny-pinching has sent it to rock bottom."
A New labour proposal that vulnerable people be tagged so as to be able to ascertain their whereabouts if they go missing will require far more resources than a bag of discarded ASBO tags. But that is nothing new in so far as almost no New Labour proposals ever see the kind of funding necessary to make them workable.

John Smith paid into a compulsory pension Fund all of his working life. It was a condition of employment. He discovered his employer was going broke 1 year before he retired. Gordon Brown promised he would look into it. John Smith may receive up to 50% of his pension but Brown has renagued on his promise. John Smith killed himself with carbon monoxide gas in his garage on an early spring sunny Sunday afternoon.

Millions of Iraqis have been forced to leave their homes because of the continuing violence in the country. Many of them have fled to Damascus where the Syrian government is asking why the Americans and the British are not doing more to ease the refugee problem. In a recent TV documentary it was clear that The American forces of occupation are fighting a losing battle. Soldiers spoke of there being no end in sight. A sergeant spoke of “not being trained for this” while his men sheltered behind an armoured vehicle as dozens of mortar shells rained in on them. Insurgent violence is on the increase and Iraqis who once were happy at the fall of Saddam are now hostile and resentful. The TV program showed helicopters flying wounded soldiers into hospitals every twenty minutes or so. Injuries are horrific. Major towns once held by the Americans have been lost to the insurgents in the past few days. British journalists have been unable to access areas held by the Americans. It seems that the American hold on territory is so fragile that they don’t want to us to know they are losing the battle for hearts and minds. Gone is the gung ho attitude of young American soldiers. A look of fear and bewilderment seems to have replaced the confident attitude of troops every where. A recent news cast telling how the Americans killed 46 insurgents was investigated by a British journalist who went to see for himself. The news report was found to be totally bogus and in fact the Americans lost some troops not the other way around. It seems clear that vested interests are determined to wage this war regardless of cost or outcome. I believe this war will prove to be one of the most costly mistakes the so called coalition has ever made and it will run on for years.
On a more positive note the sun is shining , summer is around the corner and Scottish Water and Thames Water seemed to have stemmed the flow of raw sewage into the Firth of Forth after two and half days. Residents have complained about the smell from the area for a long time. Rob Kirkwood who is a member of Leith Links residents association claims the the plant has an infrastructure that is basically Third World technology.
copyright e d g a r b r o u g h t o n 2007
Posted by edgar broughton at 14:18

You paint a gloomy picture of the situation Rob but I fear it is near the truth. There is so much media hype and misinformation put out that it cloaks what is really happening.

I can't help but notice the interest the French people are showing in their politics at this time with high polling numbers. I wonder if they have reached rock bottom and wish to see changes or perhaps their politicians have actually come up with something worth voting for?

with regard to these Doctors saying that free health care across th UK is a "political mirage" Perhaps they can show me what they have spent my NI contributions on?, does this mean I can opt out of the system and and pay for private health insurance instead!!! no I did'nt think so.

Hi Guys
I too find the high numbers French people participating in political affairs interesting and they seem to have warded off the far right to some extent.

Regarding the doctors statement I think it is a criticism of Government but you are correct there is no paid for opt out nor will there ever be an equitable return for some people on the payments they have made. Last year 30% of trained nurses had no jobs when they qualified.

Re Chelsea well we wait to see how they fare. It looks like they might get a sniff as usual and then be pushed back to their rightful position among the whining complainers. We'll see.(LOL)

Hi Rob,
I've just been watching excerpts from the Congressional committee in America on Iraq and they've got kids testifying there who have 'served'. Their colleagues and mates who have died have been honoured with medals and military funerals because the politicos have dictated that this is the news that should be given to the American citizens.
In fact, (they have testified) they were ordered by their commanding officers to lie about the circumstances of their colleagues deaths - in fact they were killed by 'friendly fire'.
I want to cry at such cynicism.
Imagine having your kids taken in such circumstances?
I'm mad as hell.
Paul in the Dales

The use of the word 'insurgence' makes me angry. Akin to 'downsizing' when workers are sacked.
It's a convenient word to avoid the term 'civil war' which is what is really happening in Iraq. This so called insurgence is referred to as if it was made up of a group of terrorists who have suddenly fallen from the sky in order to attack the alliance troops and Iraqi people for no apparent reason. In reality it is an ever growing movement of Iraqi people who do not wish to live under a government which is America's puppet and is seen by many as representing only one group of people in a complicated society. We may deplore their methods, we may deplore the fact that they refuse to live in peace but they have their reasons for fighting and they will not simply vanish just because Bush and Blair want them to.
History shows that when people feel they don't have a political voice they turn to violence.
But history is repeatedly ignored by politicians - Bush was warned it would become another Vietnam, he ignored it, Blair was warned it would become another Northern Ireland, he ignored it. Now,the latest bright idea is to build a wall to segregate the factions!! I don't think I need to remind anyone here of the monumental inhumanity that this policy has been responsible for in the past - but once again, the politicians are refusing to learn from history.

Keith, it's a shame that the 2 scenarios you listed could lead to the same response. Who was it who said 'apathy rules...so what!'

I've just been seen by a young doctor, who is in his final year training to be a GP. A lovely chap, warm manner, knowledgable and communicative. Just the kind of person you'd want to be a doctor really. We chatted, and he told me that he was already downhearted, by the state of the NHS, but added that he was going to do his damnedest to not let it get to him, as it was what he really wanted to do. Again, just the kind of person you'd want to be a doctor. I'd like to say this little story ends optomistically, but he ended by saying that he was having to plan for his future a lot earlier than he anticipated, by which he meant that, he didn't expect to be able to stay in the profession, as a permanent career. Caring professionals with no future, and they are the people we will be looking after us when wer'e sick, old, dying. I know I want happy, well paid and well respected for the work they do that most of us wouldn't have the bottle for.

We can't afford free health care, although millions have paid for it for 6 decades but we can afford guns, missiles, bombs , planes, helicopters and nuclear submarines so we can go over and fuck up an already fucked up country. Something wrong here...

If it were all so simple.
If only there were evil people somewhere insidiously committing evil deeds.
And it were necessary only to separate them from the rest of us & destroy them.
But the line dividing good & evil cuts through the heart of every human being.
And who is willing to destroy a piece of his own heart?

Beautiful planet spinning round in space,only problem with it is the stupid human race......
Proportional representation might help folks reconnect with politics.
As for the NHS,I want to see a real National Health Service instead of a National Sickness Service.One that is not in the hands of the drug companies pushing all their symptom suppressors.The causes of these symptoms can be cured by working in harmony with nature,not against it.Another world is possible!All Blessings,Sadge.