I was very surprised, shocked and sad to hear of the passing of David Bowie. He seemed like a man who might roll on longer than a lot of us. He was one of the great characters and great innovators of style and form in music.

Many years ago the EBB was booked to appear at Brighton Dome. The gig was booked by a local promoter who managed a very mediocre local band. David was on first. His Space Oddity was breath taking and I had to go out of the dressing room to check it was just David onstage. There he was resplendent as always with his acoustic guitar bashing out “Ground Control to Major Tom”. He was with Angie Bowie back then. They were an astonishingly beautiful couple. I don't remember much else of what he sang but there, in his show, were the elements of greatness.

The local band went on after his solo show. They were very dull and with out any real merit. They went onstage but would not come off. They over ran eating into our set. Eventually I instructed our road crew to pull the power on them. I only ever did this on that one occasion. We played for a while but because the local band over ran the council officers turned all the power off. We continued Out Demons Out acoustically. David joined us onstage and we all chanted together while Steve tapped out a rhythm. The audience went wild and eventually the police brought proceedings to a halt. A week later David and I received a very official letter from Brighton council informing us that we were banned for life from appearing at the Brighton Dome.

"1973, I ended up in DB's rented Chelsea pad after a heavily-alcoholic record company lunch. He played me some Diamond Dogs demos and said that he wanted Rob to play guitar on a session ... asked me if I had a phone number for him, which i didn't. We ended up calling EMI and trying to get said number, but no-one there had it either, and we were both too smashed to pursue matters further. Who know what might've happened if one of us had been slightly more sober that afternoon …" Charles Chaar Murray

As it turned out Ric Rogers, our manger at the time, told me David wanted me to play guitar on a track called The Candidate. My memory of what happened after that is not clear but I was told David had some kind of mental health episode, probably exhaustion. Any way he went to Switzerland and that was that.

Ric emailed me the other day to ask if I remembered getting dressed up and the carnations he bought for us both to wear at the final Ziggy gig. David admired his so Ric gave it to him. It's funny how some of the little things stay in the memory and others do not. I will always remember the final Ziggy gig in Hammersmith. I remember what appeared to be a look of surprise on the faces of The Spiders when Ziggy broke up the band on stage, announcing it would be their last gig. Any way it was a great gig. The after show party at the Cafe Royale was a lavish affair and we all had a great time. One of those nights when the champagne glass is refilled as soon as it is emptied. 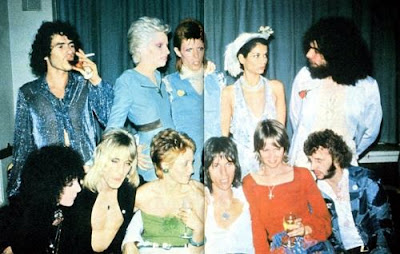 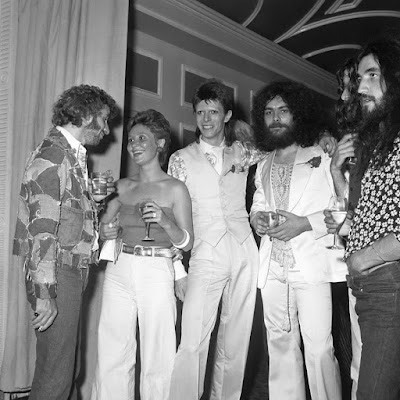 I saw David's show at Wembley Arena in around 75, with Carlos Alomar, Adrian Belew, Sly and Robbie and co. What a band! I remember when David started his first song the PA sound was awful. He stopped every thing and did a mimed ballet dance with his fingers, in a needle spot light on his vocal monitor. If you were back in the hall you would have seen this on a large on stage screen. I was fortunate to be seated near the stage and it was a very clever and elegant thing to do and I could see he knew it. From then on the sound was superb.

Many years later Angie, no longer with David, became a neighbour and we were friends for a while when Luke went to the same primary school as her daughter Stasha. Angie and I used to swop tales of the road and she still liked to party hard. We had some great times. Eventually Angie moved back to America and Lemmy moved into the same rented house for a time. Now he has gone too, bless him.

I think the work David Bowie did in Berlin, on that iconic music, provided some of the most innovative material he made. His broad appeal to a huge audience is partly because he covered all the bases and partly because he never stood still. I especially liked the Tin Machine material. He some times disappointed hard core fans when he refused to play old material. He certainly didn't lack courage. He always brought a huge style and newness to things even when he drew on the material of other artistes that influenced him. Top man! R.I.P.