i wonder what it says in their job descriptions
Over 4000 lesbians and gay men have been executed since the Ayatollahs seized power in 1979.
One wonders why the Dutch authorities could not grant asylum to Iranian Mehdi Kazemi, a 19 year old gay teenager and why the UK authorities had already refused him. While studying in the UK Mehdi discovered his boy friend had been charged with sodomy in Iran and hanged.
Mehdi appealed to the UK authorities to grant him asylum on the basis that he would also be hanged if he were deported. His appeal failed. He fled to Holland. The UK authorities granted him asylum when the Dutch sent him back here.
Why did Mehdi have to endure all that before being allowed a place of safety in the UK? Homophobia is rife in our society but there is law enough to protect gay men or lesbians from homophobic abuse. We should value peoples differences and embrace them. Ok so he is safe now but why the deliberation? How long should it take to establish the truth of his claim? Finally, the UK stepped in to do the right thing and while I complain a great deal about the machinations of our system I am very proud that this has happened.
A spokesperson for the UK Border Authority said – “The UK Border Agency considers each case on its individual merits and will continue to provide refuge for those asylum seekers with a genuine need for protection”. I hope they get it right.
In my work with young people I have encountered homophobic attitudes on a regular basis. The level of aggression in the expression of this prejudice, even in the very young is extremely disturbing at times. When challenged to explain some foundation for some of the most outrageous assertions of homophobic young people I was never surprised with the answer that most often comes back – “it’s in the Bible”.
Sadly Leviticus and other books were interpreted to suit the church and leaders of the day. Often translations misrepresented the original meanings. Recently scholars of the old writings have asserted there are fundamental errors in later translations. In one manuscript they discovered the real commandment known by many as – Thou shall not commit adultery was only referring to infidelity between married people of either gender. So if a married woman slept with an unmarried man this was not adultery. If you examine what might have been the intent behind this it might lead you to consider many things from a new perspective. The commandment – Thou shall not steal was originally written as -Though shall not kidnap.
In writings pertinent to the birth of Christ it is written that the angel foretold the son of man would be born to a young girl. The all-important word virgin is not written anywhere. Still, as it was to turn out Christ was a jumped up, left wing, trouble maker with ideas above his station so if people translated major commandments and sacred prophesy to suit their own ends then perhaps the catholic church decided to bestow some of the attributes of deity to his mother while bestowing on her the honour of immaculate conception. I always struggled with that one. Please don’t misunderstand. I have nothing against the Catholic church that I don’t have against all established churches. I believe the established churches are empty because they are irrelevant and have deceived us all throughout history.
The problem of homophobia is a problem that can only be resolved by education and we have been there before with clause 28. Still, we must oppose this and all similar kinds of prejudice and begin to strengthen our ability to be inclusive. If we do otherwise I think it will be to our long-term detriment.
It isn’t always possible to be safe or effective when challenging poor behaviour and this should always be considered. How ever, we should challenge prejudice whenever we feel able.

For me the past couple of days have been difficult to say the least. I commend the following to those who know and love me best. 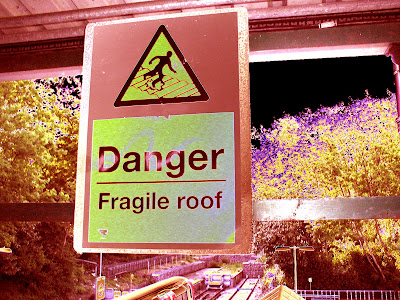 On my way to High Barnet for rehearsals at the weekend I noticed the sign pictured above. It is attached by scaffolding to the roof of the Victorian built walk way over the platforms at the station. It has two staircases leading down to the platforms.
I wondered what avoiding action I might be able to take to avoid any danger in this area. Was there some thing I should do to not add to the danger? Is it just to inform workers they must not run over the roof? If so it's a bit like the ladder with a stop sign three rungs from the top.
The fact is the iron work structure is red rusty and unless it is renovated it will one day be replaced by some thing ugly and expedient. These things are our heritage. They are clues to our past and reminders of a time when people went to extraordinary lengths to manufacture high quality products that were made to last. You can see examples of this kind of neglect in many places, especially where profit rules over common sense in the privatised area of transport.
Actually Barnet is generally looking a bit like a tired and run down British sea side town with out the pier. I should know. I visit Felixstowe in Suffolk quite often.

Well folks Art ( who had his 30th birthday on Thursday ) has decided the winner of the competition wrote the caption > Help! I'm slowly being strangled by a snake pretending to be a scarf! Oz wrote this so, if Oz will email me at edgar.broughton@btinternet.com with mailing details I will send the CD.

The EB Band spent last weekend rehearsing. We looked at a range of songs for a revised set including Death of an electric citizen which wasn’t all that, There’s no Vibrations which was very cool, Night Hogs from Superchip, also very cool, Side by Side ( the whole saga ) from Inside Out which was an unexpected high light for me. We also looked at The Bloom which progressed quite well. It takes time to get the subtleties down. We looked at Ice on Fire which was a bit disappointing. The song does present a challenge as to who will do what. I am sure it will be worth the effort. I had intended to get photos and possibly video from the sessions but couldn’t be arsed in the end. Sorry!

Saturday was slow. My throat wouldn’t relax properly and Steve had a touch of food poisoning. Oh! the things we have to endure. But Sunday was very enjoyable and also very productive.
Steve recently wrote in his blog “It’s funny isn’t it, you can go for weeks bored out of your skull and then all of a sudden, loads of experiences all come at once! Well in some ways the last few weeks or so have been like that in terms of the EB band though it’s probably more to do with opportunities than experiences this time. We have had enquiries about licensing albums in the US, we have begun, at last, to tie up some of the loose ends around publishing and royalties. Some one wants to write my biography ( I don’t really want to) and we have had talks with Tony H and crew about handling our merchandising. We are going to set up a remote page linked to our site where folks will be able to buy our stuff via pay pal etc. We are also discussing ideas for a video for Six White Horses.
Some one has begun work on the new EB Band logo which is some thing none of us have quite got a handle on. It will be nice to look at some elses design ideas. If any of you out there have an idea for a logo please send it to us.
The EMI / Esoteric formerly eclectic ANTHOLOGY set is still in the pipe line so there a re a few irons in the fire.
Ah! nearly forgot some one has volunteered to put a list of 6os - 70s EBB gigs together for the main site.

Next weekend we will be recording and I will get some photos from the sessions.

Re Govt tax revisions - nice one Gordon but will it be enough? 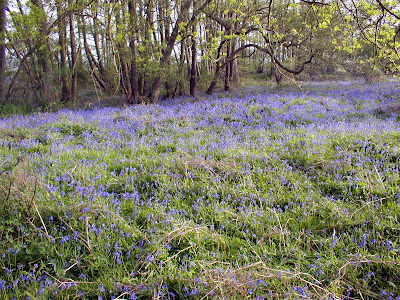 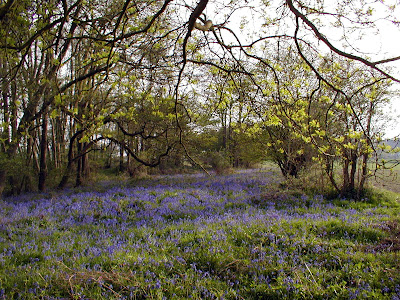 The above photos reminded me of some thing I haven't seen for years. I remember "the blue bell wood" close to Warwick when we were kids. Around this time of year a thick carpet of lush flowers filled the floor of the woods. This is a lovely time of year and it really looks as though the better weather is moving in. Mean while fishing from the rocks and beach is still slow and my hopes of an early, largish sea bass were dashed over the bank holiday. I still had a great time trying and managed to take in a few sights like the one above in between fishing sessions, playing with swords and other favourite pursuits.
So now you know what I do when I can combine chanting ( not at the same time ) with a little sword play by the sea. One of my favourite combos. I make no claim to being adept but I enjoy practising.

Well it wasn't much of a surprise to see New Labour take a kicking. Poor old Gordon must be just a little disappointed with his own and his party's recent performance. The lovely Fern Britten recently interviewed him, giving him the chance to describe " the man who is p.m". He stumbled, spoke briefly about his kids and moved back to where he is most comfortable - making slightly dour, un-enthusiastic comments and entirely unoriginal suggestions as to how he will restore confidence in the party. He almost pleads for more time to get his message across. Some one said to me that it looks like a chronic case of - don't wish too hard for what you want, you might get it. He might well be thinking - it is better to travel than to arrive.
Boris is mayor of London. That might be amusing and who knows he might bring something different ( snigger). Any way I agree with the view that Ken was getting to view the job as a permanent arrangement. They say a change is as good as a rest. Don't they?

The EB Band is rehearsing over the coming weekend so I will be adding a few pics of that and may be a little video in the next post. Mean while Art will be judging your exceedingly silly captions for the photo of his illustrious self.

I noticed the excited little Chelsea upsurge on the comments section of the previous post. It must be very much of a novelty to be in the final. I note that my comments re Man United were met with some surprise. No one likes you as was predicted and you only know how to sing when you are winning( lol). Still, may the best team win is what I say and seriously, if CFC win then they will truly deserve to have done so.