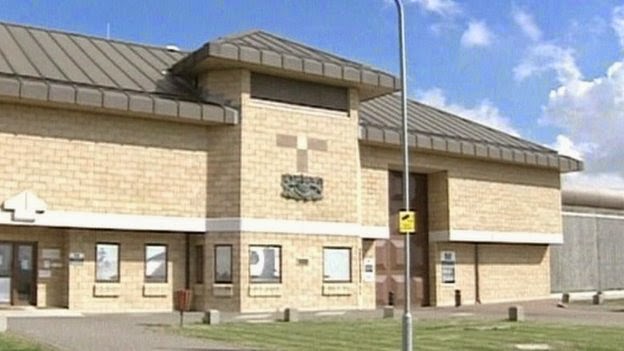 
Yesterday was different. I spent the day in Her Majesty's Prison Elmley and if I am to tell this tale well it will take some time so please forgive the longer read. This all came about after a FDPFAFDW gig at Ken and Gill's home in Sheerness. Ken is Managing Chaplain at Elmley Prison and after a post gig discussion he arranged a couple of workshops in the prison.

HM Prison Elmley is a local Category B/C men's prison, located close to the village of Eastchurch on the Isle of Sheppey, Kent. The term 'local' means that this prison holds people on remand to the local courts. Elmley forms part of the Sheppey prisons cluster, which also includes HMP Standford Hill and HMP Swaleside. The prison is operated by Her Majesty's Prison Service.
Ken had told me that that it had been a difficult year in 2014 due to a voluntary redundancy scheme which left the prison understaffed. In 2014 the Howard League for Penal Reform published research showing the number of prison officers at Elmley and its neighbouring Isle of Sheppey prisons, Standford Hill and Swaleside, had fallen by 300 in four years, from 740 to 340. The figures - supplied by the Ministry of Justice - are mirrored across the public sector prison estate.

For me it was an early start with Ken needing to pick me up at 9am in Sheerness. I decided to stay in a hotel and after a good night's sleep I climbed into Ken's car, on time and ready for work. I confess to being a little nervous. As Ken noted, it was a little outside my comfort zone. A challenge is always of interest to me and the possibility of working with a diverse range of folk is exciting. The opportunity to meet and work with men in prison in 2015 could not be missed.
Arriving outside the prison I was immediately surprised by it's size. We entered and I showed my photo ID and got a key for the mobile phone locker where my phone would sleep for the rest of the day. So there I was entering the inner sanctum of the prison Chaplaincy via multiple iron barred gates and the kind of security protocols you would expect in a prison. The knowledge that I would be released at the end of the day unless I behaved very badly allowed me to drink in the visions of seemingly endless drafty corridors and the general atmosphere. All along the way very busy people went about their work through the barred gates and heavy doors as Ken lead the way to the Chapel. It is a well appointed space with nice acoustics and has a very peaceful vibe. I felt very comfortable in this space. It was like stepping out of a slightly disturbing environ into a calm, safe place.

The morning session was for guys who were already playing guitar or wanting to begin to learn. The plan was to sing a song or two for them and to tell a story or two and jam along with them sharing a few tips and lazy short cuts. Eventually the guys begin to arrive for the session and I turned on my tiny little amplifier and plugged in my guitar. We shook hands and sat in a semi circle ready to start.

One of the guys told me that they hadn't got their guitars with them because either they didn't have time to get them or they had not been told what was going on and that they would be allowed to bring them. This was a bit disappointing and required an immediate adaptation on my part. I told people a little about myself, my career in music and community work and I told a story to give a little flavour around the early history of the EBB and asked the guys what they wanted from the session. It was clear that the lack of guitars at the session was a problem.

I let a couple of the guys play my guitar and sang them a couple of songs. It was interesting to see the faces of the guys playing when they finished and we all applauded. It's something I expect and something they don't get to enjoy while in prison unless there is some kind of performance by them to an audience, however small. This group numbered a dozen but the pleasure on the faces of the players and the sense of satisfaction when we all applauded was a delight for me.
The highlight of the session for me was still to come. The guys talked about the need to come together for a session one day a week. They suggested a Friday or at the weekend. It was clear that most of the group were very serious about playing guitar. One guy had produced a beginners hand book to get fellow inmates started. It is a very neat collection of all the basic chords and scales and instructions around tuning etc.

In terms of time available to the guys all activities are dependent on the availability of a supervising officer and things get cancelled or postponed in seemingly random way. The communication issues around bringing the guitars to the session seemed to me to be symptomatic of this, But what do I know? I know that suicides among young men in the UK is rising.
I know that whatever any one says, conditions for these men are far from ideal and they clearly have less time and resources available to them than is reasonable if rehabilitation through practical support towards a better life is to be a serious objective. I know the suicide rate in prison is rising and there is a high rate of mental ill health among young men in prison This and self harming was highlighted by the discussion that followed my suggestion that the group might work together on a mixed media project focusing on their issues. Several guys mentioned self harming and prisoner suicides. they spoke about writing some songs about this.

This was exciting. I was trying to assist them to find something that might speak to a prison Governor about a possible route  towards a meaningful activity that would have meaningful results and would resonate with most if not all of a prison population and The Home Office. I think the guys identified one very important issue that must be addressed.  see footnote*

Ken suggested the group write to the appropriate officer to tell them how it had gone, what they wanted next and to emphasise the positives of the session for them. All too quickly it was over and the guys had to go back to their cells. We shook hands and I was touched by the thanks expressed by the guys.
I had a cheese roll and a tea for lunch from the Officers takeaway canteen and after an attempted visit to the Music Technology facility only to find it was no longer in use I spent the rest of the time before the next session with a head full of ideas and the words of the guys running through my thoughts. The next group arrived for the afternoon session in the Group work room next to the Chapel.

I ran through an introduction and asked them what they would like to happen. I was getting used to the reality that everyone seemed to have a slightly different idea of why I was there and my idea of why I was there changed with them, I hope. Anyway, I sang some songs which they very kindly applauded and after a chat with several of the guys about their thoughts and ideas it was once again clear that option to bring guitars to the session was not clearly communicated or understood. One guy said that he had left an art session to come to our session. He showed me the art work he was working on. It's theme was the mini mission statement of the prison which is writ large every where.

I thought back to the mornings session. I am thinking MORE. Mixed media men's work and MORE!

I reported on the morning session to the guys with regard to ideas around the self harm, suicide project and we chatted about how design, music, poetry, rap and a bunch of other goodies could be combined in some thing special. They all had ideas and the session buzzed. I sang some songs and then one of the guys sang his song. It was so nice to sit back with the guys and watch the young man play my guitar and sing his own song. It was lovely and we were all moved. Shivers down the spine. It was time to end the session. We shook hands and hoped to see each other again. Of course some of the guys could be moved elsewhere at any time so that might be difficult but never say never.

A short chat with a colleague of Ken indicated that money for development of what had been suggested by the two sessions might be a problem. However there are many paths to travel and I think that it is work in progress. I had enjoyed my day inside immensely. I would love to work with these guys again. So much learning for me and a bucketful of ideas. If I have seemed to be critical of aspects of things so be it. But I would like to make it clear that there are many good people working inside the prison who really want to make a difference and deliver quality service however, they could do much better if they were properly supported and resourced but they are not.  You can't make a silk purse out of a pigs ear.
This said I am ever hopeful that  I will be writing about HMP Elmey episode two at some stage.

* 82 prisoners took their own lives in prisons in England and Wales during 2014, bringing suicide rates to their highest level in seven years, according to the latest figures. Of the 82 suicides, 14 were young people between 18 and 24. More inmates have committed suicide at HMP Elmley than almost any other prison in England and Wales, according to figures released on 23rd January 2015 .The Sheppey jail comes joint top with Wandsworth, where four inmates took their own lives last year.