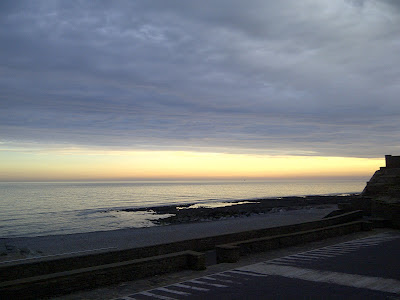 Last week I was in Sussex for the week. We stayed at a very lovely 17th century cottage ( Stable Cottage ) in the High Street of Rottingdean, the home of Rudyard Kipling and other literary and artistic luminaries. Relaxation and a bit of bass fishing were the order of the week though the weather was wet and windy so options were limited. I spent one evening fishing as the sun was going down but the tide wasn’t perfect and weed blown in by a sharp wind made things difficult. So I didn’t catch a thing but I am used to that. It’s fishing and not necessarily catching.
The next day the sun was shining and so I went down to a local beach and chucked a few lures. It’s research and development for a better day and I get to see how my expensive Japanese bass lures work and behave in the water under differing conditions ha ha!. It’s all a bit “boys toys” but very diverting and relaxing, unless I get snagged up and lose tackle.
I’d been on the beach a short time and was setting up when four little girls, who may well have been genuine angels, approached me and began asking very smart and unexpected questions about the “trick fish” as one of them correctly identified the plastic fish in my lure box.
The girls were lovely, bright and very socially skilled for young ‘uns. They introduced them selves and asked lots of questions. Aged between 8 and 9 they represented a future to me that made me smile. They were fabulous little kids who were full of life and light. I was careful to make sure they didn’t get near the hooks on my lures but sadly I was more concerned that their parents or who ever was looking out for them, would not be disturbed by the sight of them following me down to the water Pied Piper style. I needn’t have worried too much as soon a couple of teenaged lads appeared to check them out, and me, and to tell them to stay in sight of their mums. At one point the four of them stood at the waters edge chanting “ Pray for Rob, pray for Rob, pray for Rob to catch a fish”. Eventually they left saying that they hoped I would catch a fish.  Bless them and may all the good things come their way. They were delightful and made my day. They were, in fact, the highlight of the week.

I am looking forward to playing at The Rhythms of The World Festival at Hitchin on Saturday afternoon. I hope the weather is better and we are not wading through a sea of mud. I know it’s always worse for the audience but I hate the clean up afterwards when I have spent the day covered in bits of some far flung field.

Next week I will be filming with a guy I met at the first Mad Pride benefit last year. He is an independent film maker and is making a film around the case of Catherine Hayes. She was a Birmingham lass who with two others, murdered her husband John on March 1st in 1726. It’s a gruesome story that lead to her execution by fire at the stake. She was the last woman to be burned for a crime in England.
I play the executioner carrying the head of the dead John Hayes into court . It should be fun and certainly some thing different for me.


I have been fascinated by the suggestions for the new band name and I wonder what some of you are taking and…can I get some?
The word INTERVENTION strikes a chord with me but I am not yet convinced that any one has come up with the goods yet. So keep on trying. This can run until I get copies of the live album recorded at The Fabrik in Hamburg 1972. The album is in production now and it will be some weeks before it arrives here.

I missed not having a guitar while I was away in Sussex but as soon as I picked up my acoustic guitar on my return I was back in the zone. It is good to take a break from playing and I always enjoy returning to it. It feels fresh and re-energised. I am trying to work up the courage to introduce an electric guitar into the solo stuff but I am still a little short on confidence and the possible options are many. I am working on it and I am beginning to finish off the writing for the new songs bit by bit. I am loving the experimentation that I have been doing with pedals and well, more pedals. Walls of sound and sheets of noise and pretty, pretty melody. It’s where I want to live.
I have been looking at the latest synthesis units for guitar. The advances made since I last looked are major and I am tempted to enter the fray. There is a nice piece of kit called a Kaos Pad which has been around for a few years but the latest model is amazing.
You can transform the sound of any sound, including guitar, by touching the pad in different ways. I am thinking of carving a chunk out of one of my new Squier guitars to fit one.
Ok enough boys toys and tech stuff. I have received some interesting bits and pieces for the KREATIV project but I need more scraps of sound and pics. Please send as attachments to any of the email addresses on my web site.
My book The Instantanium is finished I think, but is a little bit like when I finished my website and didn’t quite have the confidence to upload it for all to see. I have to show the publisher and I wonder if I am ready. Ah well it’s all good and what will be, will be. The year is developing nicely for me and if the weather was a bit better I’d be even happier.

Keep your eyes on latest developments at 38 DEGREES. A current campaign to stop the big Olympic sponsors from getting obscenely large tax cuts achieved 400000 signatures in only a few days. Join in with THE NEW REALITY and make a difference. My spies tell me massive demo organisation is underway for marches later in the year. The bite is on and tightening every day. Resist the cuts and challenge the authority of those making them. Begin now to work towards informing the next leader, who ever they might be, that that they work for us. We need a referendum on the Nation’s Priorities. The old way is busted. We need to get rid of the posh boys and create a new way of governance that will be logical, reasoned and fair. Utopian or feasible? You choose.

John Terry “ It wasn’t racism it was exaggerated sarcasm”.  WHAT?

peace
Posted by edgar broughton at 15:28

Nice reading Rob, esp "Pray for Rob" haha, lovely.
Reg Terry ; "you f* black c*"....at least not much better than Suarez, but both sayings.....stoneage...and not at all what fans of them should experience their idols to say and yell to other people.

Jarle, in case you hadn't noticed, John Terry was found NOT GUILTY, you can choose to believe what you like and I personally have my doubts in what context it was said, but that is the verdict and it should be respected, especially by those members of our great british press who have their own agenda. The fa, if they wish to persue an ungentlemanly conduct route, then they will have to charge almost all of the premier league players, cos from what I see on Sky sports, they are all foul mouthed louts. No question that Terry is an unpopular character, but what would the reaction be now if Terry's name was swapped with Gerrard? i think we know the answer to that!!!

Hi NN.
As you say, he was found not guilty and thats that then.....We have to trust the court to choose right.
If FA want to have a closer look into the material....well thats up to them.
I really hope and believe that either Terry or Suarez are racists, but they and also we must learn that its better to shut up, think and speak than the opposite, speak, think and then shut up....

I hope you mean't to say neither, but I agree with your comments, one of the problems is that we have, on the whole, poorly educated individuals earning vast amounts of money, poorly advised who think they can act as they like and we all know what sort of example that sets for the youngsters watching and in some cases their parents are just as bad. I gave up being a linesman because of the abuse I got from parents, even gave one of them the flag and told them to run the line.

Oh Rottingdean how lovely as Mrs Brown would say!

Perhaps Catherine Hayes husband had forced her to bear 12 children - come on ladies you would want to kill him surely!!!! I like the write up I just read about Ms Hayes which states that although the mother of 12 children she was 'still intimate with the other two men'* suggesting, I thought, that having an intimate relationship with these other men in some way made her a bad mother! Why? 12 children = murder your husband? Maybe not but remember there was no Prozac then. Nowadays she would live the life of a Queen raking in state benefits as a single Mum, enjoying the company of as many men as she chose, why even boasting about it on the bus or yelling sexual details in to her mobile phone, free prescriptions for her Prozac and the promise of never having to work again as she was 'depressed' talk about born at the wrong time!!!!

In 1726 society was pitiful and so it is now. Individuals stand waving an elastoplast at a hemorrhage - new reality? Old reality? Pepsi or coke? can you tell the difference?

These single Mums are only getting what they are entitled to nobody can blame them for that, they don't make the rules. Catherine Hayes was 36 when she was 'murdered' - 36 with 12 children and no real help not a lot has changed really - just the fashions and music.

Edgar Brought and the socialpaths.

er that should be

Edgar Broughton and the socialpaths.

Acute Intervention,might do the trick.

I think I have it and it's Passive Intervention.

Oh dear it's all falling away or so they seemed to want to say!

EB and the Demons?
EB and the Electric Citizens (still my favourite song)?