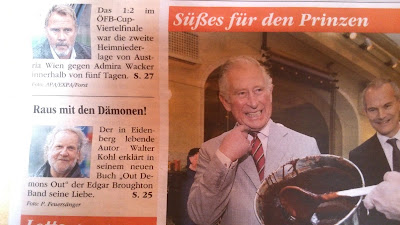 In a few days I will be flying out to Vienna to meet up with my good friend Walter Kohl a well known Austrian writer. We originally met up to discuss his idea for a book, a “faction” called Out Demons Out. Now we are about to appear together at the first promotion events in Austria, for the finished book. I will be playing a few songs and chatting with Walter. It is all very exciting and something different for me.

Walter's idea was to tell the story of his childhood and growing up in post war Austria when the Edgar Broughton Band was looming in the not too far distance and then, when he first heard Wasa Wasa, how that had a dramatic effect on his view of things. The actual chronology of events is not adhered to nor are some of the facts. It is not a biography, although much of my/ EBB history is contained with in it. It is a novel. Actually it is also a novel that contains excerpts from my writings in The Instantainium. 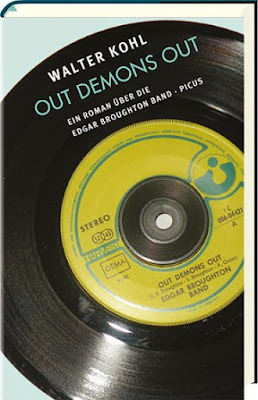 “This one is for you, Edgar had said in the late afternoon, the sun was sinking already, and had stared into the brothers eyes for a long time. And then he started singing very softly. The air was thick like honey. It fell like beginning to melt, the brother said. Inside of me. And suddenly the village was back, and Hilda, and the bricklayer, and all the shit of that time.
He saved us from the village, actually, the brother said, and looked for Edgar.
Yes, said Charly”.

From Out Demons Out. A novel about The Edgar Broughton Band by Walter Kohl.


Each chapter is loosely based around a song title and tells part of the story of Walter's long distance relationship with the EBB and the effect the music had on him and his friends. Some of it is true and some is not. His choice. An intriguing concept.

I spent many hours being interviewed for this work here in the UK and in Austria. I have read a rough English translation which, impressively, Walter made himself. I have made some corrections while being very aware that the writer has to have most control over the finished draft. Fortunately Walter and I operate on similar lines and so this was not a problem. The book is in the German language at this time but we hope it will appear in English soon.

Walter sent me a couple of photos ( see above) from press clippings related to his book. He sent them because the strap line says “Out with the demons” and it is next to a photo of our Charlie boy enjoying some Austrian chocolate. I see where Walter is coming from but as it happens I quite like our Charles. He is the same birth sign as me, a Scorpio, he is roughly the same age and we both have a high regard for the Dalai Lama. He does make the odd gaff though , some thing I never do ha ha! During filming of the gardens at the rear of Buckingham Palace, he was showing the Dalai Lama the wild meadow garden. He was so obviously proud of it. He suddenly turned to his friend and asked him, “So how are things with China”? The Dalai Lama looked gobsmacked. The prince immediately apologised adding “ You can't really talk about that can you”? So it is with the royal one.
To be fair he occasionally speaks out against stupidity and verges on being political at times. Some thing the royals try to avoid as it contravenes their own protocols. It seems he is not a bad bloke on the surface. He certainly seems happier now he is with the one he loves and it looks like the royals have learned some thing from the recent past, especially after the death of Diana.
They have a long way to go to be a so called bicycling monarchy though.

Charles is very opinionated and that is not a bad thing but I suspect the slightly dusty, old school, hard line conservative streak would always have stood in the way of him ever becoming the key board player with the EBB.
I don't agree with his narrow ideas on style, especially architecture and though I can see having a chat would be fascinating I don't think we could ever be mates ha ha! But no, for me Charles is not the demon.
The demon is the despoiler, ravager of the world, destroyer of children, the war pig and the builders of walls that would lock us in.

People often ask me if I can play a version of Out Demons Out on acoustic guitar. It is just about possible but pointless with out the chemistry, magic and innate understanding of the other two. I say two because it only ever needed myself and Art and Steve to drive the thing. I played it with the Glastonbury house band a while ago and decided it would always be a cover version with out the guys so that's it. I won't play it again with out them. It is the one thing played by the EBB that always retained the spirit of how and when we more or less began as a proper band. The song has been through many developments over time right up to the version on the Rockpalast DVD which, is about to be re released.

The date sheet is looking interesting. I have a FDPFAFDW gig in Norway near Stavanger on the horizon with some lovely people I met last year when Luke and I were touring there. I love those gigs and the people who put them together. I have a couple of nice festivals including a return to The HRH Prog Fest in North Wales and one of my favourite bookings at the Real Music Club in Brighton. I expect there will be a few more dates coming in to add to the list. Just enough to keep me out of trouble and in practise.

I love it all except the time spent at airports hanging around and being dependent on others who don't have my priorities or interests at heart. I remember a woman who worked for British Airways chucking a flight case containing Luke's samplers down a ramp to the luggage guys below. The samplers provided all the sounds for the EBB set. Luke's face was a picture and she just told us it would be ok. We pointed out she didn't even take the time to find out what was in the cases. This meant both Luke and I were anxious about this until the next sound check.
I can get quite anxious about getting flights on time but I always make it with loads of time to spare. I have no problem with flying just the waiting around to do it. I became so used to a life with roadies it can be a bit irksome on my own. Happily when I arrive any where I am always looked after very well by people who care.

Easter is nearly over I am happy to say. To me it is just another religious irrelevance taken from the Pagans and incorporated into Roman Christianity by the emperor Constantine to keep order among the various Christian movements and leaders. Sadly the commercialisation of Easter has become more or less acceptable. What annoys me is that we have lost the celebratory style that accompanied the pagan festivals. I would have enjoyed the bawdy, licentious behaviour that would have been the order of the day. Orgiastic and free. Woah!
Having said that the kids have a great time at Easter and that really matters. So ignore what that Edgar whatsisface says. He doesn't like Christmas either. Out Demons Out.