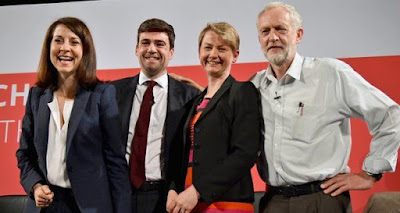 The battle for Labour leadership is on. Neil Kinnock throws his support behind Andy Burnham and warns that “Trotskyite” forces with “malign” intentions are trying to drag Labour to the far left under Corbyn. He says" he understands the “rage” that is compelling many genuine members to support Corbyn, but insists the party must choose its leader with “sincerity and realism”. He warns that a Corbyn victory would turn the party into a powerless “discussion group”.

Kinnock was a total disaster as Labour leader and as for a powerless discussion group, what is else is the Labour Party if it is not just that? The woeful performance of Miliband on television during the run up to the last election was the writing on the wall.  Remember his response when asked if Labour had overspent during their time in office? He answered with a simple " no". It isn't just that of course. Labour has struggled to offer a truly different set of policies based on different principles for years. This Tory government is possibly even more right wing than Thatcher's so isn't it time for a clearly left of centre vision? Scaremongering about the rise of Trotskyite elements in the party is nonsense.

I am not a Trotskyite, far from it. I am a socialist who believes that it is time for balance lest the young forget what it is to have a political party that cares and demonstrates it through radically fair minded, principled policy. At this time there is little hope of that among the Burnhams and others. The spectre of Blair, the warmonger, still haunts the party and it is clear that his success has forced Labour policy into pink impotence.

Today I re-joined the Labour Party. It has been years since I was last a member. I have joined on a monthly basis and if I do not like what happens with Labour over the coming weeks I will resign. The local Labour HQ is just around the corner from me so I can assure you they will be hearing from me at regular intervals.

I have researched the other leadership candidates and I say if we want more of the same pathetic and  weak opposition to Cameron and if you think it was perfectly ok for the Interim Leader of the Labour Party, Harriet Harmon, to vote for Tory welfare cuts then Jeremy Corbyn is probably not the man for you. If like me you think it is time for real change then act now and make a difference.

I am appealing to all of you Lavender Tories. Stop the rot. At Glastonbury Festival, earlier this year, the Dalai Lama said-

“I speak to you now just as another human being. Like you, I too am subject to mental disturbances. Like you I love my life, in fact everyone loves their own lives and everyone has a right live a happy life".

The young will not thank us for leading them deeper into mass apathy and into a place where if a man or woman has nothing to sell they will struggle to exist. This is the sixth richest nation on the planet and still we have food banks, still the poor and disabled pay the most towards reducing the deficit they did not cause. According to Unicef, British children are catered for and cared for less than in nearly all other developed nations. We sit just above the US at the bottom of the pile with Scandinavian countries at the top.
Time for real change? What say you?

Posted by edgar broughton at 17:28

Hi Ya jerry Corbyn is ok and is a change from rest. Might be nice to have a LABOUR, Labour leader.
Reds looking good mate.
Best
Dazza

I couldn't agree more with Rob in the above post with regard to the present way of things. I must confess I am not impressed with any of the Labour leader candidates & Jeremy Corbyn's diatribe at Tolpuddle a couple of weeks back left me cold. But in a best of a dubious bunch he is the only one worth a gamble! He talked about the poor & the disadvantaged & I thought "yep heard it all before"

Our food bank has just moved from a couple of rooms to a warehouse as demand in this town rises. We are taking clothes as well as we head away from summer warmth. We have backing from the Conservatives but not Labour.

Tesco last week announced it was to withdraw certain soft drinks from its' shelves in an attempt to tackle childhood obesity; aww bless, I didn't know they cared! Tesco throw out large quantities of food & when asked if it could instead be given to the homeless shelters they said "NO" . So much for 'Every little helps' Now homeless people go through Tesco bins fishing out the food.

Cuts to welfare - locally we are losing women's refuge shelters even though domestic violence is on the increase. Luckily I have roped in the delightful Julie Felix for an event in October which we have asked for Local Labour party support. We are trying to prevent the closure of a much needed women's refuge & to change perceptions about domestic violenae & abuse.

Need Labour to get in touch with their communities more; with local issues if they are going to turn me on to support them. If people are engaged at local level they feel they can achieve - bitesize politics to get people back. It never ceases to amaze me how people will jam the phone lines to vote on X Factor but do nothing about the issues on their doorstep. But isn't that why X Factor etc was put on our TV screens?

I just joined the Labour Party also. No point whining if we dont join in the debate'
We saw you at the Robin. Great gig and Luke is brill. I just tracked you down and I like your blog. I get it and its tricky to know what to do some times but we cant just do nothing!
Sue Dolan x

People like you lot have to remember that fixing the economy is most important thing to do. The rest can wait. I am a a lavender Tory as you describe. Voted Labour all my life but now I want some one to protect my interests. Too many scroungers and work shy if you ask me. Most bring it on themeselves.

Fix the economy. Delusion. Your new political pals won't do it. It cannot be done. The economic system is in tatters. We should be looking after EVERY ONE not just the few who can hack it. Can't strike, can't demonstrate and it is people like you my friend who make it worse. Principle not profit. Corbyn might not be the perfect solution but as Brian Eno said.
" It seems to me that by focusing so forcefully on electability at any cost, these “realists” have turned Labour into a lightweight, vague entity whose only appeal is that it’s not the Conservative party. When I watched Labour politicians before the election, I saw them tongue-tied, terrified to say anything that could be bashed and recycled repeatedly by the Daily Mail or the Sun. I can’t really blame them given the power and prejudices of the press. But are we at the point now where we decide our agenda for the future on the basis of what the Daily Mail and Rupert Murdoch find acceptable? Unfortunately, for the past few years it has tended to look that way, with progressive politicians terrified to risk saying anything that sounds even faintly like socialism".

Could you define what or who you mean by, 'people like you lot'? Otherwise I will just have to assume you are ignorant!

You lot being the socialist types who probably have a good thing going and don't have to worry about being with out a job or security. I know Edgar says and does good things and tries to get us to look out for the majority but I have done that. It gets you no where. The people have spoken and the Tories lavender and blue are getting the economy back on track. Smear campaigns like the Heath fit up won't turn the Tory tide in my opinion though the left wing press will try.

What are you talking about? Heath fit up? Multiple complaints to wide spread Police forces is not an elaborate fit up whether or not Heath was culpable and that is for others to decide. You cannot assume that people who lean to the left are sorted and secure. The claims by the Tories that the economy is ok are hotly disputed by other experts and there is huge concern that current austerity measures will prove to delay real progress and will be punitive to the poorest.

Well I have pulled over & parked up; I checked to read your reply & WOW! This is truly good news that the Tories are to find jobs & security for all whilst fixing the economy - if only I had known this before the election!

So tell me - who would you side with Goldilocks or the three bears & why? Just think about that for a while - it is not as simple as it might at first seem?

Sally you will have to let us in on the Bears and Goldilocks thing at some point. A full explanation will be very welcome lol.
Sue Dolan

I will do Sue! it is another way of seeing! I use it in my work!

With you all the way on that - one of the most important things in my life has been the LP record - time now for an LP I've never spent any cash on, follow your lead and join.