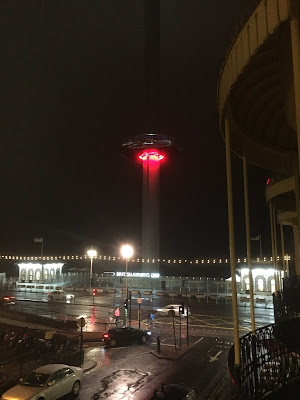 View from a room - British Airways i360 in Brighton

I thought I would take a small break from writing here to take some time out.
How ever, I have been writing new songs and that is going well. I still have a mountain of technology to assimilate and prepare before I can present my 2017 show. It is time to expand the sounds so I have been preparing and recording some components. Time flies by these days and I have to knuckle down over the next couple of months on a slightly new course.

Luke and I are off to Japan in January for two gigs at The ShinJuku Marz in Tokyo. This will be some thing special. I have wanted to see some thing of Japan for ages. Luke says he will go with out food for a week before we leave so he can fully explore the cuisine. We both enjoy Japanese food.
We get a day sightseeing before the first show and the hotel is just around the corner from the venue so, we will have time to take in some thing of the place and have a wander around. I might even get some street fishing in ha ha! After all Japan is where the whole LRF /urban fishing style originated.

Luke and I  will be working together on a show case of vintage material as well as new songs.
Our gigs together in Norway, earlier this year, showed how easy it is for us to play together as well as in a solo mode. Luke knows what I do and has an instinct for what I might decide to do and… he can correct my odd departures from long established chord sequences ha ha!

In November I will be staying with my good friends John and Val in Cornwall. I am playing the Ilfracombe Blues festival on the 12th November and playing with Curved Air at the Cheese and Grain in Frome , Somerset on the 26th of November. It has been a long time since I met up with Sonia Kristina so it will be nice to meet up again.
I reckon I will get some good fishing in between those dates while in North Cornwall as well as some rehearsal and pre production time for the shows with Roger Chapman's band Family in London, in December.

Gigs have become very interesting and diverse lately. The latest example of this came by way of a request from my friend Walter Kohl who is a writer in Austria. Walter has completed a "faction" called  Out Demons Out which tells how the music of the EBB became a part of his youth and how our parallel stories continued to the present time. This is to be published in the German language in April and I will be playing at some performances at promotional events in Austria and Germany in April. While I contributed interviews for this book and some prose, Walter has written the work as part fiction and part fact. While working on the book in London the idea for a gallery style video installation around the interviews came about.  Octavia Schreiner, an artist friend of Walters, made some video of us during the interview and so now we wait to see what might come together in the not too distant future. I love the way one creative possibility can lead to another and more when the chemistry is right.

So life is good and very interesting for me at this time but I am constantly reminded that life for others is not. For example, today the BBC reported “Racist or religious abuse incidents recorded by police in England and Wales jumped 41% in the month after the UK voted to quit the EU, figures show. There were 3,886 such crimes logged in July 2015, rising to 5,468 in July this year, according to the Home Office. It said the sharp increase declined in August but has "remained at a higher level than prior to the EU referendum".

A few weeks ago I was in Brighton for a weekend. Outside of the hotel, on a green, a dilapidated tent was slowly falling apart in the wind and rain. Its inhabitants were no where to be seen and for some time it seemed the tent was abandoned. Later a couple of guys in their twenties arrived at the tent and began looking around. It seemed some tent pegs were missing which explained the tents lopsided appearance. The lads were wet and looked cold. Eventually they disappeared inside the tent. Some time later a couple of men around thirty years old appeared outside the hotel and threw stones and a pint glass at the tent. Then they ran back inside the hotel laughing. I was furious. The lads from the tent appeared and I told them the offenders had gone back inside the hotel. I raced down stairs to report the incident to the receptionist who called her boss, who told her to call the police. They never arrived. The rain poured down outside as the lads from the tent told the receptionist what had happened. She was very nice to them and determined to do something about it. The lads went back to their tent in tears.

Later I watched as the head waiter from the hotel restaurant walked over the green towards the tent. He called to the lads who emerged from their very wobbly tent. The waiter was carrying a tent and a box of food. It was so nice of the hotel staff to do this. An antidote to hate. I was very impressed. The lads were delighted and shook hands with the waiter in the rain as though they didn’t want to let go of his hand.

On the morning of departure I ran into the friends of the bullies and had a discussion with some of them in the lobby. I had my say and questioned their motives. I told them this was a hate crime and asked why would any one want to hurt two homeless people living in a tent? I was wasting my time and as one of them giggled at my assertion that this was a disgusting thing to do I was once again reminded where the nazis came from. The bullies were well dressed and looked just like any other young men any where, but they were not. There is some thing monstrous about their idea that this kind of abuse is legitimate and amusing.

If you are thinking - Here we go again, more gloom and doom then think again. There is an opposite to every thing rotten. The hotel managers demonstrated this perfectly with their gift of a tent and food and to further demonstrate the  power of positivity, I must tell you some thing about Oscar who is eight years old. Oscar’s mum Alex is a friend of mine and she sent me a link to a newspaper article about Oscar. 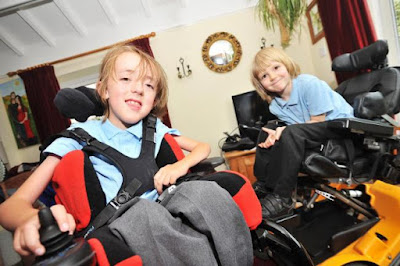 Oscar and his brother Arthur

KIND little Oscar Moulding is on a mission to send a special gift to  help his disabled friend Sophija in Bosnia become more mobile.
The eight-year-old Robert Le Kyng Primary School pupil, who has muscular dystrophy like Sophija, wants to raise more than £800 so he can ship the £9,500 motorised wheelchair he has outgrown to his international pal, hopefully in time for Christmas.
He has been friends with Sophija for many years and understands her difficulty of having a manual wheelchair, which is why he is so determined to help his friend be more independent and able to play with her younger brother.

“I think Sophija will be happy when she gets it,” said Oscar.

What a lovely little boy! Wonderful! The message clear.