My writing here has been a little sporadic over the past weeks. It has been an eventful time one way or another. I got hung up in the maze of digital mastering while working on the re released Superchip. This is now available on major down load sites and has a new song, The Desert Wind which updates the saga, albeit to an increasingly familiar and uncomfortable place.
I had to remaster some songs twice and I had to seperate songs that were joined together on the original masters. I learned a lot and got lost for days on planet digital, in the process. So that is another job done. The album is widely available as a down load but if you want to down load The Desert Wind as a single track go to CD Baby http://www.cdbaby.com/cd/edgarbroughtonband3 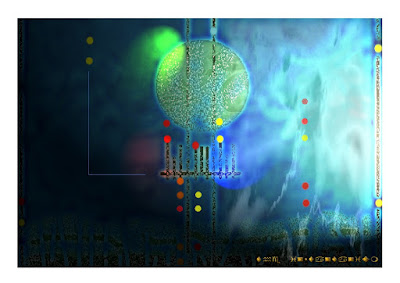 A small competition. I will send an mp3 of The Desert Wind for the best 10 suggested titles for the graphic above. If you click on the graphic you should see an enlarged version. Leave your title suggestion in the comments area below. Make as many suggestions as you like. One mp3 per person. If you win you can email me so I have your email address and the song is yours. Ends on 7th April.

It seems a while ago that I played the delightful Sarah Thorne Theatre in Broadstairs, in Kent. A lovely family and community labour of love. I remember the audience was as warm as could be though the weather outside was bitterly cold. Over the weeks it stirred a small idea some where in my thoughts and so I have been thinking how nice it might be to do a busking tour of English seas side towns in the height of summer. Perhaps a rolling road show out in the streets. This and other random thoughts has lead to preliminary work on a plan for - the electric Fair Days Pay For A Fair Days Work (part 2). It could be fun.

I played a post Disability conference gig for the lovely folk at Mad pride in Bermondsey a few weeks ago and that was a joy to do as it always is. I love the heart of these people and I respect their work for the greater good which is often achieved at considerable personal cost in terms of stress. Mental ill health is still the underfunded service as was illustrated in in a recent report citing the increased mental ill health of young people and the the lack of resourcing for this area of need. Osborne's recent attempt to further penalise the disabled would have been atrocious had he succeeded but still the vulnerable are made to pay. I recently heard of a young man who has multiple seizures every day. He is a teenager so it doesn't take much to see that in order for him to have any quality of life, what can be done , should be done. However, he cannot get essential funding to support his needs because his condition is uncategorised.

I have been working on material for the new album. For the first time ever I have managed to carry out a fair amount of pre production work to reduce time spent in the studio. Making The Desert Wind for Superchip accelerated the work on other new material which was a bonus. I have some weeks free now where I can concentrate on this.

Last weekend was special. I played the HRH Prog Festival in North wales. I must admit I wasn't quite sure how solo me would be received at a prog fest. I needn't have worried it was so nice. The audience was very lovely. I kept to singing songs for the first third of my hour set but decided to include a tale or two as I progressed. They really got it then and I had a ball. Job done. More of that please!
See reviews http://www.festivalsforall.com/article/hrh-prog--sci-fi-weekender-2016-review

So it is back to the Mac and Logic for another song making session. I just spoke with Luke who is also slaving over a hot Mac and we plan some shows together later in the year.
Congratulations  to my nephew Sonny, Steve's son who has just got himself on a three year music production course in Manchester. Bet Steve will be enlisting Sonny's computer music skills big time at some point.

Life is good at this time. Spring is sprung and I hope we get some good weather and tides soon so I can go fishing for sea bass with some hope of catching. I think I'll give the south coast a go soon down Brighton way.

Meanwhile, support the Junior Doctor's strike and lets put a stop to Tory attacks on the disabled and other vulnerable groups. The seasonal marches are planned and listed online– you only have to be there to make the difference. All good.

PLEASE NOTE MY SHOW AT HRH PROG
will be on Friday the 18th
at around 6.40 pm
not on Saturday.