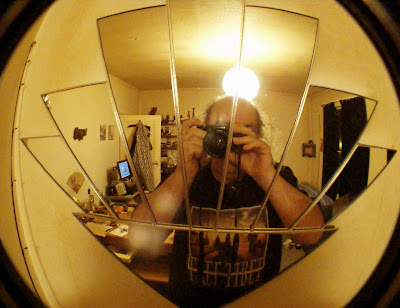 High folks. Thanks to all for the very kind comments on my last post. I’m back refreshed after a very relaxed break from all things EB Band.

Christmas was mostly extremely boring and seemed to be more sadly irrelevant, except for kids, than in other years. I cooked Chinese food for our family meal so nothing traditional there. We did have a nice tree though which Luke decorates. A little bit of Pagan never did nay harm while the annual vomit of Victorian images and Christian nonsense, the huge lemming like flight to the shops followed by the desperate fight to find a bargain at the sales is all a bit embarrassing. Of course it wasn’t difficult to find a bargain anywhere and the shops are still throwing useless rubbish at us for half it’s normal asking price. Isn’t it time we grew out of this Christmas crap and reinvented it? It could easily be some thing meaningful that we could all could join in with in order to make life better for people with less. Christmas – Ba humbug! In the words of a great song “Get back to where we once belonged” ?

The year is well underway now and so I can tell you the EB Band will be back on the road touring Norway at the end of April. Some dates are still to be finalised.

Lots of people are asking when we will be touring in the UK again and I have to say that with things they way they are right now I can’t honestly say. It is quite easy to end up paying to play here in Blighty and we can’t afford to do that. Having said this we will be considering good offers for later in the year.

This year is our 40th anniversary and to celebrate it we will be playing a show featuring our favourites from all of the albums. We will be concentrating on the old songs, playing them as close to the original form as possible. As you might expect there will be the occasional song that gets a new treatment but it will all be aimed at creating the atmosphere of the original. I am finding it interesting that so many of the old lyrics have retained some relevance to me and I hope the same is true for you. I am playing with a list of songs at this time and I have to admit I am keeping a bit of one eye on the difficulty factor and the time that can be reasonably spent on this venture. There is always so many other things that need to be done these days.

Work is continuing on my biog that is being written by Ms Sally Fadelle and I have to finish my novel which is long overdue ha ha !
Luke and I have been looking a fresh at new songs (his and mine) and plotting the way forward to recording them.

I recently bought a new 8 mega pixel digital camera with a few lens filters and gadgets. Loads of features for less money than I paid for my original 1.5 Mega pixel job back when. It shoots decent video too. I am still up to my eyes and ears in video footage and tunes and I will post some thing eventually. I did get hung up on finding out what can be done instead of doing it but I have to have some research and development time these days with all the possibilities available to me to make video / music material on what is fairly basic equipment. Ah! That is my excuse any way.

So it is official. The UK is in recession and it seems folk are already finding ways to change their spending habits and other strategies in order to maintain some security and hopefully a little fun in their lives. Tell me about what you are doing to defeat the CRUNCH in the comments section and I'll send a signed copy of the Rockpalast DVD and the ONE CD to the comment with the most useful suggestion. I am guessing it might take a time for people to realise this blog is under way again so we'll let this one run over a week or two. Same rules as usual as many entries as you like under different names.

Well it’s back to compiling a list of songs for the new show for me. I’m off to explore the eastern coast for a few days at the end of the week but I’ll write this when I can.