Just a quick word or two about participation. It is not mandatory for readers to comment here but it is very easy to do and I would like to hear from you. I would like to hear about your life, your thoughts and perhaps some times a critique of what I write. Plaudits and brick bats accepted with equal interest:)

It is easy to write comments here. You might have to establish you are not a machine, "robot", via a simple recognition device on here, but thats as difficult as it gets. Tell me what is going on with you or maybe, simply say hello. Its not like no one reads this. You know who you are :) 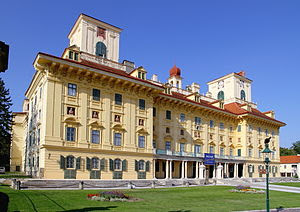 The gig in the pub garden with Bruce Barthol a while ago was very pleasant and the glorious sunshine helped. A very small cooling shower appeared briefly which was welcome. It was so good to see Bruce looking well after recent health issues and good to chat about waters long gone under the bridge and the old times, when were both with Blackhill Enterprises. It was nice to see a few old friends. We should catch up again soon Nigel. Thanks to Ross Hannan and all who made it special. Rambling enjoyed it too and we were back in London by early evening.

So to Austria with my good friend and road manager John Bradshaw. We were playing the twelfth edition of the LOVELY DAYS FESTIVAL at Eisenstadt.
in the castle grounds within the ancient walls of Esterházy Castle.

John lives in Cornwall so we agreed it would be best if he picked me up mid afternoon on the day before we were to fly the head for gatwick to stay in a hotel for the night. It was a good idea and made getting all of the tedious pre flight stuff simple and stress free. We arrived in Gatwick, checked in our hotel and then decided to head for Brighton where we had fish n chips on the beach in lovely sunshine. It felt good. At the beginning of another adventure.

Next day the flight to Vienna was with out incident. We were met by our driver at the airport and on the way to his van I took a dive off a very shallow curb and banged myself up a bit. The biggest worry was my right wrist. I was concerned but hoping for the best.
That evening John and I went to have a look at the gig. It was the soul and jazz day and gave us the chance to check out the place in full swing. We met Paul the promoter and all the main people back stage including the very helpful stage manager Gunter. I love pro set ups and have got used to being looked after very well from a technical perspective. This translates into quick, easy sound checks and glorious onstage sound during my show.

As the evening wore on I became worried I might not be able to play the following day but after a dose of pain killers I slept well and in the morning I was sure I could play. A huge thunderstorm in the night had cleaned the air after a stifling, humid 30 plus degrees. As the worry lifted I began to relish getting onstage.

At the sound check I met up with a guy called Tonto who used to rehearse and record at Wee Mee Nit the studio Steve ran. Tonto  is guitar Tech for Zucchero who was the headline act. Tonto was in a band called Crown Of Thorns. In my opinion they were the best of the bands that passed through Wee Mee Nit. It was very nice to see him and we had a good old catch up as he worked, tuning and cleaning the numerous guitars in his charge. 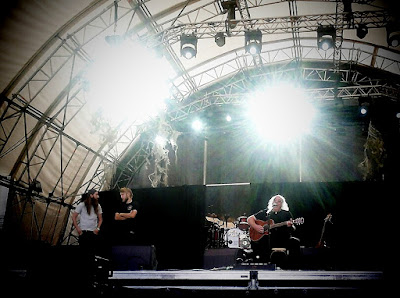 The people poured into the grandiose lawns of the castle and I played my set. I was so pleased with how it went as I was a little uncertain as to how that might work out. I have not played a lot of in Austria.

The aches from my fall were forgotten as I worked my way through the songs. It was a great feeling to see so many young people getting it along with the oldies. I had such a good time I decided to have a wander around out front after my set. I met lots of lovely people who had enjoyed the music down the years and folk who had never heard me before.

It was time for food so John and I retired to the catering area where the food was to die for. Classic dishes served all day with the best coffee in the world. We got through quite a lot of ice cold carbonated water as the temperature stayed up in the 30s. 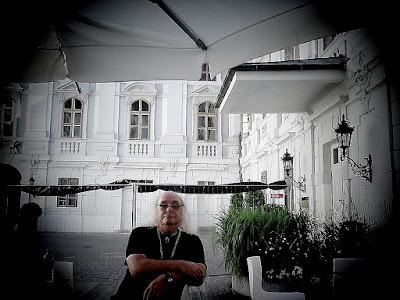 inside the castle   photo j bradshaw

High lights from the rest of the day were The Levellers who reminded me of the EBB in spirit and Uriah Heep who do what they do as well as any one. Still banging, heavy and tight. It was nice to hook up with Mick Box and say hello to the others who I don't really know. Canned Heat were cool and The Doors Alive are an exceptionally good cover band, helped by the singer being a near dead ringer for Jim. I thought Zucchero were impressive if a little over blown but I can see the appeal and why they are so massive in Europe. Not my cup of tea but I get it. 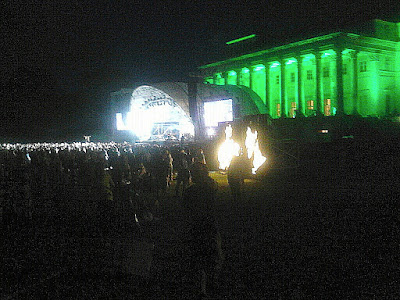 So my fall had not spoiled any thing and the trip had been well worthwhile. John and I had a ball. We were well looked after and the overall organisation was near perfect. This cannot be said about the flight home on the next day. Weather screwed up the entire day and we arrived back at Gatwick 5 hours late. John had to drop me off and then drive from London to Cornwall. He is one of the few men I know who still love driving but before he set off we agreed he should check into  a hotel if needed. I had a feeling he would do the whole trip and he did. A text at around 3.20 confirmed he was home safe. I stayed up to get that text then fell into a wonderful deep sleep for ten hours. Thanks for looking after me mate.

Today I am still black and blue with bruises but recovering and looking forward to my next outing. I will be headed for Slovenia to play a FDPFAFDW gig at the unveiling of a statue to the poet Ivan Volaric, for his widow and friends.