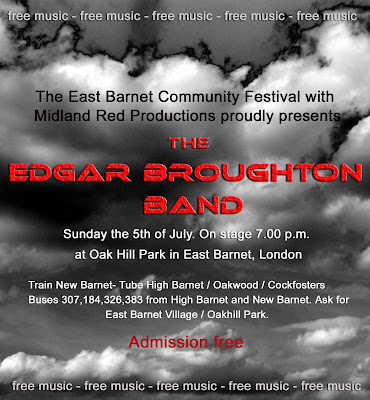 This will be the only UK FREE CONCERT we play in 2009 so we hope to see you there.
Posted by edgar broughton at 21:29 6 comments:

I am still buzzing after the show at the Friars 40th Anniversary gig in Aylesbury on Monday. What a night! We hooked up with old friends from the Pretty Things and Groundhogs and our old mate Arthur Brown as well friends from way back when and from all over. One of the high lights of the night was having some time with Peter Jenner from the old Blackhill Enterprises days when he was our manager. Great to see him and all who turned out for what proved to be a very nostalgic ( I don’t do that much) and emotional evening. Many thanks to David Stopps and his team who made it a night to remember and thanks for the award guys.
I’d like to say a huge thank you to our crew Andrew and Rick who always work extremely hard to make it all happen for us.

So, while we were “fiddling” in Aylesbury Westminster carried on burning and the drip drip of rats afraid to drown with their leader has now turned into a steady stream leaving the sinking ship that is New Labour. After a great deal of thought I have decided not to participate in any election until the opportunity to support real change exists. I used to believe that it was every one’s duty to vote in order to participate in and to maintain the democratic process.
While I feel there is no obvious nor indeed any likely credible candidate to replace Brown in any party, there must be a change that will herald some real and radical reform. I think I can just smell the faintest scent of new possibility some where on the winds of change but I am not sure where it is coming from. What do you think?

Some of you will remember the post I wrote about the disgraceful de-registration of nurse Margaret Haywood for whistle blowing about maltreatment of patients at The Royal Sussex Hospital in Brighton. Perhaps it is no surprise that she is not the only one who seems to have been badly treated by the medical regulatory bodies.
Dr David Southall the UK’s leading Child Protection consultant has been struck off the register by the BMC for misconduct. A mother interviewed by him in the presence of a senior Social Worker complained to the BMC that he had accused her of murdering her child. The medical condition of her surviving child had instigated the enquiry undertaken by Dr Southall. Even though the social worker recorded verbatim notes of the meeting her evidence that the doctor behaved appropriately and made no accusations of any kind were ignored by the BMC and by the High Court at his appeal. I recommend you watch the current Panorama on BBC for the details. I hope you will agree this a shocking injustice. In my opinion David Southall epitomises the kind of Child Protection officer that we desperately need and while his methodology might be considered controversial his success in saving children from the grown ups is self evident. I believe what ever can be done to save the children should be done. Please check it out. I’d very much like to know what others think.