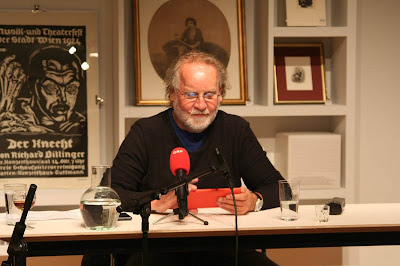 I realise this comes a little late  but I have spent the last few days writing some new material.  I had a couple of days chilling after the trip to Austria which was a total blast. Walter and Christiana looked after me really well and I had the best time. It was good to meet up with Walter and Christiana's daughter, Isolde again. It was a very happy and special renewal of connections made before.

I arrived in Vienna after delays and finally found my driver who took me to my hotel. It was nice being alone in Vienna though I didn't stray far from the hotel. There was a tune running around my head so I unpacked my beloved Tangle Wood guitar and found some chords. No words as yet. On the subject of writing and writing songs, I have had some chords and a chorus for the best part of a year. No verses came to me in all that time but on my return from Austria I felt the muse. I sat down in front of my PC and banged out two pages of lyrics. The song has something of my Evening Over Rooftops style. Anyway it was so good to have moved this song on and I look forward to playing it.

The first reading of Walter's book Out Demons Out took place in the Tunnel, a club near the hotel where I stayed in Vienna. It was an interestingly varied audience with fans of the EBB and fans of Walter. Proceedings began with my singing Red Star and then Walter read from his book. I sang five songs interspersed with the readings. Walter chose the songs and the chapters that he would read. I also read an extract from the book, in English, which is taken from my Instantainium writings. It was an unusual format for me but I really liked the way it worked. There were familiar elements to the whole thing such as a regular PA system and two wedge monitors at my feet but in every other way it was a first time experience. I like that. Walter made the last reading and I sang two or three songs to finish off. 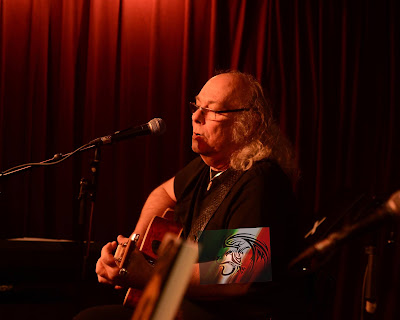 The whole show went down very well and Walter and I chatted with anyone who wanted to talk with us. The publishers were happy and so it was a job well done. For me  there was some relief that it worked out because this was really Walter's gig and I needed to deliver my part as best as I could to properly support him.

Later Walter and I had an amazing conversation with two very drunk fans at the end of it. They were very nice but very inebriated. I lost count of how many times one would say WASA WASA is the best, then the other would say no SING BROTHER SING and so on. It was a good night. Eventually we made our way back to the hotel and to our beds. The drive from Vienna through Linz to Walter's mountain home was smooth and it was good to arrive.
Walter and I had one very late session chatting. That was a remarkable conversation. I really began to understand Walter's own mission as a writer and how, in many ways, we are similar. 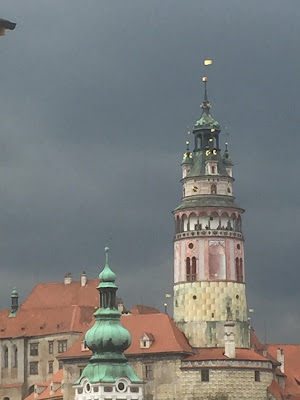 Next day Walter, Christiana and Isolde took me to Cesky Krumlov just inside the Czech Republic. It is a very picturesque town with impressive architecture. We took a little refreshment in a riverside cafe there and looked out over a swollen river, under the great medieval walled banks, as the rain poured down. I kind of liked it more than the snow that still sat around outside the Kohl house. The following day we got together with Walter’s brother, Heinz, and his family for a very fine lunch in a country pub. Later we all spent the afternoon together and renewed our friendship. It was a very pleasant day. 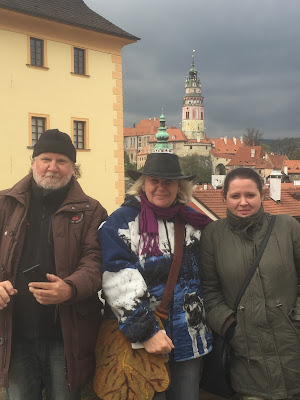 So to the reading in Linz. This is more or less Walter’s home town gig. A bit like the EBB playing Leamington Spa. I knew he was a bit nervous and it was strange for me not feeling the nerves quite as much as I would if it was my gig. Anyway the day passed and we set off for the show at the StifterHaus. This is a Literary / Arts centre in Linz dedicated to the memory of the famous Austrian writer. At dinner after the reading, the director of the Centre asked me if I knew about Adalbert Stifter. I described him as the man who wrote about the woodlands and forests in great detail and cut his throat. It was accepted as a very brief summation of the man. 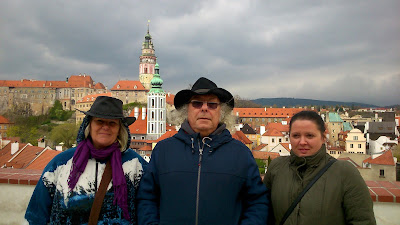 The reading went very well. It felt as though Walter and I had been on the road doing this for weeks instead of only one performance in Vienna. We performed our respective parts with ease and confidence with time for a joke or two. The audience was very attentive and appreciative. There were lots of Walter’s friends and family present and lots of writers, painters and creative people as well as Walter’s fans and mine. It was a very cool way to spend an evening in Linz. 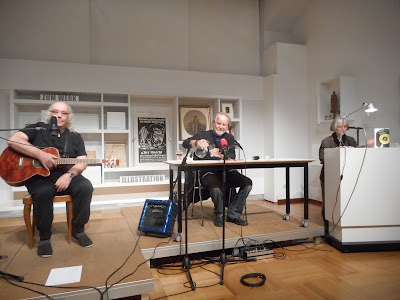 I remember the drive home after dinner. Christiana drove the mountain road back up from Linz and she drove like a roadie, sure and quick. It was a nice little performance at the end of a happy day. A treat for someone who appreciates very good driving. A small part of a very enjoyable trip that will stay with me. I do fancy having a go at descending down the hill from the Kohl house on my bike. It is very technically demanding ( a bit scary!). As for riding up it
( more scary!!), I don’t think that could ever happen .

Next day Walter, Christiana and Isolde drove me to the airport in Vienna and made sure I was sorted out and ready to  head for the departure lounge, bound for Heathrow. I know I go on to folk about how I get anxious and hate the checking in process and everything around getting sorted. Bless them for coming with me it was very kind. I was sad to say goodbye and watch them head back to their car. I was also very pleased that it had all worked out so well and happy that this was a mission accomplished.

I feel sure this is not the end of the Kohl Broughton collaboration and I look forward to what ever might transpire. I hope the book does well and my thanks to all who supported the readings in Vienna and Linz.