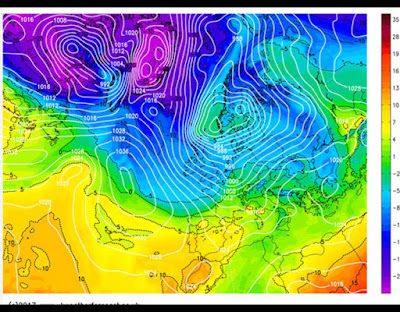 Doris and Donald, a lot of wind and all coming from the west. Trump aside, I am hoping to get some fishing in over the next few days so I hope storm Doris is not going to curtail that.

I have been hibernating more or less all of this year so far which is why I haven't written any thing here for some time. I have been writing and recording lots of music though so I have not been entirely idle.

I have been watching the news from the US and else where with increasing incredulity. The man Trump is worse than we could have imagined. It is difficult to imagine him getting through twelve months in office with out impeachment or indictment. I feel sure it can't be long before some geeky stats nut will tell us Trump has only 25 words in his vocabulary. When father and son were in business together they were legally represented by the law firm who at the time, represented the three most powerful mafia families in the US. His father was busted for a massive fraud related to the building of homes for US service men after World War 2. His father told Donald he was always right and that if any one disagreed to fire them. Unfortunately it seems he would apply this policy to judges and any one else who disagrees with his mad policies if if he could. What might he do to the free press if he could? Senate and Congress can limit potential Trump damage if it chooses to and we can only hope it does.

Surely there has never been a more inept and ridiculous so called leader of the free world.  In the past century there have been two men, both with funny haircuts, who wanted to build walls to keep people out and one who wanted to keep people in. Trump will fail to satisfy the demands of the rust belt and other disadvantaged Americans, by restoring their vanished jobs just as May will fail to satisfy the demands of Brexiteers.

I have said plenty about the underlying darkness that I believe colours Brexit and how I think those who "want our country back" will be disappointed by the final deal. The populist vote cannot be satisfied with out a big push to the right and eventually to the far right. Be careful what you wish for. Marine Le Pen has toned down her fascist rhetoric to satisfy the populist vote but it will return if and when she has power.

On the subject of rhetoric its seems that political speeches have become so formulaic they begin to sound alike. It is infuriating, especially when a little truth and a properly answered question would be sufficient. After a total disaster due to inadequate management and neglect, we hear  " At this time we are thinking of the victims and their families. We are reviewing policy and have already made changes to operational practice. We will do every thing possible to prevent this happening in the future." So it goes as though we are stupid or at least too stupid to rise up and do some thing about some thing, which strangely brings me to Blair.

The man, who some think should be brought to book for war crimes, has re surfaced with the campaign Open Britain. It was very weird to hear him suggesting uprising in the UK. Given his tarnished reputation it was sad to hear him critical of Labour Party performance though with some justification.  On the subject of political speeches I am sure I could provide a better delivery than Jeremy. Opposition to May's blundering is poor. If we had any doubt that she had no intention to deliver on her egalitarian, maiden speech outside number 10, we need doubt no more. The past few months have seen government total ignoring all pleas to do some thing about social care, NHS including mental health provision, understaffed prisons and the list goes on. There is money for non of it only the vacuous promises of the new Iron Lady. Meanwhile the poor and vulnerable suffer more and more as cuts bite hard and there is really no one who truly represents them.

So what of Blair's uprising call? He who spoke very eloquently about Brexit and the state of the nation. A lot of people liked the message but despise the man. It sounds a warning some where deep inside me.

My mind wanders off into a alternative reality where Illuminati pull the strings and Blair is their rep in the New World. Trump's progeny is  Anti Christ and the Bush tribe and his End Timer mates are revelling in the all of the potential destruction possible. They are all good pals and good pals with Putin who is in reality, only a lowly hit man. Considering the little good that any of them have done for the world, it might as well be true. For those End Timers and millions who believe we are living in the end of days there are many things happening in the world that they will interpret as fore told and supportive of their own view of it all. Whoa! Enough of that.

Seriously though, while there is much to be sad and concerned about, there is always much to be glad about for most of us when we look about us and around the world.  A little kindness goes a long way and we can all deliver some of this if we want to. The good and kind will never be an irrelevance even if their leaders are. In these times of austerity and division, we have to stand up for what is right and fair more than ever. We have to reject narrow and negative judgements based on a persons difference. We should resist and actively challenge all who judge and discriminate on such basis or piece by piece we shall see the rights and freedoms we enjoy reduced to dust. The thing that terrifies me most is that though I never thought I would see this in my life time, I fear I might.