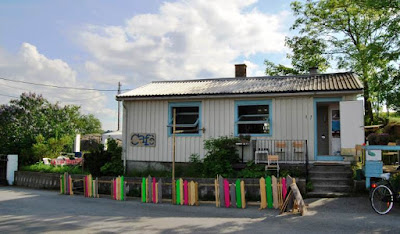 Today is a lovely summers day with a soft  cooling wind wafting through the metropolis. Life has thrown up a few curved balls over the past few weeks and so I have been fairly inactive, hence no blog post for a while.  However I have been planning and rehearsing a new show with some old songs, new to my solo set, and some new songs I haven't performed live yet. I have also been collecting all the new bits of lure fishing end tackle I need for  next month's fishing expeditions and the big one to Cornwall in September.  I love playing around with the stuff and making sure I have everything  I need. It has been a while since I caught a bass for dinner so I shall be exploring every avenue until I do. I won't be neglecting the pike and perch lure fishing either. I recently caught a beautiful little Jack pike on a tiny lure on the river Stour in Essex.  It was the healthiest  looking pike I have ever seen.  It indicates the river is in very good condition.

Tonight I will be venturing out for a cycle ride on my Bianchi for a night ride. I shall be going on my own as I don't want to be a slow coach for a companion to be frustrated by. Ramblin' will get the call sometime soon, when I have a few more miles under the belt, and off we shall go. There are some lovely day time rides that are only a few miles from where I live and  I love riding through the city at night and heading east down the  river Thames.

I have a couple of FDPFAFDW shows in Sweden booked for next summer in Sweden and Luke and I are looking at putting some shows together for the winter. He is doing gigs on his own to considerable acclaim. He is well on his way to developing a very fresh and special show. He was so good at the last Robin gig we did I realised then that it won't be long before he won't be supporting me and I 'aint gonna get blown off my by son ha ha! Seriously though, I expect him to do well and if he is more successful / better than his dad then that is all good. It is how it should be.

I'm off to Norway again in August. I shall be returning to Elisabeth Labdon's lovely gig, Vaktbua on the island of Odderøya, Kristiansand. I plan to spend a few days there and get a bit of fishing in as well as hook up with old friends.

Behind Vaktbua is the ocean. Lovely!  Vaktbua is a small cafe with a garden and the garden is where I will be playing. It is a special venue and well worth a visit for it's unique atmosphere and community  spirit. I hope I will also be able to renew connection with the folk at Happy Days, a project for folk with disabilities. My friend Karen Valeur runs the project and she is an inspiration to anyone who gets what she is doing.  As I write this another email came to invite me to play a Norwegian festival. I wait to find out the details. I am really beginning to think I could go and live there for six months of the year and work quite a lot.

Meanwhile, back in the room, the  Labour party seems intent on tearing itself to pieces. The "Ministry of Data" seems to have lost sight of the facts around the economy. Osbourne is floundering and trying to work out how he is going to break the news that he has underestimated some cuts and must increase them. Is this because he has decided to spread his austerity cuts over a longer time scale than he had intended? A quarter of a million marched against austerity only a few weeks past, just before the budget. Who says marching is pointless?

I couldn't be at the march this time but I did contribute to the 38 degrees full page newspaper adverts in the same cause.  A couple of days ago the Financial Times reported that the people most adversely affected by the cuts, announced in the latest budget, would be the vulnerable elderly, the disabled, low paid working families and children in poverty or at risk of it. Local Councils are struggling to provide services and we all know which services will be cut. Example - Child protection Services cut by 8%

Last night I down loaded a copy of the Quran. In fact I down loaded three slightly different translations. I felt it was time to investigate the good book for myself. It is too early to say much about this but I will keep you posted. I can say that some of it is very beautiful and some of it seems to present foundation for some of the dark side misinterpretation by modern day Sharia Law. One passage, referring to transgression by a female, allows for her to be struck. I mention this only because another translation adds the word lightly in brackets. So then, struck lightly? How lightly and who decides? Is it Allah or the husband? Sharia Law requires that all adulterers should be struck, with 100 lashes. In practice, this often applies only to a woman.

So to I.S. We have seen the young gay men being thrown off buildings to their deaths or to be finished off  by stoning by the mob. I recently saw a documentary that took place in a god forsaken desert landscape where a young woman was brought before her executioners. She was alleged to have committed adultery but there was no witness  present as prescribed in Sharia law. An IS soldier asked if she had anything to say before she was punished?
She replied to the effect that she wanted to send a message to young girls and women to protect their honour and to be virtuous. Her father was asked if he could forgive her. He replied that he could not forgive her but he hoped that God would. Did he mean this or were his words formed by his fear of the IS men all around him?
The woman was thrown to the ground and the stoning began. She screamed as large rocks were thrown by several men. Her father rushed forward. He was very close to her, standing over her, then he threw a rock at her head. I will never know if he was trying to punish her or to end her suffering quickly.

This is the abomination of feral humans who fight for gold under a black flag. They do not love God and it is clear they do not fear God. I never thought that I would be capable of feeling what I do towards these travesties of men but I say- eradicate them entirely. They are the worst clear and present danger to our world other than its ecological desecration for which we all have some responsibility.

Today is a lovely summers day with a soft cooling breeze wafting through the metropolis and I am minded of those who are oppressed without relief nor any means of escape.

in an english garden 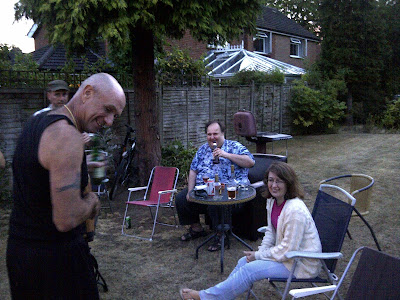 It has been an interesting few days passed. I played a FDPFAFDW gig in Westbyfleet in Surrey last Saturday at the home of Steve and Nicky, on a lovely summers day. It was July 4th and so on arrival I enquired why the garden was bedecked with Union jack flags. I was told it was to celebrate getting England back from the yanks.  That is certainly true for the the people of Mildenhall in Suffolk, where the huge US air base is being closed down, though whether this is a positive for local employment and local people is debatable.

The sun shone brightly and it was a joy to be outside in an English country garden, well almost.  It is a lovely garden attached to a very nice house in town. I knew everyone there except Dave who missed the gig  I played in St Albans for Andy Palmer so it was a happy little reunion. 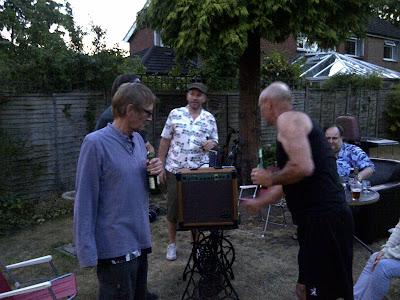 I had asked for the use of an amplifier for this gig and a couple of the guys bought a very nice, small amp for acoustic guitar and microphone. It sounded lovely in the garden. The amp even had a little spring reverb unit so I could simulate my little chapel vocal effect. Loved it! We all signed the amp which is now called "Edgar's amp". I feel sure I shall be plugging in to it again.
There is not much to say about this event except to say it was a delightful time with lovely people on a lovely summers day. Lots of tale telling and good humour. I enjoyed it very much. 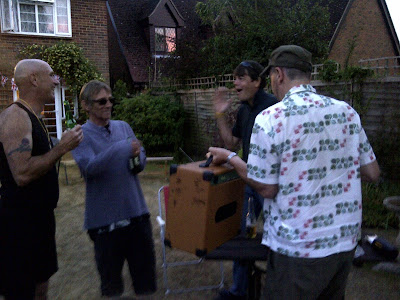 After the gig I shared a taxi with Andy and when we got out at the station we had a chat about what might be on for next summer. I had already said that if I came back to play for these folks I would rather do a fund raising thing than a paid gig. Subsequently Andy has chatted with Steve and Nicky who are up for the idea. Nicky has promotional skills and music biz experience so I am sure she will have good ideas for this. I  envisage a garden party fund raiser for a specially invited audience including previous FDPFAFDW hosts and others. Of course this is early days but it is something I would love to do.

Yesterday I did an interview for the BBC production Psychedelic Britannia. Some of you might remember the EBB appeared in the BBC film Metal Britannia. I always enjoy this kind of thing. It focuses the mind and it was interesting to explore a part of yesteryear through the questions  of  a film director who wasn't born then .  The crew were nearly at the end of filming with a couple of remaining shoots to do. They told me it would take about five weeks to edit. I will let you know when it is due to be aired.

At this time I feel for the people of Greece. When I was last in Athens I could see the damage done by the austerity policy they were forced to adopt. I had been in Athens a year before that and the downward slide into dangerous poverty was evident every where. For years the people have been ruled by corrupt government and weakened by ridiculous tax law and many other idiosyncratic policies that would be untenable anywhere else in Europe. This is a dangerous time for them and I hope that their burden might be eased. Personally I doubt that European fiscal policy and market forces will allow whatever Greece does to undermine their own interests. We shall see as we wait for what will be an historic outcome, whatever is decided in Germany.

Nearer home, I was very interested to hear a spokesperson for the striking Tube workers saying that this is not a strike about pay but is about work/life balance. Let us have more of that thinking please.