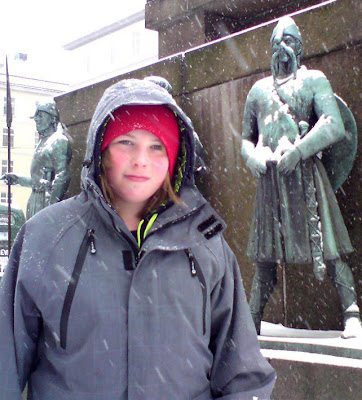 Sonny and the Vikings
Hey! You know what? I am going to let young Sonny’s photos speak for them selves. I’d just like to say it was a real pleasure having you with us mate. It must get a bit much listening to some of us old ‘uns rattling on at times so thanks for your positive vibes Sonny. 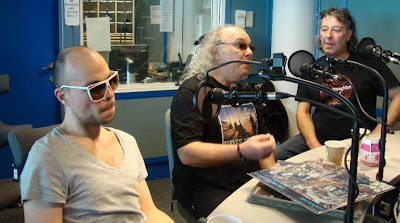 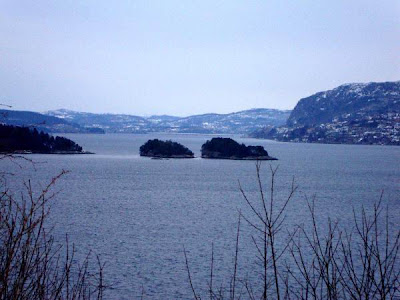 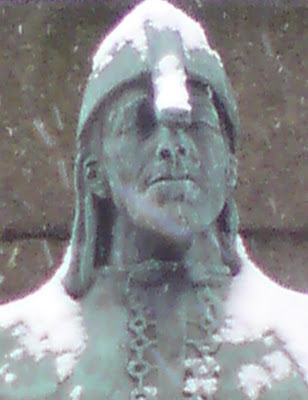 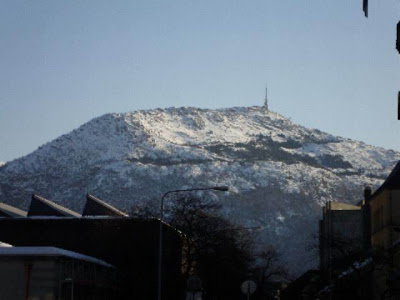 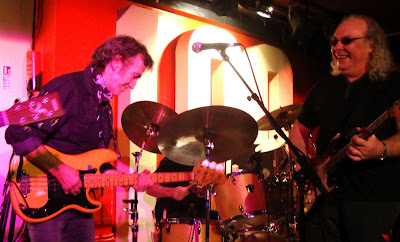 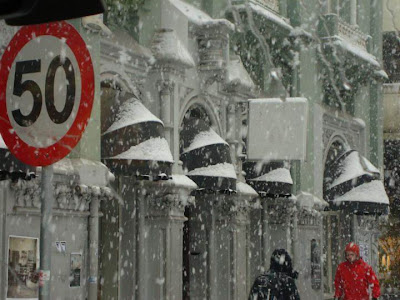 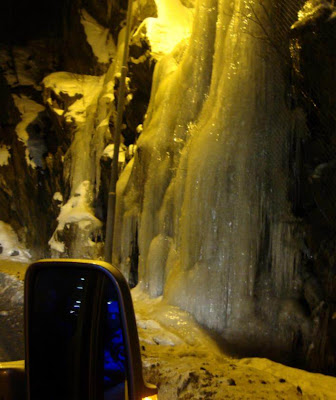 the shape of the bergen shows as recorded

The trip to Bergen in Norway was a lot of fun. It started out a little strange when we were checked in at Gatwick with all our gear in about ten minutes and no excess baggage to pay unlike our last trip. The decision by airline staff to charge excess fees seems to be entirely arbitrary. The flight was uneventful and we had a tail wind that reduced the flight time by twenty minutes. Better and better?
Next we were stopped by customs at the airport in Bergen. Their doggy liked us though. Eventually they let us in having established we were neither terrorists nor carrying contraband.
I hit the bed in my hotel room at around 6am after watching the Winter Olympics so I missed breakfast. Steve brought me some to my room which was very thoughtful. It got me started for the day ahead.
Around lunch time Steve, Luke, Sonny and me headed out to the nearby national radio station for two interviews with Bjarte a protagonist for vintage rock music on the Norwegian radio scene .
He was a charming host and best of all he had done his home work. I remember listening to both Luke and Steve and wondering what their answers would be. It was strange lsitening to Luke talking about life and music with his dad. It made an interesting change from some of the inane questions we get asked during interviews.
Later we sound checked and prepared for the Friday evening show. It went well but there were a few small glitches but nothing disturbing.
For some time I have wanted to play a set list where the music starts gently and builds smoothly through the show.
We tinkered with it at the 100 Club. Steve decided to go the whole hog and produced a set list that did that. See the screen shot at top of page.
We moved a song or two around for the Saturday show and that went even better. The audience was very warm on both nights.
As usual it was very nice to meet up with old friends and meet new ones. My good friend Jarle presented me with the gift of a beautiful Sami Kuksa (drinking cup) carved by hand from a birch burl. I will treasure it for ever.
Thanks to all at The Garage for their support and assistance, Special thanks to Torgrim, Dennis and Reino. The Garage is a venue where staff try very hard to service bands and provide a good atmosphere in the venue.
Thanks as always to Spadge and Ric. Gentlemen to the core.
Shattered but content we flew out of Bergen as the snow fell steadily. Very satisfying to see how well the Norwegians cope with this snow stuff. Life just carries on and planes fly
I guess it will be quite a while before we return to Bergen but time will tell. Mean while we are looking to explore the possibility of some shows in other parts of Norway, especially in the north.
Sonny was our photographer for this trip and I will be posting his photographic high lights here later.

Don’t forget we are on telly on Friday the 5th of March, METAL BRITTANIA
at 9p.m. on BBC 4.
Peace
Posted by edgar broughton at 18:51 4 comments: 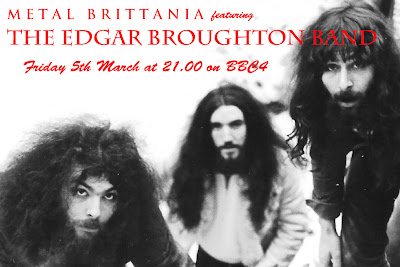 Just got in from the 100 Club on the night bus to Wndsworth. Good night I would say. Still didn't get to take any pics but I reckon nearly every body else did so when they send me some I'll post 'em here.
Well, the new set worked for me but I guess there will be the odd change for Norway next week.
Some one reckoned we did an hour and fifty minutes so that would be about right. Peter Green showed up which was nice. Good to see him about and looking well. Years ago when he was playing with John Mayalls Blues breakers they all came back to stay at our house in Warwick. Mayall had one side of their van as a bed and the other guys sat cramped on one bench on the other side. He slept in his bed that night and the band on the floor with improvised bedding.
In the morning Peter had a look at my old strat and changed the set up for me.
He might not remember it but I do. He was a thoroughly nice guy. I know he has had his hard times but has come through them and he sounds as good as ever judging by a recent live set I saw on The Arts Channel. Look out for it if you like the blues. I wish him the very best of every thing and I hope he enjoyed the show. If you were there I hope you enjoyed it as much as I did.
More later .............................
Posted by edgar broughton at 01:51 18 comments:

Feeling mischievous and need to change da format. Might take some pics at the gig tomorrow - might not. I'm just so busy I have hardly time to click the button. Should be good tomorrow. We are playing a set with a few surprise changes. Well, I know about them - I hope. Free demonstration of Japanese Tea Ceremony at the Mitsubishi gallery at British Museum 3pm. Its very near the 100 Club. It's about twenty past seven. Gonna have a bath and a sandwich and head off to bed but not for about another eight hours.
out ...... ...
Posted by edgar broughton at 19:06 5 comments: 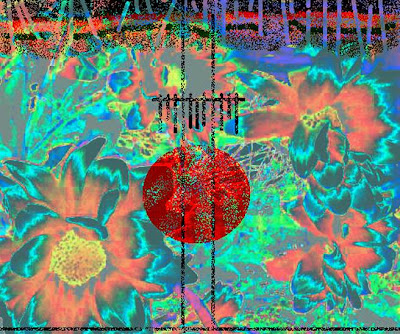 one red note on a mysterious score

Today I received a very interesting email from the RCN re the campaign for justice for “Whistle Blower” nurse Margaret Haywood who was re-instated after being sacked and disqualified for drawing attention to ill treatment of patients in a Brighton Hospital. They are extending this campaign in a pre election drive to engage government over the issues. If standards in the care environment are to be maintained and improved, then practioners must be safe when they decide to high light bad practice. This is essential when their protests are ignored by self serving managers. If you would like to join this campaign to ensure they are protected see the link below.

Well done folks for the suggestions around the issues of new year resolutions or those made at other times. Thanks to all. Send me your postal details Angela and a signed copy of Parlez Vous English will be winging its way to you

I’ll be off to a weekend of intense rehearsal on Friday. Last rehearsals went well. We were working mostly on some songs we have toyed with and performed but they needed work. We are going to put some thing old in the set that we haven’t played for years. I think we might have played a couple of these songs back in the day when Victor Unitt was in the band but not since. There is an idea to perform The Dawn Crept Away at some point and a plan to approach it with a libretto as in opera. It might work, it might not but it’s good to approach things from a different angle. Some time ago while rehearsing we arranged ourselves in a circle and played around with songs that were hardly written or had any thing like a finalised arrangements of their parts. We mostly sat around to play where we would usually stand, except for Steve of course. I remember Dave Cox who played guitar then, spent most of the afternoon on his knees in front of his amplifier eliciting some magical noise from his guitar which we never heard again. The point is we approached things a bit differently and it produced some different music.
I’ll try to get a few snaps of the proceedings over the weekend and put them in my next post here.

So Clare Short spilled the beans at the Chilcot Enquiry. She really has it in for her Tony doesn’t she? She voted for the war and has been accused of only supporting the British Army if it was handing out food parcels and other cool stuff not the bloody stuff of war. In other words it is suggested by many commentators that she is probably a bit of peacenik hippie when it comes to war. Ok for me and possibly you but that might be a bit of a handicap for a minister involved in the process of supporting troops in Iraq or Afghanistan. If Clare was a little more willing to take some responsibility for her involvement in the errors of the New Labour cabinet she was part of then, perhaps her revelations would have more power. Maybe what she says is true but, harking back to the issue of whistle blowing, it’s a bit late in the day comrade.