IT IS COMPETITION TIME AGAIN ! 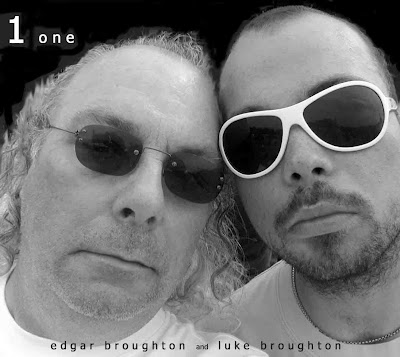 As promised here is the new competition. The prize will be a signed copy of 1 o n e which is a CD of four unreleased and re mastered songs by Luke and myself. The songs are ZYDO GAZEBO, SIX WHITE HORSES, CATCH MY BREATH and SAY YOU LOVE ME. Some of you will have heard three of these songs in an MP3 format on Myspace whereas the new CD contains the masters. The CD will be available at all our gigs along with a new EBB CD of previously unreleased demos and tracks called The Ones That Nearly Got Away plus a collection of their own demos called Not A Pretty Sight from Steve and Art. All of these CD s will be available at shows on the upcoming tour. Songs from all of the new CD s can be currently heard on our Myspace though the sleeve pics seem to have temporarily gone walkabout.

Because the last competition was lost I am going to add a copy of SUPERCHIP signed by all of the EBB and a signed T- Shirt.


So what do you have to do to win the competition?
1. In the comments section of this post write a caption for the photo below of the coppers and little girl. By the way she is Steve’s daughter who has her own family now. She is as gorgeous now as then. This photo is one of my all time favourites.
2. List your three favourite EBB songs. 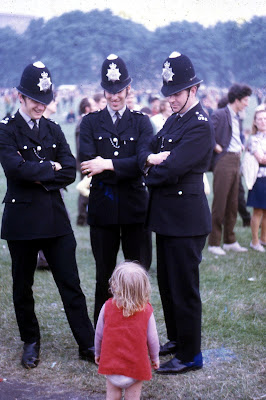 Steve will judge the best caption to the photo and when we return from Germany we will announce the winner who will have to email a postal address to where the prizes can be sent.
This competition will be live until the beginning of the UK Tour so get posting your captions in the comments section of this post. As in the last competition you can enter as many times as you like providing you enter with a different name or anonymously each time.

The EBB finished rehearsals yesterday in preparation for the upcoming European / UK tour. I can tell you we all worked extremely hard as we wanted to build improvements into the show for 2007. We all ended the rehearsals very happy with the results and we have added a new song called Soldiers of the Light to the show. We have also put Poppy in and Green Lights back in along with Last Electioneer which we took out for a while to save my voice for the Live DVD set in Bonn.

Posted by edgar broughton at 15:37

"Bet my Uncle is louder than your Uncle"

which one of you lot is Officer Dan then ?

I said your names are not on the door so you can't come in ..ok!

this week its:
evening over rooftops
call me a liar
up yours (for Blair and Bush!)

next week they will be different!
cheers
tony
from Lincoln too

Evening over rooftops
Green Lights
It's not you

But like Tony from Lincoln it will change soon.

"What`s so funny mo-fos?Don`t make me reach in my back pocket!"

1.Evening Over Rooftops
2.It`s Not You
3.There`s No Vibration But Wait!

'I think that nappy qualifies for an ASBO'.

1. Evening Over Rooftops
2. It's Not You
3. Death of an Electric Citizen

Hope I win but I like the Asbo nappy myself ! Nice one, Paul

ello ello - shouldn't you be onstage with your dad or does that come later ?

say you love me
call me a liar
hotrel room

'This one looks like trouble...better call for the SWAT team'

Janice in the Dales

"It's a good disguise, Osama, but it doesn't fool us"

1. Death of an Electric Citizen
2. There's No Vibrations, But Wait
3. Out Demons Out

Little Miss Broughton says-
'I'm on strike!.....and this is an official picket line'.

Dan in the Dales

'She looks like she may be concealing an explosive device... call bomb disposal to de-fuse her nappy'.

James in the Dales

its called apachie drop out, not anappy drop out!

or if i get mad i'll take ten for one ! and theres only three of ya!

(told ya it would change)

'When you three are retired with 'stress', I'll still only be two and a half years old'.

Oi, stop laughing at my Liverpool shirt or my uncle will do you

Which little piggy had roast beef then

Arrest my mum, she won't let me stay up to watch The Egdar Broughtons Band!!

Which one of you has got my dads dope?!

So, who's gonna put me on thier shoulders, and take me up the front then?

I'm with the band, I had to put my back-stage pass in my nappy to stop it leaking. You can search me if you want?

Ello ello ello little girl what's your name?
Side by side
Evening over the roof tops
Old gopher

Which one of you is old 'bill' then?

See you in a couple of weeks.

"OK OK who started the Out Demons Out chant"

1.No Vibrations But Wait
2.call Me a Liar
3.The whale

Michael from Albuquerque New Mexico,USA Said
Girl to Policemen Who bumped you three on your heads?
Out Demons Out.
Evening Over Rooftops
Theres no Vibration,but wait.

For the moment :
speak down the wires
hurricane man/rock'n'roller
getting hard/what is a woman for ?

Damn! I gotta work nights the week of the UK gigs.
& I really wanted to get my hands on the new CDs too. Are you gonna do them mail order?
Also, any south coast dates this summer?

Side by side
Someone
Dr Spock

Yesterday :
Why can't somebody love me
Old Gopher
Jackeline

To you lucky ones that'll see them live; have a safe journey and a hell of a time !
Jarle.

Sorry, you can't come in, you haven't got long hair, that's not your dope, an' you prob'ly think you're grown-ups!

If I'm little red riding hood you must be the 3 little piggy's.

If I'm little red riding hood you must be the 3 little piggy's.

here are a few:
1: (girl) Which of you fuckers stole my stash?
2: (girl) My dad says you're all tools of a fascist state so Thhhhbbbbbtttt to you.
3: (cop) I don't care how many concerts I get to hear for free, if I have to change another tofu nut burger nappy, I'm leaving the force
4: (girl) Is that a truncheon in your pocket or are you just pleased to see me
5: (cop) I don't care if you are with the band, I'm still not changing your nappy

the bear and the rabbit were taking a shit side by side, hey said the bear to the rabbit do you find after having a shit that the shit sticks to your fur... no said the rabbit,and with that the bear picked up the rabbit and wiped his arse with it.. i wish i was wearing a rabbit instead of this flaming nappy!said the little Broughton girl.

1. Go for your guns when the clock strikes noon

2. (girl) OK lads, look after yourselves and go get me that hairy one with the loud mouth

4. You may very well call us PC Plod young lady, but we are, in fact, part of a highly efficient organisation dedicated to impartially maintaining the delicate balance between civil liverties and the rule of law whilst promoting social cohesion within an overarching framework of respect and tolerance for the diverse communities which we humbly serve.
Now move along or you're nicked.

5. So, have you started to say a few words yet? Yeah, well could you go and get me an ice cream then 'cos I can't reach the counter.

6. (police) Don't worry Sid they'll never rumble you in that get up

7. "oos an oochycoochywoochygirlywirly then?"
"Sorry officer, I didn't quite catch that"

8. Is the man in the crowd with his back to us actually a youthful Tony Blair watching Rob on guitar and saying "You know, I'll never be able to play as good as that, I'm going to have to think of a different career"

9. Do you give your panda a nice cuddle in bed too?

10. Don't just stand there laughing mate, do something about that smoke from the forest fire.

11. Is Steve's daughter saying to the two policmen on the left: "Don't look now, but there's a square-headed ghostly looking robot peering over your shoulders"

12. Is the robot saying out of the way earthlings I will speak only to your leader in the red dress and space pants

13. Is the girl on the right saying: I don't care if you are a drummer in the Edgar Broughton Band, you're not getting off with me with until you grow your hair and get some decent trousers.

14. c'mon guv just 10 minutes off so we can do some grooving to the funky beat man.

15.Is one of the policemen saying. C'mon lads, if we can look silly enough we could end up as a digitised image on a caption competition on a, yet to be invented, worldwide network of computers viewable by billions of people in every corner of the globe.


What is a woman for
Refugee
It's not you

For the last time im Not a groupie, i just like the music!.. could you tell me where the bands tour bus is parked .
cheers
tony
lincoln
everything mostly!

'I'm collecting for the UK Prisoners Benevolent and Support Fund......cough up you three!'

1.Side by Side.
2.Signal Injector.
3.Evening over Rooftops.

"So you must be the Madhatters Daddy's band keeps singing about then?"

3 Favourite EBB Songs: (in no order)

Remember Redcar ?.First one of you Pigs to make a move and i'll nut you in the bag.

1.Ancient homeland,2.Its not you 3.Get out of bed/side by side.

" ahemmm...I'd like to say a few words on behalf of the band"

Get a Riise :)
Frühling flowers (who is Claudia ?)
Signal injector

"look i'm tellin you when i grow up i'm going to be famous, whats so funny about the name Britney Spears"!!

"What does she mean we gonna be in a blog someday?"

Hotel Room
Evening over Rooftps
Love in the Rain

Hotel Room
Why can't somebody love me ?
Someone.

Do I want to buy a ticket for the policemen's ball ? I'm not sure. Is it a dance or a raffle ?

1. Evening over Rooftops
2. It's Not You
3. Death of an Electric Citizen

do you know what time S Club 7 are playing!

Officer's can you help me i've got a big peice of chewing gum stuck to me arse!

tony (again)
you name it!

My Dad said you can't come to his party tonight!

Dr Spock
Someone
Call me a liar

Hangover in the Dales

Dr Spock
Someone
Call me a liar

Hangover in the Dales

cheers
tony
everything past and present.

" The Eagle has landed!"
Frank Gallagher(Shameless)

A Policemans lot is not a nappy one

Death of an Electric citizen
The Psychopath
Dropout boogie/refugee

"have i come to see Eric flipping Clapton.... you must be joking man!..i'm here to see the Edgar Broughton Band!! Eric Clapton indeed!"

"look i'm telling you for the last time my dad played drums on tubular bleeding bells!"

cheers
tony
thats it now me last one !(promise)