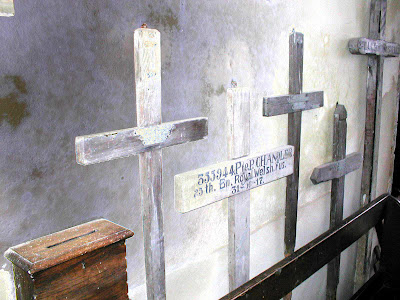 crosses that marked the graves of british soldiers who fell during world war one
I saw these crosses in a very small and lovely disused church in Suffolk last weekend. They were used to mark the graves of the fallen in world war 1 and were later replaced by stone crosses. I found the sight of them very moving. I plan to record some of Luke's songs in this church later in the year when the weather is better.Lloyd George, who as Liberal prime minister declared that troops returning from war in 1918 must have "homes fit for heroes". This was the inspiration for the song Homes Fit For Heroes by the EBB. Between the wars, the building of council houses steadily increased. But some of the newly created tenement towns were as ghetto-like as the slums they replaced.We recently heard how the families of British soldiers serving in Iraq and Afghanistan are living in squalid conditions on army bases. Nothing new there. We also know that it is almost impossible for a younger person like Luke to afford any kind of housing in London and rents are prohibitive.
The EBB will be rehearsing again at the weekend for the forth coming tour. The UK leg was recently put at risk of being cancelled due to none payment of monies to Eclectic Records by one of their distributors. I am happy to say this has now been resolved but it shows how precarious our position is in these strange times. Meanwhile I was told by a little bird that the Black Eyed Peas were recently paid a million and a half for a 30 minute spot. For some people money is in plentiful supply while rightly so, we have to cut our cloth accordingly.
I have been mastering some unreleased songs for a EBB compilation CD today. It was quite a nostalgic task as I haven't listened to any of them for some years. We hope this will be ready for the tour but our priority is to rehearse the show. Eclectic tell me the EMI / Eclectic compilation complete with Out Demons Out from the Glastonbury set will be released in April.
The fishing was useless at the weekend as gallons of flood water pushed through the Stour at a frightening rate. We got out for a short session with lures late on Sunday afternoon but didn't catch. Still, there will be other days. Roll on Summer when the pike fight.
Let me apologise once again for the lost competition. It was going so well and I was extremely annoyed by the carelessness of Google resulting in it's loss. Never mind all is well now and I have devised a new competition for the near future so keep looking. I think that is about all for now.
Peace
copyright e d g a r b r o u g h t o n 2007
Posted by edgar broughton at 15:34

Hi Rob, may i ask why you want to record in this church is it to do with the sound or atmospherics, im just curious no need to answer if its for personnal or religious reasons,
Housing for our kids is going to be a problem for them in the long term more and more will have to live with parents for longer (no problems there for me) but they will need their own space as and when the settle with a partner and it may end up frustrating for them ,
looking forward to any new/old material comming out soon, i have the glastonbury cd with out demons out , would have loved to hear the whole set and or see it on dvd ! i bet it was scarey!! do you remember it at all .
cheers
and see you soon
tony

Hi Tony
There is no religious reason for recording in this church though it has a very positive atmosphere. I would like to record Luke singing his songs to his own acoustic guitar accompaniment. The space is perfect and the acoustics are very nice. It would make a lovely temporary recording environment in the summer and we would be completely undisturbed.
That's it really.
Peace