Hi folks
Ramblin and I will be filming stuff for the DVD of vocalisations called YOIK in Wales for a few days starting tomorrow. Ramblin's dulcet tones will be featured on the collection.

My new web site is nearly finished and will be up and running in a week or so. I have built it myself from scratch so thats another set of skills under the belt. I still haven't opened the manual but I managed to finish site one. It looked like a slightly arty re-make of the EBB site with a touch of the Roy Harper's. Roy what is that old photo doing on your front page? You vain old so and so lol!
With a few reasonable variations of my new site on the hard drive I decided to start again with a different approach. This turned out to be the final design based on a survey of friends and fellow collaborators.

The First Supper blog will continue as before.

I have to finish my book my end of October so I will be heading out to the westerly, wet wilderness for the whole of September when I will write and fish and write and fish etc.


Fear not Paul Cowen and others. I promise it will all come clear in the mix. I am working with others, on new material for the 2011 album. I am working on a couple of songs with a young programmer who is making tunes for my lyrics which is new ground for me. Exciting though.
Mean while the song Ice on fire is about to get a chamber orchestra treatment and Six white horses and other songs are about to be re-born. If it all works out I might play some play live shows next year.
Many years ago I used to sing at parties in and around the Warwick, Stratford (my first times for meeting posh people) area. Back then I thought I was Bob Dylan singing the blues but I was Bob Poole's mate in reality lol.
It's where the ideas for many songs, to be recorded later, were born. I've wanted to get back to that in some tangible way for some time, so the advert below is the first step.
Back in the day there was a rallying cry among the trade unionists like me and it was one that had echoed down the years. It was " A FAIR DAYS PAY FOR A FAIR DAYS WORK".
On this basis I decided that I would offer to perform at any ones private event next year for one day of their pay. Now that is what it says and that is what I mean so if a person earns £20-00 or £250-00 per day then that would be my fee.
In addition my travel costs e.g.train fares, air fares where necessary, accomodation (preferably in the home of my patron, if appropriate) and supper would be part of fee. You even get to choose some of the songs.
None of these gigs would be listed any where and the only people who would know about them would be the folk who make a booking and those they invite. There are ten shows on offer and as they are booked the number remaining will be shown on the new site.

If you are interested email for more details  ebbman@btinternet.com 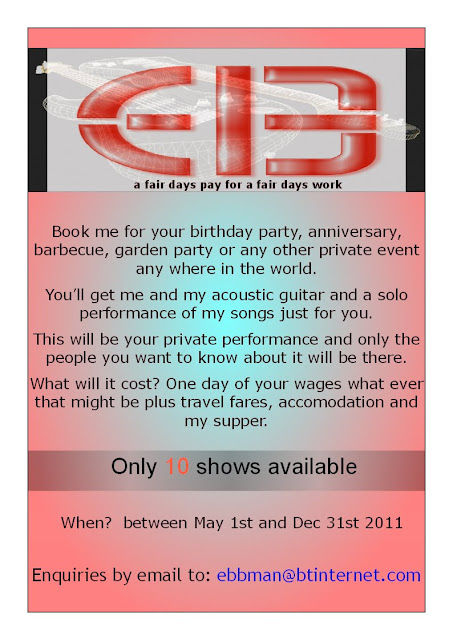