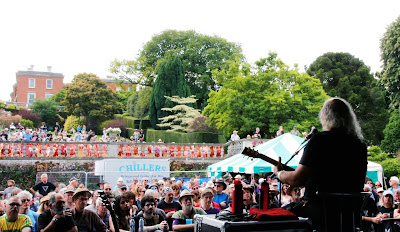 a new day in the ephraim gardens - photo dave randell

The contrast between my previous Fair days pay gig in Caterham and The New day festival in Faversham was probably as wide as could be. From a quiet garden to the huge stately, Edwardian Ephraim gardens.

With a start time of 1.30pm for my set, it was an early start and not my favourite time to set out for a show. Ramblin' Dave Randell, my good friend was my driver for the weekend and we left my house before 9am. Aaagh! Actually I had sensibly gone to bed early ( for me ) and had slept well so I was feeling very good to go.

The drive was uneventful and we made good time out of London heading south towards Kent. We picked up Chris, one of Dave's old school mates, on the way and after a few wrong turns due to poor signing we arrived at the festival site. The sun was shining on a glorious summers day which was a relief considering how random the weather has been at times.

Having parked up next to a field of traditional Kent hops we headed up field and over a delightful little stone bridge and into the Shindig stage area. There were plenty of crew on hand and it was very obvious that they were all professional and very willing to service the artistes needs. Soon I was sitting under a small gazebo with a steaming cup of tea. Wonderful! I am easily pleased but these small things really do make all the difference.

The sound check was a joy and I was very happy with the onstage sound in a very short time. Brian responsible for the onstage monitoring had worked with the Edgar Broughton Band in the past so it was nice to hook up again. My mate Dave set the stage up perfectly for me with all my bits and pieces in all of the right places. Drinks near by , set list at my feet and ritual red towel in reach. Small details but so important for smooth proceedings. Special thanks to Stage manager Trevor Rapson for looking after us so well. 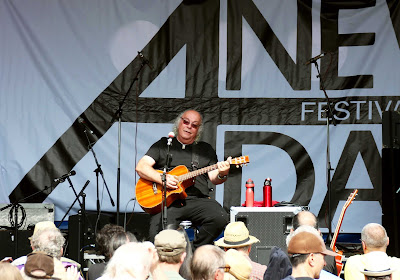 With two stages the change over timings had to be precise. The first band were followed by the next on the other stage and it was soon time to get ready for action. I noticed a few people heading for the stage I was to play on but when i was announced I was surprised by the number of people out front. This gave me a huge lift and I was soon rolling through Red Star. My song The sound don't come for Mick Farren, went down especially well as did Six white horses. It all went very well for me. The set eased by nicely and was very warmly received. I told a couple of short stories to support a couple of the songs, mindful of my 40 minutes allotted set time. It seemed to be done very quickly and I came off stage buzzing all over. Totally satisfying. 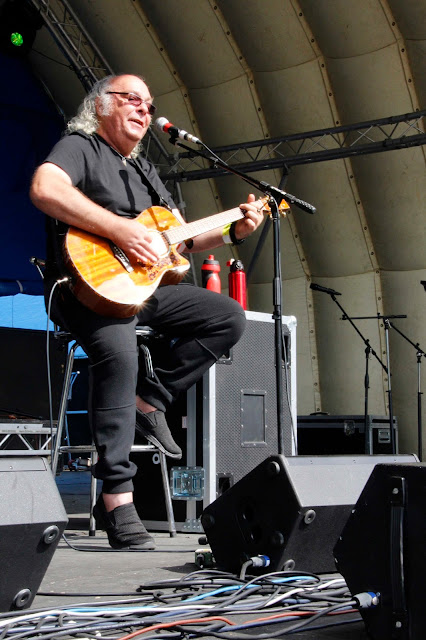 A great gig is always dependent on external factors and a combination of well executed plans. The stage crew and other staff play a large part in this and on this occasion every thing worked like clock work.

After the show I walked out front to sign a few albums and stuff and to chat with folk. There was a young couple from the New York who had come over mainly to see me. I was very flattered. I was so pleased they enjoyed my set. Later it occurred to me that it would have been awful had they been disappointed. I chatted briefly with a lot of people and finally ended up in the welcome shade of a beer tent where my brother Steve and family sheltered from the burning sun. We spent some chill time together before they headed off to Hastings. Lovely to see them as always.

Dave and I hung about with Chris for a while. We visited the artistes catering tent for sandwiches and fine local ale where we sat in the shelter of some large oak tress overlooking a lake which screamed FISH. I might just take a very small rod and reel if I am invited back.
Chris elected to stay at the site for the rest of the days bands so Dave and I headed for the car. Soft Machine were just starting their set as we walked towards where we had parked so for me, our exit was perfectly timed.

It had been a great day out in the sunshine and we were home in London quite early. Tomorrow would bring my third appearance at The Real Music Club in Hove. This is one of my favourite gigs and this time Luke would be on the bill.
In the morning Luke arrived and we all set off to Brighton with Dave on another lovely summers day. 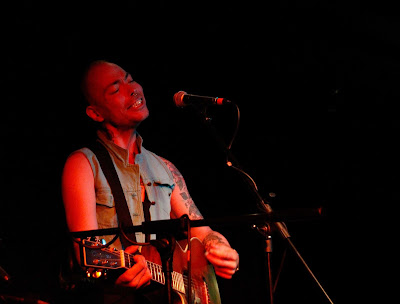 The Real Music Club is housed in The Brunswick pub not far from the sea front in Hove. I like it mostly because it is about a community of musicians and supporters providing an intimate venue for a diverse range of music. It isn't about making money and a lot of voluntary work goes into making it the very special venue it has become. The sound check went well thanks to Lewis the sound engineer. 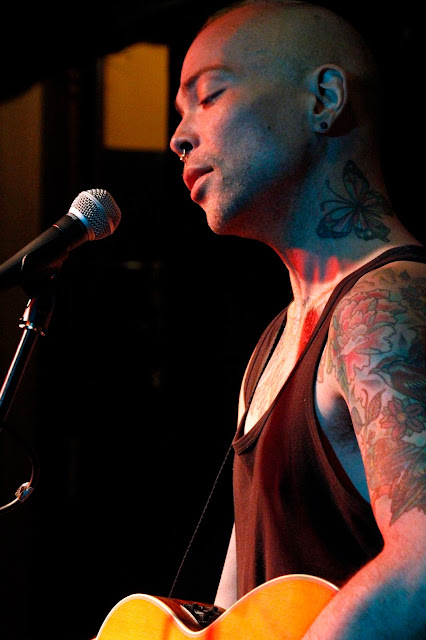 Luke started the proceedings with an accomplished set of songs including his cover version of Kate Bush's Running Up That Hill. You might think me biased but I swear this is the best version ever. The songs Battersea, The Letter along with others were as haunting an as evocative as ever and he finished with a new song. I was pleased to see how the audience connected with the music and how Luke has grown as a performer over the past few months. Yes I am his very proud father but catch him and you will see why. 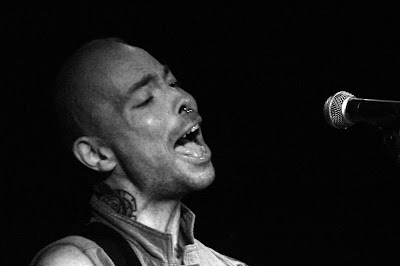 The Kites followed. They are a three piece close harmony folk group with a tinge of jazz. They are polished and make a very sweet blend with three voices, guitar, ukelele, xylophone and cajon. Some very nice song writing was evident here and the delivery provided a seamless journey through a range of diverse and some times surprising topics.

So the bar was set quite high by the time it was my turn to play. I think I just poured it all out. Having an hour to play as distinct from the forty minutes at the festival on the previous day, allowed me to play with the order of songs and extend the stories around the songs. 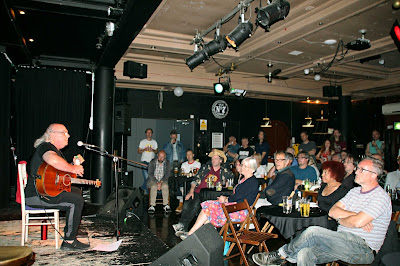 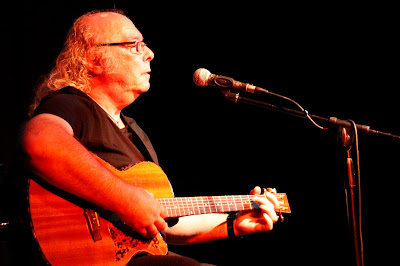 The sound was sublime and I enjoyed playing so much. I experimented vocally a little bit more than usual and found a few new tones. I think this might have been my best performance at the Real Music Club. As always , I look forward to the next time. It was special to hook up with old friends like Shoreham Steve and son at the gig. It was very cool to finally give guest tickets to Alan Obee and Jude who won a blog competition on here a while ago but were unable to come to a gig until now. Lovely to see you all.

It had been a great weekend. So good to see Luke in a venue where no one knew his work and to see more evidence of his ability to connect with them. Lovely! We arrived home quite late after a stop off for fast Indian food at an M25 services. Not bad compared to the other poverty stricken offerings elsewhere on site.The plan was to get to bed early but instead we watched LFC thrashing Arsenal 4-0. A great end to a great week end.