this is the life

I should first explain why I have been so long writing about the Basel adventure at Oli and Angelika's skate boarding park. When John and I returned I had to get back into recording. I am currently working on nine songs at this time and they are all in various states of completion. I'd had a small confidence dip. I love playing live and that is all going as planned but I began to worry about the details of the album taking shape.

Working on my own I had expected to find a few blank days along the way and a little self questioning is grist to the mill. Then some thing extra ordinary happened. I was working on a song called Eulia which is a combination of the word eulogy and the name Julia. I knew the song was important which is not a word I use with regard to my own material. Any way I had been listening to the song and others when I decided to turn the vocal up a good deal more than I usually would. I was astonished. Small imperfections in guitar parts disappeared and as I did this with all of the songs so, they all sounded much better. I was very pleased and all my doubts vanished.
People have commented that they could not distinguish words clearly enough in the past but I guarantee this will not be the case with these recordings. 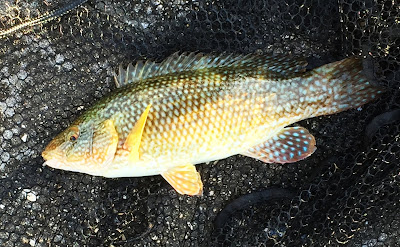 So just before my annual, seriously obsessive fishing trip, I felt happy with all the hard work done on the recordings and I felt I deserved the coming adventure. All good.
Dorset, South Devon and the Norfolk Broads were the venues for the best fishing ever. The trip was a mega fishing adventure with beautiful scenery and decent weather. It was blissful. So many high lights.There was time to write a new song and complete the lyric for another. This is the life.

John and I arrived in Basel on a warm late afternoon. It was unusual because I was to play on the same day we flew in which I dont usually do. We drove directly to the skate board park where I was to play for Oli and Angelika and their friends. It was Angelika's birthday.
The skate boarding park was built by Oli and Angelika and the skating community, on land provided by the local authority. There is a few years left on the lease deal after which they will move to another site, again provide by the local authority.
My first impression as we drove into the area was the warmth and friendliness of every one around. Some people were already skate boarding around the tracks and jumps. It was fascinating to me, as some one who has never been on a skate board, to see the ease with which they seemed to float around effortlessly with the odd unavoidable glitch. 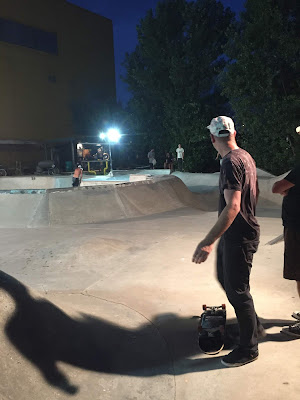 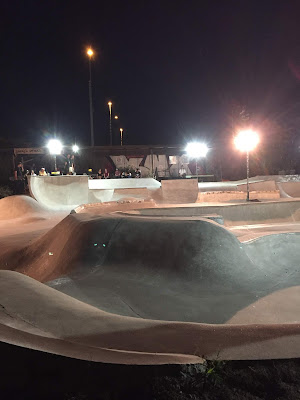 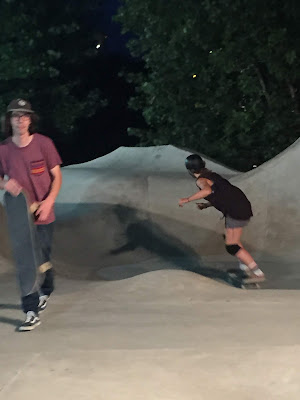 After some wood fired pizza and some sparkling water I was ready for action and feeling good. The skate boarding park also housed a variety of small buildings and caravan like structures that reminded me of the recycled/upcycled dwellings John and I visited in Trondheim. Music floated out of one and some one was playing keyboards with a north African wind instrument. It was like a fragment of Free Town Chritiania, the community in Denmark. It was very nice to see a place for artists and others together in a great space. There was a small bar and some food was available in a couple of small cafe areas. As it grew dark the lights on the skate board park added a fiesta effect and the music playing for the skate boarders was very cool and appropriate for the activity. A great atmosphere, very nice people. I was very relaxed. 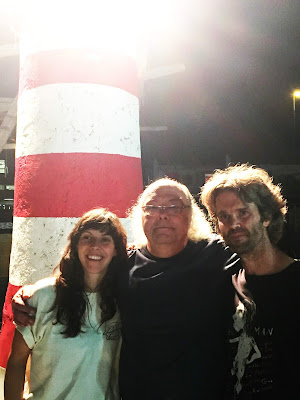 Angelika, yours truly and Oli

I was to use the PA system provided by a local punk band who were really hot and nice guys. They played before me in a container. I was astonished to hear how loud they played in a metal box and I pulled out wanting to protect and sustain my fairly good hearing after years of massive volumes of sound abuse.
Even more astonishing was how good it sounded outside.
I was ready. It felt a little strange at first but I got into my stride and had a great time. It ws so hot with every one packed into the container. Some one opened a side door and cool air rushed in. It was magical and I got lost in it all. I poured it all out and I was exhausted at the end. The bottle of cold water that John handed me at the end was like manna from heaven. It was a long way to go and I am always the guest of the best kind of hosts so I have to try very hard to touch people or it fails. Job done.

Oli dropped us off at our hotel after a couple of cognacs and after a well earned sleep we met up with Oli and Angelika who drove us to a superb family restaraunt just over the German border. We ate a fine lunch and then headed back into Switzerland to a magnificent Roman amphi theatre. 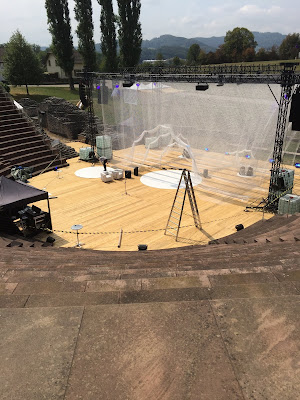 The semi ruined structures have been cleverly restored and the ampi theatre is used for a variety of performances. Nearby there is a museum which depects how dwellings were laid out and it houses some extra ordinary artifacts and fine metal work in bronze, gold and silver. 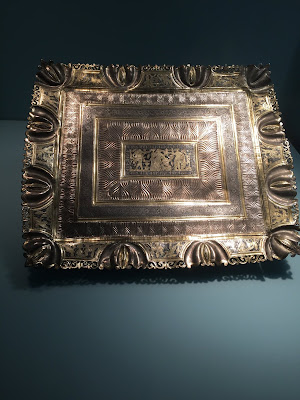 A very fine gold roman plate. probably
a gift to a person of importance

It showed a good deal about the Roman way of life in very accessible way. We also looked inside a a nearby Roman baths. There was good information about the way the baths were used and who used them. It was a fascinating little tour. John and I are both interested in history and the landscape it lives in. 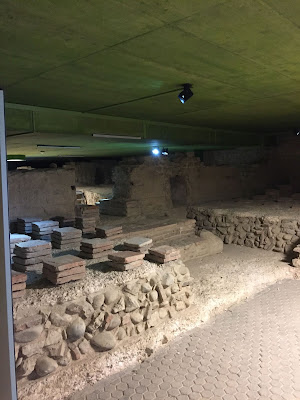 We'd had a great time. I'd enjoyed my gig and playing for my hosts. It was a great pleasure to meet Oli and Angelika. They are very cool people and are making a positive difference for folk while enjoying their sport. May they flourish. It was a strange and happy coincidence that our hosts in Norway were ski jumpers and our next hosts were skate boarders. Thank you Oli and Angelika for a very special time.