music in my head 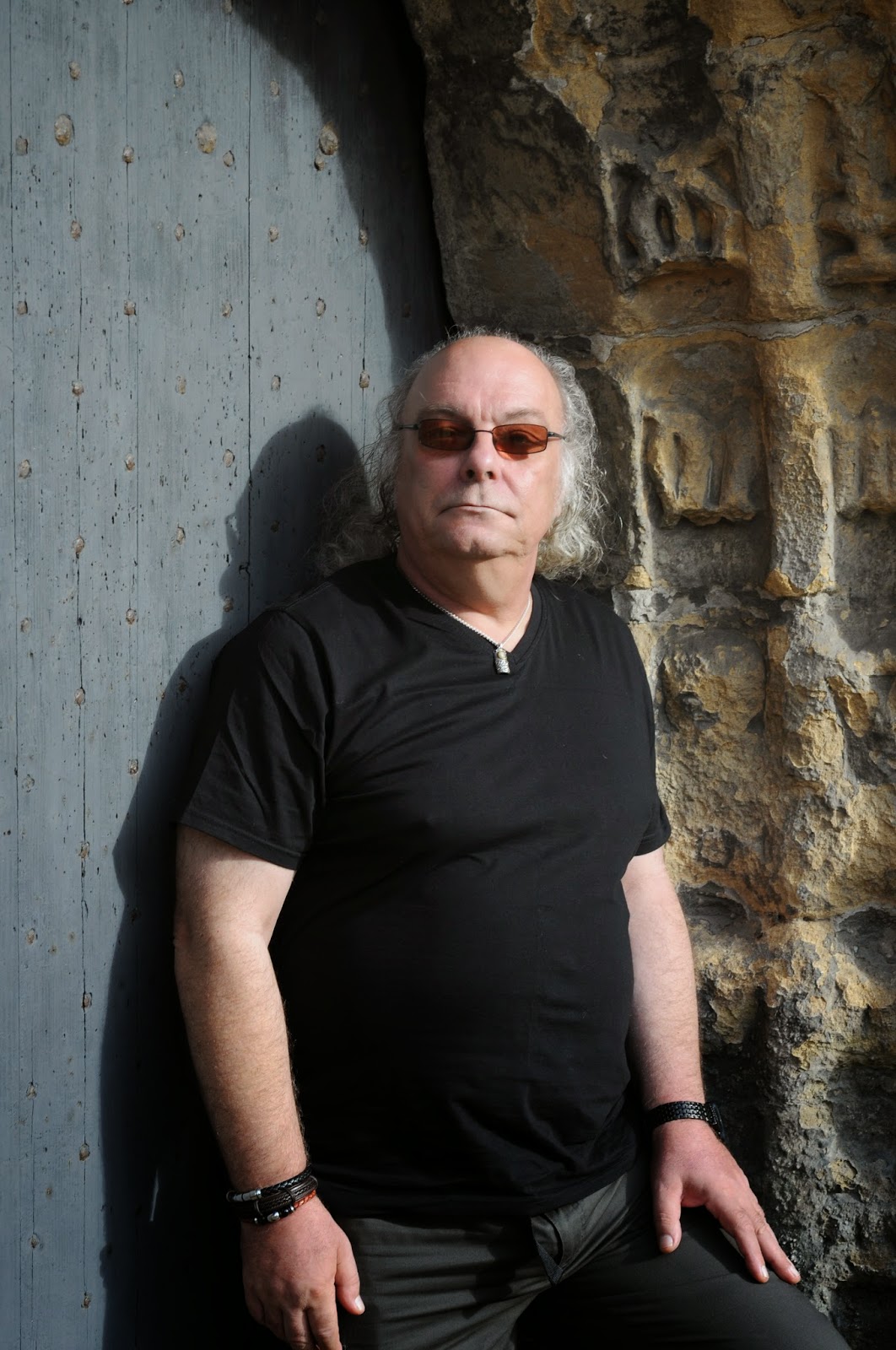 
It was near dark on the Suffolk Stour when the big momma pike took my little jerk bait. A ten minute struggle ensued and this fine fish was on the landing mat and then quickly back in the depths of the weir pool from where she had come. I can hear a choir in my head as I stand shaking at the waters edge. They are singing the chorus to Our Daily Bread, the theme song for our show in Upholland. Yes I do hear music in my head some times and yes it might be part of a dysfunctional cerebral process. Milliband drones on about what the Westminster gang will do as a response to nearly losing Scotland in the Scotland referendum. Sounds like a very poorly programmed replicant/droid chewing marbles. The lights go out on pathway 5 but a light goes on in the mind of a teacher coming to terms with needs of a beautiful boy child with autism. My great friend sends Reiki vibes to the poorly and poorly serviced and I can feel the waves that touch my need.
An Irish road builder once told me – Life is hard if you don't weaken. So I acquiesce, I give in to the ministrations of an ex national and European Karate champion as she works her magic osteopathy on my aching body. Life is good and I am ready. I know that some thing special is about to happen. Though I do not know the nature of it, I know it is a good thing.
I was sleeping in a Yurt some nights ago. It was wonderful. I closed my eyes and drifted off to the Mongolian Tundra where I watched a man string a bow against the curve he had fashioned to double it's power. He is a warrior who before a battle would be given a clean pure silk shirt to wear. A barbed arrow piercing his leather armour would be wrapped in the silk and easily removed from the wound. The Yurt is hot like a sauna as the wood burning stove shows off. A little less wood next time I think.
In a real world department of the Instantainium a little girl rolls across “the Lilly Pad” wrapped in its warm and soft fold as it moves to accommodate her every movement. As she stretches and flexes soft lights are triggered and sweet ambient music follows her efforts to gain control of her body. She is learning to make happen what to others comes as a package with their body, software ready to go, and is mostly taken for granted. My new friend Tim looks on smiling. He gets it.The little girl makes joyous sounds like angels breath as she develops her own path ways to personal achievement.
Some where a little sickly roach is making a lot of noise as it tries to turn itself the right way up. Shhh! Says the little girl. The big momma pike has already heard the pathetic splish sploshing and the little fish disappears behind seventy backwards facing teeth. The little girl gets it and she joins in with the pike's after dinner sing song.
Over the past days bits of songs come in small mini sets. They all sound similar and I like the consistency. Each drafted lyric calls me to make it count. We'll turn the lights on. We know right from wrong. No one is stronger than we. I have renewed and increasing faith in what we can do together and this will be demonstrated to the max in the church in Upholland on the 3rd of October. Time is at the gallop and the next week or so will see the last couple of rehearsals for myself and the guys. All will be revealed in Our Daily Bread.

I hope you can be there. I have decided to keep some “walk up” tickets back for those unable or unwilling to buy on line and those who don't live in the Wigan area. These will be available at the church.
I can hear the choir again. In the choir there is a Russian speaking Polish woman and we shall duet in new language and we shall sweet noise make for pikey, Tim, the little girl and all. 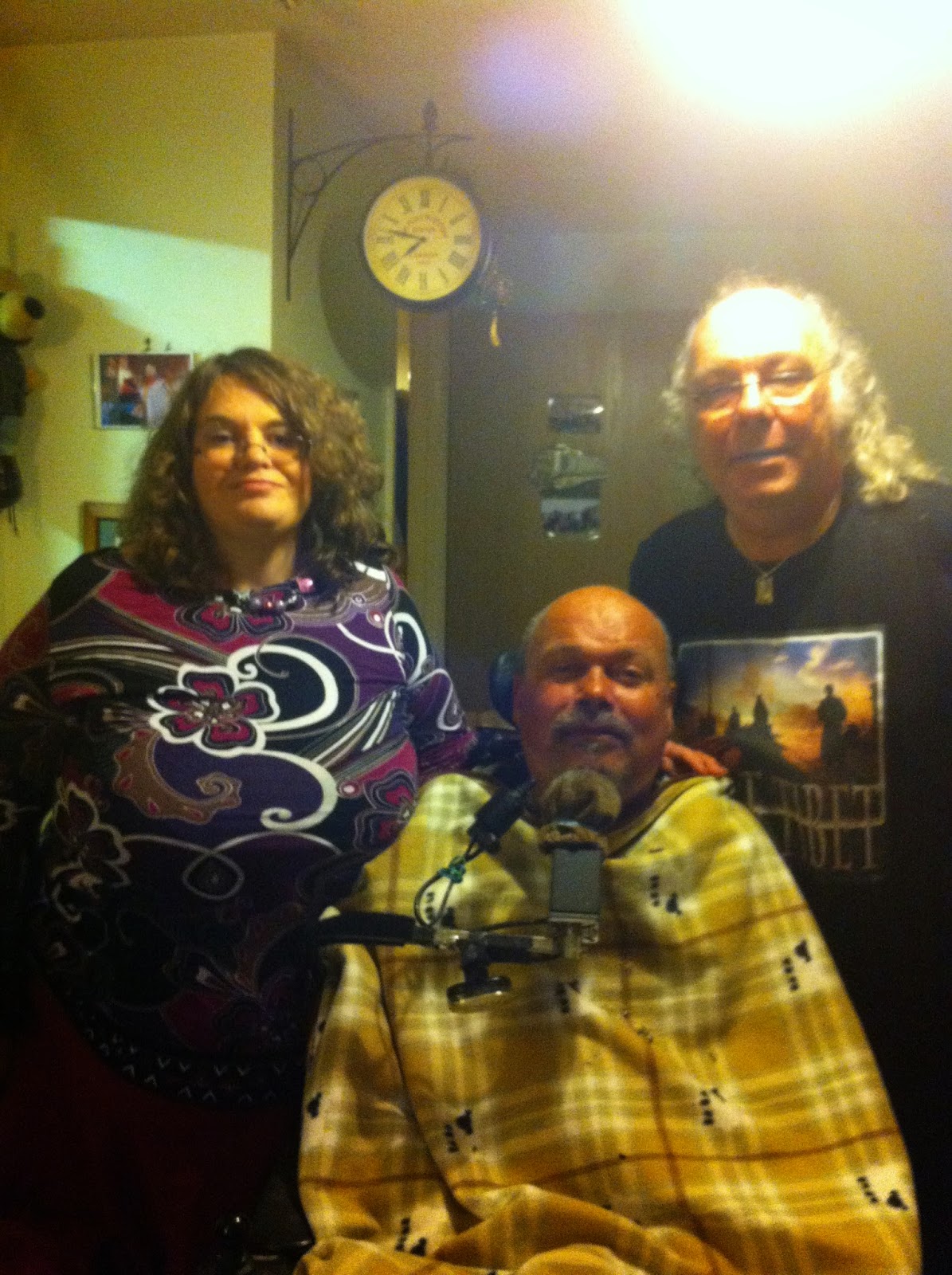 People ask me for impossible things sometimes and sometimes I tell people that some thing I don't want to do is impossible. A little bit naughty but better to do that than to offend. Some time ago Galadriel Potter asked me to play a FDPFAFDW gig for Tim. Tim has MS. He has been a fan since about 1998 when a friend turned him on to the EBB. I agreed a token fee of a 50p 2014 piece with Galadriel. She gave me a one pound 2014 coin which meant my fee doubled. This was a win, win evening so that fitted perfectly.
Galadriel told me her plan was that I would be the surprise guest for Tim's birthday party. I arrived on time, some how that seemed very important. I was lead to the garden where Tim was seated in his wheelchair holding court with the assembled guests. Unfortunately Tim's illness is quite advanced and yet he is so alive and engaging. He struggles to talk at times but we were able to have a good old chat about lots of things early on. Tim's smiles like an angel and has a power that is hard to describe. This is clearly a man who knows how to make what he can of what he has and he is full of life. Awe inspiring and I say this with out reservation.

Galadriel used to be married to Tim. She has her own health issues as many of us do but she is also some one who fights the good fight with what she has. Her request to me could not be ignored and I can honestly say the evening with Tim and Galadriel, his carer and friends and family was a delight. If I ever need affirmation that my time on this planet has been useful then this evening was it. I feel where ever my travels through life might have taken me this was always going to happen.I would not have missed meeting and playing for Tim for any thing and I would have traded any one of many special happy days to play this gig.

Tim used to play guitar and so when I began to play and sing for him he listened intently and watched my fingers with interest. I was seated opposite to where Tim sat and every one else had to sit or stand where they could. Every one clapped politely and enthusiastically but the little show was for Tim. Between songs Tim asked lots of questions and I learned a lot about where he was coming from, where he had been and that there was a time when the massive sound of an over amplified guitar was one of his great delights. He asked me about the new songs and told me one of his favourite old songs is Poppy so I sang it for him and he sang along. It terrifies me sometimes when it occurs to me that some folk know some of my songs better than me so I tried very hard to get it right. I do make mistakes and sure enough I made small error ( lol) while Tim sang the correct line. I can't tell you how good it felt to play for Tim and to see how much difference it made to him that I was there. If I could do this every day that would be my new job.

With a journey to make it was time to leave. I was aware that Tim needed to rest and get organised for the night and I didn't want him to overdo things. Better to be safe than sorry etc. I had a very special time with Tim. He is a brother now and I wish him well and hope that he gets to have what he can have while he can. I know he is well supported and that is so good to see.

So Tim it was a privilege to meet you and your people. I had a lovely time and you taught me lots. You are an inspiration and it was an honour to be asked to play for you. This brings me to the woman who made it happen. Thank you Galadriel for inviting me and good luck with all your ventures. I expect we will be in contact from time to time. Keep me posted on Tim's life and adventures and bless you all.