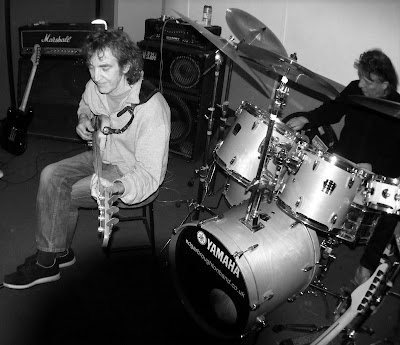 Hi folks. Well the EB Band has begun rehearsal again. We had a lot of fun last weekend. We are trying to add some extra sounds and parts to some of the old songs by fairly simple means i.e. running a stereo track from an I Pod with sounds and extra parts we couldn’t realise otherwise. One side has the parts and the other a percussive pattern for Steve to play along to. He has to wear head phones for this and in spite of this being a bit strange for him at first, he soon got to grips and it all went along quite well. Getting the tempo right as well as what the drummer listens to is crucial to it all working. The tracks were made including all the speeding up and slowing down on the original recordings but it was decided it would be easier to keep the tempos constant. Adjustments were made until Steve was comfortable playing to the guide. So there it is, extra acoustic guitars on Hotel room which allows for real slide guitar, the original strings on Evening over rooftops, backing vocals, the effects on Green lights and so on. We used this technique years ago when we used an old Apple computer to drive the patterns and parts Steve played to. 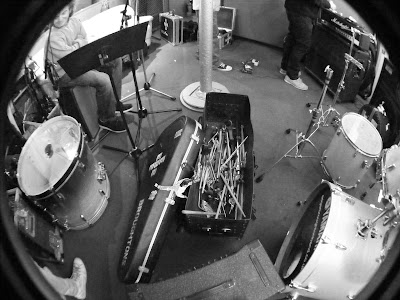 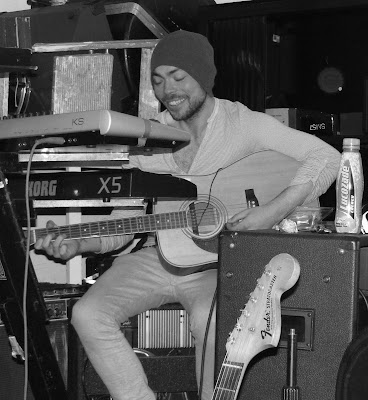 Luke is playing some acoustic guitar and I've got a few songs where I don't play guitar which is all adding to the dynamics of the songs. We are making some very subtle changes as well as some quite major ones. We’ve put Dr Spock back in the set along with Side by Side / Sister Angela, Night Hogs from Super Chip, Speak Down the wires, Roccoco Cooler and other old favourites. We are planning to put together a show that starts small and ascends through the set to flat out mayhem. I hope the above tech stuff isn’t boring. I know some people like to know how things work so I hope those that don’t care forgive the inclusion.
It was a good weekend made all the better by the continuing rampage of Liverpool F.C. Yer !Later on Sunday afternoon, young Sonny had a good work out on his dad's drums. It was a bit like listening to the fire of a heavy calibre machine gun stuck on automatic jumping around on a marble floor. Wicked innit ?
Pic below. 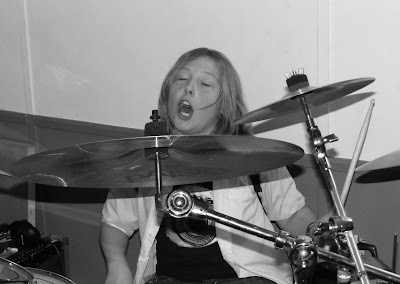 It seems Gordon Brown is not just a chip off the old block. There are signs that he is implementing some interesting and welcome policies. I was very interested in the announcements around citizen responsibility to look out for and to intervene for children at risk which came out of the govt white paper “Every Child Matters”. Perhaps this might be considered especially welcome at a time when a comprehensive survey stated UK children were more poorly served than in most other European countries and some non European countries.
This policy was rolled out as a new “duty” for all local govt / public service employees, at all levels. The idea was that this new responsibility would be extended to all citizens. I am not sure how this being implemented and how it is being progressed but it was/ is a good sign.
The latest development applies to all adults along the same lines. It involves the setting up of a pool of social workers across the country who will investigate any complaint brought to their attention in respect of treatment received in any public service environment such as hospitals , youth provision , residential care homes etc. If the complaint by any person friends, relatives or ANY member of the public is found to have substance then an advocate can be employed to pursue the case. I know this is about to run in some parts and it seems to me that this is the kind of idea I can totally endorse. Hey! this what I voted for and expected to get from Labour. I know it’s early days but let’s give it a chance. I know I bang on about the lack of labour commitment to the crucial things but I like to think I will also give credit where credit is due. We need a lot more accountability especially where the care of vulnerable folk are concerned.

So Sir Fred the banker is shaken that people have trashed his car and had a go at his house. I don’t condone the senseless vandalism lol but, nor do I care that he is inconvenienced. This is the tip of the iceberg and people will take what they consider to be direct action when they feel let down by the people who should have intervened to prevent him getting away with it in the first place.

R.I.P. Jade Goody. Perhaps thousands of women will be saved from the tragedy she faced because of her. Perhaps we should be extremely grateful that her loss will be of lasting benefit through her contribution to the seed change in public awareness around cervical cancer. Reviled she was but if we are to be judged by the harm and good we do in our lives then perhaps she has the edge on most of us. Judge ye not ! We didn’t look after her all that well after all. Did we?
Well I am off to learn the words to Roccococooler. I am probably a dead man if I turn up with a lyric sheet for the next rehearsal. No rest for the gifted eh?
Peace 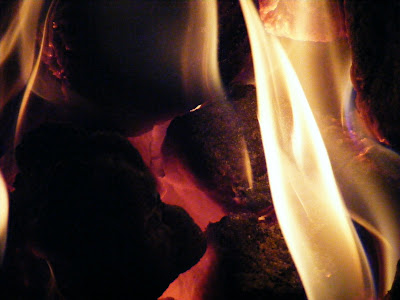 There is some thing timeless about the attraction of a fire in the open air or in the home. 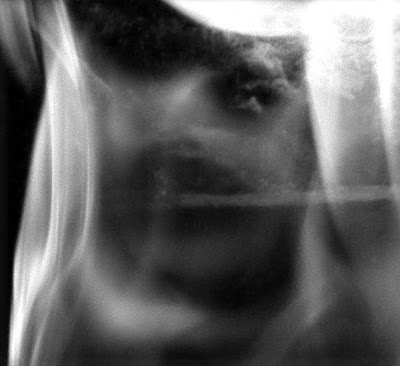 Like many of us I remember being a small child sitting in front of a coal fire, peering through the fireguard at the pictures drawn there in the flame and smoke. I still do this when the rare opportunity to sit by a hearth with a fire is presented. With the heat of the fire hot on my cheeks I look for phantoms among the dying embers. It is easy to see how this captivated ancient peoples and on through all time.
Taking some shots of a fire on a cold frosty night recently I was astonished by one image which is contained in the cropped pic above and shown below completely untouched. You can see the iron hearth through the fire and there he is up to the left side of the photo. I've met him some where before but I never got take his photo before ha ha! Any way, I thought some of you might find this amusing. 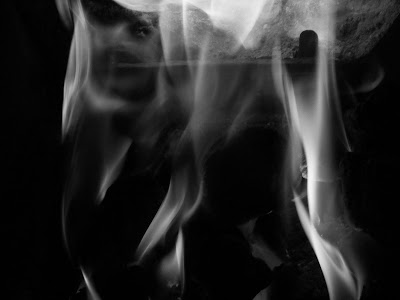 On looking at other photos I found some coals that had face like shapes so I filled these in with a few alterations. 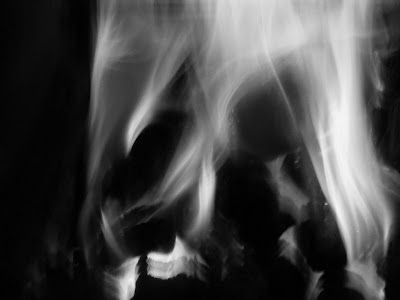 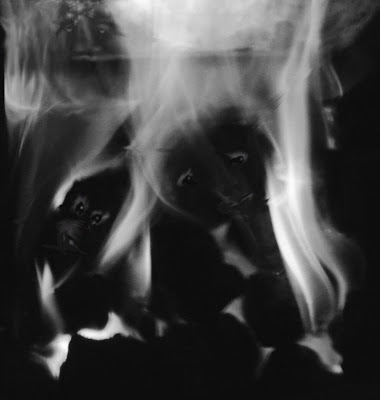 I am a novice at this but still it's great fun. If I am making some thing I am happiest. What could be better than spending an old fashioned winter evening with good company and ..... a fair few fire phantoms? 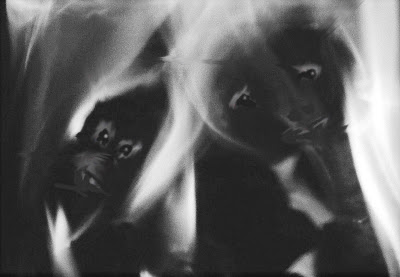