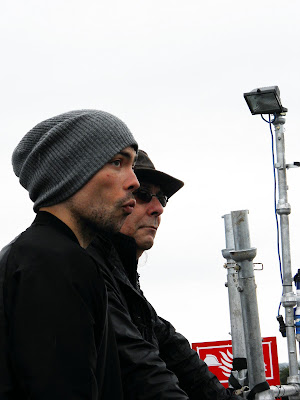 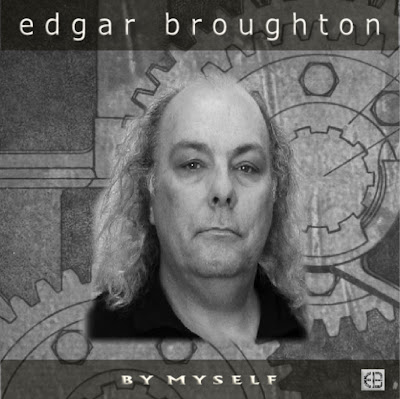 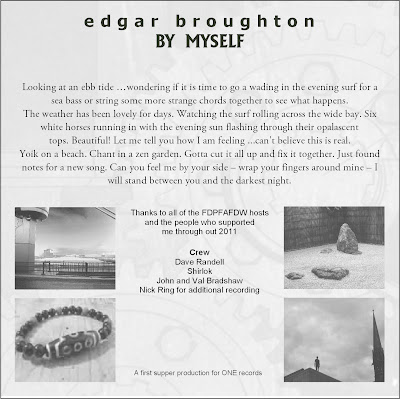 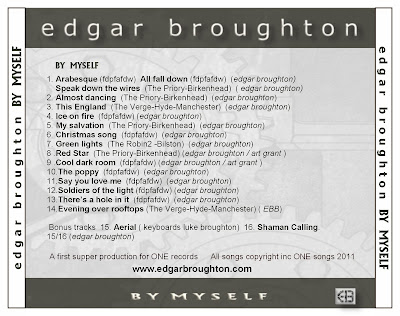 Thinks ....
So it was raining! Now dad has got rid of the bloody rain with his out demons out stuff but the sky has gone with it. Who wants a white sky?

Giv us a kiss then. Its raining and cold and need some cheering up.

Whadya reckon? Shall we have a shave or not then?

I need wellington boots for my mind. I am ignoring that talking spot light.

Edgar : No its not a talking spotlight its a camera and its taking pictures of this song I am writing, even through this special hat.

received my copy of By Myself yesterday,if anyone does not buy this album they must be mad.The quality of the music is superb,the recording quality is amazing considering the equipment used.The songs both new and old are to Edgars usual high standard.Long live a musician and poet of incredible talent.Thanks Edgar for another brilliant album.

One day Luke , this will all be yours!

Quick Luke pout! I can see paparazzi to my right.

Please Pa, concentrate on the lyrics now, I hate it when you're singing the wrong words....

One day Dad you too will enjoy an aniseed ball.

By myself arrived on wednesday and today was the first chance we had to listen. WOW! This is really great. Like being there. The song writing is superb and the voice ..... swoon!

Look, I don't care if he is your son, he's not getting in for half price!

And I still have'nt found what im looking for.

I suppose some people would think this is glamorous.

20 flippin minutes.. no one has offered us any drugs and there is no sign of any groupies... its the last time we play Glastonbury was'ent like this back in the 70's!

when did you say the bus was due?

what time are Budgie on!

'Dad when are you gonna do another caption competition?'

dad says to son rather smugly. "do you think you will ever do anything as good as Wasa Wasa". Thought not, us oldies are still the best:-). Zappa 56

I know Luke, we could sit here all day ,you might get a bite you might not, fishing is all about being patient! so stop sulking and pass me a maggot!

well.. I thought we were invited come to Glastonbury to play.... not to build the stage!

"and I thought you had put the guitars in the car!"

I can't get a note out of mine either. Maybe you blow across the end?

"Did'ent know Faust were on the bill".

I really don't think Glen Sweeney is going to reform The Third Ear Band, so can we go home now?

'Do you think the onstage times will run pretty much as they say on the itinery?'


'Well, with festivals it's quite difficult to predict. Sometimes they can run late, and sometimes they can even run early. It's all down to how many unforseen circumstanses the festival organisers are faced with. So in the light of that Luke, I'm very reluctant to pass any comment that would sufficiently satisfy your need for a definite answer there.'

'Oh right. Thanks for that dad.'

stuff this, its the last time I go carol singing with you !

Well done to those who won the comp :)