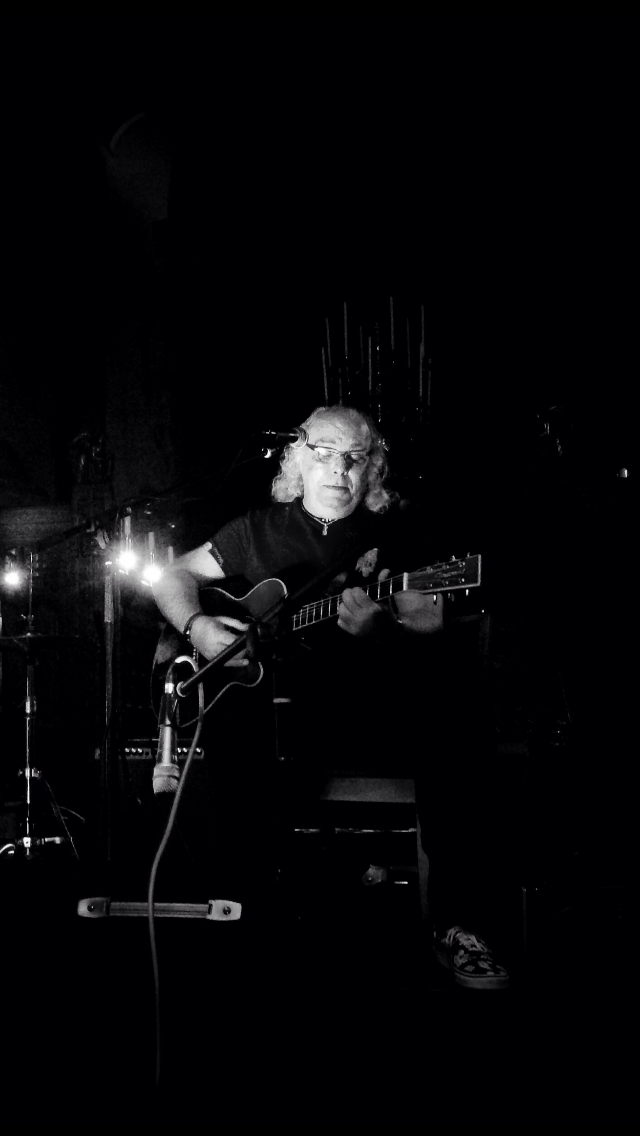 Final preparations for the concert in the church at Upholland were coming to a close by Thursday evening. My rehearsal with the St Thomas the Martyr church choir for their chorus parts on the song Our Daily Bread was a fairly short affair. I had sent them an MP3 of the song and they were soon singing the song. I really enjoyed this at the end of what was a long day. The rehearsal with Ella and Brenda for my improvised yoik piece was even shorter. We had quickly reached a stage where it seemed that we should leave refining any thing and yoik some thing on the night. I think the concept was understood and so we left it there.
The day had seen our electrician Ken fix the church chandelier and test all the electrical gear. Other lighting was minimal and a few spots supplied by Richard Hart, our sound engineer, fitted in nicely. I wanted the interior of church to be seen and enjoyed rather than fill the stage area with flashing lights and other rock props. So many people worked hard through out the day and we managed to sound check a couple of the local artistes who dropped by to check out the church and the stage set up.
Friday saw me in church after lunch. Luke was first to arrive by train. Arthur arrived soon after and we got his bass sorted while we waited for Steve, Rik who was to record the show and Ramblin', my mate Dave Randell who was driving them from London and who would be taking photos on the night.
Soon every one was sound checked. The stage was set and the die cast.
So many people had worked hard for this and many hours of preparation had gone into the planning and execution of the various aspects of promoting and rehearsing for a show like this.
By eight oclock on Friday evening the church was nicely filled. Ian, who had supported the project from it's early days, started the evening with a cool compere style and he kept the show moving along nicely between acts through out the evening. There was an expectant atmosphere as the concert began with Leah Wallis. Leah is a fourteen year old singer who opened the show with a lovely version of the show song I had a dream. 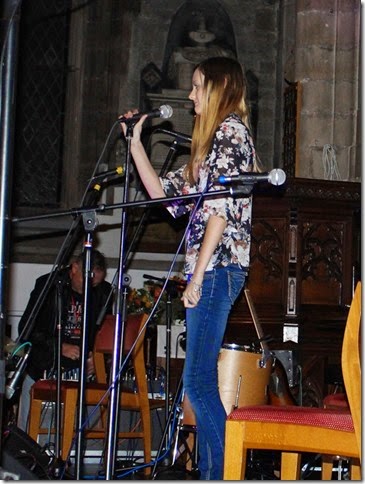 As I listened to Leah's vocal soaring around the stone walls of the church, I began to relax and enjoy the wonderful acoustics of this very beautiful place. Her choice of song seemed a perfect opener as a dream was where it had all began. I stood at the back of the church with Arth and Steve and I admit to feeling a little proud of what we were doing and that all the voluntary work by so many was coming to fruition. 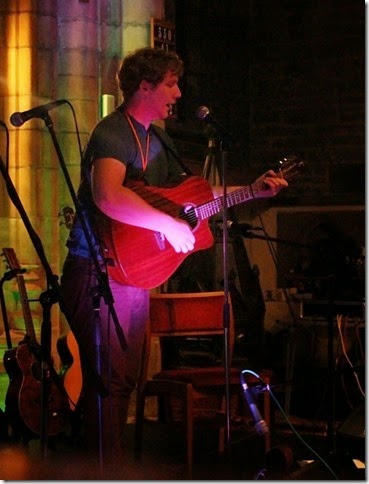 Next up was Joe Kirkbride who performed a song of his own. Every one had tried to choose a song that would fit with the theme of Our Daily Bread and the ethos of the event. Joe's song was about being down and the support of a friend. My son Luke remarked how Joe had all the traits of the north western approach to song writing. It is easy to see why so many great song smiths have emerged from the north west.
Next on stage was young Sam Birchall who is thirteen years old. 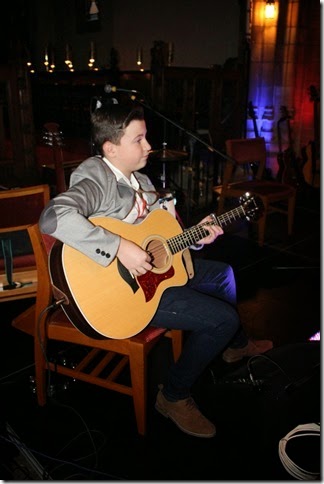 He played Here Comes The Sun by The Beatles as an instrumental on acoustic guitar. It was a real treat and like all of the young ones on the bill he will go far. Sam stayed on stage to accompany Olivia Garcia as she sang Imagine by John Lennon. 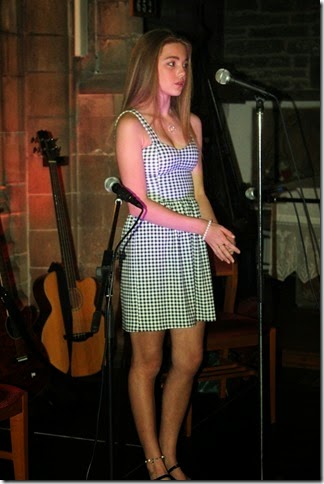 I was becoming quite emotional as I watched the thing I had imagined take shape. It was a lovely rendition and as they did for every act, the audience burst into delighted applause as the song ended. 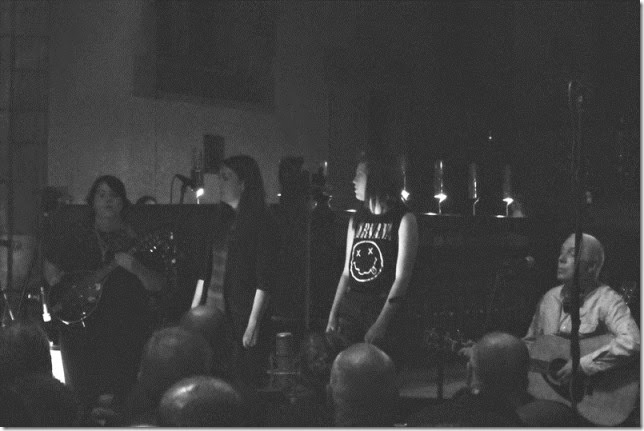 Next we had Acoustic Routes. A lovely family act that have the trad folk sound down. Mandolin, acoustic guitar and four sweet voices. Celtic sounding and pure. What a great way to pause on the journey before the next phase!
So it was time for your's truly to take to the stage and the audience gave me a very warm welcome. It was all coming together. I knew we had sold enough tickets to give The BRICK a nice sum for their coffers and with the contribution from Mike and Julie at The White Lion via the barbecue and beer sales, now it was all about the music.
I played five songs and then Brenda and Ella from the church choir came on to help me perform our experimental yoik. No words just sound and vibes. This was so good! It just came together in a moment and there we were, out there some where new. I know for many in the audience, the yoik was a high light of the evening as it was for me. My good friend Jarle who came from Stavanger in Norway to see the gig, said that I was beginning to sound like a Sami. Praise indeed.
There was an interval of half an hour while people got a drink and some barbecue from the White Lion. The church bells, silent during the first half of the concert, pealed to announce the second half.
Hilary Hanke, the vicar, spoke about the event and how it had developed and then Louise from The BRICK homeless project, spoke about the project and thanked every one for their good work. 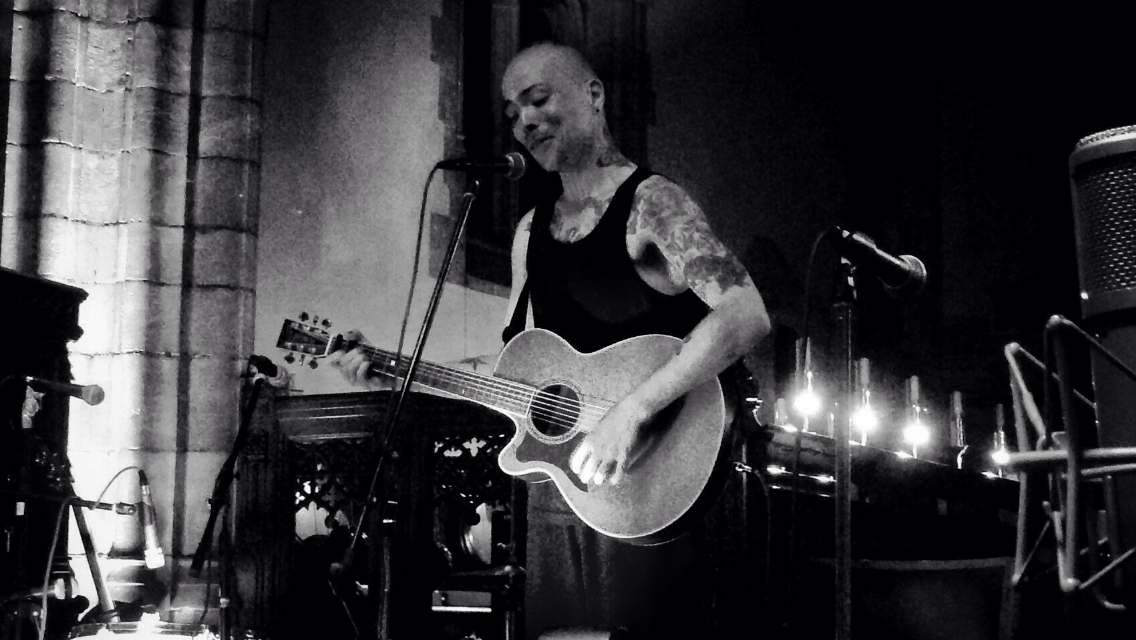 Next up was my son Luke. He performed three of his own songs in his very distinctive style and that all went down very well. He has a lovely song that brings me to tears. It did at the sound check but I kept it together during the show.
So next was me, again. I sang a relatively new song On the news which is about that little black girl who stares out of the Oxfam, et al, adverts for aid. Of course it isn't necessarily the same child but it could be and I am sick and tired of seeing her sweet little face, so sad. 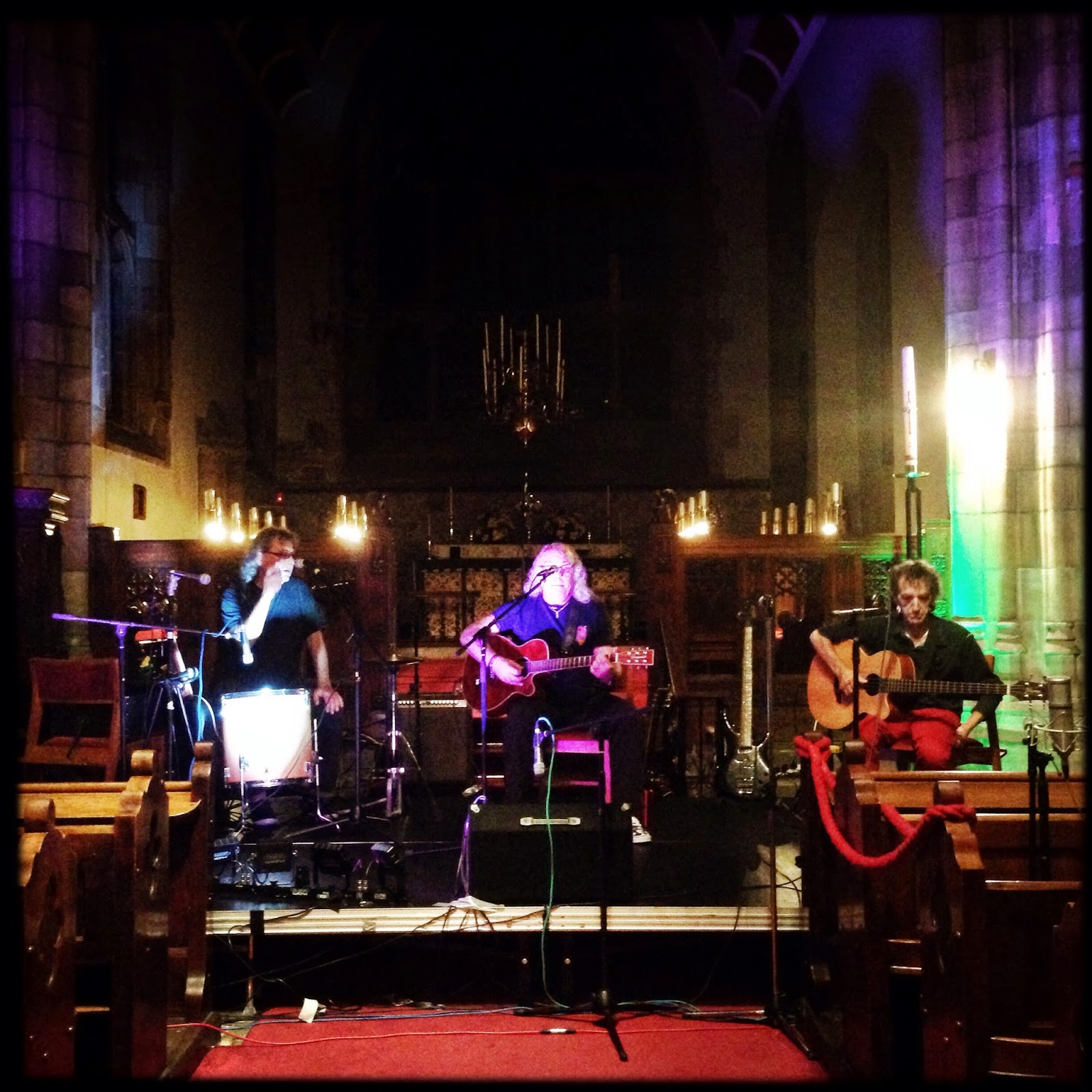 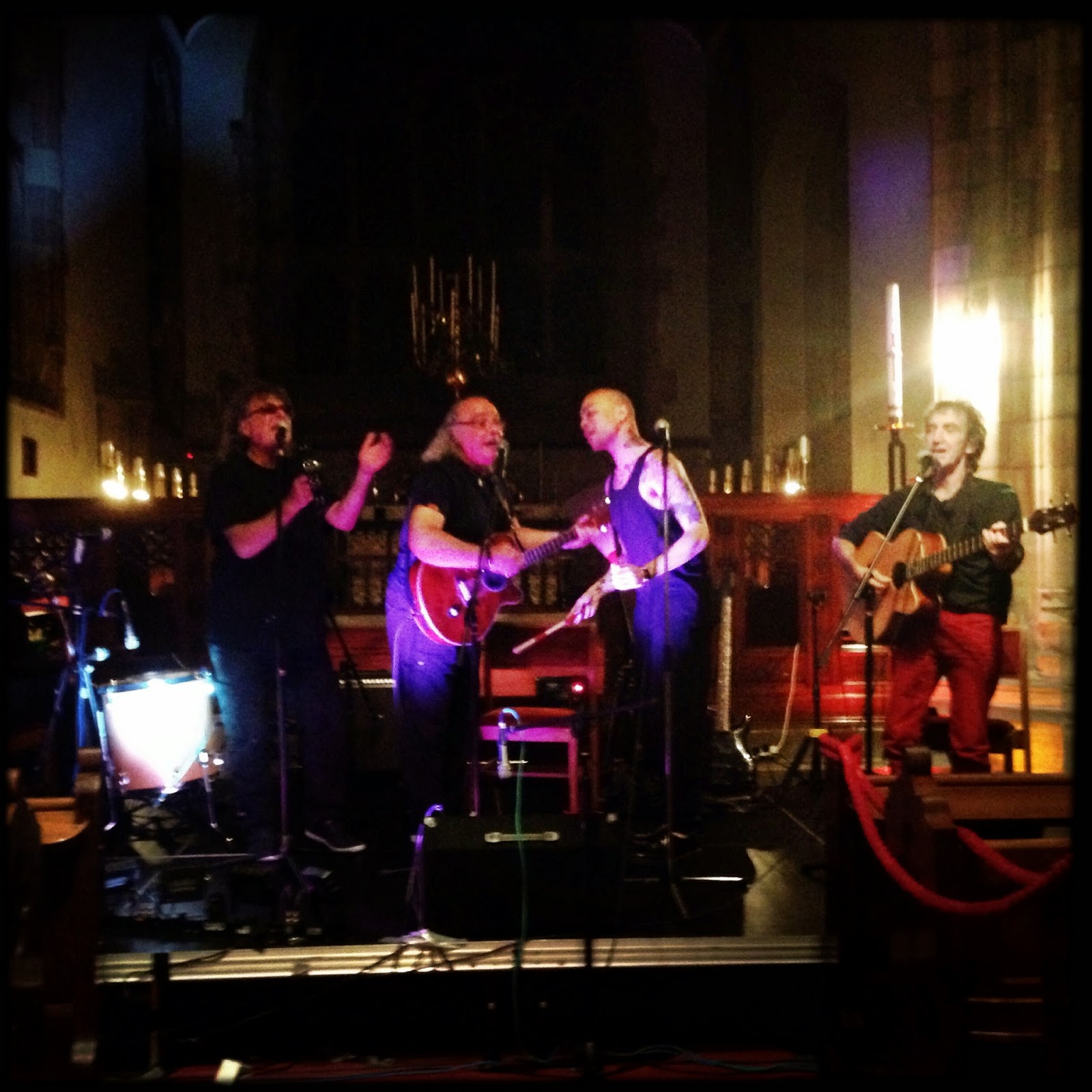 After this Arth and Steve took to the stage and we played a selection of old and new songs. It was so good to have the guys with me again. All of the rehearsing and planning had achieved it's aim and we were all very happy to be there. I had written the song Our Daily Bread for the show and the church choir joined us for the choruses. What a nice noise that was! 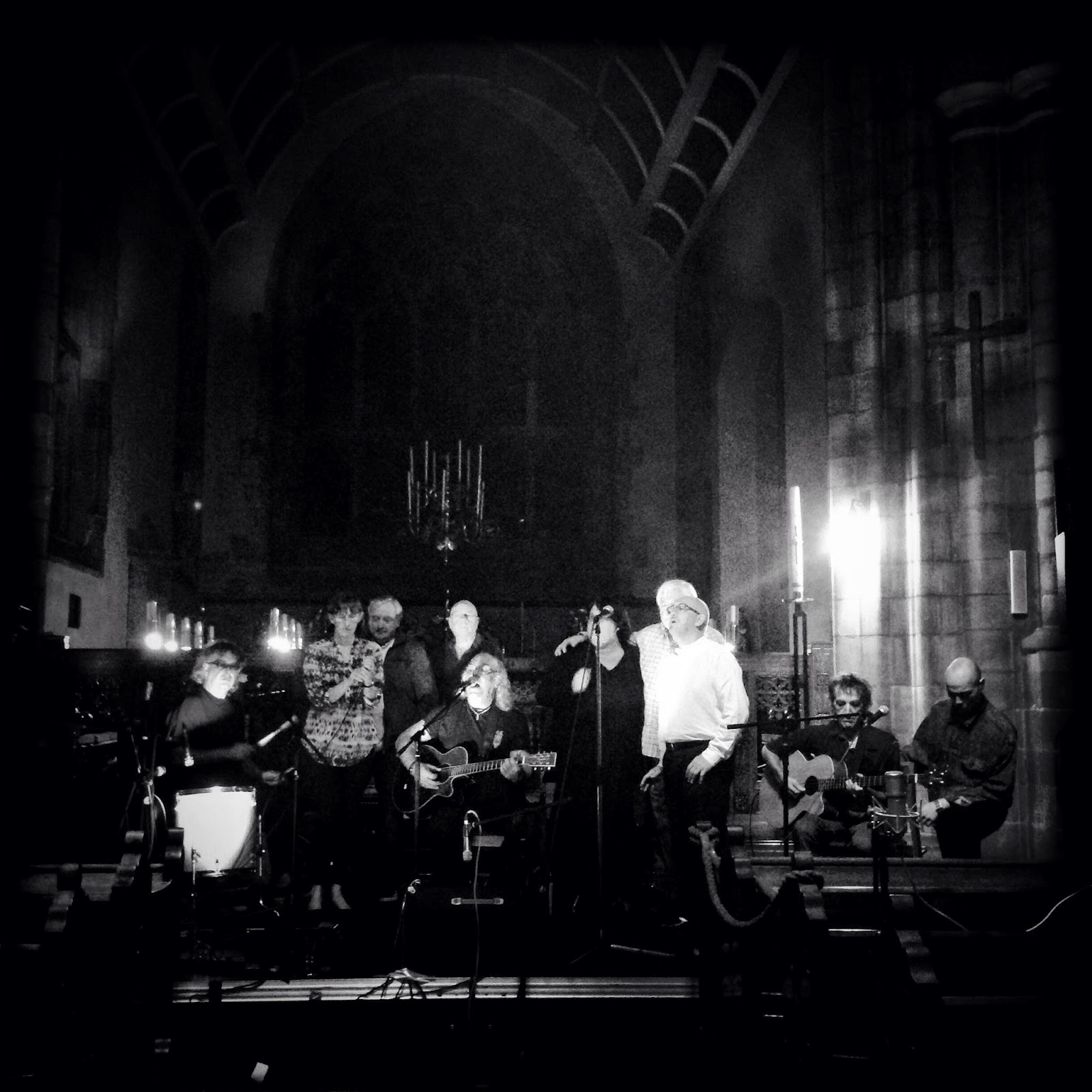 A rousing Poppy was the encore and then it was over. Wonderful!
Special thanks to Hilary and Ian and Richard, Sue and Mike and Julie, the Totally Wicked shop, Dean for his wonderful art work, Clusky for his special vibes, Ken for his electrical supervision, all of the church community who supported and worked for the event, Winstanley College for filming the event and my special thanks to Val and John Bradshaw who look after me and work hard to support my dream. If I have left any one out then I am sorry.
So it was back to John and Val's for the apres gig party and some top snacks. Apparently our audience had cleaned out the barbecue stocks and no one thought to save us any ha ha! Actually Val had a back up plan, as always,  and we all tucked in. It was very nice to have every one together and we all sat up very late enjoying the company. The drink flowed and eventually it was time to retire after what had been a momentous day. It was great to see old friends at the gig and many folk for whom I had performed FDPFAFDW shows.
Onwards and upwards. It looks like there will be spin off events from this and I like that. Thanks to all who supported OUR DAILY BREAD. I hope this event will be the first in a series and a sign post to other fund raising events in churches, by the people.