Hi Folks. I intended to write a post election piece here but tragic events overtook that and it seemed inappropriate. It also seemed like bullying to wade into reviled and feeble May and her shattered supporters as the scale of her defeat became clearer. To win but lose so much is unprecedented in our political history.

We watch as Tory policies of unlimited austerity, dementia tax and a lot more are shattered to pieces in the wake of the election. In the Queens  speech today Corbyn spoke with a new vigour. The dissent in the labour Party is very muted now, almost nonexistent.  May sounded like she might burst into tears and although we saw a little of her pissed off Thatcher face she is a defeated woman and the haughty conviction is gone. Tory policy is bankrupt of new ideas. It has nothing for the young and has managed to alienate it's own older voters.

Rupert Murdoch has spectacularly failed to oust Corbyn as a viable contender in the new battle for hearts and minds. A battle where reason over profitable expediency rules the day. A fair days pay for a fair days work. Where it is argued that the vulnerable and needy should  get what they deserve. Where dignity and belonging is restored. That public services will be restored and the people who look after us are properly paid and acknowledged. That social need is always a priority over greed and that the only way to overcome the terrorist doctrine is to stand together with all the good people of all faiths and creeds, genders and nationalities. A new way. A new day. We won't get this from these Tories clinging on to power for dear life. Who would have thought that she could even consider the idea of a pact with the DUP?

Life goes on.
Many years ago the EBB met a guy called Bruce Barthol. He had been the bass player with US band Country Joe and the Fish. The EBB met him when we with Blackhill Enterprises. Bruce was then in a band called Formerly Fat Harry and also with Blackhill.
We played quite a lot of gigs together and our paths often crossed on the road. When we were recording Hotel Room Bruce lent me his Martin acoustic guitar for the rhythm parts. Country Joe had given this to Bruce as a gift. It was a pig to play with fat strings and not really an Edgar Broughton action. It also had a small crack as I remember. It sounded fantastic though. So much so that it was decided to overlay the acoustic guitar parts many times. By the end my hands were cramped and blistered.

Any way I am playing a gig with Bruce at The Rifle Volunteer, 141 Reading Road, Wokingham, Berks RG41 1HD
-this coming Saturday between 3pm and 6pm. So if you are nearby drop in. It was a lille bit short notice but I suspect it will be some thing lovely and different from my usual gigs, so here goes. Looking forward to meeting up with you Bruce.

Recently I finished the lyric to a song I have been working on for months. That means mostly sitting around playing the chords and hoping something would come of it. Finally it did and here is the lyric. 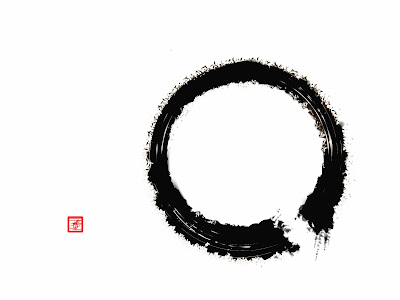 peace
Posted by edgar broughton at 18:40 No comments: 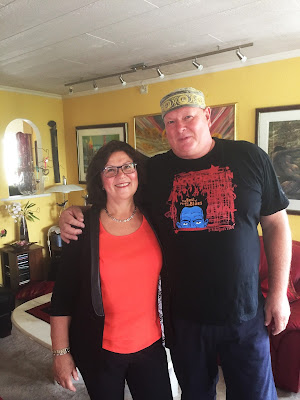 To say I couldn't be more pleased by last nights UK election results would be some thing of an exaggeration but I admit, I was pleased to see May so humiliated and Corbyn vindicated. Her decision to hold this election must be one of the worst strategic decisions by a UK prime Minister in the history of elections. Given the criticism of London that springs from all over especially in the north of England, I must say that I am very happy to be living in London now it is both the Remain and Labour stronghold. That said I will write more on this later but for now I have to tell you about my latest adventure in Norway, fast becoming my second home.

Over the years I have become increasingly fond of Norway and the Norwegians. Every where I go I meet the nicest people who I seem to be able to connect with easily. As I have said before, most Norwegians speak very good English and this helps connection though I am sad to say it doesn’t always inspire a need to learn Norwegian.

I arrived in Stavanger after a couple of hours delay to my flight. The weather around Heathrow was blamed. It was good to arrive eventually. The time spent waiting to fly is going up all of the time and there is a part of me that is beginning to ask if it is worth it. Whenever I arrive that idea is banished and I have the best times with great people.
I slept well at the house of my hosts Lill and Jan Magne Pedersen and awoke to a magnificent break fast with English Breakfast tea, wonderful. This FDPFAFDW event was for Jan Magne’s 60th birthday party.

I made a short soundcheck late in the afternoon with a small AER acoustic guitar amplifier/ p.a. It was a gorgeous little system and sounded very good. I am thinking about buying one. The gig started about 6.30 pm after waiting for a couple of people who thought the party was the following week. I guessed they were important guests because we waited for them to arrive. Once every one was settled in I began to play. I knew that it was likely some people would not have heard of me. They usually check me out on Youtube and are often very surprised when they hear the new me. It went down very well. When in Norway I am always surprised when people tell me they like the stories as well as the songs. Most people understand the nuances and humour in my tales.

Magne sang a couple of songs during the event. For one of them he chose to wear a dress and a ludicrous blonde wig. A very funny man with a great sense of occasion, he had the collected friends falling about laughing.
Magne was a famous goal keeper in his youth and I think his experience on and off the field has contributed to his big personality and how he presents himself. Lill and their daughter Lena made touching speeches and the party rocked. It was so nice. I took a break while we all ate and after a couple of cognacs I played a few more songs including We Heal, a new song which got its first airing specially for Magne. The evening wore on and outside it was near daylight at midnight and beyond. I am totally entranced by the light in the summer nights.

After saying farewell to new and some old friends I headed back to the house. It was a job well done and it had been a very special party. I was staggered by the amount of alcohol provided by my hosts for the party and surprised at how many full bottles of wine, beers and spirits were heading back home with them. I think they will be supplied for months to come. I’d met some fine people and had some fascinating conversation. Many people were interested in the Brexit thing and what was then the forthcoming UK election. For me the the best thing about these private shows is that I get a chance to learn some thing about where I am and what is going on there.
Sunday really was a day of rest hanging out with some of the guests from the party, relaxing with the Pedersens. 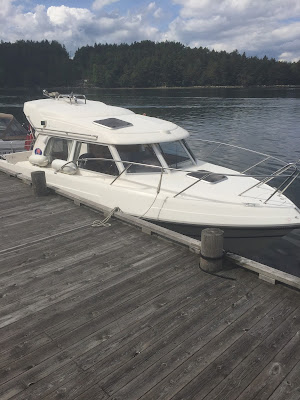 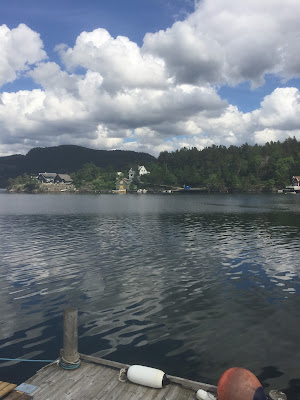 Next day was about the invite from my friend Ingwe to go out for the day on his boat for a little fishing or in my case as many casts as I could possibly fit in with out seeming to be anti social. Last year when Luke and I were in Kristiansand and Stavanger we met up with our friends Jarle and Ingve and stayed with Ingve and his wife Hetta after the Stavanger show. Next day Ingve took us out on the fjord for a cruise around the islands. 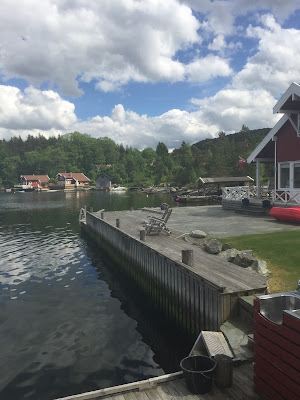 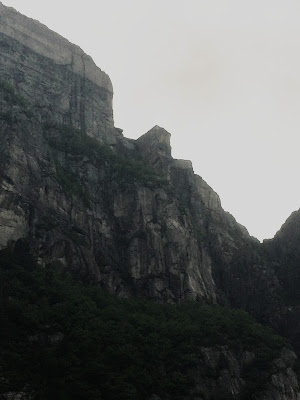 So this was my second outing on the boat. I drove for a little way out of the harbour until we were in open water. Soon we were on the fjord underneath the world famous Pulpit Rock which hangs over the fjord. It was amazing to be sitting right under it on Ingwe’s boat.

I threw a lure in the water as often as I could when ever we stopped for refreshment or to meet up with people along the shore. I just have to keep going on the basis that the longer a lure is in the water the better chance there is of catching a fish. At our first stop i connected with a very small sea trout. I have not caught one before so that was interesting. Another bigger one came by later but that was the only fishing excitement of the day. Still as I often say , it is called fishing not catching. 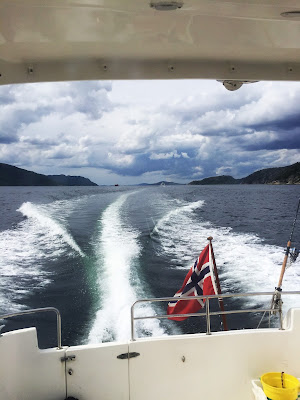 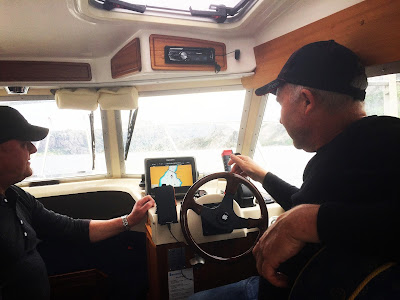 Captain Ingve at the wheel 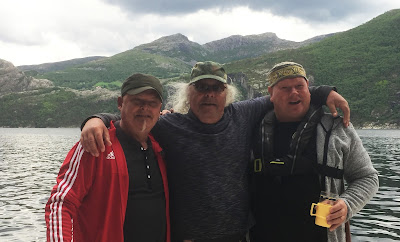 Our last pause came as the rain began to fall and the light turned brooding over the water. We were visiting a friend of the guys who had not heard of the EBB though his sister turned out to be a fan. Soon we were listening to Hotel Room at full volume as we sat outside under shelter as the rain poured down. It felt surreal listening to our sounds and telling tales of the old days while looking out at the mountains on the other side of the fjord where long ago the Vikings had sailed by to their nearby settlements. 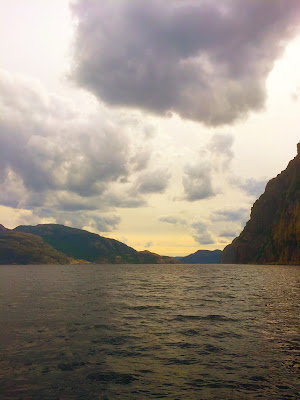 It was getting late though still light as we headed back through driving rain to Stavanger harbour where we said our farewells, vowing to meet up again next summer. It had been a glorious day in both sunshine and in that evocative, brooding darkness that can fall across the landscape at any time. It had been an unforgettable day of fellowship with much laughter, sharing stories with good men and enjoying Ingve's very fine home made lager and Magne’s super sandwiches with a little cognac.

Next day I was homeward bound. The journey home was horrendous with delays and train breakdown just outside Heathrow Airport. I finally arrived home at 11.30pm instead of 7.30pm so I was a bit annoyed by that though nothing could diminish the good feelings I had about the trip to Stavanger and I am already looking forward to going back to see my very good friends.


Thanks to Lill and Magne for their wonderful hospitality to Ingve for the boat ride and all who made my stay so special.