Most of you will know some thing of the story of M ( his name is not Mohamed) and some of you have contributed to his "escape" and security. He is safe and accomodated and has his own personal key worker to assist him on his way through the labyrinth of procedures towards finding a permanent home. Mean while he is in good spirits although he has , understandably been through some tough days. His benefits are now arranged and so yesterday I gave him the last of the money you gave and he gave me the written note below. First Supperists be proud.

Words can not really express how thankful I am to each and every one of you.
Firstly I would like to say thank you very much for your help. I hope I get the chance one day, hopefully, to thank you face to face.
Secondly I was very surprised that theres so many good people out there that are ready to help even tho you don’t really know me, you still help me and I am very thankful.
Thirdly I just really want to say may God give love peace and sympathy on all of us. 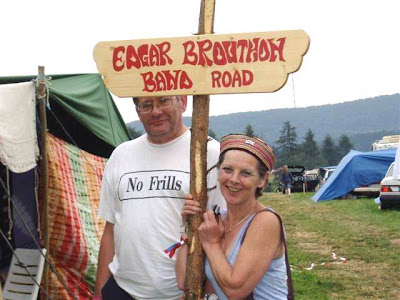 With the over hanging tiredness of last weekends epic expedition to Germany beginning to fade and the good memories overcoming, the above image is very fitting. Photo by Lincolnshire Tony of "Nick and Vanessa posing!” The creative spelling kind of fits with the weekend.
I have begun working with some of the young people I will be working with in my new post. We spent an afternoon picking fruit and veg in the rain ( Yes! I know ) on a farm just outside London. I had forgotten how loud it can be in a minibus full of 14 – 16 year olds.. It was great to see their enthusiasm and see the way they interact with each other. Next day was spent cooking Caribbean food with some of the veg and fruit. They made jerk chicken, rice and sweet corn, plantain and lamb. Delicious! I made a few new friends and had a little disagreement with a lad about wearing his seat belt so we’ll have to see how that proceeds. I am surprised at the diversity of the work I will cover in my new position and there is lot’s of scope for new ideas and projects. Mean while it’s all about the summer, such as it is, so we are mostly out and about taking part in a wide range of fun things. I’m looking forward to the boating next week.
I just watched Brown and Bush speaking about the “ special relationship” in respect of the “ the war against terrorism”. If ever a man sounded like his brain was starved of oxygen it is Bush. He made our Gordon sound like a supreme communicator. Brown also had the better suit in my opinion so there! Bush is a dangerous fool and this piece of television proves it. It must be his single worst attempt at addressing the world. He bumbled and fumbled for some thing cogent to say and never managed it for more than a second or so. I suspect the “special relationship” will change quite considerably over coming months. Brown hinted at a desire to step back and take more of a supervisory role. Four more Brit soldiers died in the past week so it cannot go on like this surely? During the first world war it was suggested that a good way to end things would be to stage a Queensbury rules boxing match between the leaders of both sides. This was alluded to in the Frankie Goes to Hollywood epic Two Tribes. Today we could send our leaders to the desert for a survival type reality show. We could vote for who is going to get out alive. The participants would have to learn to live with failing equipment, unsuitable supplies and dodgy compasses.
I managed to get out on the bike on Saturday for a quick tour of the east end of London and docklands. I rode about 30 miles so it was quite useful. I have decided that it is far better to get out and ride the bike rather than sit glued to TV coverage of the infamous Tour De France. I will say that it is now that the “old doping guard" of the TDF should move on and away and leave things in the hands of the great, young and clean riders coming through. I think a life ban should be the penalty for all sport cheats at this level. I am still gutted by what took place this year. Bradley Wiggins Brit bike hero said “ I had a dream as a kid to ride in the Tour De France. Some riders in the peloton (all the riders) have pissed on that dream”. Nuff said.
The EBB is making plans for recording and for the autumn gigs. We are currently looking for a new place to rehearse and record. We had been rehearsing at my last place of work and we are going to miss it. If any one knows of suitable premises in the London area please let me know. There will be a few overdue changes on the site soon and we have changed the contact address to one that works.

The EBB album Inside Out had “one of the most innovative sleeves of it’s time”. SOUNDS

For those who have never seen it the sleeve was a card board creation that folded and turned in on itself in a way that is difficult to describe unless you have the thing in your hand. The title described both the sleeve and the view point of some of the songs. For me personally the time spent during the rehearsing and recording was a little inside out. I was a bit confused and probably a little lost, if I am honest. Any way – there is a copy of the re – mastered CD Inside Out for the best suggested title for the next and NEW EBB album. I am not saying we will use it but you never know. Same rules as usual. Make as many entries as you like in the comments section of this post under different names. If you win you can email me your postal details and it’s yours. The competition will be judged by Dave Cox.

Posted by edgar broughton at 21:44

How about Soldiers of the light ?

"It's YOUR fault wer'e still here"

How about 'For our Chilrdens sake'

Hi Rob, I'm glad to hear the new work project has got off to a positive start. I wonder how many inner city 14-16 year olds know where fruit and veg comes from. Picking your own and cooking it afterwards is a pleasure I only discovered at 50. Great stuff.

So far Brown has been ok - cleverly letting Bush make him look good yesterday. Time will tell.
Which is a good title for an album - Time Will Tell - or in EBB's case - Time Has Told.
How about EBB and Flow.
Or if you want commercial success, how about calling it 'Robbie Williams Greatest Hits' !

Love your brand of surrealism - so I nominate " The far off sway".
I read the name in your writing. What is it?

Hi Jen
The Far Off Sway is situated between the Long Boundaries and the Wide Meldings. It is a phenomena caused by the God Light Pop which do make angel sound encircled and first discovered by the folk who inhabit the Instantanium. All shall be revealed - these are the days.
x

the title gotta be

These are the days

you said it Rob
if it wins give the cd to the lad who had a disagreement about the seat belt!

How about "Gone Fishing"
Glad your new project seems to have got off ok.

'Gently down the stream'

'Before the big sleep'

'Return of the New Brooms'

'The Demons are still with us'

Dave Cox - Guitar Genius!
How can I lose ?

'Tony Blackburn's record of the week'

'THIS is Dave Cox'
(with special guests)

'It takes a little longer'

Wot about - 'Open Your Eyes'
or
'Do our Children have a Future?'

Surely it has to be "The First Supper". Change Michaelangelo's "Last Supper" painting to have Rob presiding over the scene with members of the band and other worldly wise infamous characters as the disciples.Should create a bit of controversy too perhaps.Controversy = publicity too!There we are,title and artwork in one go.No fee charged either!Blessings,Adrian.

1 TRUTH FOR EVER AND A DAY.
2THE LONG JOURNEY TO EQUALITY.
3COMING HOME TO HEAVEN
4 FOR THOSE WHO CARE.
5 WILL IT EVER END?

THE SUN THE MOON THE SKY AND THE STARS AND DESPAIR.

With all the floods happening, I've been thinking about converting my shed into a house-boat!

Use the image on the t-shirt and call the album "Edgar Broughton Band-Heaven Help Us Now!"
Keep it looking mean! No offence guys,honest!
Cheers,Ade.

Ps.I remember when I first came across EBB band albums in my local record shop,looking at the covers and thinking who are these guys!The Inside Out cover was a masterpiece really.Looking inside I remember being intrigued by the urban/rural contrast and relating to that conflict in my own heart at the time.How much if any of the EBB music I had heard at that time I can't recall.But there was so much hair on those guys then that at the time for me that equated with credibility!So I had to listen to it.I thought it was a classic actually,and still do.Brilliant stuff,really related to it.Points out of 10? Definately 10!!
All Blessings,Ade.

Edgar i am a British EEB fan living in New Mexico USA.Is there anyway i can buy the new T Shirt by mail.Please let me know.I dropped a word into the water,it finally fell into the sea.
Michael Joyce

Rob, Just read 'M's piece - Could you tell him, we were simply glad to help another human being, and if it means he is able to do the same one day, then it was more than worth it. Hopefully, we can all get together one day and say hi in person. Good luck, and keep safe.
Peace and good friends to you