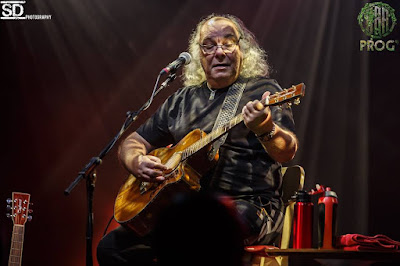 
A week ago i was packing and checking my guitars in preparation for the HRH Prog Fest in North Wales. Next day my friend and some time roadie John, set off from North Cornwall to pick me up in London and drive me to the gig. We set off at about 2.30pm and arrived at around 7.30pm. With one brief stop we made good time.

Our chalet on the Holiday camp site was quite large and well appointed. It didn't take long to get the place warm and get ensconced. John had intended to catch the last act of the Thursday night show but never got around to it. By 1.30am we were both in our rooms and ready for bed. I knew John would sleep after his mammoth drive from Cornwall but I was surprised when I woke up feeling refreshed and ready for action at around 9.30am. Well, ready for action, might be a slight exaggeration. It takes me an hour to wake up ideally.

I was due to play at 2pm so it was the breakfast shift as far as I was concerned. After getting ourselves organised for the day we made our way to the venue and after a smooth and quick line check, I was ready to go. Last time at this gig I went on after a couple of bands so I was a little concerned about how many folk might be in the venue as i was starting the proceedings. I needn't have worried. There was a large crowd when I began and they were so nice. They listened and responded positively to every thing I did and said. It was lovely. Always determined to finish on time, I keep an eye on the passing time but I found myself unusually, with two minutes left at the end of the song The sound don't come. The stage manager thought it hilarious as I proclaimed " Shit, I'd better leave it there then. The audience laughed, I said my farewell and left the stage. It had flown by as is always the case when it's going very well.I have to say technical support at the HRH gigs is excellent. Quick and effective technicians providing great sound and lighting. 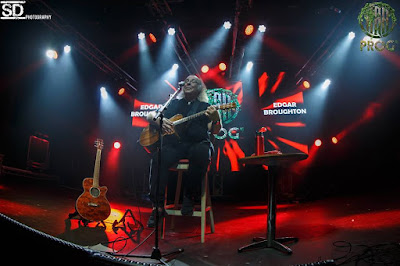 After the show I bumped into Mick Box and Bernie Shaw from Uriah Heap. We keep meeting at gigs recently. It's always nice to say hello. I think back to the days we first met on a German tour. None of us could have guessed we would still be playing at the age of 70. Mick reached 70 in June. 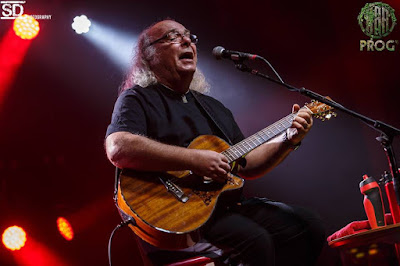 John and I left the gig at around 4.30 and drove back to London with just a short break. John dropped me off and set off for Cornwall arriving at around 4.30am. He has amazing stamina. I am very fortunate to have the best people looking after me. I am spoilt. My very good friend Rambling will be taking me to the next and last gig of 2017. I'm playing Southampton Uni with Carl Palmers ELP Legacy so that could be interesting.

I have some more gigs on the Gigs page in 2018. I'll be playing with Roger Chapman in Leicester, London and Newcastle. After that I will be playing the Kinross Green Hotel and Golf Club and then Skegness British Blues and Rock Fest. I'm taking all of February and most of March off to record. I plan some bass fishing in the Spring with the Bradshaws in Cornwall and a trip to the West Coast of Ireland for some bass fishing with guide Henry Gilbey who I have always admired. I can't think much past the Spring right now and Winter is far from done with. Thanks to all for your kind birthday wishes and greetings. I have had the best year so far and I shall milk it to the end ha!

I have a few days off now until the Southampton show so I will be writing and recording the album. I began to think about possible titles a few days ago so that is always a good sign that things are finally, properly under way.

Christmas looms and in my next post here I will be having my seasonal rant with a few seasonal statistics that I think will give pause for thought. Meanwhile I have to declare that I will be spendng some of Christmas with my brother and other family members this year. A family gathering is some thing Steve really wants so it would be churlish to be missing. I have a caveat or three though. I won't be playing any party games and there will probably be a few other rituals I may have forgotten and am not willing to re visit. That said i will play my part and try not to be the grumpy old man ha! Only joking!


Look out for my next post - In the bleak mid winter.