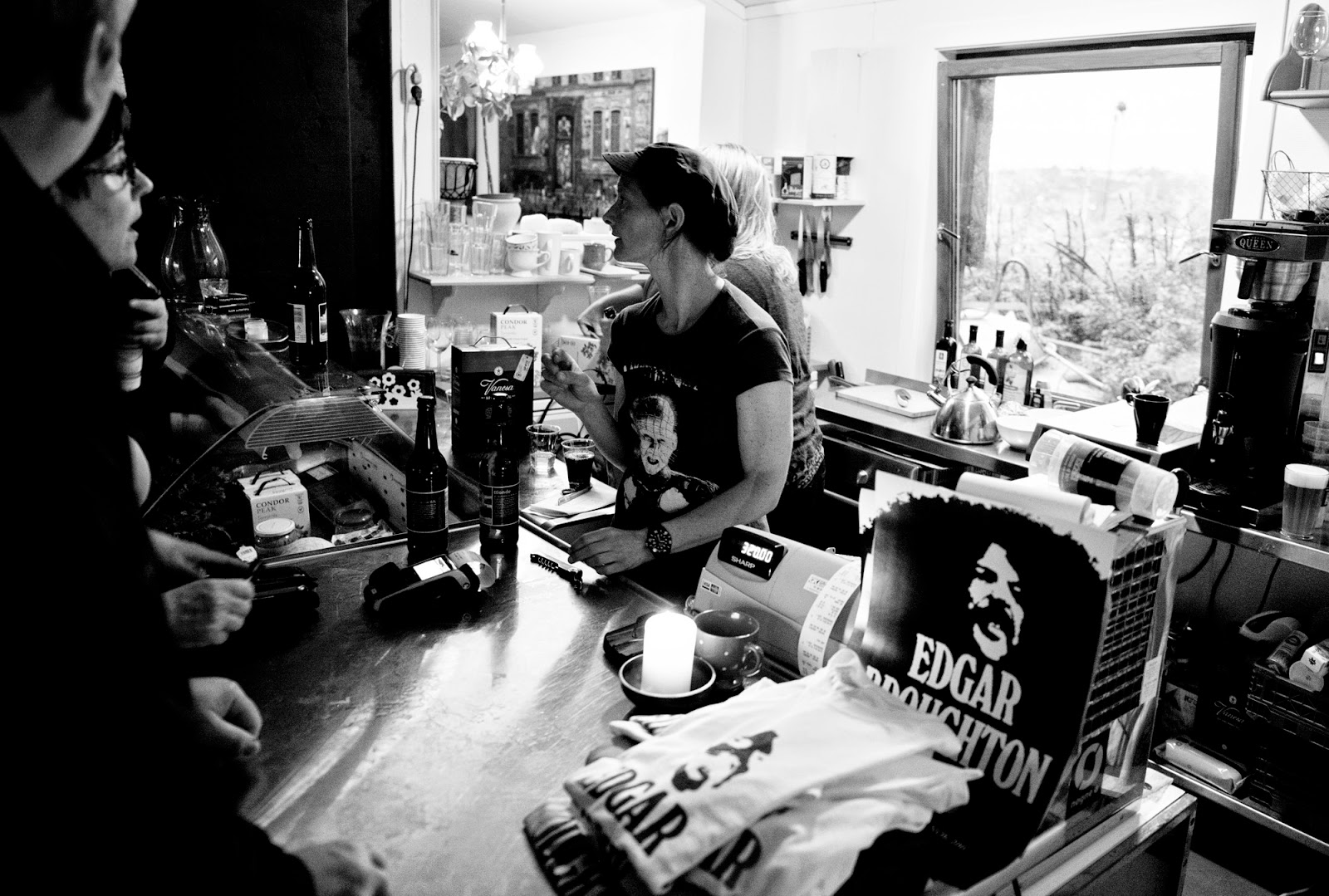 I have to to thank a great number of folk for their generous and warm hospitality during and after the Norway shows. If I miss any one out during this post I apologise for the omission. I have had some IT problems and have lost some data.
Thank you to Karen Valeur in Kristiansand for being a wonderful host. Some one who enjoys the odd late night putting the world to rights into the early hours.
One special evening Karen and I had a yolk session and I decided I must record her wonderful deep vocal expressions, so that is a job for the future. We had a great time and I am certain we shall meet again. 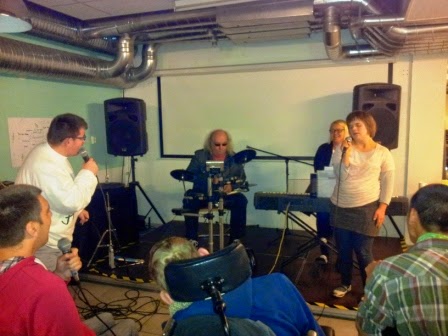 Karen works in a project called HAPPY DAYS in Kristiansand and it is a happy place. The members make a variety of artistic products including jewellery from scrap materials and exquisite hand made cards and as you can see below they have a music group. They make a great noise and I felt right at home. They persuaded me to play drums. I haven't sat at a drum kit for years but I had a ball, even though I dropped a stick a couple of times to every ones amusement.
We ran through a bunch of well known pop songs and an original song written by and for the group with a local musician. This a well resourced project and one which I would like to see more of in the UK. 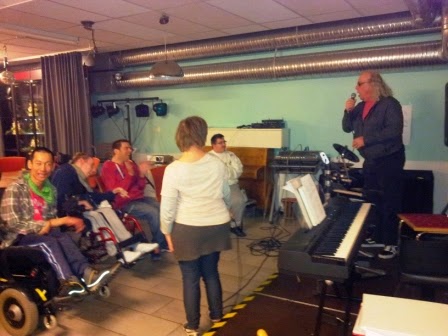 The group knew I am a singer so they asked me to sing a song. Well. I made a feeble excuse about not having my guitar with me but they were not having that. Finally I agreed to sing and improvised a joik. I got quite lost in that and I think folk were pleasantly surprised by the foreigner with northern Norway tendencies ha ha! It was a lovely afternoon with a coffee and cake at the end. I loved the whole experience. I want to go back to play guitar with them and just generally join in. 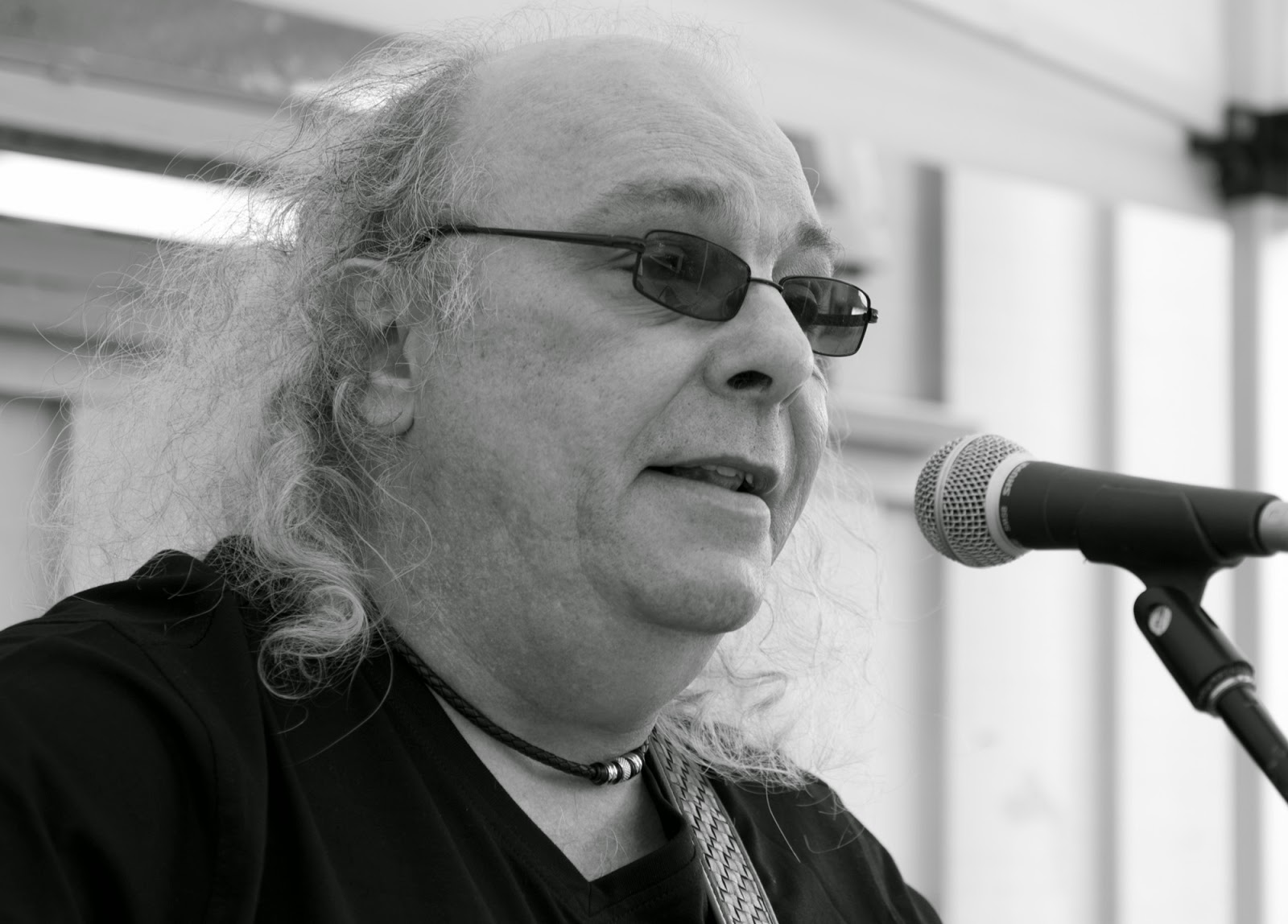 Vaktbua is a little club on the side of a hill on a small rocky island with a road bridge that connects it to the town of Kristiansand. The island is a hot spot for seeing UFO's according to local testimony. I have played Kristiansand on four or five occasions but this was the first with out the EBB.

The sound check was a delight. Kjell Sørgaard who ran the sound system had already sound checked every thing so I just sat and played a few songs while he adjusted things. He had found me a lovely American acoustic guitar amp and had gone to considerable lengths to make it all good. Perfect! A proper professional. 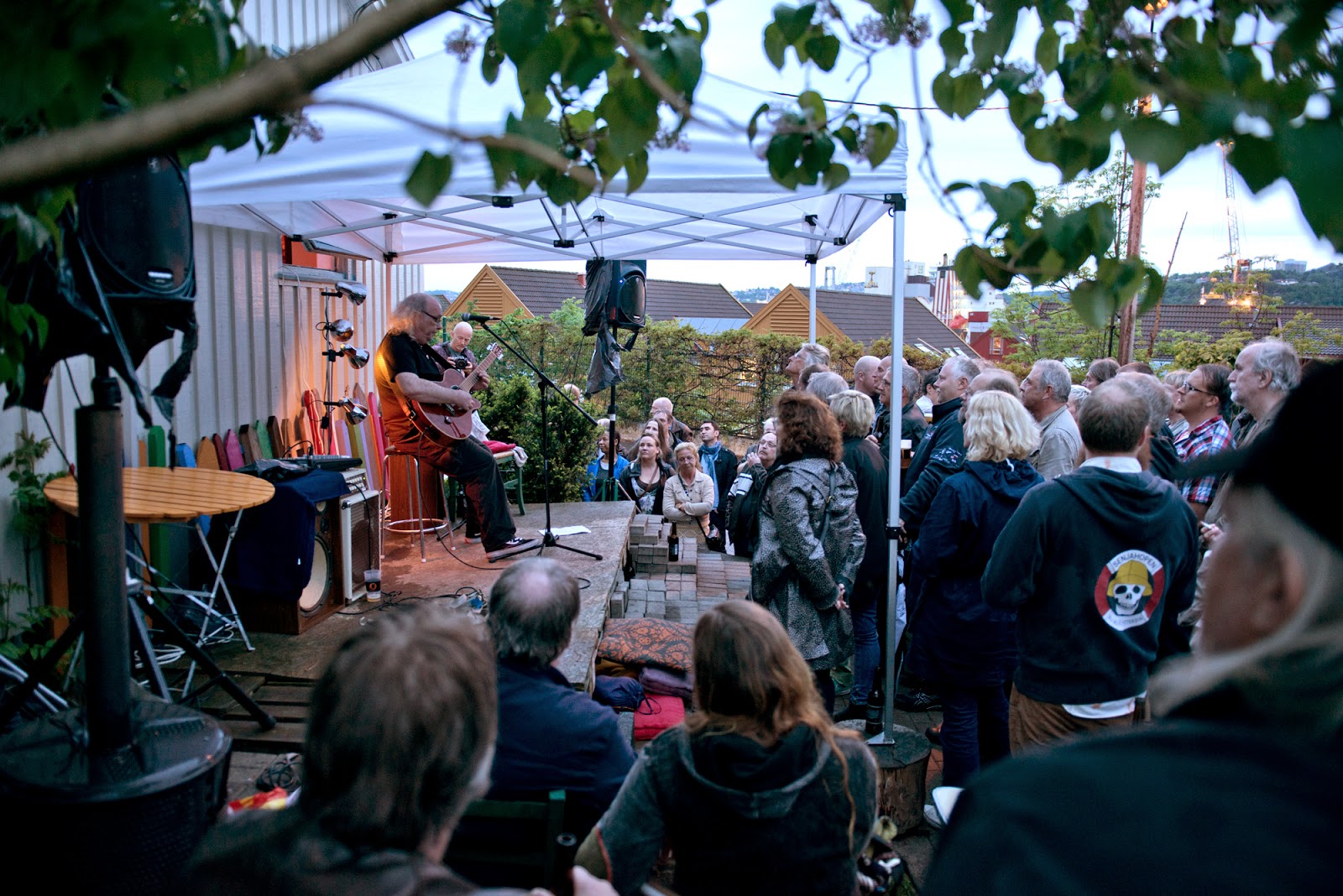 The evening before the gig we had the pleasure of seeing the art works of local artist Alf Solbakken on display at Vaktbua. It was very impressive. Surreal collage made of all sorts of Photo Shop processed images and then many coats of varnish to create layers of great depth.
Alf is also a field recordist as well as a photo / graphic artist and made a great job of recording the gig. The evening of the Art Exhibition opening was a good chance to meet the local community and what a fabulously mixed bunch they were. Elisabeth Labdon who runs Vaktbua, with the help of her husband and son and a crew of proper community minded people, is a little power pack. This a wonderful little venue run with love and skill and I hope it prospers.

On the following evening I thoroughly enjoyed the gig at Vaktbua. The audience endured a down pour before the gig and some rain fell during the performance. Umbrellas came out and we soldiered on. Of course I was dry under an awning though the rain was falling near me by the end. I played every thing I knew and played for about two and half hours. I chatted quite a lot, as I do, and I am still always surprised by two things. First how much of the English language is understood in Norway and how important lyrics are to my Norwegian audience. I couldn't have asked for more from any audience and by the end of the gig I was a very happy minstrel. The kindness of every one was exemplified by two friends of Karen Valeur who just offered to drive to Larvik so I could be delivered to Gry Nielsen who is a Larvik Vinyl Club organiser and host for the next episode. We had a little picnic on the way and the scenery was beautiful in the sunshine. 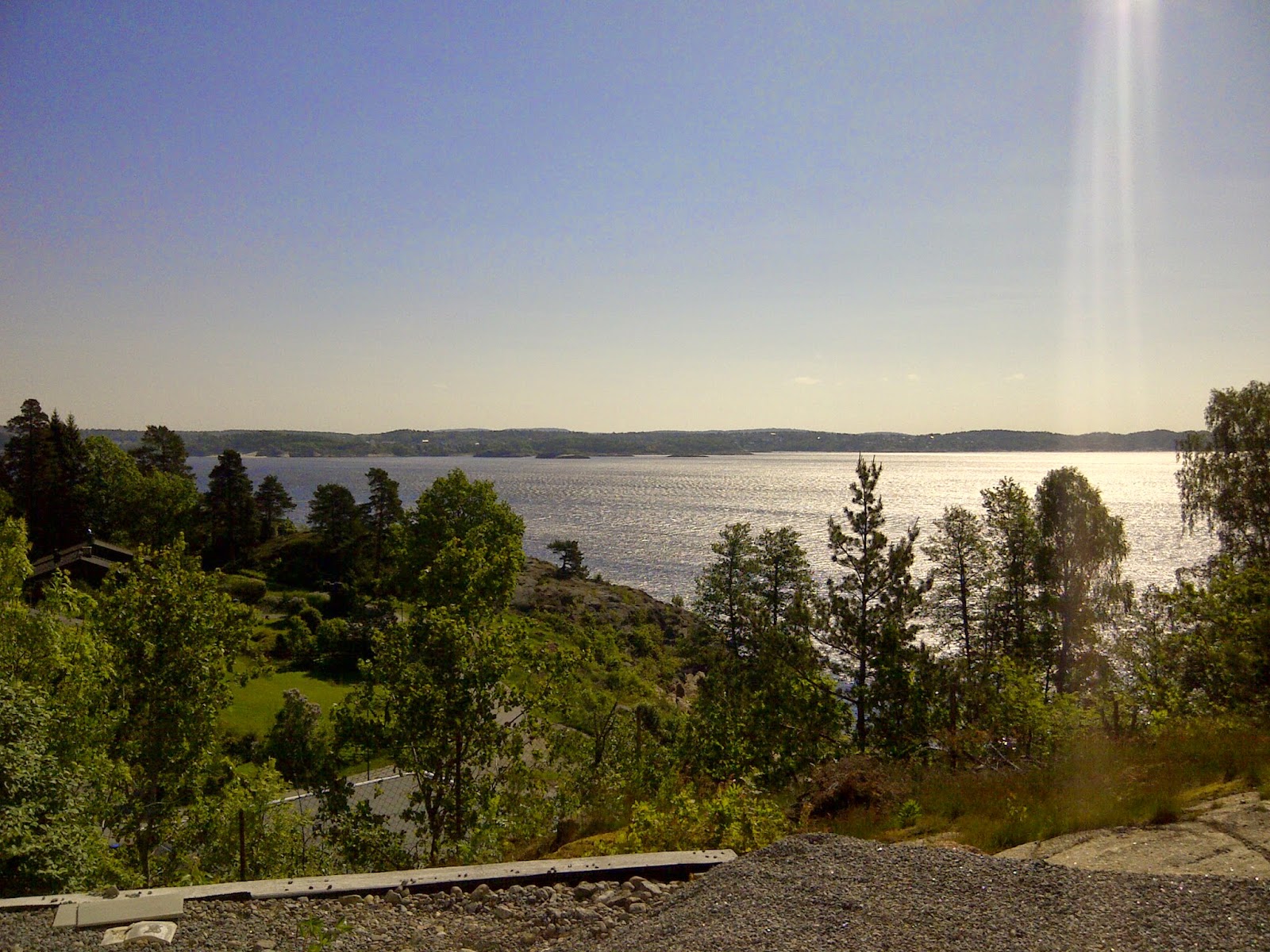 view from gry and thea's house


Above is the view of the fjord that leads out into the sea to the (south) to the right of the photo. Out of the mouth of the fjord the sea separates Norway from Denmark. Gry's house is lovely in surroundings which are quite magical. The first thing you notice about the area, as well as much of Norway, is the space people have and the boats, every where. For a man like me being always by water is a dream come true. I did catch a couple of little fish just below the tree that looks like a large bonsai tree on the slope in the middle of the photo.
As I turned to leave my fishing spot a young deer stood watching me and then disappeared in the trees. Magic! 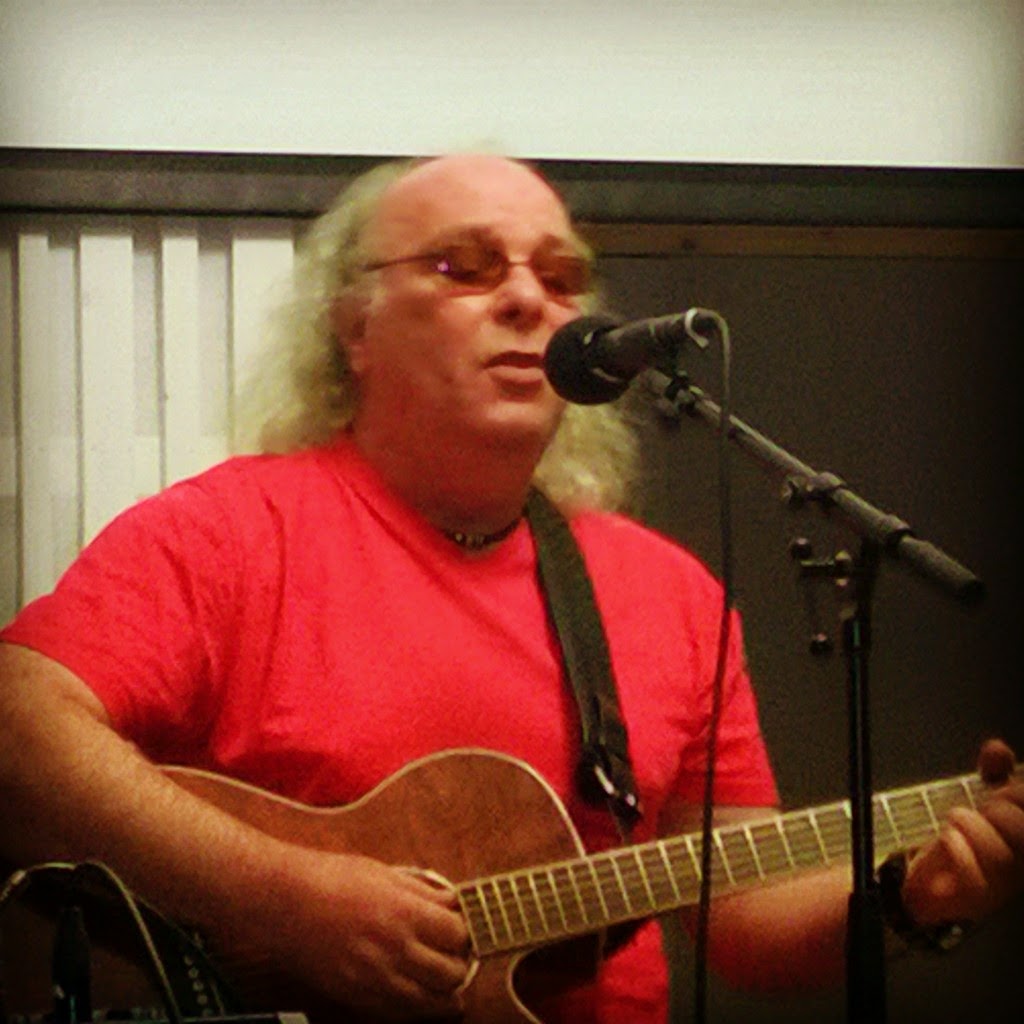 live at the vinyl club larvik

On the day of the gig. I met up with the members of The Larvik Vinyl Club at a barbecue in a garden near the venue. Terje flipped burgers and made us all welcome in the garden. Later he would provide all sorts of goodies after the show when I would be taking a brandy or three.

After chatting with the assembled folk and enjoying the warm hospitality I made my way the with Sven Petter down the track to his venue in the woods.The venue is a large hut in a wood. Inside is a revelation. At the rear are cinema seats. A projector is evident for film shows. Along one wall is a collection of some very nice guitars. At the stage end a PA mixer sits along with monitor speakers and all the technical goodies I could hope for. The owner of the venue Sven is rightly, very proud of his place and had made sure every thing was as I needed it to be. He had even got a vocal setting for me with what I call my "little chapel" reverb.
As in Kristiansand I played a long set and it all went very well. My audience was very receptive as I have come to expect in Norway. Job done! All good! 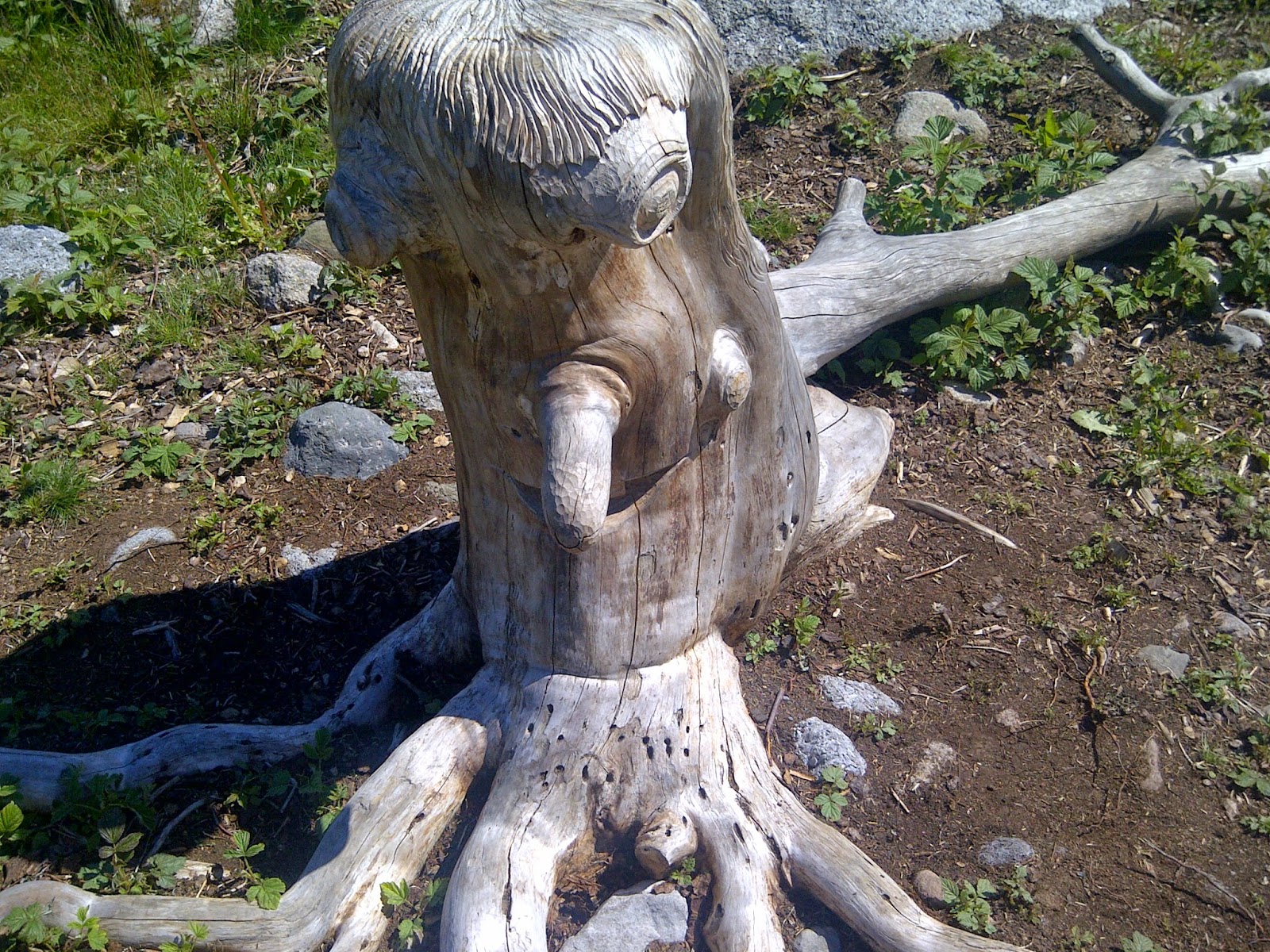 phallic statue on the beach of viking graves

Following the gig a tour was arranged of local Viking sites. Our driver was Hans Gunnar who was not only a very good driver but a very interesting companion as was his friend Ragnar ( The Viking), our guide for the day. Ragnar spent the whole day telling us about the Viking sites we visited and telling great stories about the Viking people who lived in this part of Norway. I have always been fascinated by the Vikings and their history, especially the links to Britain and British history. I could write reams about what Ragnar told us but let the following story suffice......... 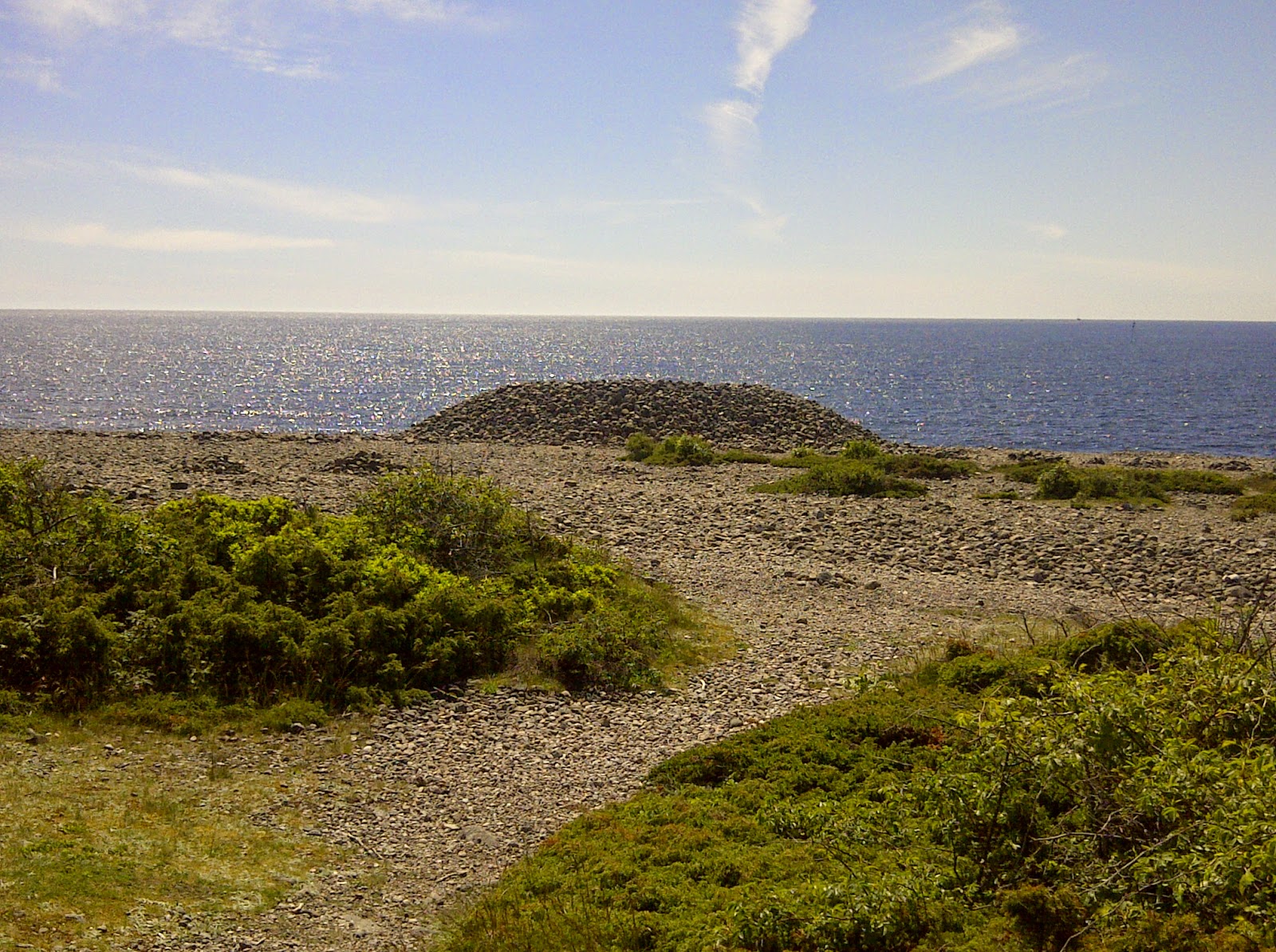 
....... A viking prisoner was about to be beheaded before a King. All was ready. The axe man waited for the order from his King. The prisoner spoke. he asked that when he bent his head forward, some one might sit before him holding his long fair hair so that it would not be soaked with blood. The king motioned for some one to take his hair and hold it away from his bowed head. As the axe fell the prisoner pulled back and the man holding his hair had both his hands cut off by the axeman. The king laughed and freed the prisoner saying that it was the funniest thing he had seen for ages. Humour has changed a little bit then! 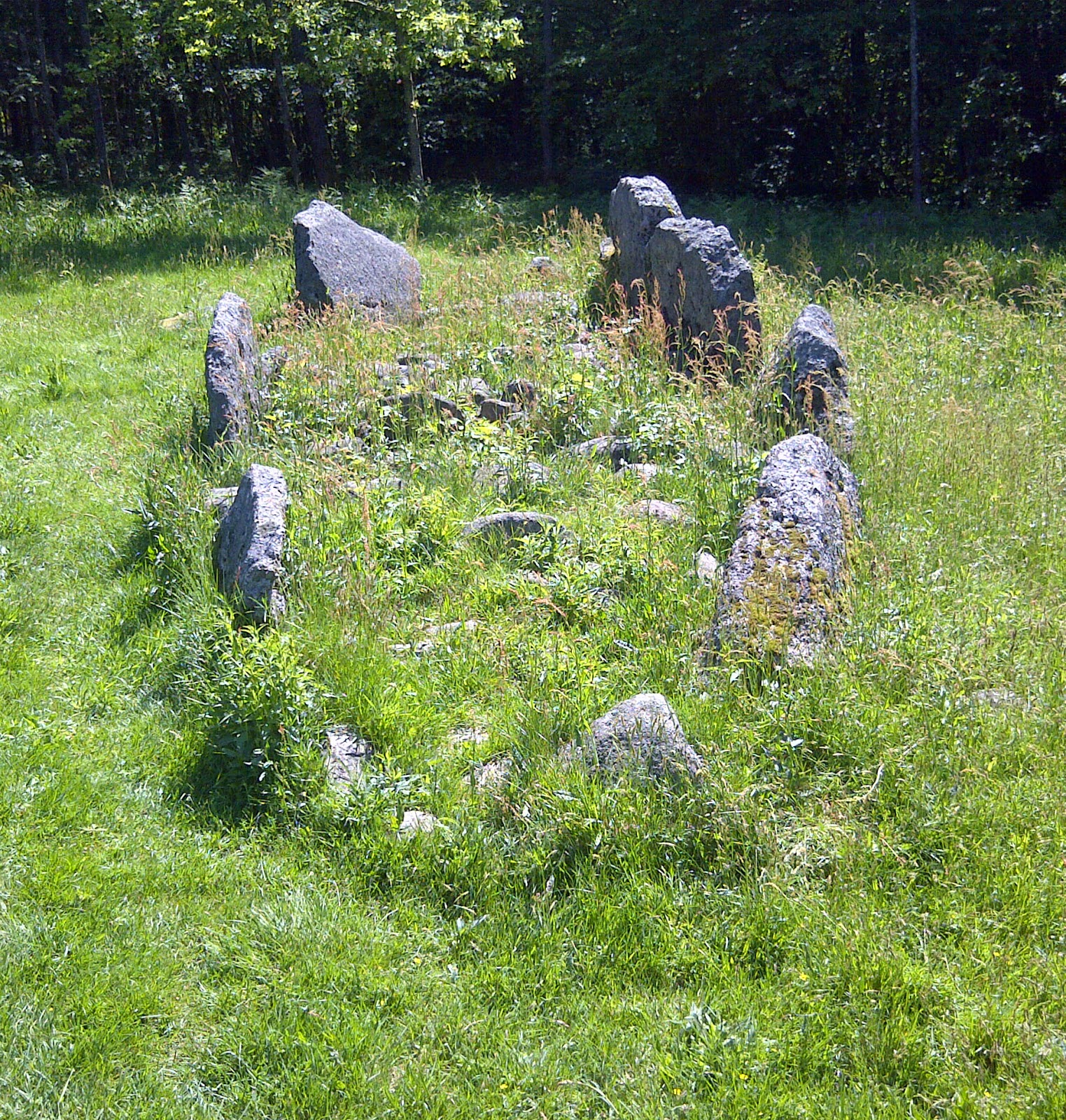 
In a viking grave near here a man was found holding his own head in his hands.
During the day Ragnar showed us a standing stone in a field near a main road. It was said than when a certain king died the four regions of Norway wanted him buried in their territory so they cut him into four parts and one part is buried under the standing stone according to legend. 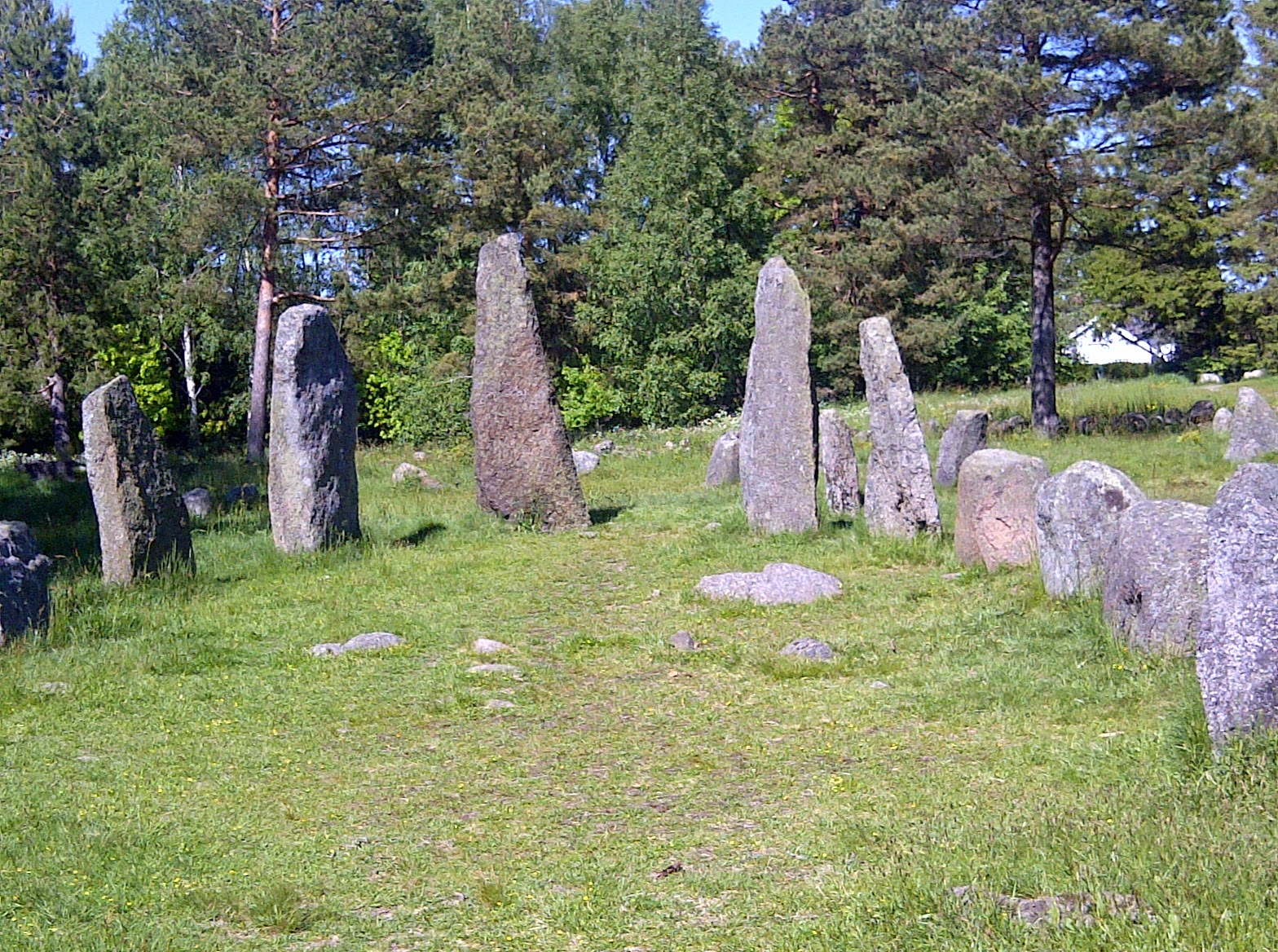 The lake below is a special venue for me. Ragnar and Egil took me here, in the mountains to fish. Egil has a wonderful traditional cabin in the woods. It is decorated in the old Norwegian style with lots of painted wood articles in a style that reminds me of the painted art objects on UK canal barges. We drank some ice cold water from Egil's well and walked a while down to the lakeside. Egil has a rowing boat and that was to be our transport on the lake. We tackled up and Egil very kindly attached a small Yo Zuri lure to my trace and we piled into the boat. As we pushed off and Egil rowed away from the shore line I cast the little silver lure behind the boat. I let it sink for a while and then gave it a little twitch. My road bent over and I had a fish on the end of my line. Soon the fish appeared on the surface of the icy clear water and I had caught my first wild brown trout. Thank you Ragnar for the loan of the little trout rod.
We let the boat lie against the opposite shore and we all fished there for some time. Egil caught two more trout and then after a beer we headed back to the mooring. I was so chuffed with my trout and was looking forward to dinner when I would eat it. It was a special boys day out. Three men in a boat. More perfection for yours truly and a day I will always remember. I have an invite to go back to stay in Egil's cabin so I think it is very likely I will, at some time. 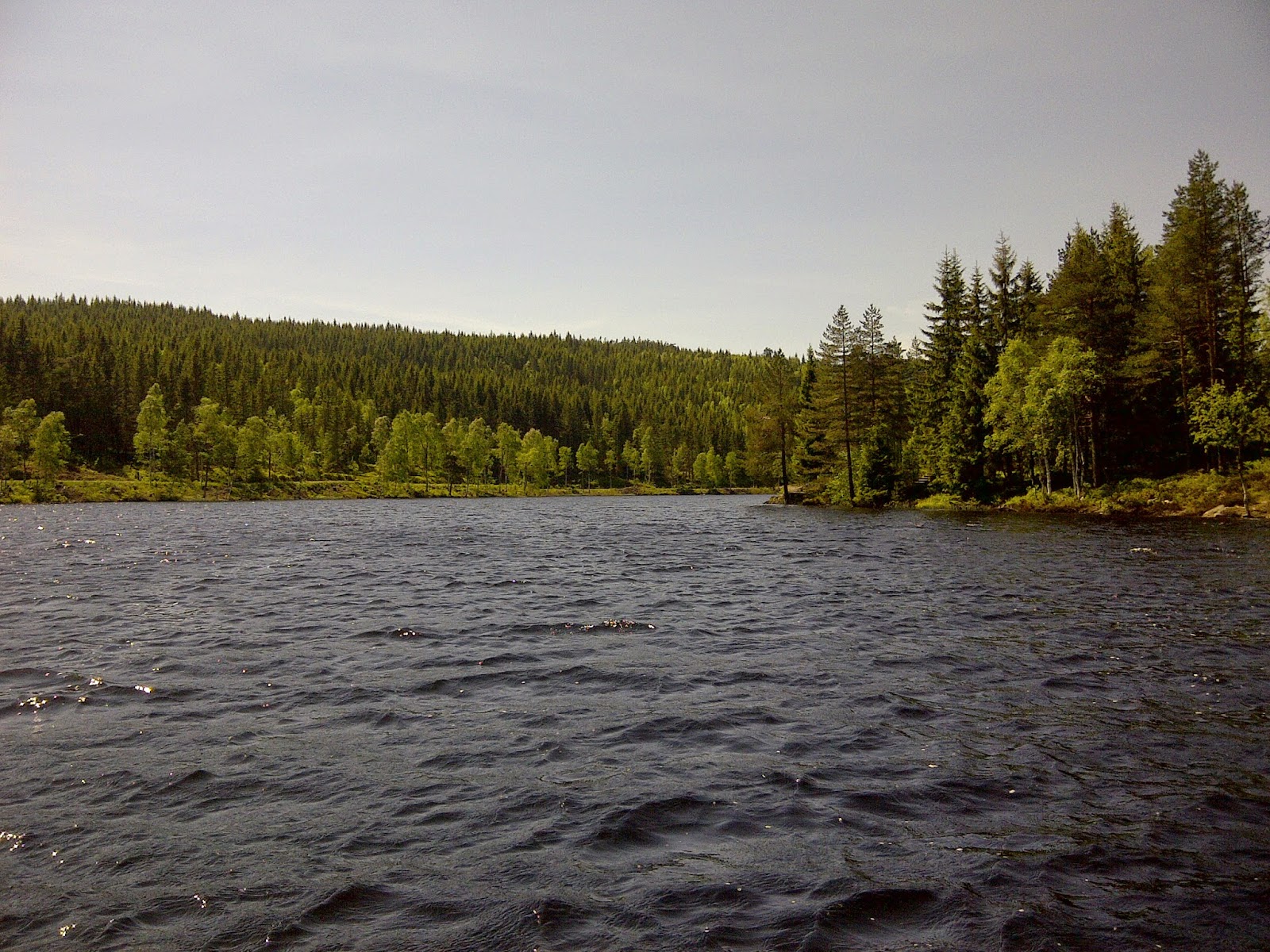 That evening a bunch of us dined with Ragnar and Wenche in their garden. What a splendid evening with good food and wonderful company. Ragnar cooked my trout for me and I ate that along with some of the best sea food imaginable.
It was late when we left to head back to Gry's home by the fjord.
I cannot thank people enough for their kindness and support and for their hospitality during the days spent in Larvik after the show. Gry and Thea ( Gry's lovely daughter) were the perfect hosts and I have never felt more welcome than at this time in Norway. Thanks to Kjeld Willy, Manon and to Per and all for their input and kindness. I will come back to see your studio Kjeld.
Norway is a beautiful largely unspoiled country and it's people are special. I have always felt a connection with them and this trip has increased my love of the place and the people I meet there.
As the plane lifted off I knew I would miss the good people of Kristiansand and Larvik for some days to come but I knew that a return trip would be inevitable. As I write this an email comes from Alta in the north of Norway to invite me to play there in July.
Life is good.