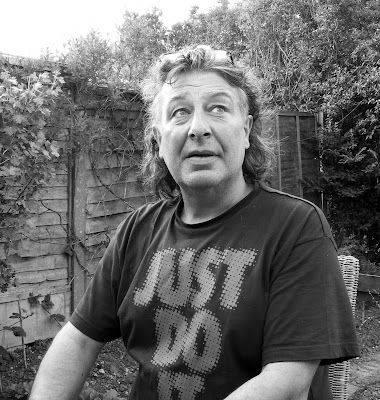 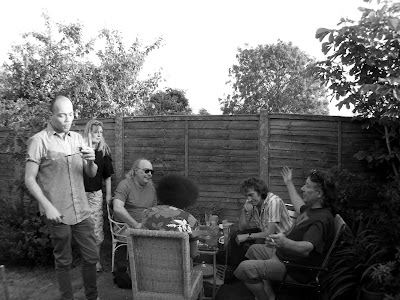 Well, the weather is picking up a little. Summer keeps trying to bring a little sunshine in our lives and I guess we really need it this year. Sunshine always helps.
Steve picked a great day for his birthday bash last Sunday, the hottest day this year so far. There was a nice mix of people, a usual, including a very nice bunch of kids and one or two faces not seen for a while. There were a few missing faces but they are not forgotten. It was a very civilised affair and there was a genuine warmth among those gathered. Most of us have been around a long time and have known each other through many stages of our lives. I met up with an old friend and co-conspirator on early recording including Oora. Alan O’Duffy has been a freelance recording and mixing engineer for 30 years working in the music industry and in TV and film industries. It was very nice to meet up again and share experiences and stories. I think that when we really connect with people the passing years do not erode the connection and we are able to pick up where we left things. 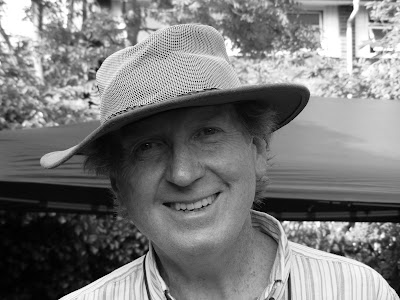 At the weekend we will spending a day working on our show for the Friars 40th anniversary gig at the Maxwell Hall Aylesbury on Monday the 1st of June. We are scheduled on stage at around 8.30. It will be another opportunity to meet up with old mates The Pretty Things and Tony McPhee and The Groundhogs. I am looking forward to it very much.
Further down the road will be our return to Leamington Spa on the 7th of August. We will be performing an extended set covering all our albums with one or two surprises and again, looking forward to meeting old friends and family. We will be playing the Woodstock Remembered Festival on the 8th.
I hope that one day we’ll be playing at the Labour Remembered Festival long after we have got rid of the taste of New labour. Mean while I am looking forward to rehearsing with the guys on Saturday. It promises to be another “sunny day”. 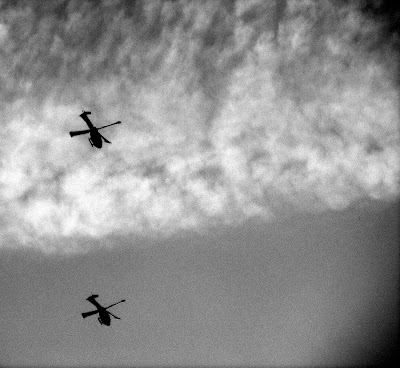 High over this city two USA helicopters fly the course of the river Thames. Rumour has it that they are flying regular sorties into the City of London ( The banking Sector ) as part of anti terrorist initiatives put in place shortly after the attack on The Twin Towers, New York.
Below is a snapshot of life below in beautiful Battersea Park. The sound of leather on willow is temporarily drowned by the throbbing whine of the choppers.
The contrast between the activity overhead and down here among the people in their park was striking. 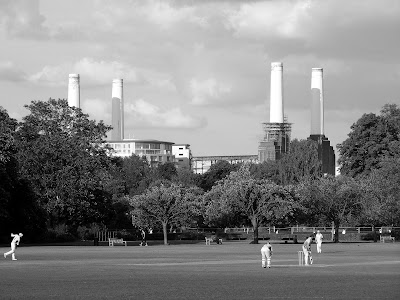 Mean while the controversy over the MPs expenses fraud rages on. I never thought I would ever have any thing much in common with Norman Tebbit but his call to boycott the coming European Elections struck a chord with me. He was criticised by his party which is no surprise but he has a point and now is our time to make it. I have no intention of voting for anyone under these circumstances unless I can help to spoil their party. This is an apalling condition for me to find myself in. I have always participated and encouraged others to vote. Your comments on this dilemma would be very interesting.
Some MPs have had the decency to walk away but I fear the remaining rot is deep in the fabric of Westminster and therefore the system is disfunctional. For most of my life assertions by my myself and my comrades that we deserve better , that the heart of our governing system is tainted, that the people who run things live outside of our reality and have lower standards than most of us was always dismissed as oversimplification. Ha ha!
Most of the people I have known and have worked with have much higher standards than these parasites and would not need The Speaker of the House or any one else to tell them they were on the take.
Our representatives need a job spec, a job description, and independent scrutiny in all areas, like it is in most work environments. They should be inspected along Ofsted lines to ensure they meet targets and standards with no opportunity to change the goal post when they don't get to tick the required boxes.
No organisation operates along the lines that Westminster does and it is time they were brought into the modern era. We need reform of our political system. Word is clearly out. The current crop is not fit for purpose and should walk away. If they don’t we should send them on their way.
After a successful purge in Westminster I suggest a War on the Greater Greed and a radically different foreign policy not based soley on what is in it for us. Who knows we might see a favourable response re-gaining respect from the rest of our world along the lines Pres Obama is seeking for the USA.

Any one for cricket? 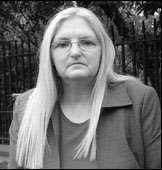 Hi folks. I realise it’s been some time since I wrote any thing here. I could blame the pressures of modern life, relative fame and the demands of my adoring public ha ha ! ……but that wouldn’t be it really. Truth is I have been pre occupied with rehearsing and organising life so that there is more peace than angst. We have recently returned from Norway where we experienced more than our share of trials and tribulations. I do have the satisfaction of being able to say that none of our problems were as a result of the EB Bands failings. In fact we were the only organised part of it except for the last show which was superb. I don’t very often say so but the band is totally on it right now. Special thanks to Jan-Åge Johansen and all of the folk at Kabelvåg who made the last gig so memorable.
Some thing changing happens when we go above the Arctic circle and we become energised. The air is wonderful and the scenery breathtaking. Jan Johansen has invited me to go fishing with him on our next visit. Hey! I just wanna hole up there for a few years and be still and quiet. Well, maybe not quiet ha ha!
Mean while the EB B is appearing at the Friars 40th Anniversary gig on the 1st of June, The Assembly, Leamington Spa on the 7th of August and Woodstock Remembered festival on the 8th. Check out the gigs section on the site for details, as we get them.

Some years ago my partner was working in Lambeth for their Youth Service in the pioneering Lambeth Young Womens Project. Jack Straw was visiting in some official capacity. They had a discussion about lack of services. Jack immediately stated “ people should pay their poll tax”. She replied that she lived in Wandsworth and at that time there was a small charge there that she paid. Jack slunk off. It has come to light that he massively underpaid his community charge in recent times. Of course he has paid it back now. So that’s o.k. then Jack. The long list of sleazy expenses is growing every day.

Some years ago, while managing the technical operation on the wandsworth youth radio station Fundamental FM, I witnessed an interview between teenagers and Home Office Minister Paul Boateng. When asked by a youngster why young people drifted into crime he aggressively asserted “ young people don’t drift into crime , they make a choice to do so”. I was shocked at his arrogant lack of sensitivity and that a few smart young ‘uns could so easily get him on his back foot. He didn’t like the fact they suggested politicians alienated young people and lost votes. Three years ago the government paper Every Child Matters stated that steps must be taken to prevent young people “drifting into crime”. It seems that these people move the goal posts when it suits and as if it won’t be noticed.

Recently New Labour has shown us the truly dark and deceitful nature of UK politics. And worse they are totally out of touch with reality. Their lack of intervention in the case of whistle blower Margaret Haywood, the nurse who filmed the neglect of elderly patients for a BBC Panorama documentary is disappointing, given their insistence that Local Authorities and public service providers construct their own whistle blower policies. The government is obsessed with meaningless targets and driven by box ticking but they only like the outcomes that will bolster their Kafka-esque policies.
The treatment of Margaret Haywood is outrageous. She had gone through all the usual procedures to try to effect the change needed to ensure the issues around patient care were addressed but with out success. There are plenty of ways to protest at Margaret’s treatment so please participate.
Online'>http://www.gopetition.com/petitions/support-for-whistleblowing-nurse.html">Online
On BBC’s Question time last night we had the uneasy experience of a top tory berating the Government for totalitarian policies and undermining civil liberties. It was only relatively recently that the UK signed up to the European Commission on Human Rights and again the Government has been told they have overstepped the mark on a civil liberties issue. This is about the governments decision to keep the DNA samples of people charged with a crime but found not guilty ( innocent ), for twelve years. The commision has agreed that Scotland’s policy of three years is appropriate. The insuation that New Labour is repressive and Draconian seems wholly justifiable. The tip of the iceburg I am afraid. Very disturbing indeed! I am certain that if this government is allowed to continue along their current path unchecked, then we shall all be very sorry we did nothing. It is clear that they will not easily allow meaningful / successful protest and that unidentifiable police officers in the Met, here in London will increasingly continue to act against the people because this is the culture of present day government. Still the worm will turn and it might not be too far off.

Brown promised a u turn in the affair of the Gurhkas but yesterday it was clear he must have forgotten to inform the relovent parties responsible for determining wether the old soldiers could reside here. What a buffoon!
Well I have got a few things off my chest. Do I feel better? No, I do not. This country is in serious decline and when I am fortunate to be else where as I was last weekend I feel shame and dismay at the state of these sorry isles.

So is that it? All doom and gloom? No of course not! There is always another side to the coin and yesterday I heard a lovely story about some ones efforts to unite an old lady with her son who she has not been able to visit for a long time. The mother is not well and coming to the end of her life. In her own words, to see her son is her last mission. I can not tell the details but the effort and resourcefulness required to make this happen is way beyond the call and mandate of the professionals involved. Still, they will achieve this if at all possible. There is hope within a good heart. Meaningful success will come from still trying when others give up among the shambles. I love them for their good hearts and wish them the best things in their lives.
So now I have to make some thing happen, to contribute a little some thing and play my part. So it goes. The good inspire and give strength. We need you all. Act now!