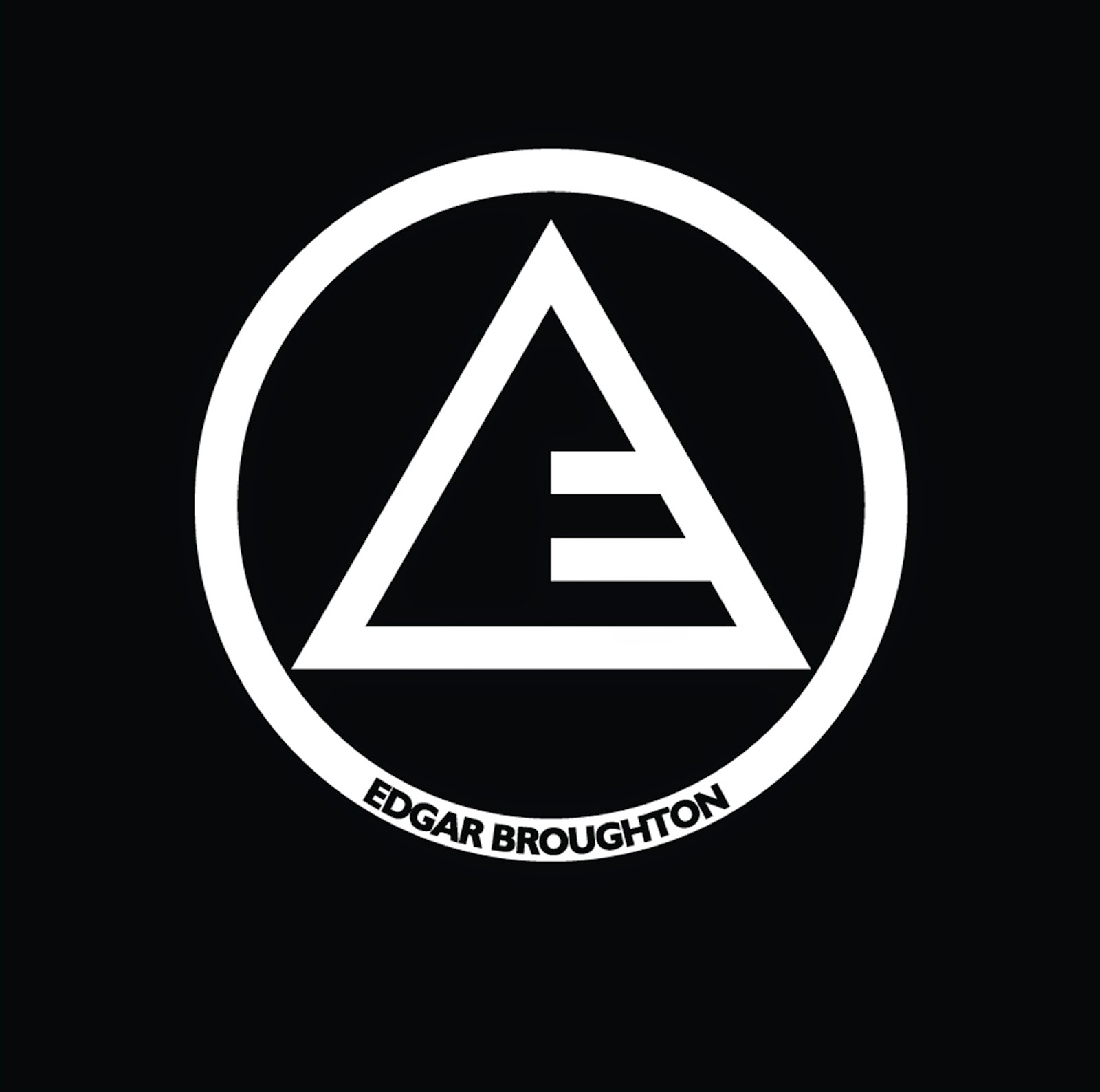 musicians in partnership with communities

A crack in the leaden sky is followed by the rumble of distant thunder. The icy rain begins to fall in sheets. The sky is falling on the street people in drenching waves and the pale sunshine offers cold comfort. Never dry, never warm and always hungry but here under the railway arches the rain cannot penetrate.
See me. I was just like you. I thought it would be alright. I thought some thing would turn up. I tried my hardest to make it happen.
I want you to know that my situation is not of my own making nor a choice. I made mistakes but the price is very high. Why me? Why any one? No one should be adrift among the Christmas spending, lending and debt or going through a bin on a lovely summer day while the tourists of the world stream by on their holidays. I want to be warm. I want to be clean. I want to be safe.
Honestly? I just  want to be wrapped up in a great blanket, go to sleep and wake up in a clean bed with a roof over me. Twenty eight years old and I hear myself whisper, so no one can hear, I want my mom.
I know the money lender's man is after me. This time I know failure to make payments will result in a broken finger or worse and still I will owe more than I have borrowed. If only I could get a helping hand towards a small change, towards a fresh start. If only. 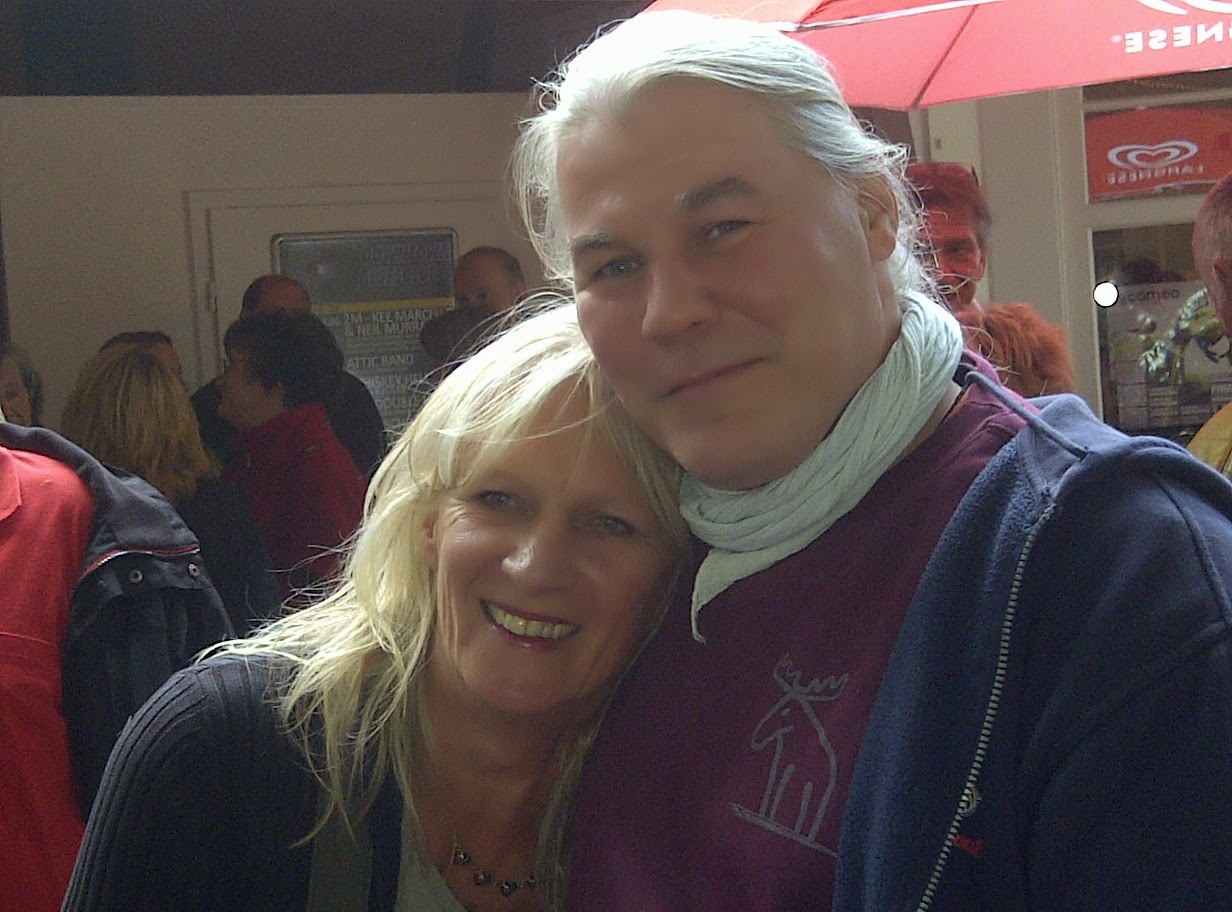 Uwe Ferrier contacted me some time ago about playing for his partner Gabi's 60th birthday, It has been a while since I had been in Germany and this was to be the first FDPFAFDW gig in the country. Strangely the venue turned out to be a section of the park that houses the venue where the EBB last played Hamburg.

I arrived at Hamburg airport where I was met by Uwe and his friend. Soon we were in Hamburg and I was checking into a very nice hotel. Soon after that we were outside a house where Gabi was enjoying an evening with friends, She had thought Uwe was some where watching the German team play in The World Cup. She had no idea what extraordinary lengths the man had gone to keep this a secret.

We parked up and entered the house. I was welcomed and then we played the game - " You know who I am. You have seen me before". Poor Gabi stared and stared. She actually said you look familiar but she really didn't get it. Wonderful! She had been at the EBB gig in the park with Uwe. Eventually I told her who I was and I thought she was going to fall over. I think it took a while to sink in and then we all laughed as the story of Uwe's secret plan was told. I think she was very impressed with Uwe's birthday gift of your's truly. We chatted some more, I had a beer and then I got a ride back to hotel where I crashed out very early for me.

Next day Uwe picked me up from the hotel and took me on a tour of the city. I have been to Hamburg many times but I realised I hardly knew any thing much about it apart from some historical knowledge of it's part in World War 2. It is amazing how little you see on the road in a touring band which makes my FDPFAFDW experience such a contrast.

Uwe showed me the raised dykes where previously the dykes had allowed water from the river Elbe to flood whole districts causing the deaths of many workers. The area seemed a poor area and mostly inhabited by refugees. 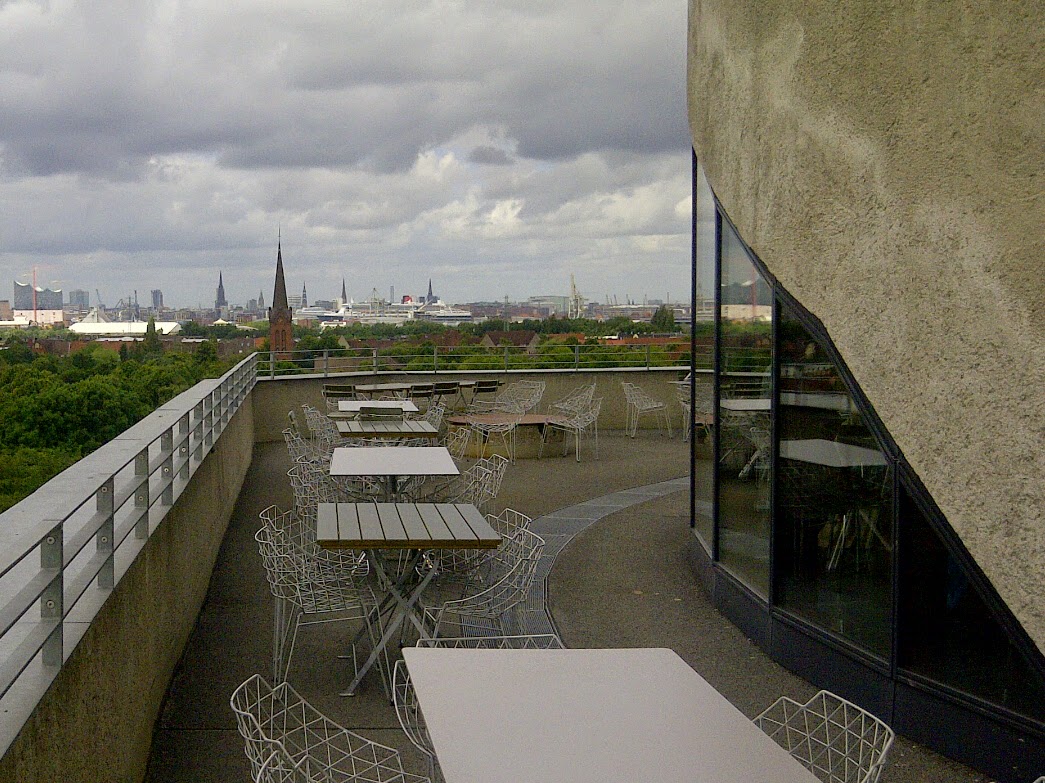 view from the energy bunker

Uwe took me to a place called The Energy Bunker which is a massive concrete construction about 40 metres tall with walls 20 feet thick. It was built during the war and could shelter hundreds of Hamburg resident during RAF bombing. Well that is not the whole story. In fact the roof of the bunker housed huge guns which were never meant to be fired at British air craft. Hitler was very worried by the Democratic north of Germany, especially in the area of Hamburg. The main purpose of the massive fire power installed on the bunker was to fire on the people of Hamburg if they had opposed Hitler. Terrifying but totally in character for the dysfunctional Austrian. Now the bunker houses a massive array of gigantic solar energy panels. A cafe sits on the top where they serve the best coffee ever and typically gorgeous German cakes. 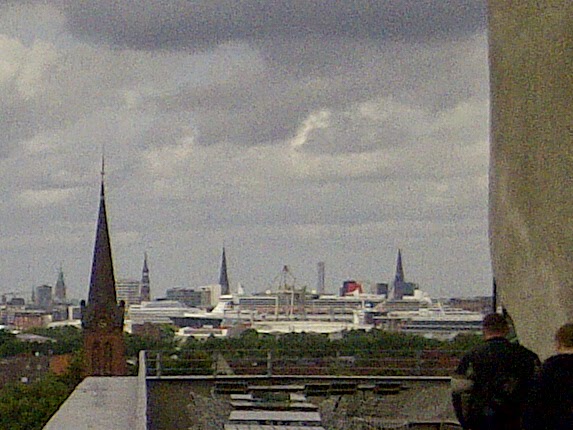 From the Energy bunker you see how ravaged Hamburg was by the the RAF bombs that fell on it. Just like Coventry the gaps are filled by post war, some times, hurriedly constructed buildings to fill the land scape. Dresden, in the east is the most impactful example of this that I have ever seen.
There is a part of Hamburg that was clearly untouched by the carnage. It is an older more grand district with slightly imperial looking architecture. This district was passed over by the RAF but never bombed. It was to be the military headquarters district when the Allies would eventually occupy Hamburg. 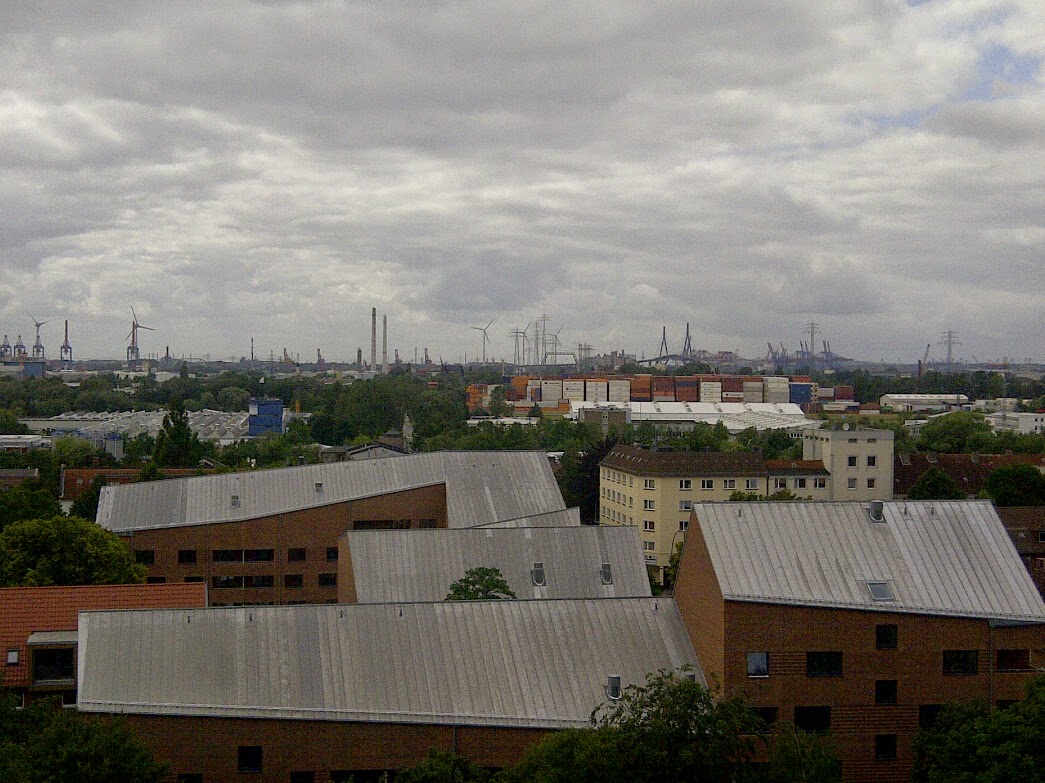 towards the river elbe viewed from the energy bunker

Later we drove to the park where the party was to take place. It looked like raining but held it off mostly. The section of the beer garden reserved for our use was covered and also surrounded by trees which overhung unsheltered parts perfectly. Nearby the huge seated area with the big screens was preparing for another night of world cup soccer. I quickly sound checked with the equipment provided. It only took a few minutes and it was job done. Next I had some very fine German barbecue and various delicious salads and fruit. 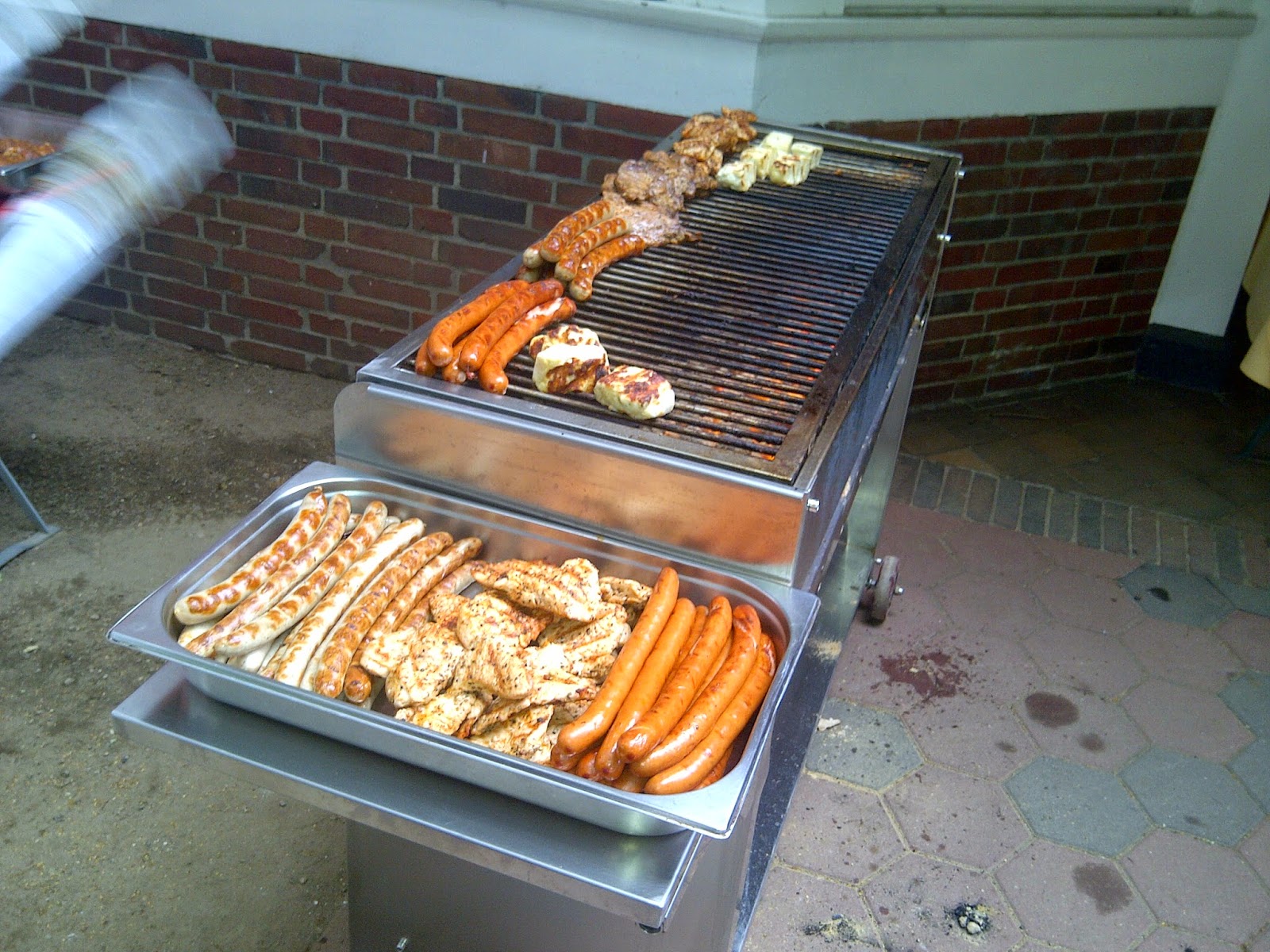 I played around half eight. I was surprised at the warmth of the invited audience. I knew some of them had never heard of me though most seemed familiar with what I do. I should probably have taken a break but things were going nicely so I kept going. After a while people began chatting as folk do when they haven't seen each other for a while or when they are reporting the latest gossip to a friend. I have to admit it used annoy me a great deal but I have learned to curb my annoyance and enjoy the moment. After all it's never my party and I am hired to play and sing for my host. I noticed some of the new songs were well received which was very satisfying. 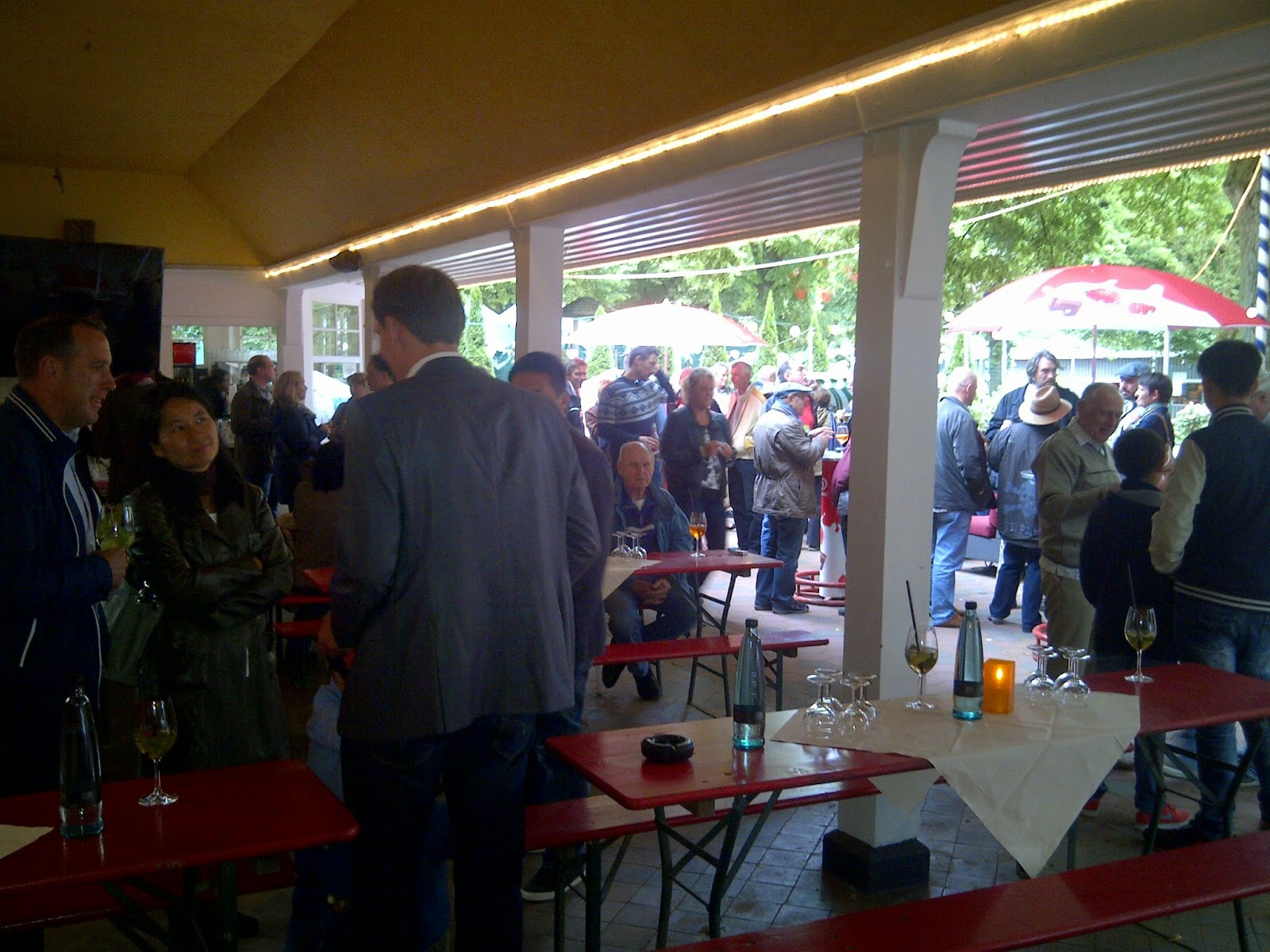 people beginning to arrive at Gabi's party in the park

I think every one had a good time. The diverse mix of guests was fascinating and the after gig chats were very interesting. I met some lovely people, as always, at one of these gigs. The hardcore party people were still going strong when I left to head back to my hotel.

Next morning Uwe collected me for breakfast at his place with Gabi and friends. After breakfast I played Evening Over Rooftops and a new song On The News for Gabi. I had omitted to play Evening Over Rooftops  at the party. I don't know why I didn't play it. Strange things happen in my head during a performance and occasionally I miss some thing out. Any way I felt I had redeemed myself a bit and most importantly, Gabi was pleased.
Looking out over the rooftops from Uwe's balcony, Uwe told me how from this vantage point, there was a time when he could see American Drone prototypes being flown over the city towards a nearby US base. I suppose the Americans have developed them a great deal since then even though drones still kill innocent civilians.

Uwe had wanted to show me some thing of the area he lives in and I chose to visit to Neuengamme, a World war 2 concentration camp way out on the very edge of Hamburg. It was grim in the pale sunshine. We were too late to see all of the place as they were closing but I saw enough to fill my head with unimaginable horrors. I tend to think I know about this stuff after all these years but the unknown stuff is, of course, in the detail. For example at one stage of the terrible history of the camp 80% of the prisoners were German. The prisoners were making prefabricated concrete blocks for the re building of Hamburg. More than 80,000 prisoners died here. They were either intentionally worked to death or shot for target practice at an onsite target range 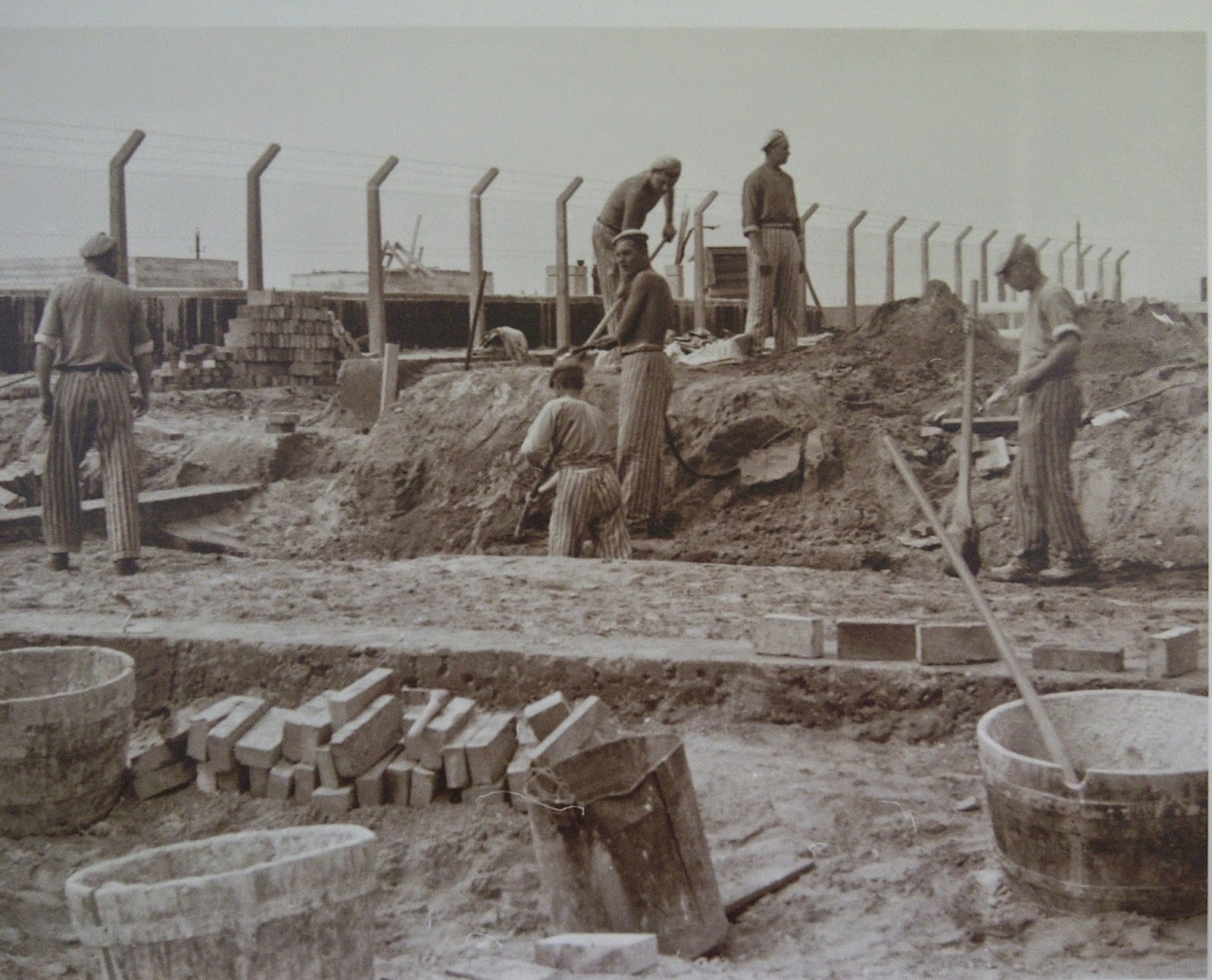 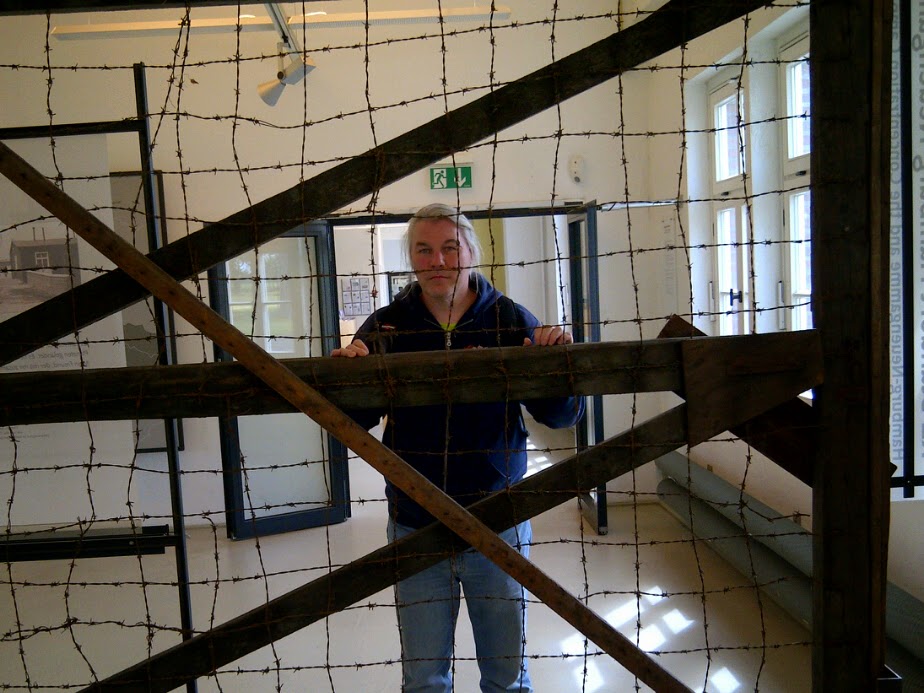 Uwe behind the wire of the main gate to neuengamme camp


I learned a lot in the sad place where birds don't sing but it was a worthwhile visit. I know people say we should forget but I do not agree. We must remember the lessons so that, at an early stage, we can resist those who would wish to take us back there or some where esle just as dreadful. We must also remember the Germans who resisted and who took the most unbelievable risks to save lives. There were many more of them than one might think.

The next photo is of a pool in the middle of what is now a residential area in Central Hamburg and within a small park where kids play and dogs are walked. It is likely that many locals do not know this is where the German battleship The Bismark and  the infamous U-boats were developed in conjunction with the nearby Hamburg ship building docks. So eventually it was time to go to the airport for my return flight. Uwe and Gabi had been wonderful hosts and I enjoyed every minute of their kind hospitality. Special thanks to Uwe for showing me around. I wish all good things to my new friends and every one who made it all so easy and pleasurable for me.