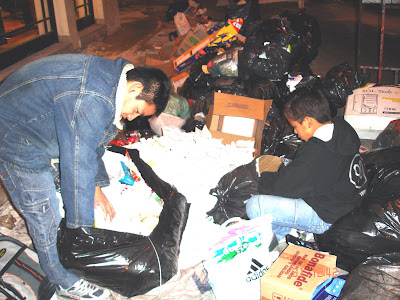 My old dad often used to say “ Write some thing happy, a pop song. Never mind all this doom and gloom” yet he listened enrapt to Leonard Cohen. I guess I never did write the archetypal pop song but then again I am not saddled with having to sing In the Summer Time for my supper. My dad was the guy who suggested we call ourselves The New Brooms. This was the man who, not unexpectedly given his experiences, would some times espouse extreme Victorian values either to howls of derision or stoney silence. On matters of mental health and a psychologist’s prediction that one in five university students would experience some kind of mental illness, he once exclaimed “ Break downs! In my day you just had to pull your socks up and get on with it”. This was the non-conformist who walked with a sandwich board outside Warwick public school after Steve was expelled for having a non-regulation hair cut. Dad just got up and went out to do what could be done and I have always respected him so much for that. Back then we all sat an exam at the age of eleven or there abouts and Steve had achieved a high pass score which gained him a public scholarship to Warwick school which was paid for by the county. For the record the problem was just that Steve’s hair could not be parted and even when ordered back to the barbers, to have a “short back and sides”, it still had a “Beatle cut” shape in the front. The barber wrote a letter for our parents that stated Steve’s hair could not be parted according to headmaster Martin’s orders. Martin rather bravely told my mom, “ He would expel a boy for having ginger hair if he wished”. At that moment he was probably lucky to keep his head on.
I think this might well have had a far more significant impact on things than any of us could have known at the time, especially for Steve. Martin’s words have rung in my head as a symbol of prejudice and oppression ever since. All this was at a time when Williamson the head teacher at Leamington College which was the grammar school I attended, could and did cane you with complete impunity, until your buttocks were bruised and laced with livid weals. I knew the painful indignity of that all too well. The injustice of it all still rankles and these events are among those that still inspire me to protest and to continue to claim the right to do so.

Times have changed but there are still many offences and much exploitation perpetrated by grown ups on children and young adults. Given the most recent cases of abuse on children one might ask how dare anyone seek to improve any thing before we address the needs and rights of all of the children? Recently Noel Gallagher said a Unicef report ranking the UK bottom on child wellbeing across 21 industrialised countries "kind of makes me angry".
He added: "When the Labour Party got in it was all about children and education and yet 10 years down the line there's people saying that kids are better off in Poland. That's not right."

The EBB supports the NSPCC.

Posted by edgar broughton at 15:04

Havn't been to a barber in 44 years

Mmm! How interesting that you haven't been to a barber for 44 years! Goodness me what ever next ?

Rob, Your comments about cruelty to children in this blog was bang on the mark with todays totally abhorrent and sorry tale of four people in devon goading two toddlers to hit one another, and then recording it on video, it does make you wonder what the f**k is going on in this country? It seems that the whole moral structure of our society is collapsing, I am not a violent person, but stories like the one mentioned make me extremely angry, I could really lose it with those people, I mean what chance do those poor kids have, they could be mentally scarred for a very long time, and what will happen to the perpetrators? bloody slap on the wrist Grrrrrr.

On a lighter note, at my school, we were threatened with expulsion for having long hair, we all walked out of morning assembly and went on strike, after two days of that we had a meeting with the headmaster and he agreed that we could keep our long hair if we formed a hair commitee to judge if it was an acceptable length and not too untidy, a victory for pupil power and common sense there then.

I never quite worked out why long hair somehow interferred with your education - it seemed to work ok for the girls ! I had constant battles over my long hair at school. I left school with certain prejudices which I still, sometimes regretably hold to this day. These were things that my 'wise' teachers tried too hard to drum into me - classical music, suits and ties, they seemed to me at the time to be the 3 things the worst of my teachers held dear and somehow the fabric of society would collapse if we didn't all embrace these values. I still can't listen to classical although I can appreciate the influence it has had on some of the latter day stuff that I listen to. I have never owned a suit and have not owned a tie for 30 odd years (I bought one to go for a job interview once). The best teachers can change your life for the better, the worst can f*ck you up until your dying day.
Mr. Barber,music teacher, if you're still alive, do you remember telling me in 1967 that no one would remember the Beatles in 5 years time ? W*nker !

Hi I was going to say to steve , 40 years is a long time to let a teachers remarks play on your mind ... but then i thought about my time at school and remembered when i handed a painting in that i had done and the guy said " now thats what WE in the art world would call rubbish !" and you know what Steve that still hurts to this day! the bastard put me off for life from ever attempting to paint or draw , (not that im very good at it 'cos everything i paint or draw would be rubbish!) ...Bastard he's done it again !
cheers
tony

Yep - things that happen in childhood can stick forever,Tony, the good and the bad. I was fortunate that most were good for me. I shudder to think how that 13 year old girl who discovered her 15 year old brother shot in his own house will react in later life. How will she react every time she sees a shooting on a TV programme or in a film? Makes my gripe on classical music seem so petty.

Television de-sensitises, so that the most abhorant & distubring scenes seem commonplace. You can now go no the web & watch people being beheaded or blown up. Does the media mirror life or vice versa?