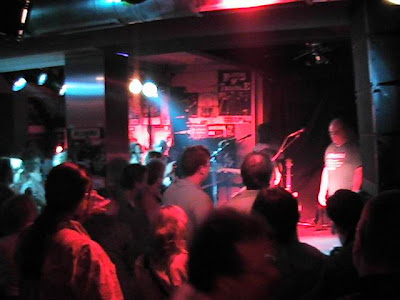 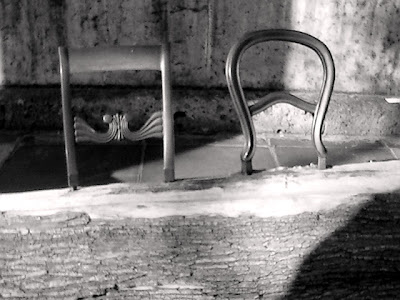 strange chairs seen out side an art gallery 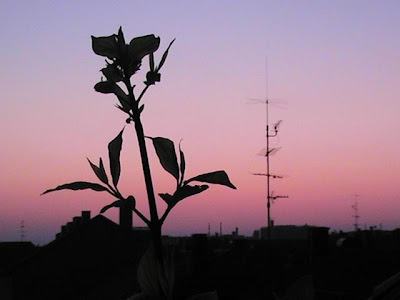 evening over roof tops
The EBB arrived back in London from Germany via Belgium and Calais at around midnight last night. Some of us had further still to travel and Spadge our driver and road angel was ultimately headed for Oxford. Saturday was a long day for him. Thanks for all your good stuff mate. Thanks must also go to tour manager Kris Gray who booked the German dates and Connie and all our friends in Osnabruck. 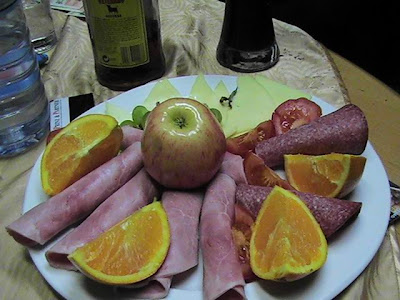 some dressing room fare
Again it has to be noted that the food and hospitality offered in Germany is far superior to that offered in the UK to a band like us and all with out any fuss or bother. 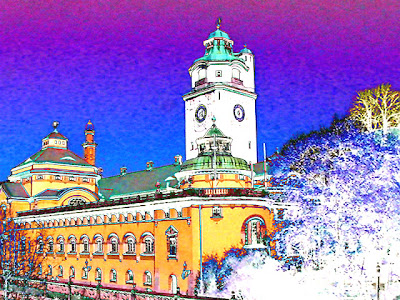 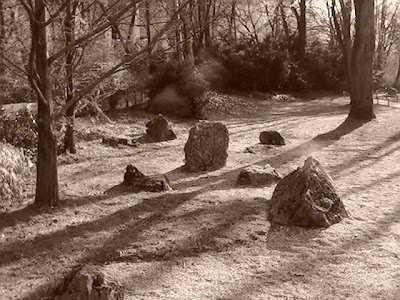 a stones throw away

A stones throw away from the bulding pictured above is the zen garden by the Japanese Tea House in the English Garden in Munich. Finding this was a high light for me. I spent a day off wandering around this part of town. I shot some video of young guys surfing on a fast water course running nearby which produced a freak wave. I'll show some stills from it in a later post. 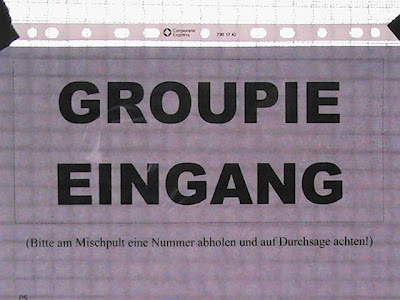 Not what you think

The tour has been great fun with many high lights and few lows and we are all looking forward to playing in Athens on May 19th. One high light of the last German leg was meeting up with Man. We had a few good laughs with these guys. It was good to be with genuinely nice people and share the same stage. There is also some thing different about the Man show. There is a music in it that is surprising and deep. Great to see the young guitarists George and Josh with drummer Bob and the paternal Martin Ace, on bass, still flying the Taff flag. They all came onstage at the last gig to join in on Poppy, our last song of the night. We played three gigs together in Germany and look forward to seeing the guys again at the Berg Hertzburg Festival on the 25 th July. The EBB as individuals all have favourite gigs from this tour, often the ones where the sound was good for them onstage that night. My favourites were slightly different from every one elses but we all concur on what we think were the the very best nights. For me being on the road with the guys in EBB is the best thing and working together to improve things every day. 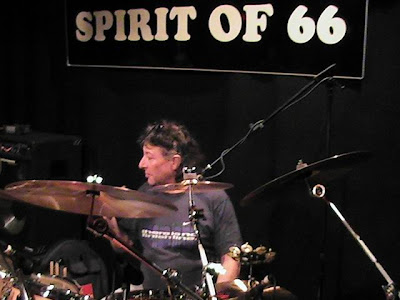 Up coming plans include adapting the show for Athens and getting a festival show together for the German festival. We have lots of ideas about how we might enhance the live show. We will be looking at replacing some “old songs” with other “old songs” such as Death of an Electric Citizen and There’s No Vibrations for starters. It also time to up date some parts of the show we will keep. Steve and Art have been developing a slowed down version of Metal Sunday off Super Chip. We will also be looking at new songs for a new recording project. We want to have new EBB material available for the 2008 Tour.
copyright e d g a r b r o u g h t o n 2007
Posted by edgar broughton at 19:39

Welcome home. Love the Zen Garden - but you saved the best till last - the last line is casually tossed in there - the 2008 tour, I guess that makes it official !!

welcome home or back ,i wish i could has been with you especially for the gigs with man (meybe i was,ent there physically but in spirt i was!!)
myself and Nick are really looking forward to the road trip to the Herzburg Festiaval its going to be magical, looking forward to new songs old songs and meybe a new recording and who knows meybe a live set !(please) also looking forward too more of your thoughts and writings in this the first supper
hope you enjoyed the goulash and chocolates .... now then pikey get back under the reed cos he's back and he'll come looking for you!!
cheers
tony

bye the way if you are ever in the area around Newark Notts there is a japanese garden , the japanese monk has spent years creating his little bit of japan if your ever up this way let me know and i will show you it . its very peace full and tranquil
cheers
tony

Hi Edgar & all the band,

During shows at the Spirit of 66, I often take some shots of the bands on stage.
It's my pleasure; Idon't do that for money. I give you here under the address of the blog where you can see some of the shots I take that night:


I hope you like some pictures. If you want to use someones for your website, NO PROBLEM !!! Just tell me what. I 'll appreciate to know.
(Your show was really fantastic)

P.S.: Sorry if my english is not right. My usual language is french.

Jean-Luc cruwels, your photos are absolutly stunning !
thank you for sharing them
all the best
tony

Jean-Luc cruwels, That is one awesome set of photographs, like Tony said, thankyou for sharing them with us.

Jean-Luc, I agree with Tony and Larry, GREAT photos and great job done, thanks !!

WOW ! Jean Luc your photographs are amazing. Thank you so much. I would very much like to use some of them.
Best regards
Edgar Broughton

Reg great photos, what song DID our truly perform ??

Dear All,
Jean Luc's photos are indeed awesome ! You should appoint him official photographer to EBB.
It makes me feel another transfusion of live EBB is required. Any UK gigs would be great, any place any time - weekend, weekday, mid-day, midnight. I would even arrange the catering!