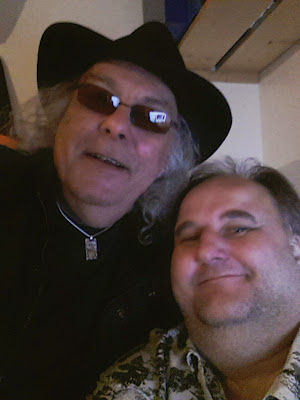 yours truly and Andy

Oh bliss! A fair days pay gig for my new friend Andy Palmer on Saturday past was a delight after the recent trauma of the GE. I was a birthday present from his friends.

My mate Dave drove me to Andy's place. It's always interesting travelling with Ramblin' and never, ever dull. The range of topics for discussion, as the miles fly by, is limitless.

On arrival we were warmly welcomed and made to feel right at home.  We had a few drinks in the garden and got to know people. Andy's mates are all proper, real people and the atmosphere buzzed with the chat and argument over recent political events and tales of life. A really nice bunch of folk I could immediately relate to. I couldn't keep up with the extensive imbibing as I had still to play but I would make up for that to some extent later.

Andy is married to a lovely Thai woman Mary who made the most amazing Thai food. I had eaten a little prior to arriving. I don't like to eat too much before singing but I had to sample the goodies. High light of the early part of the evening was meeting delightful Carla, Andy's daughter,  who is a fascinating little lass. Dave took photos of her while she posed, as only a confident little one can, and the resulting pics were lovely. A very charming and bright little girl.

So time to play and I played a few songs before someone asked a question about one of the songs.  That can't happen on a public gig but in some ones house why not? I love the dialogue that can spring out of these events. This was to be the way of things. Chat between songs and of course I had to tell a few stories about the songs and events around them.

a first outing for my lovely new Tanglewood


After a while I took a break and returned to the guitar for another set. Some folk had left by then but the remaining folks were very attentive and asked some very sharp questions about the songs and other aspects of my life. The time flew by and soon it was time to hit the road. It had been a very satisfying trip for me and I sensed Andy was well pleased with how the evening had turned out. Dave and I had a nice uneventful trip back and all was well.

Thanks to Andy and all for a truly memorable night and for making the 50th Fair Days Pay For A Fair Days Work a joy.

peace
Posted by edgar broughton at 20:35

Thank you so much Edgar. Two days later and I am still buzzing from such a great night. Not just because of your songs and stories - I could rave on about the music, but even more so because you brought so many other refreshing things with you (including Dave!). Humour, stimulating conversation, a warm attitude and much more that I could go on about. All of my friends without exception loved it and I have to say to anyone who is reading this, if you're lucky enough to be in the position to invite Edgar round, do not hesitate, just get on with it. :) Love and peace to all, Andy

A great night at Andys Edgar,enjoyed yours and Daves company,boomshanka!! and thanks Mark