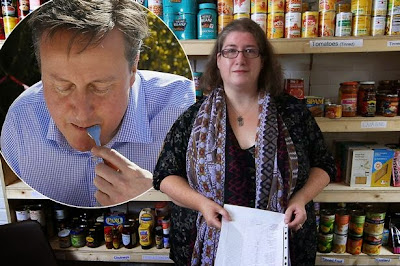 
I had decided to write about something other than politics in my next post but after reading the comments on my previous post I decided I still have a few things to add to the mix.

I am over the initial shock of the general Election. It was a disaster for the left and I am in no doubt that it was a crushing victory for the right. Now Cameron will be pushed hard by the right wing of his party to enact the Thatcherite policies they long for. It will make life interesting and perhaps only then will the last minute Tories realise they should have held firm and not succumbed to the scaremongering.

I hope the SNP will play it's part in curbing Tory excess but only time will tell. Perhaps there are Lavender Tories out there who secretly hope that someone will curb Cameron excesses but he has made a start hasn't he? His new anti extremism law is about due. The war on radical extremism?  No more demos?

History tells us that the development of new ideas of governance and government require people to think radically. Extreme views are necessary to test the wisdom of the mainstream. Would those who oppose homosexuality or multiculturalism or feminism be accused of threatening values of tolerance and equality?
Under the proposals, ministers would be able to silence any group or individual they believe is undermining democracy or the British values of tolerance and mutual respect.

We can understand a government's determination to prevent extremism that might lead to radicalisation and terrorism. But where to draw the line? And indeed, how do we draw up a definition? Yesterday Cameron  announced new plans to limit Trade Union powers.

Europe is already ridiculing Tory overtures towards a hearing for the UK request for European Union reform. George Osborne has been accused of "making ridiculous interventions". At this time, there doesn't appear to be much fertile ground for new negotiations with our European partners.

As one of my favourite comment writers on here wrote,  "we must accept the majority decision". I do, but it doesn't mean we have to accept the ensuing policies that will widen the gap between those who have and who have not. The very concept of  austerity policy is increasingly falling out of favour and is subject to damning criticism from NGO's.  Many fiscal experts say continuing with austerity policy will damage growth in the UK and threaten a new recession.

A recent Red Cross report stated that Europe is sinking into a protracted period of deepening poverty, mass unemployment, social exclusion, greater inequality, and collective despair as a result of austerity policies adopted in response to the debt and currency crisis of the past four years.
"Whilst other continents successfully reduce poverty, Europe adds to it," says the 68-page report from the International Federation of Red Cross and Red Crescent Societies. "The long-term consequences of this crisis have yet to surface. The problems caused will be felt for decades even if the economy turns for the better in the near future … We wonder if we as a continent really understand what has hit us."

Oxfam say "European austerity programmes have dismantled the mechanisms that reduce inequality and enable equitable growth. With inequality and poverty on the rise, Europe is facing a lost decade. An additional 15 to 25 million people across Europe could face the prospect of living in poverty by 2025 if austerity measures continue. Oxfam knows this because it has seen it before. The austerity programmes bear a striking resemblance to the ruinous structural adjustment policies imposed on Latin America, SouthEast Asia, and sub-Saharan African in the 1980s and 1990s. These policies were a failure: a medicine that sought to cure the disease by killing the patient. They cannot be allowed to happen again. Oxfam calls on the governments of Europe to turn away from austerity measures and instead choose a path of inclusive growth that delivers better outcomes for people, communities, and the environment".

From July to September 2014  11,100 people lost their homes due to welfare cuts. The homelessness charity Shelter estimates that over 1,300 people a day (560 households) in England are put at risk from eviction or repossession.

We have a choices. We trust those who we know have a vested in interest in profit over all else to decide who gets what or we resist. We look only to ourselves and our own for confirmation that all is well or we include others who are struggling. We accept that if a person has nothing to sell and cannot work they must suffer or we make sacrifices that will ensure access to properly resourced services for those for whom care and support is necessary. We create a caring society or we slip backwards.

Already Labour are acknowledging that they did not appeal to the aspiring. "Those who want to get on" said Chuka Umunna. Aspiration is a broad term.  Perhaps we should set our aspirational targets higher than mere personal gain and "getting on". Is the Labour party going back to Blair's Tory values where the outcomes  of the middle path and the fight for the middle England vote, always favoured the well off?  Chuka supports much of Blair's ideology. On aspiration, let us hope Chuka might aspire to telling the truth rather than twisting and turning his rhetoric to fit what he thinks voters want to hear. Yes, I know,  they all do it. I would like it to change.

I spoke about resisting. How do we do that and can we be bothered? Are you content with the way things are? Who agrees with Tory austerity policies?

From the Oxfam report.  THE TRUE COST OF AUSTERITY AND INEQUALITY-
As a result of the tax and welfare changes to be implemented between 2010 and 2014, the poorest two-tenths of the population will have seen greater cuts to their net income, in percentage terms, than every other group, except the very richest tenth. The Institute for Fiscal Studies found that the net direct effect of the coalition government’s tax and benefit changes will be to increase both absolute and relative poverty. Over the decade to 2020, an additional 800,000 children are expected to be living in poverty – almost one in four British children. Over the same period, an extra 1.5 million working-age adults are expected to fall into poverty, bringing the total to 17.5 per cent of this group. When incomes are adjusted to account for inflation, absolute poverty has already seen its largest year-on-year increase in a decade.

Finally ( I promise ) In Witney they still talk of the day David Cameron went empty-handed to the local foodbank in his Oxfordshire manor.The patch’s Conservative MP and Prime Minister broke an unwritten rule by turning up without a donation to help desperate families. Most visitors, especially politicians and ­dignitaries, look in their own cupboards or pop to the shops to take a few things to give the modern-day soup kitchens.

Jo Cypher, a mother of four who founded the Oxfordshire West foodbank in a Witney church three years ago, recalled: "He was very nice, very polite but I’m not sure he was taking any notice of what we were saying". 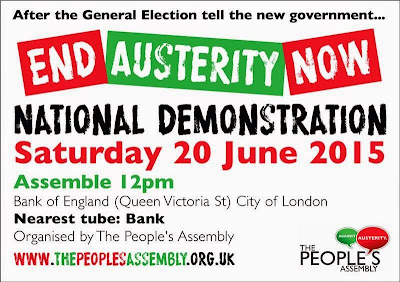 Posted by edgar broughton at 18:44

Ha ha! Lavender Tories! What a great term and not one I would be proud to own.

On lavender Tories. It isn't a derogatory term, as far as I am concerned. I think the Lavender Tories are the people who changed their minds at the last minute. They are a bit wobbly, I hope. They might change their minds again. We'll see but let's have the continuing debate around the big issues. I think a lot of folk who voted for the Tories might have their conscience disturbed in the coming days when the 12 billion welfare cuts bite.