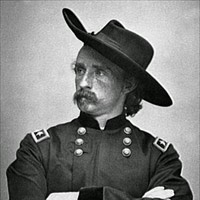 When Lt. Col. George Armstrong Custer was defeated at the battle of Little Big Horn the account was glorified as an heroic stand against  the overwhelming number of braves of Crazy Horse of the Lakota Sioux; Sitting Bull and Gall from the Hunkpapa Sioux; and Lame White Man of the Southern Cheyenne. In fact more recent examination of the battle and battlefield, shows that Custer's men fled under the superior fire of the native Americans automatic weapons against their own single shot rifles. Most cavalry soldiers were shot in the back as they fled. Custer was an arrogant man who ignored or underestimated the facts on the day, put his own narcissistic point of view above all others and led his men into catastrophe.

Watching the political leaders debate on ITV last night it seemed to me that Cameron was surrounded and the cavalry were not coming to rescue him. He stands alone in his view of the way to address the deficit and the speed with which it needs to be done.  Nicola Sturgeon, Leanne Wood and Natalie Bennett were agreed on at least one thing. The coalition has caused extreme hardship through austerity policies. They spoke about justice and a fair society where the poor don't pay the cost of Cameron's mates financial disasters of the banking crisis. Of course Miliband is in agreement with the women on the deficit issue and poor old Clegg is a lost boy with nowhere to go. Farage is a clever and manipulative problem child and some where among his supporters is the man or woman who would want to lead us back in time towards the darkly ignorant days of Enoch Powell speak and National Front. UKIP is possibly the most dangerous entity to raise its ugly head in a long time. I know a few ex Labour voters who are teased with the idea of voting UKIP. Don't do it!

If I lived in Scotland right now I think I would vote SNP or if in Wales Plaid Cymru. Why? It seemed to me that all of the women speaking last night were like reasonable, modern socialists. They seem to me to be people who might have left New Labour when it began to turn it's back on decent and viable socialist principles in favour of Tony's corporate mates and his dreams of glorious legacy. All of the women spoke of a new beginning where fairness and equal opportunity should prevail. It was exciting to hear this and what a contrast to that other woman who tried to break the unity of the working class and who successfully reduced Trade union representation of the UK work force to an almost impotent power. Some will say and a good thing too but not me.

If Cameron gets his way the cuts will be punitive and will fall, yet again, on the poorest and most vulnerable. We can, for the time being, dismiss Farage as a possible leader. We can also dismiss Clegg. In fact we can almost forget about him as being a possible anything in the new government. Still it must be said that even he is strongly opposed to the speed and manner in which his partner David would continue to cut public services. I believe Nicola, Leanne and Natalie are a glimpse of the future in politics and all of their ideas resonate with me more than the men's with the exception of Miliband and finally I can say that I am beginning to hear and see a Miliband that might just be worth his salt. Time will tell. Some of us wondered, where was the passion? Where was the standing up to Cameron that we desperately needed in the past. It is always difficult to seem effective in opposition and now that Parliament is dissolved perhaps we are beginning to see his true colours. In any event Cameron's repeated claim to achieving his fiscal goals are dead in the water. Borrowing is higher than ever and the deficit is still there. I wonder to whom do we owe these billions? But that is another story.

We can be sure that if Cameron is in the picture we will see a continuation of unnecessary austerity measures that will limit growth and generally further reduce morale in the public sector reducing the effectiveness of vital services. I would be surprised if you don't know someone who has been affected by massively reduced social services and the resulting negative effects on the NHS. Cameron constantly talks about " The hard working British people". He has a Farage like tendency to forget that our NHS, for example is staffed to a large extent, by people from all over the world. Of course he knows it but still we hear the mantra representing " the hard working British people". What about the unemployed and those who are unable to work? Is it right that they should suffer most through austerity measures? It is obvious that with so many part time minimum wage jobs and zero contracts Cameron's latest employment figures are a deceit.

There is still some way to go before we get to vote. I still think there is a case for not voting at this election but the very idea appals me in some ways and my parents long passed would be very shocked at the idea. Also it would require a massive non turn out to bring real change and that is not going to happen. So, I would like to think that Ed is worth a shot but is he? He sounds clearer and more believable than he has previously. He should take serious note of some of the things that are being proposed by Nicola, Leanne and Natalie and only make promises he can keep.

For me the high light of the debate was that we could see the difference between the leaders and their policies. We have a choice and it is to vote for the interests of the very rich few because we think they are most important for our health and wealth or, we vote for a fairer and happier society. Over simplification? I don't think so. It is not always possible for a leader to do what he or she really wants. Listen to The State of The Nation speech by any US president. But we need to see real intent now. Intentions that can be achieved and not the familiar betrayal, we are all familiar with, as soon as the incumbent leader is installed. This will always be a new challenge for anyone raised in the Westminster culture of - I say this but I will do that.

I wish you all a happy holiday.

peace
Posted by edgar broughton at 19:27

I wasn't that impressed by any of them much but I agree with you that the women appeared to offer something progressive. I think Miliband is basically ok if as you say he could deliver on the economy while relieving the austerity burden on those less fortunate. Will any of them keep promises made now?

Only leaves one choice....vote liberal

Custers prob was TOO MANY CHIEFS.

Thinking of Custer and Cameron there is one really common feature and thats the poor foot soldiers as usual. Lead to their deaths by idiots and for what? Still the same today isn't it?
Got a busy life getting by but think of you all often. Bob is still here so that is some thing. For many out there things are very tough right now. Please don't let Cameron back in.
Love to all
Mary and Bob
x

Heading over to the Robin for tonights gig....cant wait.

A stunning show from Luke,enchanting.Followed by Rob who was on form.A disappointing attendance ,however please remember there were only 22 at the Last Supper.

I wish I had money & use of a car, as I would've been there. Re the electionGot main 3, UKIP, Green , Whig or Monster Raving Loony Party, I think my vote will be Whig or MRLP 'cos I can, wanted to vote MRLP for years.
Re immigrants, I gather they can afford to work for minimum wage as they know it's temporary, and they share a rented house and sleep say 12 adults in 3 bedrooms ( I've one bedroom and I gather I'd be overcrowding if I slept 4 adults in there). don't blame them as they're just trying to improve their lot in life, but the governments for opening up the borders. This has been a true blue area, UKIP it would seem are the only viable alternative, but I don't trust them not to privatise the NHS, yes it isn't perfect, but privatisation is not the way. Tim and myself both worked on the railway in the days of British Rail and I was made redundant shortly after privatisation and I became Tim's carer as well as his then wife. This site may interest you founded by Brian May from Queen, those who know mw know I'm nuts on Queen!!! http://www.commondecency.org.uk/