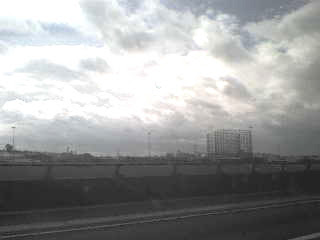 The above pic was taken on my phone on the way to the Bilston gig which now seems an age ago. The day was bleak and made all the more so by the first indication that the free gig, scheduled for Friday in Twickenham, was cancelled by the promoter. We were all appalled at the idea that some of you might travel to Twickenham to the Friday gig. We tried to let as many people know through the site but I know of quite a few people who missed the announcement and made the journey. It was in the end just another day in the life of the EBB but it did have an effect on the EBB mood over the couple of days we were away. News like that is surprisingly deflating. It isn’t as though we have never had set backs, far from it, but I still hate those kind of surprises. Still, a band like ours is a fortunate beast. We all have a deep mutual respect for each and abiding concern for the well being of all of us. This carries us through such set backs and as the old saying goes “ the show must go on”. I have to tell you that from time to time our experience tell us that this is not always the case and there must be limits to exposure to emotional stress that might be avoided. In spite of this the highs, both social and musical, have sustained this band since we first got together again a couple of years ago and still do so. In spite of our seemingly very occasional forays out on the road we have played a lot of gigs and it shows on stage. There is a solid commitment from every member of the EBB to strive for a better standard and if it were not for this there would be times when life in the EBB would be extremely irksome. On the road there is always the chance of a pleasant surprise and my thanks must go to the guys from Anglesey, at the Bilston gig, who offered me a days offshore bass fishing trip when I am next in the area. Where’s me rod? I will take you up on that guys.
We all got together at Steve’s a couple of nights a go for a band meeting. After a long session we have begun to establish the seeds of our plan for the coming winter and 2008 but it still needs a lot of work and that is just the plan. The main priority is to make a new album. This looks like being a home made album and I truly believe there is no reason to think it won’t be our best. Wouldn’t that be nice? It would be a coup We have to find the best way to plan and execute this in the most effective and economically viable way. We discussed improving the web site, merchandising and sketched out future plans for publicising it all. I am always pleased to find that you and the people who support us are never off the agenda at band meetings. In this respect nothing has changed.
We have rehearsals scheduled for the next UK gigs coming up and expect to add one or maybe two news songs for those shows. We’ll have a publicist on board as well so that should be of great help.
Thanks to every one for the motley array of photographs you have sent us in the past few months. Some of them are very good and we will be adding new photos including some of yours to the site. There is the first hint of an autumn chill in the evenings and I fear my “Indian summer” will not materialise though, it still might be one of late 2007's surprises. Some how summer escaped me this year for the most part but so far, I have really enjoyed this year with all it’s ups and downs. For me being in the EBB is still a privilege and a source of pride and I thank you for your continued support.

Posted by edgar broughton at 22:15

Thanks for the update Rob - it's good to hear of your plans. Our support is permanent and the obvious respect you hold for us 'out here' is heartwarmimg.
On a practical note, is there a hint of where the TBA gigs might be held ? I have to organise 'The Magic Bus' !

Regards from the Dales.

I was really looking forward to the Twickers gig and to finally meeting the Mad one wot Rambles and Neil from Yahoo et al.
Not to worry.
It's the third time I've been disappointed in this way - last year I was at the Ilfracombe gig that didn't happen and in 1971 (or something) I spent an evening tramping around Brighton trying to locate the EBB secret free gig which turned out to be inside the cells at Hove police station !!
These things happen - I'll still be here, Guys.
As for the future gigs, does TBA stand for 'The Brighton Area' ?

By the look of the itinerary I think 'The Bradford Area' might be more likely ! Sorry mate. In 1970 (or thereabouts)I spent 4 hours on various Manchester buses trying to locate a school playground said to be hosting an EBB free gig. I eventually found it (and them) and here I am 37 years later still trying to locate where the band is due to play !!
Unless you fancy a flight from Southampton to Leeds it looks like you could be off to the Co-op for another £3.99 bottle of plonk.
C'est la vie.

Regards from Paul in the Dales

Was worth going to Leicester just for the new songs. Six white horses , what a song! Was that the first airing of Arial? It seems to ring a bell. Your mothers got an aerial so shell know when you are a million miles from home with no where to go. Such is the gift and curse of moms.
I love it.
Sam
x

Hi Paul,
I think you're right about the itinerary ! I'll have to come to terms with it but am not giving up hope until the TBA's are filled in....you never know !
Not sure I can afford a plane to Leeds, but it sounds like a good idea, thanks. Will check online prices with
'cheapheapswithoutsidetoilets.com' just in case.
Who knows, if the new album is successful there might be a tribute band by this time next year(every other band seems to have one now) - perhaps they'll play 'darn sarf'!

you know Sam tht song Six white horses has been stuck inside my head too for the last couple of weeks, its really developing in to a classic
cheers
tony

Travelled over 50 miles to Leicester see the band after having not seen them for over 10 years. Was a bit concerned that I may be disappointed as I had been a big fan back in the 70's.
Was I mistaken! Edgar's voice was fantastic and the new songs had a real impact. The trip was well worthwhile and from my conversations with other's there I was not the only one who was well impressed with the gig.
Thanks guys for a really good night.

Steve's idea for a tribute band is an interesting one.
Last year (after several bottles of Co-op plonk) me and a couple of mates tried a version of 'Side by Side' on the gear my boys had set up in the conservatory. You've never heard such an 'orrible racket! The only thing I could perfect was Dad Broughton's introduction from the live album -'tonight is intended to be a memorable occasion...etc'.
I suggested a contribution to the Performing Rights Soc., but my mates said it would be better to compensate the neighbours.

I suggest we leave it to the experts.

another song thats been stuck inside my head for a couple of weeks is.....ooohh ooohh oooh everybody was kung fu fighting ohhh ohhh oooohh
can someone please help and tell me how to make it stop
cheers
tony
oooooh ooooh ooohhh everybody was.....

Tony, you think that's bad. When Sugar Sugar came out I hated it instantly (still do), but couldn't get it out of my head for 3 weeks! Which unfortunately of course, means it is a great Pop song.
EBB tribute band? Naaaaa! - anyone capable would be making their own music (a natural progression from just considering becoming an EBB tribute band). Shit! I think I just paid the chaps an overthetop compliment - must balance the Ebbrilibrium by asking - what EBB songs do you think are......... (no use counting the dots to figure out wot I was going to say)
More EBB darn Sarf is right Shoreham, those upnorthers get all the fun. Sorry to hear you keep missing them.
Oh well, better get back to cleaning the roof with a toothbrush, whilst pondering how a Coke snorting alchaholic who doesn't understand what he's saying, as he is saying it, gets to run the most powerful country on the planet?!

Was only joking re the tribute band - can't stand the idea of 'em. Although I did once have a decent night out when, against my better judgement. I went to see a Madness tribute band.
Paul, it's very thoughtful of you and your mates to think of the neighbours but when I strum my guitar loudly and wail out an EBB tune at the top of my voice, my neighbours love it ! In fact, they were enjoying it so much the other night, they came round and smashed my windows so they could hear it better !

Hi,
Why not look at some sort of pre-sale of the album (see Marillion's website - they've done it very successfully in the past). I'd happily stump up my 15 quid six months ahead if it gave you the space to record a really great album.
pault@deepsouth.co.nz

Thanks Paul !
We have some funding in place though we have considered some thing along the lines you suggest.
Thank you for your support. I am totally sure the next album will be worth the wait.