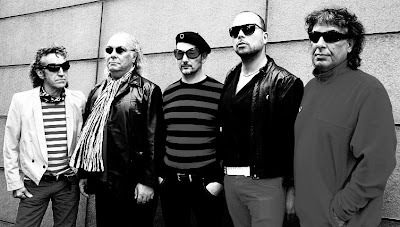 photo by Chrissy Hamlin
Over time the EBB has been associated with what used to be called Agitprop events and activities. The stories and the experiences of fellow participants have been attached to the so-called “legendary” status of the band. From the earliest times it always seemed to be necessary for the EBB to assert its aims and objectives in a strident manner. I had experienced conflict at home from an early age and in spite of what was in many ways an idyllic child hood the spectre of domestic conflict was never far away. I suffered deep anguish like all kids who witness. I learned to be loud but have learned to be quieter over time. Through out the days of the EBB there were confrontational times with agents, promoters and even road-crew members and very occasionally amongst the band. Our political / philosophical position and individuality some times created a “them and us” culture which some times produced conflict and confrontational behaviour. We always argued our corner quite well.
Very occasionally there are still situations when the ire of the band is evoked such as in the case of the recent debacle over the cancelled free concert with Mr Terry Rawlings, at Filthy’s in Twickenham, last September. At times like these there is no division between us and we act in concert. The combined power of the fully concentrated and pissed off EBB and friends ( we have friends in low places ) is a force to be reckoned with and collectively we have a long memory. Still, we are a peace loving crew though I admit some transgressors may carry the odd psychological scar. We have frightened some.
I can say with certainty that it is so much easier to turn some one off than on and that no amount of raising of voices and shaking of fists is a substitute for good, reasoned discussion. I earnestly implore any one who ever feels the need to physically lash out at a person to make your exit – Don’t be there! It is rarely necessary and there is rarely a defence for such acts.
It seems to me that I have learned some of my lessons quite well, overturning what might have other wise have been entrenched behaviour from an early age and a tendency towards aggression as a way of negotiating. We should all try to limit our actions that tend towards a violent style no matter how low level it might seem. I suggest if we are to be judged it might be reasoned that we might fall or stand by the harm we have done not the good. I hope this is the case for many political leaders.
I do believe there are historical precedents for justified political violence. I wish it were otherwise. It is probaly true that what ever your view on Fidel Castro et al, had they not liberated Cuba it would still be a US sponsored haven for gangsters and their political mates. If the ANC had renounced armed struggle there might still be apartheid.
If we love ourselves and are secure and act accordingly surely there is no need to threaten and break and it will be easier to acquiesce and make, encouraging others and imbuing them with confidence and strength. Having said all of this you might be forgiven for thinking the above photograph, taken last Saturday afternoon in London tells another story. (lol)
I like it for its clichéd, brooding feel and unity. Soldiers of the light? Mr Rawlings check it. Don’t mess.
Peace
copyright e d g a r b r o u g h t o n 2007
Posted by edgar broughton at 03:34

I hope I qualify as a friend in a low place (I am down in the dale). I certainly wouldn't mess with you lot. You look like the 'usual suspects' particularly Claude Rains in the middle. I hope arrangements for the November gigs are progressing without difficulty. Looking forward to putting a few miles on the clock. Best wishes to Rob for your special birthday.

Hi Guys and thanks for the kind words. My birthday is actually the 27th - Saturday but I decided to have several birthdays this year.

Sorry. Blame wikipedia for the rumours

"Hi Guys and thanks for the kind words. My birthday is actually the 27th - Saturday but I decided to have several birthdays this year"

Several Birthdays? you're not the Queen of England you know.

Have a great day or days Rob:-)

have a great birthday Rob , and if the promoter do'nt come up with the expected send one of your EBB tee shirts round,he aint going to argue with that , i shit myself the first time i saw it:) its gotta be the hardest looking tee shirt ever!!
it sometimes looks a bit distorted especially when its on my fat gut!!!
still i wear it with pride and no one dare argue with me when ive got it on
cheers have a great birthday see you at a gig soon
love
tony

Not sure if the picture looks like the Mafia or the worst Ray Charles lookalike competition ever !