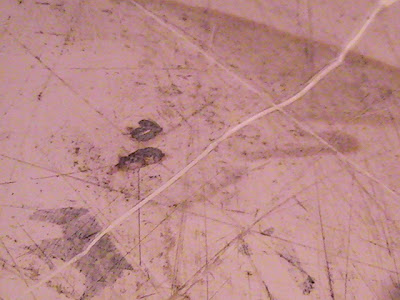 Yesterday - a map for the second beginning
This boy cumza moi ta tell his dada gonna kill im ifen he done marries a girl back ome – lies a wiv her n meks her wiv kid – mek him settle and love god but – he done wanna – he wanna shake and roll ta rapz und hopitty hips sway in the far off- I seez a “thug” fra Indus wiv skarff around his throat – eyes a bulgein like a dead fu nothin’ – I’m wide awake ….As Imaad and I ran further away from the shooting I began to realise that no one was chasing us though bullets whistled past us and made sparks as they hit the steel rail tracks or kicked up the small stones on which the tracks were laid. Eventually the sound of the rifles firing behind us grew distant and we were safe for a while. It was then I realised the men firing the rifles were not trying to hit us. They were merely having fun. Still the railway tracks lay spread before us in a tangled weave of rusting or shining steel. We ran more slowly. My heart was pounding and I was covered in a cold sweat from head to toes. I was glad to slow down. The boy moved easily over the rails. I could only follow with much less grace. The tracks extended before us for a half mile before they ran inside huge warehouses which flanked the rail yards on three sides. The fourth side of the yard was where the tracks entered the yard from every place in the country.

Hearing things now and am I seeing the shadow of angels or ghouls out the corner of my eye? Running. I'm only out of breath, not hope. Bound to be feeling the strain now. Glad to be feeling tired out because I knew that I was. Glad to be feeling that there was some thing rational to it. I was tired, I felt tired that was very good. I supposed for the first time in my life that it was possible to be afraid of any thing or every thing. I don't know why but that seemed to me to be slightly re assuring.

Ever been in a terrifying dream and tried to get out of it. Underneath the terror you know it will end. Underneath it all you know you have never come to physical harm in a dream. This was different. I was slowly falling to pieces. Every part of me ached and I could smell the world we were in and it was beginning to stink. I knew I was awake but was not sure if I was sleeping. I know. It is with me now. Some thing is chasing me. I can tell by the look in his eyes that Imaad knows what I know. Some thing terrible is with us and it goes where I go.
I see me running while I look at Imaad skipping over rail tracks as deftly as a young buck deer. I see me from above and running and hearing men shouting behind us. I hoped each step took us further from the danger. I just hoped that what lay ahead would less be dangerous and more comfortable. I felt weak from stress. I ran around the corner of a high brick wall and found Imaad sitting waiting for me. He looked hard in my face and said one word. " Rest". I fell to my knees and tried to breathe again. Soon I was able to sit back against the wall which was warm through my shirt. It felt good to be stationery. It felt good to be with my young friend. We would go on after a little rest.
I felt an over whelming desire to sleep. But this was not the place. I knew if we stayed sitting for more than a few minutes we would both fall asleep out there in the open. Five minutes later we were on our feet and moving. The sun began to dip and the evening began to fall. The shadows began to lengthen, spreading slowly and softly across and over every thing. I hoped we might be safer in the darkness of the night when we might travel or rest undetected.

There it was again, like an old familiar tune or a fragrance from childhood days. It was the strangest feeling. It was part of my experience. It made me sad and lonely. At the edges of or beginnings of depression it made me envious in a vague way. I seemed to be missing some thing I'd once had but could not remember what it was. I felt bereft and I was overwhelmed by the sensation of time running. Time was all I had. I knew this because time passed but had not yet run out. I had little else but this time that passed reassuringly. I suddenly felt ridiculous. Here I was analysing things when I couldn't even be sure that I was using my real name. Hi, I'm .................I'm very pleased to meet with you............I call myself R .

It is 7.43a.m. The sun tips up over the edge of Stanton Reach as the GARden crew begin the days work mystic raking the sand and scrubbing the flags.There is just one day to go before the Cream Days festival again. Beyond the pipe crew shelter a man rides slowly steering his tall black charger across a market square in the pale dawn light again. His name is Matthew. One other accompanies him riding a smaller lesser creature. The few people going about their business at this early hour hurry in any directions that lead away from the riders.
( technical note : a small regenerator propcard goes down in the clean air melkers. Filters racked 1112/45 to s8yewf/22211 are switched in automatically. Qualm Alarms 12ty 9 and 234re9 are triggered again) This time we watch terrified the Second beginning will never end. The Tanium is swollen with the emotional outputs at the very heart of the Ring and it is nearly time to let you out and in on a very big secret – Imshalla …
copyright e d g a r b r o u g h t o n 2007
Posted by edgar broughton at 22:06

I'm scratching my head a bit with this one,so where's it coming from?

Maybe from another dimension. Try reading it again as it begins to have a rhythm and sense all of it's own, providing you suspend your usual expectations.

Actually I've missed this writing. This is deep and strange. You have to change your way of reading it. I love the way it takes you some where different and the way people speak. Imaad must be a muslim boy. This piece is about people under pressure and being different ( no hands or legs )and if I remember correctly Matthew Hopkins the Suffolk witch finder is back again. When is the whole novel available is what I wants to beez a know'n?
Pat
x
ps I LOVE ONE xx

Stanton Reach in The Wide Meldings, I were born there ...bootiful

In my opinion you are not right. Let's discuss. Write to me in PM, we will talk.