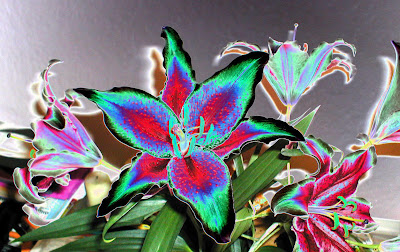 Lo Smeegen Look at lovey words I found in R's Trajer box. He says it is Wictaorian and is a strangeling thing when time do finds a mate ...then and noo or summat ....lovey tho ennit ... 'ceptin boot kidz in a skool ............

There is a wondrous thread that weaves thru all my days filling me with hope in the hours in between the darkest times and first light – then a single thought keeps me afloat when other wise I might sink or fall from flight – be not afraid – nothing is permanent - I know I shall look upon thee at least once more and soon -
A hundredth farewell is none the less harsh - chilling and hurting us - making the longing worst – mean while and waiting – I have these thoughts
Most of us have won and lost – been loved - beguiled and reviled – abandoned and bereaved – addicted to some thing and or some one - we have all been lonely lovely and sad -
You wreathed in smiles waiting to be found - saved me – together we can be raised – aspiring – time is running – kiss me again -surround me with your sweetness – lovely in light – we have known madness - have grieved for the old ones passed and the almost new – this does weigh upon us all - we shall have reason for pain but there is no need to hurt forever – no need to be more than in some way – a little better –
Speak to me of folk - I know how well you do to love them best of all – I do love thee – we shall be together and speak of how wonderful this time is - when the sun sets shall we run ? – run now my darling – run away now with me . . . . .

. . . . . these days are so filled with choices and questions – I wish to say good bye to all of it – to know you - how filled with grace in wilderness we both might be - ribald and comrades – warm as long held hands – entwined - wild as can be - searching all of the worlds for truth or lies - changelings when ever we wanted it so to be . . . . .

. . . . in this place there is a door here – a glass way – a portal to a poorly made society – lost in the sand sea there are men who hate freely – is it possible they could hate love ? – I would rather they hated me - then they might only be badly mistaken instead they are doomed– yesterday in Gaza ( during the Second beginning ) some men shot at and killed parents and children attending a school social event. – they did this because they say it is wrong for young male and female children to play together and to listen to pop music – they say they will attack School Sports Day events throughout the summer where these sins are committed. . . . .they did this in God's name . . . .

There is a wondrous thread that weaves thru all my days filling me with hope in the hours in between the darkest times and first light - Do you know how I do love thee ?

As ever I remain your devoted protector ……….

ah! lovely words - where do get it from

What very beautiful words. Full of love and devotion. How fabulous it would be to have something so lovely written for you.

However it is very disturbing to read the interruption and know that in the middle of such outpouring of sweet passion we read the terrible words about the sweet little children being slaughtered. I am sure that there is no God that has ever stated that such evil should be done in their name

'Anonymous' - What about the gods worshipped on this planet, they're words seem easily interpreted toward viciousness and vile deeds. I blame all gods, particularly as I see them as a human invention anyway. Me, I'm just plain scared of dying and becoming nothing, which is exactly what will happen, unlss our human fantasies turn out to have some reality.

Oooher! made me go weak at the knees
x

Afraid to die - afraid to live - don't worry about being nothing it's what you are any way - it's allright - it's how it is supposed to be ...... while you ramble time is running so do it all NOW !

tony
lincoln
ps i'd vote for you Rob!

Rob, yes, wuz liverlys werd coscorse! - I was moved (fortunately not enough to put me in danger of passing traffic)

Anonymous - Am trying to do it all now, but, unfortunately, serious pain is preventing me from riding my bike and walking the hills, so I'll have to wait a bit. But at least it is keeping me off work which is another thing that gets in the way. Wouldn't it be nice if one could 'do it all now', but 'other life/lives' often get/s in the way, unless you're lucky. Life's not all, 'what you make it', unless it doesn't include other people. Keeping ones sense of humour is everything.
Incidently, fear of dying is probably the wrong phrase, I'd just like to live forever, particularly without having to become a Christian or whatever, 1st. And it was those god basts that got me interested in the idea in the 1st place!! Hell, I'd like to see wha's after Armaggeddon!.

Onto another 'god bast' that has been mentioned in this postie - Tony Blair.
The media are all asking 'What were the Blair achievements and failures?' 'What is his legacy?' - I've wracked my little brain for something positive I've felt about his Prime Ministership, and, apart from feeling good the day he 1st took office, the only other thing I can think of that he has done, that I would give him some little credit for (and it is one thing he can be proud of) is the Northern Ireland Peace Process. But even of that, there are plenty of people you will never hear of that should be given more credit than he.
Margaret Thatchers words will forever ring in my ears 'He's the greatest Tory Prime Minister, since I was Prime Minister' - says it all really.

Love, y'all
yours in agony
ramblinmad x

Hi Ramblinmad
Agreed about blair. Lincs Tony sounds gutted as are all good Labourites.
Wanting to Live forever, fear of dying are much the same. Preparing ourselves in life is probably best.
I think Rob's writing is about being in love. Not many men write like this do they? So who do you love ? Are you in love? Questions and more questions. Oh to be loved

I so agree with the comment not many men write about being in love, and even fewer with the same skill and feeling that this piece has. Having said that not many women do so either.

It never ceases to amaze - the things people do in 'God's name' - I used to blame religion but it's not really that as such, No it's people - people who need an excuse to hate, people who need a reason to kill, people who need a justification for their vile acts.
Most people keep their faith to themselves and use their beliefs (however daft they may sound to others, including myself) to help them through the bad times. I have no problem with that.
But too many people cherry pick the bits that suit them. Many religions contain hate and love in equal proportions - do you cherry pick 'love thy neighbour' or 'an eye for an eye'? It's up to you, but if you choose 'an eye for an eye', Mr. Blair - don't do it in my name, please.
Beautiful prose, Rob but was it written before or after you discovered she was a Chelsea supporter ?

Steve , you are right about religion being used by people as an excuse for many of the bad things that that they do but we should also remember that many good deeds are also done in the name of religion. It seems that religion is what the individual makes of it. Its a bit like politics isn't it?

Best wishes to everyone

My answer in a nutshell - for me, life's much too short. I would really like to live long enough to see the human race either, come together, or destroy itsself. But bottom line, not being in any way sure as to any devine 'purpose' for human existence, I would like to be able, at least to live until I was bored with it!
and hey!, isn't all organised religion built upon the exploitation of both, the fear of dying, and the worrying question of a reason for being here with the promise of somewhere to go to?
No, fark, organised religion, too much blood, and some often questionable good. Didn't I read once that Mother Theresa wouldn't help any kid that refused to become Catholic?
For me, just being alive and in awe, is the thing, doing as you would be done by, trying to keep your sense of humour, and making sure you have legal lights on your bicycle at night.
Re the loverly words from the blog, I'm a bit confused, by the statement by one, regards such
words coming from a man, and being rare? Er, think love songs? thousands down the years, too many wonderful ones to mention that have touch my heart and mind (soul?!).