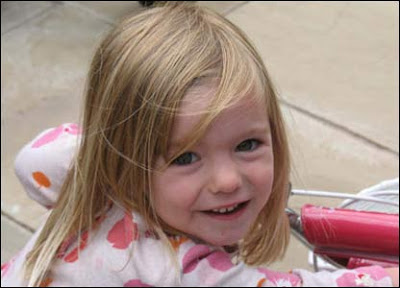 Missing Madeleine McCann
Art forwarded an email chain letter to me purporting to be from Phil McCann the uncle of Madeleine who disappeared in Portugal. I have no reason to doubt the origination of this “chain letter” or the sincerity of it’s aim to circulate a picture of Madeleine. I am usually very anti chain letters but this is different. The writer tells us that the story is only being covered by the media in Portugal, UK and Eire. Phil McCann writes that the family doesn’t believe Madeleine is still in Portugal. Please look at the picture at the top of this post and if you think you see her – you know what to do. Don’t delay.
I keep every photo I use in a post on the Blog in a folder. The photo’s in there remind me of the happiest and the most desperately sad things.

At this time one week ago the EBB was walking on stage at the Gagarin gig in Athens. We had never performed in Greece and only Steve had been to Greece before. The offer to appear at the Gagarin came out of no where, as it were and we are all very glad it did.
Years a go when touring almost every day I would notice how we would use a certain route or motorway or pass through a certain town and then months would go by even years before we would make the return trip. It wasn’t simply that we were on tour in a linear and carefully structured tour that sensibly took us in one direction that was logical and planned. If only! The randomness of scheduling back then and some times today often means zig zagging across country or going up and down a motorway several times to cover north to south or east to west in spite of our representatives serious attempts to avoid this. So, when the Athens gig came up to be followed only days later by Liverpool FC’s appearance at Athens in the bid to beat Milan and win the European cup, I was intrigued by the co-incidence or as some might see it – synchronicity. Any way we all know what happened there and it was a disappointment for us LFC fans though I think the team acquitted them selves well enough through out the competition. The EBB made a few mistakes during the Gagarin show and LFC made a few in their execution of their game but their’s were much more noticeable than the EBB’s and more costly. LFC made a couple of strategic errors in Athens as well and I can honestly say the EBB did not. Oh well!
Well done to Chelsea for whacking Man U with a goal in the cup. I guess we all got what we deserved as far as football goes and we’ll all wait to see what new seasonal signings bring and then before we know it will all begin again. Ace!

The past few days have carried me through a roller coaster of emotion. Accumulated pressures have taken their toll. I feel an urgent need to move on with a new vigour rejecting any thing that obstructs the creative flow. The clock ticks and goes bloody tock in the next breath. A change is as good as a rest and I need a big REST. I have so much to do and if I am honest it’s as much to do with my own lack of self motivation that I haven’t finished some stuff. I work hard but some times it takes a lot longer to write my stuff than I am prepared to admit. I do spend quite a lot of time in a kind of dream exercising an artistic right (LOL) but I do know how hard it is to start work with a blank sheet of paper on a slow day and to turn that into a song or some other kind of worth while writing. The EBB will be meeting over the next few days to plan recordings of some of these songs.
I guess we expect we will have a finished album by mid 2008. We are also planning to have a few surprises in an updated show for selected UK gigs in September. Details to follow. Look out for changes on the website over the next week or so.
Don't forget to send photos for consideration for the gallery to edgar.broughton@btinternet.com
Mean while I have to make some time over the next day or so to get a ride in on my newly serviced and beloved Bianchi bicycle. Watching the Giro Tour of Italy on Euro Sport has stirred the blood.
Finally, I have a feeling to say that in spite of the sadness in this world which is evoked in the photo of Madeleine above, there are good people doing good things every where. It is some times difficult to see that potentially, as always, this is a great time to be in the world! Out Demons Out - Peace.

Posted by edgar broughton at 22:42

No Bianchi in Giro though. Be safe Rob.

Just finished listening to Super chip for the first time. Phew! It's a demanding piece. Night Hogs Night Hogs ugh ! Just when I am relaxing and thinking every thing is covered for now I'll think of Madeleine McCann and the other little people in trouble but I think we have to learn to carry on not take it all on in our hearts. Difficult at times but essential. You take care Star and don't stress.
x

Da Luca is the best but will he ride the TDF? Its been a while since we had a top Italian double.
pantani was the best for years. I enjoyed your blog about him and your dad some time ago. All the best Edgar and take it easy.

There should be a 3 week tricycle tour, imagine them coming downhill in the Pyrenees?!! - whoops! there goes another one.
By the look of what's been in the media recently (Zabel etc.. 'coming out'), it would seem that poor old Greg Lemond is finally getting some vindication for his outburst 'I was the last clean rider to win the Tour De France'. As a rider he's one of my all time greats - poetic justice from my perspective regarding his hunting accident though - I know, that's a bit harsh!, I take a little back then), but then, I'm a vegetable!
Still, I wonder who's next for the 'outing'?
Rob, my bikes sitting here waiting to keep yours company, and my Sciatica is getting better - hint hint.
Sorry bout Liddypool, I thought they played the better, in my umble op, and I thought Milan won it with 2 players, 'cos I can't remember the rest of the team doing much apart from thier goalie. Alas 'so sad' (EBB quote)

Anyways, as they say in Space Patrol "Gamma Rays on, Yobba Rays on, I think I'll have another sausage Captain"

Correct Marco. Bianchi have lost out some where in the past year or so.
Hi Angela - Night Hogs eh? Don't have Hogmares. Thanks as always for your kindness.
We wait for a clean Giro and TDF winner Jerry. It will be fabulous.
Yo Ramblin' - only a very warped mind could envisage Tricycle racing down the Pyrenees. How about up Ventoux ? Meanwhile I will go out with you for a ride but if you drop me I'll chant In Demons In outside your house, from the back of a lorry at 3.45am precisely on the following morning.
x

Da Luca saved his arse today in the mountains. He should be ok in the time trial tomorrow. Keep them wheels a turnin' donta ask him how is feelin'.

The Ventoux is perfect!
A personal 'Demoning' for dropping you? I'll plug in a 4 way extension lead and leave it outside the house then! Hmmnn, steel against carbon fibre? I'll drop you on the downhill. By the by, Roger A is doing a Trike race at the Tour start. He's also one of the new 'cycling proficiency trainers' or whatever they're calling them, reckons the dosh is the best he's ever earned. Fancy watching a bit of the 2nd day from the roadside?
This years TDF will be the weirdest ever methinks. Millar for the time trial? I doubt it somehow.
ramblin x