is any one there? 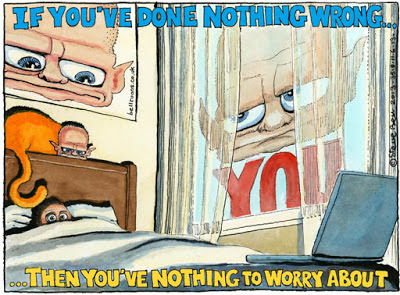 acknowledgements to the guardian newspaper

Like Mary and Bob, I was a bit surprised by the lack of comment re my last post on PRISM the UK/USA GOVERNMENT SNOOPING program. (Is any one there?) I have removed the recently added anti spam sign-in procedure in case it was too much trouble for any one thinking of leaving a comment.

Meanwhile....... perhaps it is really high time we all revised our thinking on spending priorities from the top down and took a long hard look at the real cost of austerity cuts. The national deficit remains exactly where it was at the start of the ConDem dynasty. This a truth they refute while the latest reports by independent experts maintain it is the case. It is increasingly clear that the most vulnerable people in these lands are the ones paying the highest price and suffering the most as public services crumble and morale among their workers goes through the floor.

A young school girl is suicidal. After assessment she is returned to school where her teacher identifies there is still a problem. She is held overnight in a police station where she says "police officers looked after me really well" for forty eight hours but "it was a frightening experience" and she says "I felt like a prisoner". There was no other accommodation available. Places of safety are disappearing along with Social Service staff and other relevant workers and agencies because of Government cuts. A Shelter worker told me their available drop-in time for homeless young people in London, has been halved......

A man on TV is thrashing a car around a race circuit. He is learning about drifting, a new style of motor racing. During the experts demo for the novice, a tyre was shredded by the constant skidding and drifting at every camera loving corner. The fifteen minute session cost three hundred and fifty quid in rubber. By the time the newbie had finished his training, then participated in a competitive race , the combined cost of every drivers burnt rubber must have been in the thousands......

It has been suggested that if the budget clothes retailers put an extra two pence on a T- shirt then the wages of the clothing workers in Bangledesh could be doubled.

I'm off to Lincolnshire for what promises to be a lovely little gig at THE FUNNY AS FOLK FESTIVAL in Cabourne next saturday. I hope the weather is fair.
http://funnyasfolk.co.uk

From time to time I might post a little piece on here about my summer travels and may be  a photo or two but, I won't be posting much for a while.

crow sits waiting in an oak tree
which gonna live longer than me?
who gonna say the winds blow
which way?


peace
Posted by edgar broughton at 04:52

I am also always here :)

I personally think that anarchism is fast approaching. Maybe the 2010's are like the new 1960's? Everyone's starting to realize how black and white our society is, and most people are starting to get fed up.

I read this with tears in my eyes. I have 2 granddaughters aged 8 & 15. I hope their skin is thick enough to take the bullies for what they really are. As you know I was bullied by an NHS manager & have gone to great lenghts to make sure the girls do not suffer like I did.

Love to you & Loz