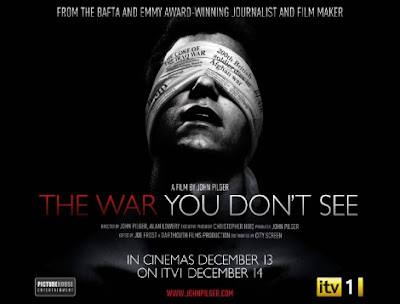 Thanks to all who turned up in the CHAT BOX on Saturday 9th December.It was a lively chat and fun. I think we might give it another blast some time next month. Watch out for details. Would you like to suggest a topic in advance or shall we just leave it open?
The comments of THE FIRST SUPPER were a bit lively also. It seems the current unrest in the UK has focused some very strong views among First Supperists related to the looming cuts and the inevitable political unrest. Remember - United we stand divided ... well you know the rest.

I would like to draw your attention to the following message sent by John Pilger, political journalist, to the students. I don’t suppose he is a stranger to most of you. Did you see his film - The war you don’t see on ITV the other night? I met the great man many years ago on Clapham common and we had a short chat. This was a huge “fan moment” for me as John is one of my all time heroes. Any way this is what he had to say.
“Your action, and the action of your fellow students all over Britain, in standing up to a mendacious, undemocratic government is one of the most important and exciting developments in my recent lifetime. People often look back to the 1960s with nostalgia – but the point about the Sixties is that it took the establishment by surprise. And that's what you have done. Your admirable, clever, courageous actions have shocked and frightened a corrupt political class – coalition and Labour – because they know you have the support of the majority of the British people. It is you, the students on the streets – not the Camerons, Cleggs and Milibands – who are the authentic representatives of the people. Keep going. We need you. All power to you”.
John Pilger 02 December 2010
http://www.johnpilger.com/

On this note I am going to leave the student fees issue for a while, until the next demo, with a quote from Mahatma Ghandi.
"Live as if you were to die tomorrow. Learn as if you were to live forever." - Gandhi.

Competition time.
I need a little bit of help with a task that always does my brain in and this it.
I would like people to email me with a suggested set list for my Fair days pay for a fair days work tour.
Please send a list of ten songs that you think will be suitable for my acoustic set to ebbman@btinternet.com  or - as comments on this post. I will publish the list I like best on here on the blog. The sender will receive a signed copy of the ONE cd plus a little surprise gift.
A single called Feel me by your side from Luke and myself will be released before Christmas on the EB website and, if we finish the video in time, also on Youtube. Well that is about it for now. Gotta keep digging my anti Christmas bunker against the commercial torrent. I know “ bah humbug etc, etc”.

Posted by edgar broughton at 22:29

When you dig your anti christmas bunker Edgar, let me know I will meet you there! I travelled home from work today after a heavy snow fall. The roads were gridlocked and the temperature dipped to -5. The buss could not get all the way so I had to walk and I can honestly say I do not think I have ever been that cold in my life. I know I have gone on about the homeless but I could not help thinking about them. I felt ill when I reached home but knew there was a bowl of hot soup waiting for me and central heating. I have been homeless before many years ago and was forced out on the streets some of the time but I don't remember it being this cold. I was lucky I found my way back but I fear if this cold snap continues as forecast some on the streets may not survive not to mention all the pensioners who cannot afford to put their heating on.

John Pilger - TOP MAN!
Can I come in the bunker too?
Maggie ( not Thatcher lol)

Looking forward to the new song Edgar.I saw the John Pilger film on ITV. I wonder where we might be with out people like him.
James

Speak down wires
Poppy
Ice on fire
Red Star ( oh yes)
Green lights
Say you love me
Aerial
White horses
Hotel Room
For Dr Spock
Can we have more than one stab at it please?

Green Lights
Homes fot for heroes
Double Agent
Speak down the wires
Six white horses (K's fav)
All I wanna be
April in England
Poppy
Get out of bed/there's nobody there/side by side
EOR
Not a bad list that one eh ?

I remember Pilgers documentary about Cambodia. I think it was called Year Zero. We wouldn't know much about the extent of such events with out the kind of dedication to the truth that John Pilger strives for. No surprise then that he supports the students. By the way I totally agree that we should get behind any movement that opposes these very devisive and dangerous cuts.
The film The War You Don't See is a masterpiece and every bit as important as any thing he has made previously.
Keep it going. I always feel when I come here I am among friends.
Best to all.
Mac

I have removed the previous comment. I don't allow people to leave URL s for their own blog, especially when it has no content. I don't allow spam either.
Meanwhile thanks for all of the SET LIST suggestions for the FDPFAFDW tour. Keep them coming by email or on here.

ive thought about this for a while, the songs i would like to hear is the album Oora the whole album in its entirety!
being a non musician i dont know if this could be done as a solo gig or not,
on the other hand i saw your set at MJ's memorial gig and it was for me stunning, its was very different as to what ive seen before and your voice is a instrument on its own,
so my greedy idea for me being purely selfish would be two sets, 1 OOra followed by a break drinks /food chat stories , then a set either like MJ's incorperating a few well known numbers intertwined with new songs !
or just come down meet my friends eat drink chat tell stories and play what you want, its going to be the highlight of my year any
way!

a peacefull time to you ,your family, friends, and fans

What DID you perform at the memorial gig Rob ?
So many writes about how great it was....

Hey Jarle
Yes! that is a good list.
Tony thank you for the very kind comments and your suggestions for the two set soiree are completely nuts but fabulous. I am sure it will be fabulous what ever.
Jarle I have just finished a session with Luke who sends his love. Been working on the EB Christmas song.
Regarding the memorial gig for the lovely Taffs in Wales, I don't remember half of what I played but I started with what I call my Arabesque intro, Speak Down Wires, Green Lights, Six White Horses, Ice On Fire, Prophecy, Soldiers Of The Light and Red Star and lots and lots of improvisation and yoiking.
LUV2ALL

No one advertises on my blog. If you do I'll delete you.