I thought my mate Ramblin’ was off work last week so I mentioned we might go out some where taking a few snaps or something as long as the some thing was not on a bike. Am I out of condition or what? Still a few hours on the turbo trainer spinning low gears on the bike will soon sort that before the next EB Band gigs in April.
Any way I went to visit Ramblin on Friday and we resolved to head out some where on the Saturday ( yesterday). Ramblin’ needed some bib tights and a jacket for bike riding. He wanted to go to the main warehouse of a well known cycle supplier to get them and their place was on the way to the Sussex Downs and beyond. We like it down that way. After lunch I got a call from Ramblin’ saying he was off on his mission and did I fancy the trip? I was so relieved it wasn’t 8 in the am that I eagerly accepted and after a trawl through the traffic and the bleak environs of the London hinterland, going south, we arrived at the cycle store. Ramblin’ chose his gear and we set off to catch a few pics of the very imminent sunset. Being a practical man Ramblin' headed for the nearest hill and we gawped at the dipping sun and the far off sky line while we snapped away with a our cameras. 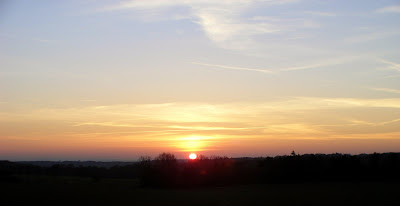 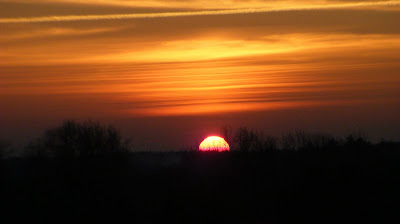 The sun dipped out of sight and we headed down to Brighton. ramblin' has a new motor and it it flys. It would make a perfect band car. Fast reliable and steady as a rock. Ramblin’ was well pleased with his toy as he put it through it’s paces down the lanes and down the motorway to the coast. 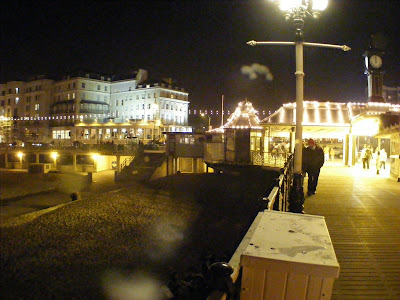 The whole trip was a buzz. Any one who knows me knows that I love to burn down a road in the darkness especially if it’s in the direction of any sea shore but that wasn’t the high light.
Ramblin’ has been my best mate for years going back to when his son and mine we were very small. It’s fairly easy to begin to take people for granted but I value his friendship as high as any and a lot more than most. Ramblin’ is one of the most serious and seriously amusing, eccentric people I have met and always good company. We have similiar politics, common interests including a love of a wide range of music. On the car stereo we listened to Dave Brubeck, Scratch Lee Perry, Golden Earring ( I know ), some weird trance beats, some strange wonderful Afro / Latin Christmas song and a host of other audio delights. This was all on a CD Ramblin' put together for a Christmas party at his place of work. I can imagine the reaction of those attending ranging from astounded to delighted. 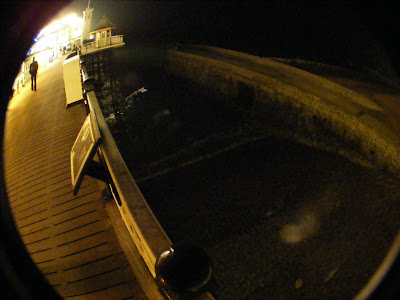 I really enjoyed my afternoon out and evening by the sea at Brighton. Last time we did the trip to Brighton by car I had not long emerged from hospital after a heart attack. Ramblin correctly decided I should get out and about. It was just before Christmas, there was snow on the ground as we set out for ramblin's annual Christmas shopping in the famous Brighton Lanes. We had some fun sliding around on the snow on country roads taking the scenic route in Ramblin’s old Astra. Ramblin's idea of cardio rehab. Aaaargh!

Times change, cars change and towns change. Brighton is not what it used to be. What UK seaside town is? A gentle decline persists. People change also but true friendship endures. Thanks for the ride mate.

ps - Almost forgot. I left a comment on last post announcing JJ as the comp winner. Shop in the Charity shop - win , win. Send me your details by email JJ and I'll send you the goodies.

Posted by edgar broughton at 01:51

Brighton's not what is was since I moved along the coast to Shoreham !
Still, at least you didn't get arrested this time, Rob.
Life's about those enjoyable times,a mate, a sunset, a pair of cowboy boots!

Maybe it is more true as I get older but there is so much pleasure in the simple things in life. Enjoying the company of good mates being one the greatest. Maybe a late contribution for the credit crunch competition.

How nice! Simple pleasures indeed. Often the best. All the best to you Rob
Angela
X

howdy pardners! yup the older i get the more of jest simple things i enjoy ,
sitting out in the garden in summer
walking
reading
taking the dawg for a walk
good music(EBB Bluegrass the band and many more)
this year my friend Nick and i are going to do some walks in the Derbyshire dales..ahh the simple but priceless things makes me glad im older!

The nicest thing about getting old is that I don't need illegal drugs any more. I can get the same effect just by standing up quickly!

Tomorrow my friend Nick and me are going down to London to see Malcolm morley (ex Man Help yourself) at the plough walthhamstow, i WILL be wearing my new cowboy shirt but Not the boots this time (gotta build up the nerve!) We will chat listen to good music on car cd and hopefully have a great time ...its nice to be with friends
cheers
tony