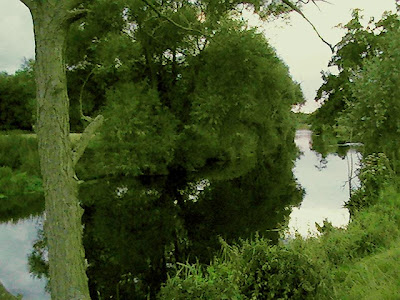 My head is filled with the scent and flavour of this strange summer. With changing skies filled with rain then burning bright. What to wear ? Where to go? Rain bows and weather broken holidays in England. Tough in a tent with kids. Mean while Olympians strut their stuff in what seems an un real land in television world. One world – one dream and presumably one voice? Not if it says NO to barbarism and subjugation. The pleas for fair play and for no doping from the head man in the I.O.C, at the beginning of the show, seem insignificant compared to the pleas of the Tibetans for freedom of choice. But we must put all politics aside to get this I.O.C. opium for the masses. We must join with Bush with his jacket off in the crowd of torturers and bandits. He fits in well. This version of the massively intoxicating spectacle that will make us forget what is real and that which hurts us most is addictive. We will want more and more of it as is our wont.
Under an iron bridge there is a bed of lily pads with just one saffron flower. Olive shade turns golden in the intermittent sun-bursts. A cool breeze is blowing across the face of the slow flowing river, rolling through the flat land scape towards the nearby coast. Estuarine flocks of birds gather in the storm clouds overhead. Silver and white, they hover and dart in the electric greening. The changing light shimmers across the bending reeds. It is enchanting. Dragon flies skim the surface of the waters skin joined in airborne mating. They pause for a fleeting second or two to rest on a bulrush or reed. Life for them is rushing by and is always almost over. It is good here under weeping willows and silver birch. Far from the subterfuge and the entreaties of faces on the screen demanding we join in. I am quiet and happy. I am content and safe even though I know the madness of the world is only a text or phone call away.
A smiling bearded man gets off a plane in the UK still protesting his innocence. No one believes him. I know a man who taught him to sail and wishes they had never met. I met his fellow musical travellers who had hardly a good word to say about him. I know some mothers and youth workers who walked out of a works Christmas bash because the DJ played one of his records and couldn’t see why any one might be offended. I hope that the DJ knows better now.
Gordon Brown looked almost animated and very nearly passionate as he met with the UK Olympic team in Bejing. There is little else for him to be cheered about. If only he could apply the same thinking and implementation of the people responsible for the British Cycling team to the running of the NHS and Social Services to name just two. What you do Gordon is give the experts the budget they need and leave them to it. To be fair it is true that New Labour have done some things right. Police have brand new guide lines for dealing with rape victims which are considered by other professionals working in this area to be a real improvement. How ever new plans to turn Social Services into call centres in the next year or so will mean huge cuts in an already desperately under funded service. If this is implemented there will be an exodus of the best workers. Many vulnerable people will become isolated and unsupported.
In the distance I hear the throb of an air sea rescue helicopter heading to the sea. It reminds me of the almost nightly sorties flown by the police over my home. They are always accompanied by the sound of multiple sirens on the ground.
A large fish jumps in the gathering dusk and plops back into the depths sending ripples across the water in perfect circles. The wind has dropped. All is quiet and as we wend our way back to the ribbon road a new tune is running around my head.

Competion result. I like two entries and so the competition winners are

“One for all and all for ONE ”. From macedonut and
“You think I’m up. I’m down. You think it’s fair, you wanna share?” from Phil Robb.
Nice one folks. I guess I made it hard by ruling out the funnies but it was interesting. So guys send me your postal address by e-mail and I’ll send you the discs.

Finally this is interesting and comes via our good friend Jonathon Ashby https://secure.avaaz.org/en/report_back_2?cl=120258307&v=2063

Posted by edgar broughton at 20:29

Yeah the olympic drug is just that and lets get back to reality asap. Hurt the despots.

Interesting flow to this. You have a way with words. Did ya catch any big un's? personally we are glad the Big O is over. A lot of fire works and bullshit except for the actual events. Chris Hoy is the real Mcoy.

meanwhile, robber brown (yep, I still got those 10p tax loser blues) has been to see queenie to discuss the arrangements for a state funeral for Thatcher when she finally expires!! I kid you not.

Well well, if such an obscene event ever takes place lets make sure we spoil the party and turn it into the most embarassing debacle ever (and all in front of the worlds multi media, tee hee)

What say yers Broughton bros' and sisters? Lets make sure that old demon goes out with a 'good' send off huh?

you may be amused to know that after attending various folk festivals this summer and sometimes wearing my EBB T-shirt, I've had a fair few 'interesting conversations' with several wild-eyed chaps of a certain age (and it is always chaps so far) who, to a man, begin talking by saying; "I thought he'd died years ago"!!

I once put a lonely hearts ad in the 'indo' which just said "middle aged bloke seeks female edgar broughton band fan". (I was going thru an odd phase at the time). Amazingly, I got one reply...and she proved to be a smashing lass indeed!

Mel and Bandit are right in my opinion. The Olympics are fine in terms of the actual events it is the nationalistic hypocrasy and minimising crucial issues that I hate. In a country whose growth rate is hugely due to counterfeiting western products the Chinese Govt banned all fake official Olympic merchandise on penalty of imprisonment for offenders.

Paul Gadd is a sad but very dangerous man and should be hounded if it will stop a child being hurt. Harsh I know but who cares?

Hi Timo
It comes to some thing when the idea of disrupting a state funeral seems appealing. We have all seen the erosion / destruction of basic freedoms pertaining to our democratic rights ( the last of the ways in which we could impact on what happens to us ) and the arrogant vandalism of dangerous politicians who have chosen to ignore us for too long. Do they think we have too much to lose and we won't risk jeopardising "our stuff" in any major meaningful act of civil disobedience? Are they right?

By the way almost all female Edgar Broughton Band fans are lovely lasses. Oddly enough two of the scariest female fans I ever met were / are both Norwegian which just goes to show something but I don't have the foggiest what ..............

Well I'm all for a bit of anarchy but let's not disrupt Thatcher's funeral - the sooner she's in the ground the better, why hold it up ?
Carol Thatcher was in the paper last week saying that her mother's mind was going and she needed to be reminded time and again that her husband had died. This is sad, even tho it's Thatcher - but I was wondering if she had to be constantly reminded that she ruined the country and that her son is a twat ! Just a thought !

P.S. Regarding the Paul Gadd saga - I have always taught my children that all that Glitters is not gold.

Re Your last comment. Nice one Shoreham. Well said.

I found your Glitter joke extremely offensive so I have removed your comment. I don't expect to find material like that on my blog.
There is nothing funny about paedophilia, EVER !!!
Edgar Broughton