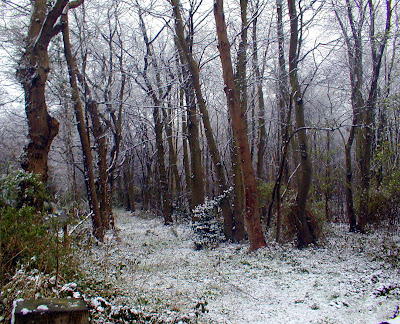 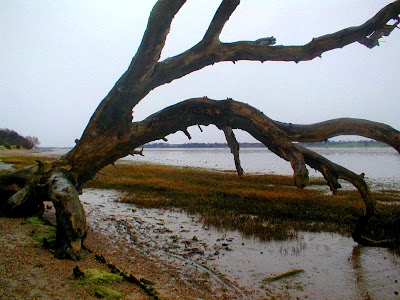 Low tide on the river Orwell 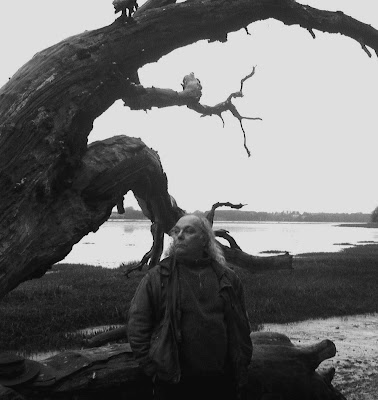 This is my kind of place. It is a tidal, inland stretch of a large river. The estuarine shore is cold and damp at this time of year but full of atmosphere and interesting things to look at such as the fallen tree. I plan to fish for bass here some time soon.

During the the1980 Olympic Games which were held in Moscow, the USA boycotted the games because of the Soviet invasion of Afghanistan. The Olympic Committee decided to award the games to Bejing in spite of the growing world opinion against the Chinese occupation of Tibet. Currently in Tibet torture is a common practise. Forced sterilisations of women who cannot pay fines imposed for having more than one child, are a common occurrence. The procedure is primitive and the “patient” has to pay for any medical needs the day after the procedure. Women are some times left severely disabled by this barbaric practise. Thousands of Tibetan people have been imprisoned in forced labour camps. Many have died in what has been described as systematic process of genocide. The freedoms of the Tibetan people, both cultural and religious, have been severely curtailed. Still they remain constant to what the Dalai Lama calls “ The middle way” in the hope that reason might prevail through peaceful negotiation and intervention by the larger world community. Sadly this has not been forthcoming so far.
I expect and hope the recent problems around the Olympic torch parades is only the beginning of a growing world wide movement against Chinese human rights violation both at home and abroad. Asda is currently selling a Chinese made DVD player for £22. What is the real cost?
This guy is waiting to hear from YOU - defence_chn@yahoo.co.uk
and so is this guy - culturaloffice@chinese-embassy.org.uk.

As a life long and recently disillusioned cycling fan it was wonderful to see the gold medals pile up for the UK track cycling riders in the recent world championships. Quality racing and all drug free? It is highly likely that the whole British squad is clean. It will be interesting to see if the 2008 Tour De France can resurrect itself from the gutter as far as performance enhancing drugs is concerned. Either way it is time to pump up the tyres on my beloved Bianchi and hit the roads, especially all the flat ones for a while.

I get some strange correspondence, mostly by email these days and here is a short sample from an old friend of the band who used to live in Leamington Spa and now lives in Germany. Bob is also a musician. We go back to the earliest days of the EBB in Warwick and Leamington Spa but only really got back in touch after the EBB re-formed. http://www.bob-poole.com/

I am asleep in the bedroom. The kids are sleeping next door. She is out again somewhere, not sure who with. The radio is playing softly in the hall. The Dubliners are singing "evening over rooftops" with sweet 4 part harmonies. Suddenly the song has a strong connection to Ireland and Irish inner city problems. I get out of bed and walk into the hall. I fumble with the loose CD's there looking for the Edgar Broughton version of the song as I need to hear it again. There are plans ahead to protest and lobby the government to fix a big problem with Derby's river where it runs through a deep gorge. A newspaper catches my eye with a photo of a man playing the piano under water and how it is feared that he has drowned.
Hey Rob, check the time of this email. It is 6.30 in the morning and I just woke up remembering this dream. The thing is, this kind of thing never happens to me and I am not drinking or smoking or anything. I have never felt more normal and everything is fine with the world so why the devil do I wake to a crazy dream involving your song so strongly?
I must sound like Digger! (Another old friend from the early days)
Hope you are all well.
Best wishes
Bob Poole
-----------------------------------------------------------
You do sound like Digger ha ha ! AND this is the kind of thing that happens when you become at all involved with the EBB. At least your dreams seem quite innocent and not too dark. It could be worse mate. I hardly ever dream these days. I just fall into a deep comatose like slumber - eventually.

The most worrying thing is that you say you "never felt more normal". Oh dear Bob this could be very serious.
Lovely to hear from you.
Best wishes
Rob

Been thinking. I did give up cigarettes. That could do it.

When are you coming over here again? Your new fans have been asking. Especially the girl with the long blonde hair.
Never happens tome anymore. Girls used to fancy me once!
Best wishes
Bob Poole 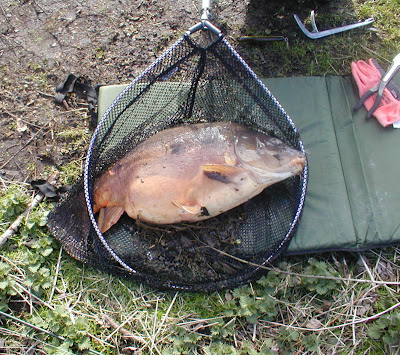 Spring is almost here and the fish are spawning. I have heard that it is possible to catch a carp on a lure at this time of year though I don't know any one who has done so. While fishing for pike with lures on a favourite lake, I caught the specimen pictured above. I knew it wasn’t a pike as soon as it took off but was shocked to land a carp. Beneath the surface of any fish holding fresh water a war of attrition is waged by the predatory species at this time of year. Carp will eat small fry where as most other times of the year they are not predatory. During the day light hours and the first hour or so of dusk whole sale carnage is usual. Happily it mistook my lure for a real fish. You can judge the size by comparing my glove and tools in the pic. The fish was quickly returned to the water unharmed after a swift photo or two. I will always remember that catch and it was on the last day of the fishing season. Amazing!

Posted by edgar broughton at 00:59

It's hard to know which side of the fence I'm on regarding the Olympic Games being held in China.
I disagreed with the USA boycott of 1980 as it was based, I felt, on political oneupmanship - how ironic it is that now America are the invaders of Afghanistan along with ourselves, of course.
I have visited mainland China and, unsurprisingly, found the people warm and welcoming. As always, the population do not reflect their governments thinking and actions.
The Tibet issue has been under reported for many years and if by awarding the Olympics to China, this issue can be brought into the public eye, then it was a good decision. However, my cynicism tells me that China was awarded the Games in order to further trade links - just think of all those cheap goods !! What's a bit of torture when you can buy a DVD for £22 ?
The question is, how best does the 'civilised' world pressure countries with poor human rights into changing their ways? Is it by trade sanctions which inevitably leaves their people without basics such as medicines as in Zimbabwe, or by bombing the shit out of them as in...well every country to have fallen out with the Americans over the last 60 years, or is it by gradual encouragement, the carrot and stick ? Whilst 'ordinary people' can debate this,world leaders couldn't give a flying f**k about human rights - oil is their god. What is being done about Burma or Nigeria, for example? These countries have terrible human rights records and their governments are being supported by US oil companies happy to do business even with the Burmese military junta despite the the results of an election, the outcome of which led to the house arrest of the winning opposition leader, Aung San Suu Kyi.
There is an unacceptable level of hypocracy in the air.
The politics of greed will no doubt win out in the end, as always.
In the meantime - should London host the 2012 Games while we occupy Iraq ? Or should we hand Northern Ireland back to the Irish first? Should we ban USA from competing unless they abolish capital punishment and close down Guantanamo Bay?
Maybe I should be careful what I say as I could be imprisoned for 42days without trial while the authorities 'build' a case against me !
Keep outing those demons, they're as big and as bad as ever !

I'm in agreement with your comments regarding the hypocracy of the situation.The recent despatches programme on going undercover in Tibet was an eye opener.And it's appalling what's going on,as of course in many other places around the globe where people have no voice and life is as valueless as dog shit.We don't even have peace in our own back yard do we?But we do have a voice and we have to use it in whatever way we can to help if we are at all able.Remember,no snowflake in an avalance ever feels responsible!
Ade.

Great to see the people more or less united in some thing namely, a more or less world wide opposition the plight of the Tibetans and Chinese involvement in Darfur. We mistn't forget to mention the years of oppression and virtual enslavery of there own people.

Great home page. get behind some thing good. join in and expand the positive pool . good to see you aint given in
xxxx

Free Tibet, Free the Chinese people! (see!, I can precis!)

I can only concur with Rob and all above, and I guess 'trade links' says it all as regards those that wield the most power.
It's about time (I live in the UK) that we were able to vote for what we don't want regarding what the various political parties dish up for the choosing come election day. And it's long overdue that the reasons half the population don't vote were taken into account somehow.
We also need to be able to force public votes on human rights issues that are binding to the government of the day (I'd hate to be the person that had the job of drafting that one up LOL!)

You've educated me Rob (and you know what I think about fishing, as I'm a vegetable) I thought Carp were unterritorial, and thus not predatory. I did keep a Goldfish I won at a fair for 14 years (a liberation thang!) - remember Rabbit?

OK, How do you tell a male Carp from a female?

You are right in everything you've said, but its increasingly difficult to buy anything which hasnt been manufactured either completely or in part in China... Anyone with a recent LCD TV, Computer, iPod in fact anything electrical, its no coincidence the prices of these things has fallen so quickly... they all come from China...
There must be a solution.. lead on

Boycott the Olympic games in Beijing? Forget it. The IOC is corrupt - and so are our consumers in shops, supermarkets, electronic stores, clothing stores. They don't care about moral and ethic rules as long as they can buy it cheap. Or do they care about our own jobs when they are "exported" to low salary-countries? Why do we fight for strict ecological laws for our agricultural products while buying strawberries freshly flown in from Peru? And the stylish dress woven of 100% cotton - who aks for the burnt hands of the fieldpicker somewhere in India because this cotton was treated with pesticides? These consumers want some TV-entertainmend in August - live from Beijing. Will they care for oppressed Tibetians?
40 years since 1968: It seems history is repeating itself again. Due to oblivion.
Oetzi

Great pics as usual Rob. The art is mainly in the composition but what camera do you use?