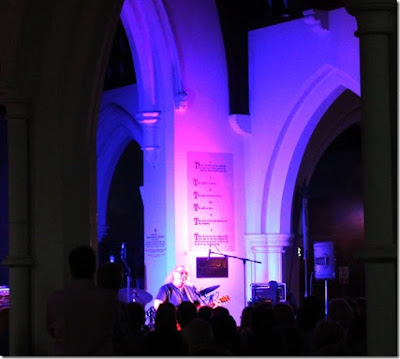 I think I have found my current favourite gig and it stands high among the truly great venues I have played. St John's church in Farncombe is a working, living church and well loved judging by its condition both inside and outside.  We arrived in good time for a sound check. The sun had been punishing in the south for days and only now did a little rain begin to fall from the leaden skies promising some cool relief from the grinding heat. This was another support gig for Focus who I am really warming to, both as performers and people.

As soon as we entered the church it felt very welcoming and it was obvious that the assembled crew and helpers were well used to putting on gigs here. Julian, the promoter has been putting on shows here for 11 years which amounts to over 200 shows.  That says a lot for the church and relationship between the organisers, church and community. There was absolutely nothing wrong with this gig. Everything was well honed and my sound check took little time at all. I was very happy. As soon as the sound check was finished it was outside in the cool air in the midst of a soft cool shower. Getting a little damp was a pleasure. The high temperature began to slowly drop a little and I think all in attendance were thankful.

The dressing room was the vestry in the church and was filled with the trappings and garments of the clergy. This was an indication of the kinds of acts playing at St John's and the respect and trust shown by all to all. I must admit I have come across a few acts who might not have shown the same respect in such an environment. Perhaps I am being a little harsh. No I am not. I have just thought of one hooligan band I would be reluctant to share any space with. 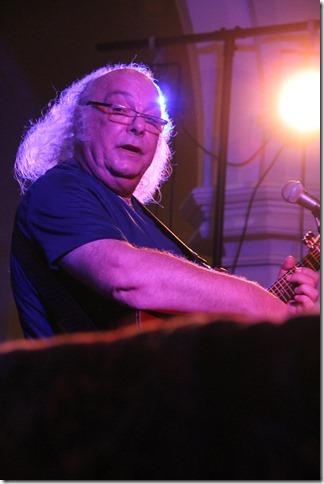 The church soon filled and what a delightful audience they were. There were a few of my fans there and a few more who might have heard something of me but I soon realised most had not seen me before. This always presents something of a challenge but one that I embrace. It is a good opportunity to test new songs as well as the few old songs I still play.
The sound in the church was simply perfect and I revelled in it. Everything sounded so clear and the natural reverberations in the building were exquisite. I played for 45 minutes and I think my only error was not playing The Sound Don't Come. The audience was so nice to me and I left the stage buzzing all over. Job done. 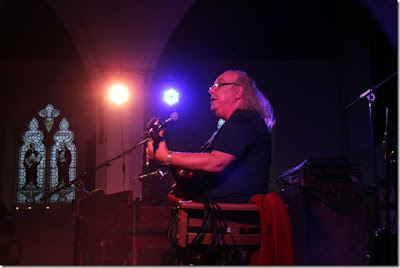 Focus soon followed and they were on really good form. The crowd loved it and I could see why. Actually they are a class act and better than all the other prog acts I have supported in the past few years. Most of them are like pale cover bands of themselves and one band I played with last year was just an hilarious parody of better days.

So time to hit the road and back to London with Ramblin' at the wheel. It rained some more but as we entered London it was clear no rain had fallen and another boiling humid night was coming.

I really enjoyed this gig so much. It doesn't get any better and if you ever get the chance to get out to Farncombe for a show don't pass it up.

Since the gig I have been mostly recording and trying to keep cool. The recording is going well but I get blocks every so often and lose faith in things. It doesn't last. I know it is part of the process, for me,  so I quickly get back in the stream of things. I'm off to Norway at the end of the week for a few days and the from there to Switzerland for a couple of days. I must admit I am starting to look forward to everything these days. I don't want to miss anything.

Thanks to Dave for looking after me and for the photos.

I too have experienced a small number of gigs in churches and the sound has always been pretty good.I have seen local bands, religious groups and once, Steeleye Span at a gig during the Broadstairs folk week. For anyone interested, this year's folk week starts on Saturday. I hope that you get more opportunities to play these old buildings

It looks as though this weather is going to break soon and hopefully bless us with less humid and more reasonable temperatures.We have had a good run.

I am looking forward to hearing your new songs and perhaps reading that novel you spoke of in earlier posts.

All the best
Keith