The first thing you might notice when arriving in Sweden is the absence of litter. Every where is clean and fresh. I arrived at Stockholm airport in the late evening and was met by Johan Ahlen and Alf Thelin. My baggage and guitar arrived safely so now I could relax and get to know my hosts. i asked how long the journey was and was told 20 miles. But they were Swedish miles ( mil ), and 1 swedish mile is the equivalent of about 10 kilometres. Many miles later a young deer crossed the forest road and we ran over it killing it instantly. There was no way to avoid it. Johan who drove us said it was the first time he had hit a deer though it happened frequently in this part of the world. We were all very glad that it was not a moose. They are very much bigger. The law in Sweden stipulates that when a deer is killed the police have to be called and the place, where the deer has been moved off the road, must be marked with a paper bag or similar. The police have a list of local hunters and one is sent to collect the deer.

After a short pit stop in a Burger King, where I had a delicious blue berry shake, we set off and eventually arrived in Smedjebacken, our destination. The conversation flowed over a wide range of topics as we began to get to know each other. I am still astonished at the level of english spoken by the Scandinavian peoples.
I was soon settled in The Barkens Konferens Hotel situated beside a lake in the forest. 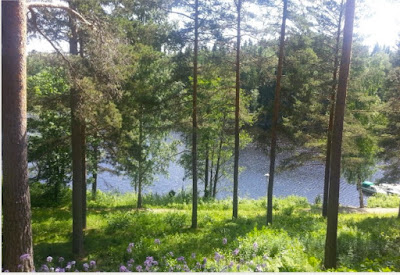 the view from my hotel room

Once again a fishing rod and tackle was missing from my luggage but there is a good reason for that. In a land filled with water I would be the rudest guest with a rod in hand. No one would ever see me except for when it was time to play. Any one driving me would soon get irritated by my constant calls to stop by water, large or small, to cast a lure one more time.

The next day, Thursday, was a day with out a gig so Johan and Alf took me to see the Hagstrom museum in Dalarnas. It houses a wonderful, vintage collection of the world famous hagstrom guitars. 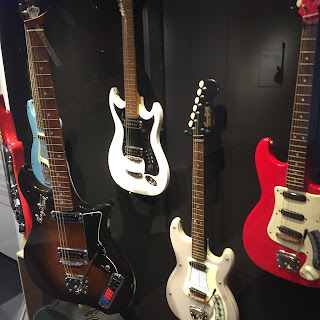 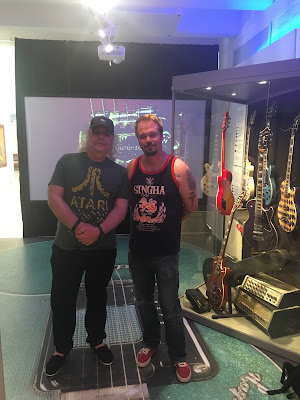 Like Charlie Watkins of WEM fame they used to make accordians, hence the marbled or glitter plastic finishes on the very early models. When they begin making guitars in the fifties they utilised stocks of the accordion finishing materials to cover the guitars. I saw a tape echo that resembled Charlie Watkins copycat. Charlie gave me several of his units and I loved them. The tapes became unstable after a while but back in the day before digital delay units they seemed wonderful. 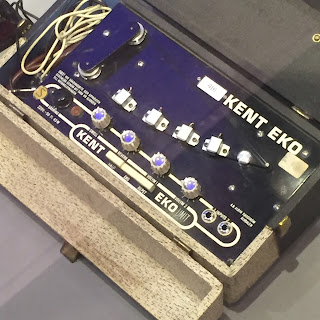 We left the museum and I now had a desire to own one of the accordion finished guitars. So elegant and splendidly innovative though I fear the modern price would be prohibitive. Looking at many of the splendid early models it occurred to me that some of them were forerunners of later famous makes and not derivative.

Johan drove us out into the forest with a few stops and places of interest that included an ancient grave yard and a sapphire blue pool in an old mining site. Eventually we arrived at Johan's summer house. isolated, in the wood, peaceful and perfect. The sun was shining and the silence was magnificent in it's completeness. The summer house has no electricity but some how I don't think it would be an issue when immersing yourself in nature and good clean air for a while. An idyllic place away from the bustle of modern life where one can gather thoughts and simply - stop. It was wonderful to sit in the forest garden,  in the sun with a cold drink and good company. 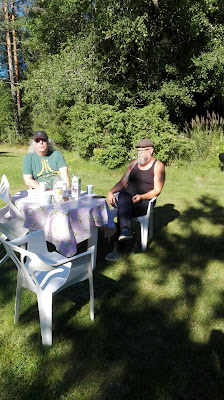 Johan and your's truly at his forest retreat

On the way back we stopped off at Alf's home where I met Linn, Alf's partner and their two boys described by Alf as Vilde(the Big one) and Malte(the one that isnt that Big. Lovely kids. I also met Alf's dad Råghe. ( below ) 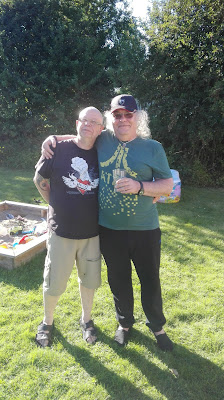 The next day was Alf's birthday. Later when Johan and I arrived at the gig, a splendid old grain store house full of character and the good vibes of many generations I was sure the sound would be good . The building had two floors. On the ground floor tables were laid and food supplied by Alf's step dad looked utterly amazing. A fine potato salad laced with a little chilli, two kinds of smoked meats and a salmon he had smoked himself. A fine salad topped it off. What a splendid feast we all enjoyed. Alf opened his presents and we all moved upstairs to the floor where Johan had set up a small pa and guitar amp for me. We had sound checked the gear earlier in the evening and the sound in this lovely old wooden building was superb. 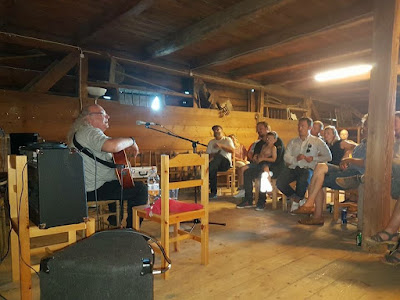 I ran through my songs, told my stories and was very warmly received. I love playing for the people of Scandinavia. They listen. They want to understand and so they do. They laugh in the right places and they get the sentiments and message. Also, it is not surprising to me that we have more or less the same political views.

Most of the people at the party knew the music of the EBB and I am always a little concerned that the new songs might be too far off what they know and like.  I needn't have worried many people told me they had enjoyed seeing and hearing where the old stuff had lead to and that it was a good progression. I love it when it seems that I have touched people with my songs. Then I am just a little proud. It is always exciting for me to get good critique, especially when it comes from the young. So, when I get good feedback, all doubt fades and it is at these times that I don't have to wonder about the validity of doing what I am doing right here, right now. I thoroughly enjoyed playing for Alf's birthday and meeting his family and friends.

Next day we assembled at Johan's house and headed out for a meal at a beautiful old waterside restaurant. The entire building was like a museum, filled with all kinds of old, interesting art and every day utility items from the past. The garden was bathed in hot sunshine and very cold drinks were the order of the day. The food was delicious.
We headed back to Johan's house where the sound equipment was ready and waiting. Soon after guests began to arrive. During this time I rehearsed in the house, going over songs I had not played for some time. It was nice sitting by myself in the cool house and I got through a lot of work. The time flew by, as it appears to do these days, and soon it was time to perform. I was looking forward to it all and felt rested and prepared. 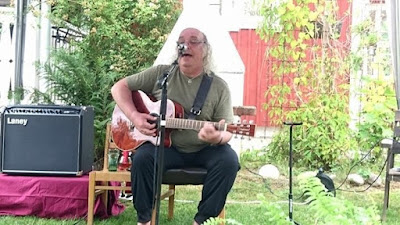 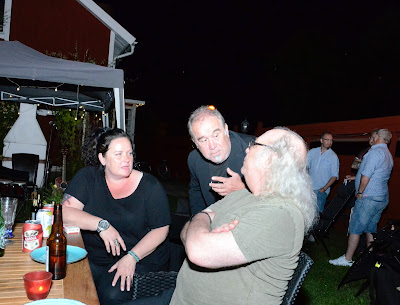 I soon discovered it was a special audience that turned up for the gig in the garden, as it was for the previous evening. I some how felt it would be good and for me it was as good as it gets. My rehearsal had worked wonders and I was very relaxed when I began. I played half of the songs before taking a break then I returned to my seat for a few more and really enjoyed the second set. Afterwards people commented on the journey from EBB to EB and how it had worked. Again I knew I had reached them by the comments I got by way of feedback. The sound in the garden was special. Even better than the wonderful old wooden building where I had already played. The reverb on my voice rang around the trees , bouncing back full of the world. I enjoyed myself so much. I only played a few old songs and actually with the exception of Evening over Rooftops, I think most of the new songs were better received. So satisfying for me to know that like back in the day, when the band did represent a section of people still now I carry that forward for people by singing and talking about the issues of today.

Later a jam session developed and I guess I just had to have a play with the man with the five string bass. So cool!. 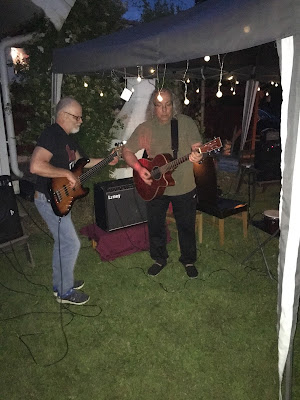 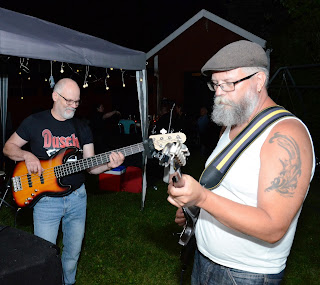 I'd had a special time. I must thank every one for their warm hospitality and consideration. Special thanks must go to Johan and Alf for inviting me over but every one I met was so kind and welcoming and I am sorry that I could not possibly list them all. 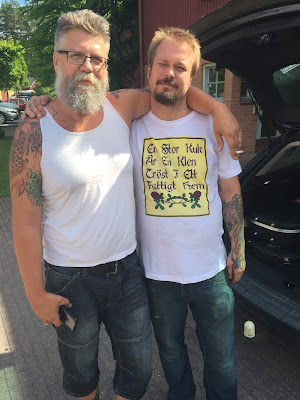 I will always remember my very happy days in Sweden. I hope I might return one day to hook up again with my new friends.

Next week I am off to Norway to play a public gig and a FDPFAFDW gig then a week later I go back for two more shows with Luke. Life is good and summer is here at last.

Posted by edgar broughton at 17:08

It really was one of the greatest times of my life. You have so much to good things to say. You are One of the greatest people i ever meet.
I really hope we can se each other again. If not here maybe on å gig in gb or norway.
Thank you again for a wonderfull time.
Kind regards Alf

It was a very very good afternoon in Gunnars, Sweden✌️
Me 'n' Ann-Sofi Will never forget it✌️
I got a lot of good pictures✌️ As you now ✌️

hello edgar
thanks so much for some absolutely wonderful days with you, a memory for life . I 'm glad you enjoyed your stay with us in Sweden . it has been so very warming and pose tive comments from everyone who has been involved . all welcome and hope to see you again soon ;)
Regards
Johan

Hi Edgar
It was a wonderful moment in my brothers garden listening to your fabulous music, I am not religious but it was some kind of hallelujah moment with the music that you have created in focus.
I really appreciated it and thank you!

Hey guys. I am very touched by your very kind comments. I had a blast. Thank you for every thing. We'll keep in touch.

Hey Edgar,
Next time I'll be more polite and show you around my fishing grounds.
Anyway thanks a lot for an excellent evening and nice chats.
All the Best,
Micke