Paraschiv Tony, myself and Trude giving it max after the show

What can I say about the trip that took me the furthest north I have ever been?  It is difficult to sum up the good times I had there with some of the loveliest folk I have met since I embarked on touring my solo show.
It is a two hour flight to Oslo with a two hour flight from there to Alta which nestles between the mountains and fjords.  The problem is the four hour wait between flights. The scenery during flight from Oslo to Alta is stunning. You would be hard pushed to find wilderness like it anywhere in Europe.
I was met at the airport by Tjere Ramstad who runs the club Galleri. I liked him immediately and soon I discovered why. This is a man committed to providing quality entertainment in Alta and he has a vast knowledge and understanding of the music of our times. He has a large command of the English language and so the discussions and debates began.

This is the  Lappish zone. The Sami live a short distance away. The light is wonderful with little darkness but it was much cooler than I thought it would be. The population of Alta is around 20.000 and it is a big town by local standards.  By coincidence the Arctic Tour bike race, which I usually watch on TV, came through town but I opted to hang out and rehearse bits of songs I planned to play for the first time in a long time.
I have to thank so many people for their kindness but it was Trude and Per Rane who welcomed me in their home first and where I stayed, except for one night after the Saturday show when I stayed very late at the club.  Per Rane plays a mean blues harmonica and Trude has a very sweet fragile singing voice. Per Rane's Halibut soup was northern gourmet food of the highest order. I like to eat any kind of sea food and though this kind of fresh fish meal is probably usual fare for the locals in Alta, to me  this was very special. Reindeer was also on offer and that was also a special treat.

On the Friday I went down to the club Galleri for a sound check and saw the town for the first time.  The whole place built mostly with wood was burned to the ground by the occupying German troops in World War two. People were forced from their homes and ordered to travel south. Consequently the town is modern and not to the taste of many locals I spoke with. Personally I like it. It has a functional quality and is laid out much like I imagine a colony on the moon might be.
This is the place where the German battle ship Tirpitz was sunk in a nearby fjiord.  If you are interested in modern history check out 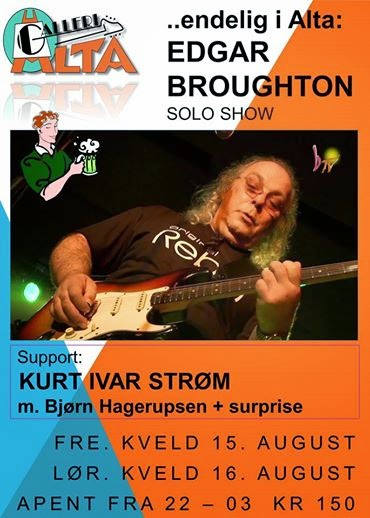 The club Galleri is in the central part of town where my shows were part of a large festival taking place right in the town centre. Several stages with large PA systems were pumping out all kinds of music all day long and into the night.
As I walked into the club for the first time I was met by Daniel the club doorman with the warmest greeting and handshake. Daniel is a wise man from Nigeria and the kind of guy you would definitely make room for in your lifeboat. ( regular readers will know what I mean). later I watched Daniel deal with difficult customers. He had a kind and considerate approach but it was clear he would be very able to deal with anyone who was unable to get his clear message.

Two really nice guys, singer / guitarist Kurt Ivar Strom and Bjorn Hagerupsen on bass, were my support act. Kurt Ivar is legendary in these parts for, among other things, being the man most responsible for evangelising on the EBB back in the day. He played EBB material and turned a lot of people on to our songs. Evening over rooftops is like a national anthem in this area of Norway. I can't tell you how many people said it was their favourite all time song. It gives me a warm feeling to know that we were so much a part of people's lives and for such a long time.

The club was packed when the guys hit the stage at around mid night. The crowd were very drunk for the most part and very noisy. The guys ran through their set of well chosen covers. It went quite well considering no one was really listening. To make matters worse the pa system was not working well and I struggled at times. There was no point in my usual story telling. Eventually I got to what I later called " THE SONG" and played Evening over rooftops. Job done after a fashion. Some of us stayed late after the Friday show and Tony who works in the club decided to sing some karaoke followed by Trude.  I joined in with some backing vocals and then Trude and I performed some yoik together. I loved that duet as much as anything during my time in Alta and we did a repeat performance for friends back at Per Rane's and Trude's house, very late in the night. Outside the sun shone dimly through the gloom in the mountains that signalled a change in the weather and the coming of a long winter.

I prayed the following evenings concert would not be a repeat performance of Friday. I had come a long way to show off my stuff so I hoped for better on Saturday. Terje got a couple of PA guys to look at things next day and soon everything sounded fine. Marcela, lovely wife of Terje, buzzed around looking after every one and soon it was time to roll.
We played earlier than on Friday. Kurt Ivar and Bjorn played a cracking set. Kurt Ivar manages to choose songs to cover that really suit his voice and so he makes the songs his own, almost as if he had written them. They rocked. Great!

I was soon having a great time on stage. People listened to my songs and stories and it all went well.  They were a lovely audience and they made the gig special. I finished with " THE SONG " (EORT) played my little outro, a variation on my intro, and that was that. I left the stage with the sound of the crowd ringing in my ears. What a great night!  I hung around for a long time after chatting and drinking copious amounts of cognac, filled with good energy and high as a kite. It was very late and time to go. I was offered a bed for the night with Roar and Mary Ann Olsen. They live in a beautiful wooden house by the fjord.  Mary Ann is a very talented painter from the Philippines and has her work exhibited in the club Galleri where she works behind the bar with Tony from Romania  and Anastasia from Russia. This is an international family. I was so surprised when Roar offered to buy one of his wife's paintings for me. I was very touched by this and I look forward to it arriving here. thank you so much for that guys.
Mary Ann's work was evident in the room I slept in where her organic decorating work on the walls was still a work in progress. I woke to a a very welcome breakfast of noodles and eggs and a view of the fjord to die for. It was a beautiful sunny day.

Later that day Terje, Marcela and Toni took me to friends where "Grill Master" Paraschiv Tony  made splendid barbecue. It was another very nice evening with lots of happy chatter and warm hospitality.
Next day it was departure day. It is always good to come home to the UK but I really felt a little sadness when leaving Terje at the airport to check in. The good thing is that we have plans for the future and so I am sure we shall all get together again one day soon.


Thank you to everyone who made this trip so very special for me - Terje and Marcela Ramstad, Per Rane Moland and Trude, Brita ,Ole Anton, Roar and Mary Ann Olsen, Håkon Johansen Tom Tangen, Hallgeir and Bente, Rita Heitmann  and Rolf Erik,  Paraschiv Tony, Daniel and Anastasia.

peace
Posted by edgar broughton at 22:04

It was a great pleasure to get to know you. Your music has been a part of my life since I was a teenager. Thank you for good conversation and good company. Hope we meet again someday. Thank you ... Sincerely Brita

Thank you for everything Edgar! This was my greatest holiday ever!See you soon! Best regards, Paraschiv Tony.

From Terje Ramstad:
Dear Edgar, it was an unadulterated delight for us all to have your full attention and companionship for a whole week in Alta, Finnmark (Northern) Norway.
Let's grab the first possibility and do it again; save from me leaving the sound up to fluke (as I naively did on the first night).