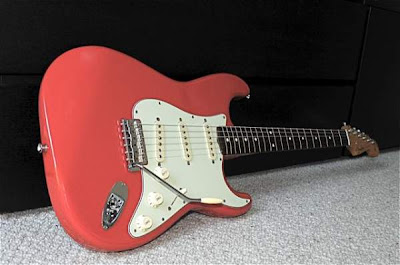 1962﻿
﻿I first saw her one sunny Saturday afternoon in Royal Leamington Spa. She was as beautiful as summer and I immediately fell head over heels in love with her. The classic American beauty stole my heart and I had to have her.

I had just purchased a second hand Hohner Telecaster in Sunburst from Rentons in Leamington just opposite what we called the bridges. This was where the grand Georgian buildings gave way to a more recent Victorian and Edwardian architecture. It was the rougher part of town.

Mr Renton, as we up and coming twangers called him, was a true gent. Yes, he ran his business much like others but he had a real feel for the needs and circumstances of his customers. Not once did he seem put out by the young bloods with their ever growing locks, even when we filled his shop on a Saturday afternoon to chat and admire his stock. It was the best music shop for miles. There was another music shop around the corner but it wasn’t funky and it never had the selection of most wanted guitars that Mr Renton had. Previous to the Hohner Tele I had a shorts scale Futurama in their version of Fiesta Red. I loved it and of all the guitars I’ve had it is one I wished I’d kept.

Any way the Tele seemed a better buy so I traded the Futurama in for it. Two weeks later the love of my life appeared in Renton’s shop window. She was so evocative of the time. Red and gorgeous with a strange extra switch to combine pick ups. Not so long ago I asked my guitar man if he thought it should be replaced or even removed. He looked at me in horror and shook his head gravely. “Leave everything as it is” he pronounced.

Back then images of the 1962 Fender Stratocaster filled my head so that at times I could hardly think of any thing else, except Howling Wolf and girls.The sleek looks of the American beauty with the patented body cut away convinced me I had to have her.

My dad had the metal bridge cover of the Tele re-chromed at his work place. Because of this the very kind Mr Renton allowed me the full price back against the Strat. In the end I paid £50 for her. It was a good investment though that wasn’t a consideration back then. Now even after yours truly has bashed her against Marshall Stacks, played her hard for 40 years and had her re-finished twice, she is worth thousands. I’ve toyed with the idea of selling her and buying a couple of new Yank Stratocasters but it would be a wrench.I used to lean the strat some where in my bedroom so that it was the first and last thing I looked at before sleeping and waking. Yes! I was obsessed.

This was the model of guitar that Hank Marvin played and later Jimi Hendrix and a long list of axe wielding luminaries. Many years later I was to meet Hank at Abbey Road Studios during the mixing Of Apache Drop Out. He found the whole thing very amusing and told me he would have lent me the echo unit he used on Apache if he'd known about the project. Unfortunately the very great Jerry Lordan who wrote Apache hated our mash up of Marvin and Beefheart. Later the track would be re-released on a magazine sampler of “mash up” tracks. It was labelled the very first of it’s kind.

This guitar was played by Eric Clapton at the Round House in Chalk farm London. It was a jam session after our gig there. I remember my mum grabbing me by the arm and asking me “Who is that guy playing your guitar”? I think she thought he hadn’t even asked, which of course he had. When I told her who he was she let it go. I had visions of her jumping up on stage to snatch it from him. She was quite capable of doing it.

Years before the band moved to London some of the guys brought John Mayalls Blues breakers back to our house in Warwick after their gig in Birmingham. I was in bed and the guys woke me up to announce we had V.I.P. guests. After break fast Peter Green tuned the action on my beloved axe. He was so nice and very helpful. Years later our paths would cross at Buxton Festival and others. Later that week Vic Unitt, our guitarist suggested that our name, The original Road Runners, was old hat. It was decided we would now be The Edgar Broughton Blues Band.


The current livery of the 1962 Strat was painted by Dean Colman a graffiti artist A.K.A. Zeus. Dean is now regarded as an important international contemporary artist. I was Dean’s youth worker for about three years. 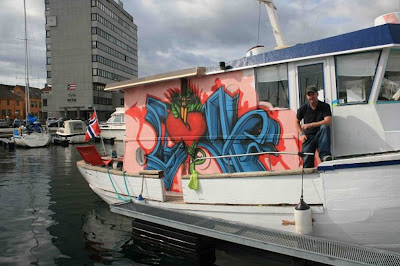 Dean on a boat he painted in Norway 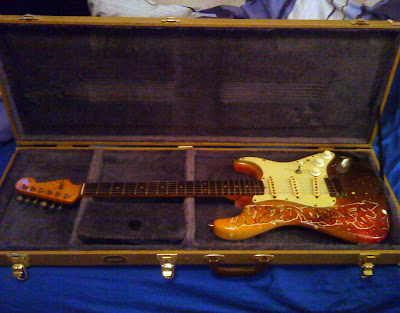 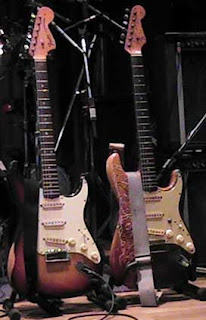 1971                   1962           ﻿
So what are the qualities that gave the vintage Red Fiesta Fender Stratocaster it’s allure? The sculptured body is unique and anatomically perfect. The pick ups were hand wound by Leo Fender or one of his disciples. The patented tremelo offered a wide range of possible pitch bending opportunities. It stays in tune reasonably well. Most important of all it has a very versatile range of tone possibilities. From Marvin to Hendrix the sounds it can produce seem almost infinite.
This guitar featured heavily in the contemporary music of those days. The great guitar driven songs and instrumentals that were beloved of Fun fair goers and coffee bar cowboys was the soundtrack to my teenage life. This was a time when all of my school exercise books had a drawing of a Fender Stratocaster on the cover.
I have played many different guitars over the years but I always feel properly dressed when I have a Fender Stratocaster hanging around my neck. My 62 Strat has been a good servant and still is though she is retired except for very special occasions.
Recently I bought a Cliffy Biro, (I know that is not their name), Simon Neil Signature Strat in fiesta red. Can’t say I like their tunes much but the guitar rocks. It’s a Squire version of the great marque, I do love a bargain and at £260-00 it is a snip. She looks beautiful with aged fittings and superb electrics and plays well straight out of the box. I won’t have to worry about taking this guitar on the road where as taking my vintage Strats on the road is a big risk.

http://www.fenderstratocasteronline.co.uk/squier-stratocaster-simon-neil-biffy-clyro-signature-guitar/
I am planning a trip to Leamington later this year to meet up with some old mates for a jam around new material. I am planning a show in the area called Bring it on home after the Sonny Boy Williamson / Brownie McGhee song, if all goes well.
I shall take the Squire Strat to visit the place her big sister came from and to fill my old stamping ground with the Fender Strat sound of yours truly.
http://home.provide.net/~cfh//fender.html
____________________________________________ 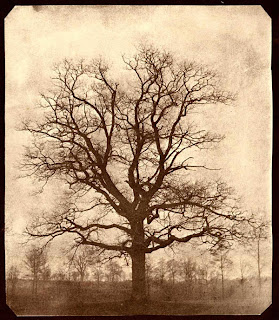 what a nice story,nice to here some history about the guitars some cool names in there to particularly like the peter green reference what a player he was great insight into that era keep them coming.

what first attracted me to the EBB all those years ago was your voice, it was'ent untill the last few years when i got to see you play live that i really saw how good a guitar player you really are!and as much as i agree with most of your political views its really the music of the EBB and Rob Broughton that do it for me!oh by the way you still got that VOICE man!

Very nice to see how you remember "the good old days back home".Brought back memories for me and I suspect many others. Thank you. I lived in Kenilworth and remember a gig at the Pumproom. Never saw any thing like it before and we knew you were destined for greater things.
All the best Edgar
Jacko

Lucky man with memories and the guitars to go with them. Love the new site and where did Shamen Calling come from? Great Heavy song.

Nice story indeed. Looking forward to our Fair days pay gig and to meeting you after all these years.
Hi Jacko we're in Kineton.
Mel and Sam.
x

A nice little piece of rock history. Memories of youth and starting out. Excellent!
Angela
x

I got a warm feeling reading this.
x

Dear Rob, I have had the same conversation with guitarists that I have met over the years and most of them fail to understand that, to the fans, they ARE the guitars that they played during the best years of the band. As an example, Del Bromham of Stray has dozens of guitars, but the tone of his 1972 Gibson Firebird is unique, so, when he plays the old songs, this is the only guitar to use. To me, you are the Strat man, especially the Edgar Broughton Band painted Strat - how many gigs did I go to and see you play your old strat? I hope that your 1972 strat continues for a long time, so play it. Remember,even a Stradivarius will die if you dont play it.When I go to the Ashmolean Museum in Oxford it pains me to see the Stradivarius in a cabinet, which is dead. If you played it, it would not play properly.
Much peace to you
Oz

I suppose you will have to re-write homes fit for heroes again....the Con Dems at the rudder, it makes me want to cry.
If you use that line I want royalties lol

(ps after years of trawling the second hand shops I finally got my vinyl copy of inside Out!)

I am also from Leamington and have very fond memories of Rentons music shop. I used to go there to practise before I have saved enough to buy my own guitar. When he closed he gave me the old knackered acoustic he used as a shop window display. I rebuilt it and still have it. its a 1958 Hofner Congress. He was (and hopefully still is) a fine human being ....

I have to agree with Oz, that musicians have their own favourite instruments. Brain May built his "Red Special" with his Dad Harold, from an old fireplace as the teenage Brian couldn't afford to buy a guitar c.1964, but it was that guitar that really gave Queen their unique sound. Keep the 1962 Strat Edgar, you'll regret selling her. I gather my guitar , it's only a £110 Fender acoustic, but those who have played it like it. Only problem is my friends who do play are in Warwickshire or Wiltshire so that's 60 to 100 miles away. Did join a local guitar group, it said it was for all abilities, but haven't been for a number of weeks now as they play along together and I don't feel I'm learning much, so unfortunately my guitar seems to stay mainly in it's case, last time it was out was Tim's birthday , (see most recent blog entry)> I'm glad Edgar that you play your F's the same as me
Galadriel